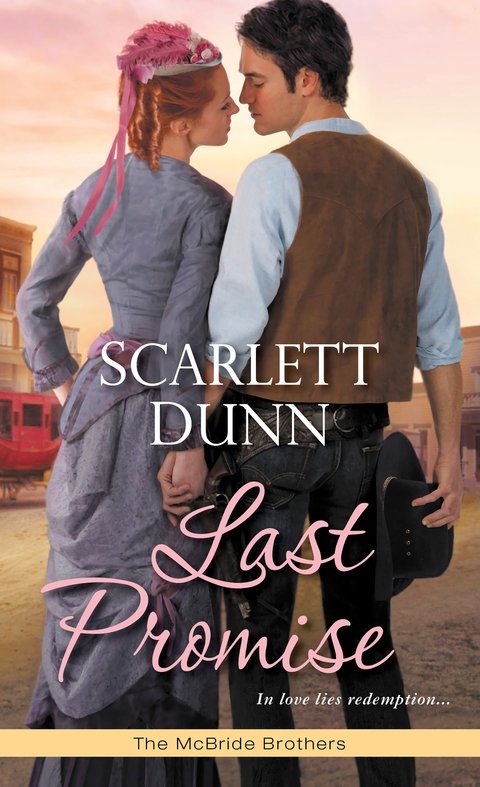 FIRST KISS
The music stopped, but Luke still held her in his arms as they stared at each other. In those few seconds, Luke knew something changed, and he knew she felt it too. He'd been ready to shoot a man over a dance and he knew why. He wanted her. Taking her by the hand, he led her through the throng of people and he didn't stop until he reached the back of the church. Once he found the most secluded area he took her in his arms.
“You're beautiful in the moonlight,” he whispered, cupping her face in his large hand.
Mary Ann's heart was thumping loudly, and she quickly forgot all of the reasons she wanted to stay away from him. His arms tightened around her, crushing her to his chest and she couldn't think of anything other than how good it felt being so close to him.
When he lowered his lips to hers she didn't resist . . .
Books by Scarlett Dunn
PROMISES KEPT
Â
FINDING PROMISE
Â
LAST PROMISE
Â
Â
Published by Kensington Publishing Corporation
Last Promise
SCARLETT DUNN

Better Than Safe by Lane Hayes
Unthinkable (Berger Series) by Brayfield, Merinda
He Shall Thunder in the Sky by Elizabeth Peters
What If? by Randall Munroe
To Challenge the Earl of Cravenswood (Wicked Wagers 3) by Bronwen Evans
Indulgence by Mahalia Levey
Wicked Secrets by Anne Marsh
As Lie The Dead by Meding, Kelly
Spellbound by Cate Tiernan
Glad Tidings by Debbie Macomber