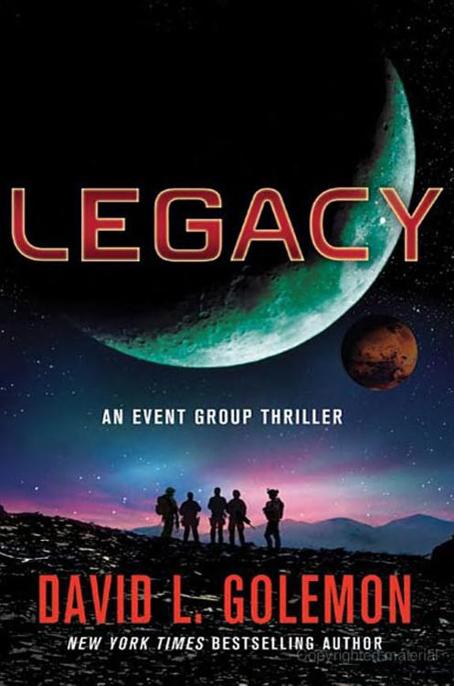 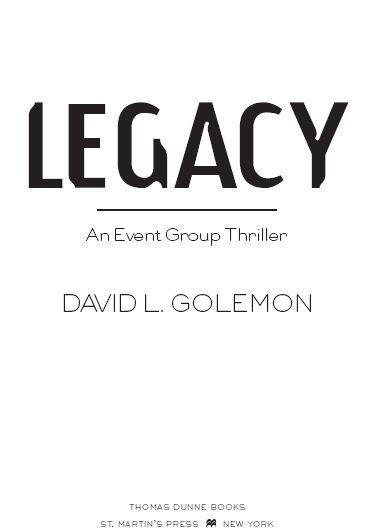 And also to the astronauts and cosmonauts the world over who have given their lives for the chance to make us a far greater species than we are—we will always need heroes!

To a brilliant British author and one of the more intelligent writers of any genre—James P. Hogan personified science fiction and gave it a human face. And he was right; we have a chance to inherit the stars. Let’s not blow it.

Legacy
has been my most challenging novel to date, simply because it involves something close to the heart of this author—the space program.

As there are close to twelve hundred men and women who offered their expertise on the future of space travel, I found it impossible to single them out one at a time without my editor and publisher complaining about the length of the book; that is how many pages I would have to add just to thank everyone who assisted me in the technical details of this novel. Suffice it to say I would have been lost without the valuable input of some of the most amazing people at NASA, DARPA, and the defense department.

There is one thing I want to add on a more personal basis—we have to continue our endeavors in the arena of space—without that challenge we will wither and die as a people. We are explorers, so let’s get back to exploring—it’s what we do best above all else.

Prologue: To Gaze into the Face of God

Part One: The Killing of Innocence

Epilogue: Genesis According to Columbus

TO GAZE INTO THE FACE OF GOD

The old shack stood in stark contrast to the gleaming new structure that towered over it. The larger structure, a two-story house, had been built at great expense following the gold strike in the Superstition Mountains two years earlier. It had been occupied for exactly seventy-two hours before the old man and his houseguest decided it just wasn’t their style to live in such opulence. Much to the consternation of the military police and the security team that patrolled the property at the base of the mountains, Gus Tilly had moved back into his original shack along with the small being who had become his closest friend. The one-room shack had been repaired and a few creature comforts, such as new lamps and two new beds, had been added, but other than that the walls still leaked cold air in the winter.

Gus Tilly’s net worth was something in the neighborhood of $160 million according to close government sources, but he still worked by himself at the Lost Dutchman Mine with occasional help from his houseguest and the young man who lived in Chato’s Crawl. The boy in town was named Billy Dawes and he could only assist Gus on the weekends and holidays now because of his college schedule—a schedule that was paid for by the proceeds from the mine.

The Lost Dutchman, discovered by accident in 2006 during the incident in the desert, had been bestowed on Gus by the U.S. government after his assistance in that event had been deemed invaluable, but that wasn’t the reason for the massive military presence that guarded not only the mine but the shack and the empty house as well. The real value of the property was the creature that Gus watched over. Tilly had sat with his friend for hours at a time during the ten thousand hours of debriefing by other friends based many hundreds of miles away in the desert sands beneath Nellis Air Force Base, Nevada. Four years’ worth of valuable intelligence, covering a period that had begun in the time of Harry Truman and ended in a battle that had claimed hundreds of lives in 2006.

The existence of this small being was known only to a few people. He was referred to by the code name he had been given as part of the highly classified Operation Case Blue. Mahjtic, or Matchstick as he was nicknamed by Gus, was the most valuable and precious being the world had ever known. Only the president of the United States, the chairman of the Joint Chiefs of Staff, and an organization known as Department 5656 knew of his existence—an existence that provided the intelligence that would assist in safeguarding the world from a threat that had been coming for many generations, beginning one stormy night in 1947 in a small town in New Mexico named Roswell.

Gus Tilly rolled over on his oversized bed as he heard the whimpering sound coming from the child’s bed to his left. He raised his head and looked down at the small creature lying restlessly beneath the thick covers. Mahjtic kicked at the blanket that had been draped over him, his movements violent at first, then gradually slowing. The Mickey Mouse night-light that Mahjtic loved glowed softly in the wall socket only a foot away from the small bed. The old man watched as Mahjtic’s large green head and small hands and feet became still, but in the dim light he could see that his large slanted eyes were working beneath the almond-shaped lids—the small being was dreaming, an extremely rare occurrence that only happened when Mahjtic became aware of the enemy known as the Grays.

Gus was just about to lie back down when Mahjtic sat bolt upright in the bed and began screaming, kicking the covers free of his small body. He pushed himself into a sitting position and stared wide-eyed at the far wall of the shack. Gus’s heart raced as he saw the terror that filled those large, obsidian eyes. He jumped when the front door opened and two men came into the one-room house with nine-millimeter automatics drawn. They looked around and saw that all was still except for the otherworldly screeching of the small being they were there to protect. They looked about as if they had no idea what to do. The first plainclothes soldier reached for the light switch.

“No!” Gus hissed. “No lights. He’s dreaming. He’s still asleep.” The old man tossed his own covers away and eased out of his much larger bed. The two security men watched as Gus lowered his eighty-four-year-old frame next to the small bed and took the creature’s hand. They all noticed that the cowboy-and-Indian pajamas that Matchstick wore were soaked through with the tiny being’s perspiration. “Hey, old boy, wake up,” Gus said as he gently patted Mahjtic’s small, long-fingered hand. “You’re having a doozy of a nightmare.”

Matchstick was shaking and his eyes were still focused on the far wall, or on something far beyond it that the men couldn’t see. Outside the shack’s thin walls the winter wind blew cold against the aged wood and made a moaning sound that didn’t add any comfort to the strange situation.

Mahjtic blinked and then screamed once more. It was a piercing sound and something that Gus hadn’t heard since 2006. Mahjtic was terrified.

“Oh, shit,” the tallest of the security men said. “Should I get a call into Director Compton?” he asked Gus.

Gus ignored the question, instead placing an age-spotted hand against the soft green skin of the alien’s cheek. “Come on, old boy. Come back to Gus, I ain’t goin’ to let nothing get ya.”

Finally Mahjtic blinked. A large tear rolled from his right eye and soaked quickly into the yellow pajama top. He blinked again and then his eyes opened wide and settled on Gus’s craggy face.

The eyes of the small creature drooped as they took in his friend’s features. He placed its hand over the old man’s.

The old man’s heart froze in his chest. He knew exactly who “they” were. He closed his eyes and nodded his head. “I thought it had something to do with those bastards.”

Gus opened his eyes and saw that Matchstick was again staring off into space. “What’s that?”

Gus turned toward the man who had spoken earlier. “Get on the radio and get Director Compton out here. Tell him to hurry.”

The two men quickly left the shack and disappeared into one of the six trailers that circled the two houses.

“Now, tell me what’s so important about the Moon, and then we’ll talk about those other fellas that are coming.”

Mahjtic moved his eyes and looked at Gus once more. The shaking had stopped and in the dim glow of the Mickey Mouse night-light Gus could see Mahjtic trying to focus.

The war had lasted exactly three years, two months, and twenty-one days and had ended civilization as they knew it. Never again would the voices of children at play be heard, or those of men and women expressing thoughts or feelings of love.

Now the last desperate hope of their species had dwindled to a small outpost on a moon orbiting a hostile world—a blue, volcanic planet with a shifting crust and so harsh an environment that even their enemies wouldn’t want it for millions of years. The moon orbiting this explosive and angry world had once had a larger twin, and that had been where the last hope of the people had been found. Their salvation had been an ore of amazing quality and properties. It had been mined, smelted, and turned into the magical energy needed to fight the invader. This great moon, where the powerful ore had been found, was now gone. Its sudden, system-wrenching death had taken with it the hope of an entire civilization, causing a home world of red sands, green oceans, and emerald skies to be voluntarily reduced by its own people to a dead and drifting planet with all traces of life erased from its face forever, and the survivors had found that there is no honor in death—just death.

The Girl in the Red Coat by Kate Hamer
Double Cross by Stuart Gibbs
Beautiful Freaks by Katie M John
Puerto humano by John Ajvide Lindqvist
Love to Hate Her by Lorie, Kristina
Who Invited the Ghost to Dinner: A Ghost Writer Mystery by Teresa Watson
Dead on the Vine: (Violet Vineyard Murder Mysteries #1 (A Cozy Mystery)) by Harvey, JM
Free Falling by Susan Kiernan-Lewis
This House of Sky by Ivan Doig
The Ooze by R.L. Stine