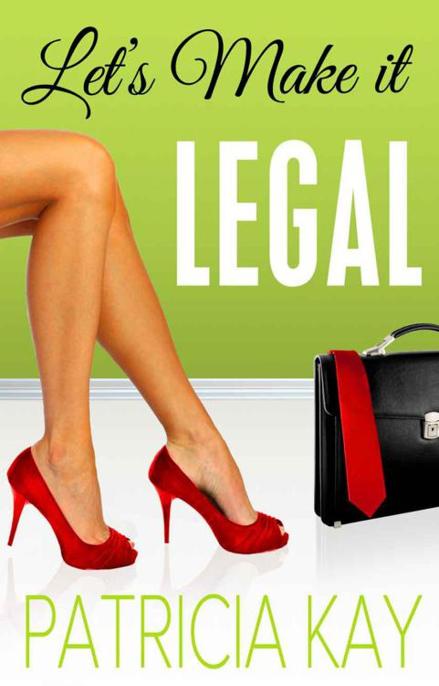 No part of this publication can be reproduced or transmitted in any form or by any means, electronic or mechanical, without permission in writing from Patricia Kay.

A note from the author . . .
Hi!  This book was originally published in print in 1994.  I don't know if cell phones existed then, but I do know that they were not in general use.  So when you read LET'S MAKE IT LEGAL, you'll see that Sydney and John don't carry cell phones and don't text or have instant communication with their offices and their e-mail accounts.  You'll also notice the difference in the way we fly, because in 1994 9/11 hadn't happened.  Loved ones could go to the gate and see you off or wait at the gate to greet you when your plane landed.  Those familiar with pro football will notice that the Oilers are mentioned in the book, whereas today the Houston pro football team is the Texans.
I elected to leave the book the way it was written and only make editing changes when the story's plot line was affected.  I think it's more fun to see the way things have changed in the intervening years.
I'm thrilled to be able to offer this book to my readers, both old and new, and I hope you'll enjoy it.  Houston is my home and one of the things I love about this book is the way I was able to present the city I love.
At the end of the book there are a couple of excerpts and links to other e-books of mine.  I hope you'll look for them.
Enjoy and let me hear from you.  I love to "talk" to readers.
Warmest wishes,
Patricia Kay

Sample: Prologue of With This Ring

"You’ll
have
to go, John. There isn’t anyone else we can send. ”

“I’m deadly serious. What else can we do?”

“There’s got to be someone else,” John insisted.

Janet shook her head. “There isn’t. Come on, John, you can do it. After all, you used to be a lawyer.”

“Yes, I know, but they’ll be getting a bargain and won’t know it.” Janet sighed and pushed her mop of dark curls away from her face. Her normally cheerful expression had been replaced with a worried look. “We sweated blood to snag Folger & Hubbard, and you know their biggest concern when they signed with our agency was whether or not we’d be able to keep up with their demand, especially during emergencies. If we tell them our last available paralegal came down with the flu, they’ll call another agency. And then we might lose them permanently. Are you prepared to take that chance?”

John knew Janet was right. Their agency was only eighteen months old and still not as solidly grounded in the Houston legal community as they’d like it to be. The two of them had worked their butts off to build the business they now had, and losing their most valuable client would be a blow they didn’t need. Sometimes he wondered why he’d ever thought going into the legal temporary business was a good idea.

Janet’s expression relaxed. “Who knows? You might even enjoy yourself.”

John grimaced. “I wouldn’t go that far. But it ought to be interesting—working for The Shark.” The Shark was one of the nicer names their temps had assigned to Sydney Scott Wells, one of Folger & Hubbard’s fast-track lawyers and the agency’s most exacting and hard-to-please client.

Janet frowned again. “I just hope she doesn’t get upset about this. You’ll be particularly nice to her, won’t you, John?”

“I’ll be so nice our own mother wouldn’t know me.” He removed his suit jacket from the closet and put it on. “You’d better call her secretary and explain about the substitution. And you’d also better explain that I’m going to be late.” He glanced up at the wall clock, which read 8:05. Jo Whipple, the temp who had called in sick, was supposed to report to work at Folger & Hubbard at eight o’clock, but John figured he’d be lucky to make it by eight-thirty. “Oh, and what about the kids? Can you pick them up after school?”

Sydney Scott Wells tapped her gold pen against the glass-topped surface of her desk. Honestly! Of all times for Gerri to get sick, this week was the worst. Sydney was buried up to her eyeballs in work and had planned to spend the day in the War Room with her team. There were a million things to do to get ready for the Montgomery case, which was set for trial on Monday.

She rubbed her temples. She didn’t have time to hold hands with a new paralegal who wouldn’t know where anything was, who wouldn’t be familiar with her cases and who probably wouldn’t be one-third as good as Gerri, anyway.

Sydney eyed the stack of files on her desk—a stack that seemed to grow taller by the hour. She was already putting in twelve to fourteen-hour days, six days a week, and it looked as if she’d have to increase her hours if she wanted to have a prayer of keeping up with her caseload.

She grimaced. She had hoped to be able to get away for a couple of days now that the weather had finally cooled off. It was late October, her favorite time of the year, and she’d thought about going to San Antonio to visit her best friend from law school days. She sighed heavily. She’d have to scratch that idea, she guessed, at least until this trial was over.

For a moment, Sydney considered passing a couple of her less important cases off to one of the younger attorneys, but as quickly as the thought formed, she dismissed it. As tempting as it was to lighten her own load, she couldn’t do that.

The kids depended on her. They trusted her, and many of them had never been able to trust an adult before. Most of them had been betrayed by adults all of their lives. She could not betray them, too.

She massaged her forehead. She was just tired, that’s all. And disgruntled because this was the third time in as many weeks that Gerri had had to go home sick. Frowning, she punched her intercom. “Norma, come in here.” Less than a minute later, her secretary rushed in.

Norma winced as if Sydney had struck her. “N-no, not yet.”

Sydney wasn’t sure which exasperated her more: her secretary’s scared-rabbit expression or the tardiness of the temp. “Didn’t you tell that agency when you called them yesterday afternoon that whoever they sent today needed to be here at eight o’clock sharp?” she said crossly.

“Yes, of course I did,” Norma answered, her voice strained. “M-maybe she got lost.”

“Lost? Gee, if she can’t even find the building, that certainly bodes well for the day, doesn’t it? Good grief! Couldn’t they send us someone who’s at least
been
here before?”

“It was such short notice, Miss Wells—” Norma pleated her skirt in a nervous gesture that added fuel to Sydney’s irritation. “She’ll be here. Temps are often late their first day.” Norma’s voice gathered strength as she seemed to muster her courage. “Sometimes they misjudge how long it’ll take to get somewhere new.”

“Well, send her in the minute she shows up,” Sydney said, resisting the impulse to add her observation that if Jo Whipple didn’t have the good sense to check out where she was going and how to get there in advance of the assignment, Sydney didn’t have high hopes for her ability to do the work that needed doing.

Instead, she rooted through the files cluttering her desk until she found the one she wanted and began reading. When she glanced up again, Norma was gone.

Twenty minutes later, the temp had still not been shown into Sydney’s office. Sydney threw down her pen and after glaring into space for a minute, got up and marched outside to Norma’s cubicle.

Norma stood talking to a tall, dark-haired man in a well-cut gray suit. She was smiling in that way women smiled when the man paying attention to them was good-looking or sexy or both. “I’m glad you finally got here,” she was saying, her green eyes all bright and shiny. “Miss Wells has been waiting—”

“Th-this is the new paralegal,” Norma stammered. “Joe Whipple. Mr. Whipple, this is Miss Wells. You’ll be working for her today.”

She’d been right, Sydney thought. He
was
good-looking. Sexy, too, with a long, lean face and high-bridged nose. He had intelligent brown eyes that met her gaze squarely and without a flicker of apology for his tardiness.

He extended his hand, the beginnings of a smile hovering around his well-shaped mouth. “Hello, Miss Wells. Actually, I’m not J—”

“You’re late.” She ignored his hand and gave him her frostiest glare. Did he think she’d be bowled over by his charm, thereby excusing his tardiness?

“I don’t care to hear your excuses. We’ve got too much work waiting to be done to waste time with excuses.”

His eyes hardened, and now they
did
flicker, but not with apology, and Sydney knew he was angry. Well, wasn’t that too bad? For a moment, she thought he was going to say something else—she almost wished he
would
say something else—because she still had anger to vent, but he must have thought better of it, because he simply looked at her.

“I go to trial on Monday,” she added. “We’re using seventeen experts. What I want you to do today is call each one and make sure they’re prepared. They’ll have to be on call all week.”

Sydney turned to Norma. “Norma, have you finished the Carlson brief yet?”

“It’s printing now, Miss Wells.” Norma’s eyes were wary as she looked first at Sydney, then at Joe Whipple.

“Good. Bring it in as soon as it’s ready. Come with me, Mr. Whipple.” Sydney strode into her office. She could hear him following her. “Shut the door behind you.”

“All right,” he said. He lifted the stack of files, then sat opposite her. His brown eyes met hers.

“How much experience do you have, Mr. Whipple? Or do you prefer to be called Joe?”

Something glinted in the backs of his eyes. “I have over fourteen years’ legal experience. And I prefer to be called John.”

Sydney frowned. “I thought Norma said your name was Joe.”

“Yes, she did, but I’ve been called John all my life.”

Sydney shrugged. It was no skin off her nose if he wanted to be called John. As long as he could do the work, she didn’t much care what his name was. “Fine. Now, shall we get started?” She picked up a legal pad and handed it to him. “You’d better take notes.”

He took the pad and removed a pen from the inside pocket of his suit jacket, then settled back in his chair.

“Have you heard or read anything about Kara Montgomery?” she asked.

Raising his eyebrows, he said, “You mean the little girl who wants to divorce her birth mother?”

“Yes. As you can imagine, with a case of this magnitude, I want very much to win. But that’s not the only reason this is so important to me. Kara is a special child and I care about her. I believe she has a right to be happy and secure. Unfortunately, children’s rights have been abused and ignored for far too long.”

For the first time since John Whipple had arrived, there was an approving gleam in his eyes as he nodded his agreement. Sydney felt some of her irritation evaporate as she began to fill him in on the details.