Let's Play in the Garden 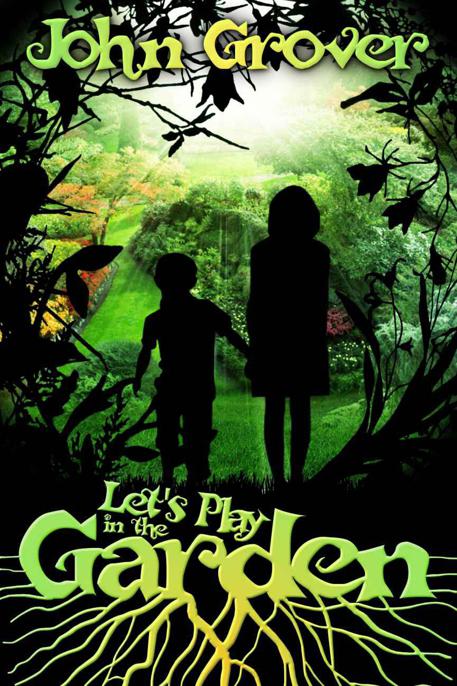 Let’s Play in the Garden

All characters, events and descriptions in this book are fictitious. Any resemblance to real persons living or dead are the product of the author’s imagination and are purely coincidental. All rights reserved. No part of this publication may reproduced or transmitted in any form or by any mean, electronic or mechanical, without permission in writing from John Grover.

Other Titles by John Grover

Frozen Stiff: A Zombie Novella.
The end has come. The dead walk and the living are on the brink of extinction. Brad and Travis, part of a military search and rescue operation, are re-routed to a secret base in the Canadian Arctic where evil colder than the frozen waste awaits.

Creatures and Crypts
–20 short stories, over 70,000 words of fiction. Come dance with the dead in the pale moonlight. The author’s best-selling collection.

Feminine Wiles
–These girls will set your nightmares on fire. They’re beautiful, seductive, fearless, and deadly. Will you resist when you hear their call? 16 tales of wicked women.

Terror in Small Doses
–6 flash tales of horror and the supernatural. Makes a great sampler of the author’s work. Lowest priced book.

Shadow Tales
–The author’s first collection now in its second edition. 15 tales of terror with an all new wrap around story and author’s notes on the stories. Published by Double Dragon Publishing.

A Beckoning of Shadows
–The sequel to Shadow Tales.  More horror with 16 stories of varying themes. Published by Naked Snake Press.

Space Stations and Graveyards
–Co-written with Eric S. Brown and Jason Brannon, a mega-sized collection of sci-fi horror, the supernatural and of course zombies! Published by Double Dragon Publishing.

Chapter 5: A Trip to Town

Chapter 8: A Day of Mourning

Chapter 10: The Birth of Merydith’s Plans

Chapter 14: The Dawning of Winter

Chapter 18: A New Year of Horror

Chapter 19: The Demise of Winter

Chapter 23: Root of All Evil

And The Lord God Took The Man, And Put Him Into The Garden Of Eden To Dress It And To Keep It. – Genesis 2:15

“By the good grace of nature do we exist and continue to do so.” – Simon Santaneen

What are you afraid of Merydith?

Merydith’s childhood had always been rather strange.
Where did I really come
from?
she often wondered. Merydith’s entire life had not exactly been what you would call normal. She lived in her grandparents’ home with her mother, Marion, and two younger brothers. Merydith was the oldest, then there was Tobey, and their baby brother Aaron. She never knew her father. To her it was as if he had never existed.

The house was nearly isolated, far from town on a deserted road. In order to get to the Santaneen home you had to take a turn down an unpaved pathway littered with rocks and dirt.

Merydith stood in the sun-soaked kitchen, her mind drifting as she filled the basket. She set delicate teacups in beside potato salad and added a few rose-colored napkins. She put the finished basket on a silver, oval-shaped tray. When she heard the soft whistling of the teakettle, she poured the hot water into the shiny silver teapot. All was ready as she placed the teapot on the tray.

“Tobey, Aaron! Lunchtime!” she called, and within moments the pair came racing down the stairs. They adored their sister like no other person in their young lives.

“That’s right, I wouldn’t have called if it wasn’t ready,” she said with a smile. “Merydith?” Aaron looked up at his tall sister. His face was aglow.

“Let’s play in the garden!” he yelled with glee and joy in his eyes.

“Why, yes, that’s exactly where we’re going.” There was sweetness in her voice.

“Oh, boy!” Aaron called out as he turned and made his way to the door.

Merydith picked the tray up in both arms and started for the front door. “Tobey, would you grab the door for me?”

With a skip and a jump, Tobey hurled himself over to the door and held it wide for his sister.

As they stepped out onto the porch, their feet clunking upon the weathered wood, they noticed Aaron already on his way to the garden. They followed him down a stone path into a lush, bountiful yard.

Their grandparents kept everything meticulously neat and perfect. The grounds were like the family’s very own private paradise. The house was a two-story affair with an attic and a cellar.

The cellar was Grandpa Simon’s workshop. He spent a great deal of time down there and was the only one ever allowed down: family rule.

A white picket fence surrounded the yard and beautiful flowerbeds filled in around the house, Grandma Gladys’s pride and joy. The real beauty, however, was within the backyard, Grandpa Simon’s ultimate accomplishment, his baby, his everything.

They entered a backyard that was home to a wondrous garden—a garden more magnificent than anything the family had ever seen. Nothing in the world came close to comparing to the awe-inspiring splendor that was the garden.

Grandpa Simon owned dozens of acres, and it sometimes reminded Merydith of a plantation, like many others here in South Carolina. The land went on to dense forest that was mostly unsettled, like pure wilderness. In the midst of the property lay a vast garden that was protected behind a stone wall. Atop the wall were many steel spikes to discourage anyone climbing over the wall. The only way in was through the wooden gate. It looked more like a door than a gate. The grandparents left it unlocked for the children to enjoy.

Aaron sat impatiently by the gate, tapping his foot. He was too short to reach the handle and had to wait for Tobey and Merydith to come and let him in. They all loved the garden, but Aaron seemed especially enchanted by it. “Hurry, Merydith,” called Aaron. There was a squeak in his voice and his curly brown locks danced in the wind. “Hurry, I want to play in the garden.”

“Now hold your horses, big guy,” Merydith said. “We’ll be in the garden in two seconds flat.” She turned and smiled at Tobey as he stretched out his suspenders playfully. “You can open the gate for us and then we can have a most splendid lunch.”

Tobey did as she asked. He flung the latch off its hinge and with all his might pulled the handle. The thick, heavy gate sighed as it eased open, a mouth yawning wide to welcome the children.

It seemed the garden had always been there. Merydith searched all of her distant memories and couldn’t remember a time that the garden hadn’t existed. It was here even before her younger brothers had arrived.

The three entered at the same time. That was the way it had always been done, and even though they visited the garden daily, the sight of it still left them awestruck.

It was simply amazing, huge and luscious. It was a miracle of the earth. Everything seemed so huge, larger than normal size, larger than they had noticed in other yards and plantations. Rosebushes, giant sunflowers, all kinds of trees that bore the biggest fruits anywhere…apples, pears, peaches, oranges. There were huge patches of watermelon, pumpkins, squash and many rows of lettuce.

The aromas and colors were dazzling, intoxicating, stretching a canvas of rainbow colors in every direction with sweet, natural perfume carried on the wind. It could leave you lightheaded if you weren’t a strong person.

Flowers of all types reached for the heavens. Rhododendrons, Azaleas, Lilacs, Crab Apple bushes, Violets, Lady Slippers, Lilies, Mums, Marigolds, almost every flower imaginable. Even poisonous plants grew in complete harmony with the rest of the garden. A collection of Hemlock, Belladonna, Nightshade, and Yew added to the mystery and magic that was the garden.

Other plants longed to be part of the bounty here. Trees grew wise and graceful, curling and twisting under the guidance of the sun…pines, weeping willows, spruce, oak, cherry wood blossoms, anything that had roots. Even animals moved in with the approval of Simon, of course.

Birds bathed and drank from the many marble birdbaths scattered throughout the garden. Old wells added charm to the garden décor, offering anyone the ability to draw fresh water.

Stone benches appeared here and there amidst the tranquility as if growing out of the land. They were perfect for leisurely sitting and admiring the surroundings.

Paths twisted and curled out of sight in every direction as if the children were walking through a forest instead of a garden. One could easily get lost here and possibly never be found. As far as the trio looked, they found no end to the garden. To them it simply went on forever.

The one thing that always puzzled Merydith was the extraordinary size of the plants and flowers. Nowhere but the garden did foliage grow so big. She found this both strange and fascinating. The boys couldn’t care less. Another family rule of the grandparents was that no one was ever permitted to pick anything from the garden. They were never allowed to eat any of the fruit and vegetables or ever to pick any of the flowers, no matter how pretty they appeared. Strangely enough, the animals seemed to live by this rule as well. No bird or squirrel was ever seen eating a fruit or nut.

“Well, here’s our favorite spot,” Merydith said as they turned to view the grand white gazebo that was their lunch site, standing stolid and regal as if built for the Greek Gods.

“Great, let’s go, I’m starving!” Tobey called as he ran into the gazebo.

“C’mon, let’s go, Aar—” Merydith turned to Aaron but instead saw him running off chasing butterflies around a cluster of bushes. His giggling made her chuckle as well, but concern still filled her. “Don’t wander off too far, Aaron. After lunch we’re leaving and I don’t want you to get lost on me.”

He called back with playful acknowledgement and then vanished behind some bushes. Merydith took the tray and joined Tobey.

Merydith set the tray down gingerly on the round table in the center of the gazebo. Tobey anxiously opened the basket and began to take food out.

Merydith took out the small cups and began pouring lukewarm tea. It was unusual for boys to take a liking to tea, yet for some reason, Tobey and Aaron did. It was a tradition Merydith had started long ago when they first started having picnics in the garden. She took out three paper plates and set them on the table as well.

Tobey took a sandwich wrapped in plastic wrap and set it on his plate—olive loaf smeared with plenty of ketchup, his favorite. He placed a sandwich on the absent Aaron’s plate. That one was peanut butter and jelly. What would anyone expect from a five-year old? The last sandwich he placed on Merydith’s plate was a tuna salad sandwich with diced onions, which she had prepared herself.

“You’re welcome,” he answered with a rather bashful nod. Tobey was more a gentleman at twelve years old than most adult men.

What a perfect day for a picnic,
thought Merydith as she started scooping helpings of freshly made potato salad onto the plates. She had learned all of these recipes from her mother, the greatest cook in the world next to Grandma, of course.

The two settled down to a very appetizing lunch. They weren’t very concerned with Aaron; they knew he would pop up eventually and wolf down his sandwich. They had to enjoy these daily lunches while they could, because in another month, school would be in session and the garden would be deserted until around three o’clock every day.