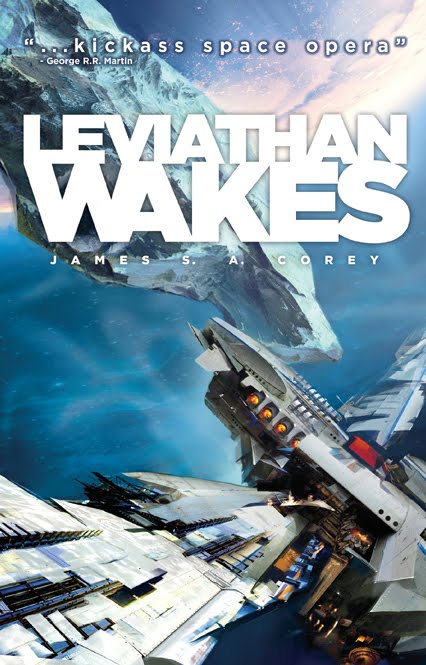 BOOK ONE OF THE EXPANSE

Orbit is an imprint of Hachette Book Group, Inc. The Orbit name and logo are trademarks of Little, Brown Book Group Limited.

A Preview of
Caliban’s War

Books by James S. A. Corey

Like most children, this book took a village. I would like to express my deep gratitude to my agents, Shawna and Danny, and to my editors DongWon and Darren. Also instrumental in the early formation of the book were Melinda, Emily, Terry, Ian, George, Steve, Walter, and Victor, of the New Mexico Critical Mass writers group, and also Carrie, who read an early draft. An additional thanks goes to Ian, who helped with some of the math, and who is responsible for none of the mistakes I made understanding it. I also owe an enormous debt to Tom, Sake Mike, Non-Sake Mike, Porter, Scott, Raja, Jeff, Mark, Dan, and Joe. Thanks, guys, for doing the beta testing. And finally, a special thanks to the
Futurama
writers and Bender Bending Rodriguez for babysitting the kid while I wrote.

For Jayne and Kat, who encourage me to daydream about spaceships

T
he
Scopuli
had been taken eight days ago, and Julie Mao was finally ready to be shot.

It had taken all eight days trapped in a storage locker for her to get to that point. For the first two she’d remained motionless, sure that the armored men who’d put her there had been serious. For the first hours, the ship she’d been taken aboard wasn’t under thrust, so she floated in the locker, using gentle touches to keep herself from bumping into the walls or the atmosphere suit she shared the space with. When the ship began to move, thrust giving her weight, she’d stood silently until her legs cramped, then sat down slowly into a fetal position. She’d peed in her jumpsuit, not caring about the warm itchy wetness, or the smell, worrying only that she might slip and fall in the wet spot it left on the floor. She couldn’t make noise. They’d shoot her.

On the third day, thirst had forced her into action. The noise of
the ship was all around her. The faint subsonic rumble of the reactor and drive. The constant hiss and thud of hydraulics and steel bolts as the pressure doors between decks opened and closed. The clump of heavy boots walking on metal decking. She waited until all the noise she could hear sounded distant, then pulled the environment suit off its hooks and onto the locker floor. Listening for any approaching sound, she slowly disassembled the suit and took out the water supply. It was old and stale; the suit obviously hadn’t been used or serviced in ages. But she hadn’t had a sip in two days, and the warm loamy water in the suit’s reservoir bag was the best thing she had ever tasted. She had to work hard not to gulp it down and make herself vomit.

When the urge to urinate returned, she pulled the catheter bag out of the suit and relieved herself into it. She sat on the floor, now cushioned by the padded suit and almost comfortable, and wondered who her captors were—Coalition Navy, pirates, something worse. Sometimes she slept.

On day four, isolation, hunger, boredom, and the diminishing number of places to store her piss finally pushed her to make contact with them. She’d heard muffled cries of pain. Somewhere nearby, her shipmates were being beaten or tortured. If she got the attention of the kidnappers, maybe they would just take her to the others. That was okay. Beatings, she could handle. It seemed like a small price to pay if it meant seeing people again.

The locker sat beside the inner airlock door. During flight, that usually wasn’t a high-traffic area, though she didn’t know anything about the layout of this particular ship. She thought about what to say, how to present herself. When she finally heard someone moving toward her, she just tried to yell that she wanted out. The dry rasp that came out of her throat surprised her. She swallowed, working her tongue to try to create some saliva, and tried again. Another faint rattle in the throat.

The Namesake by Steven Parlato
A Mate's Revenge by P. Jameson
Mammoth by John Varley
Monsieur Pamplemousse and the Militant Midwives by Michael Bond
Blind Your Ponies by Stanley Gordon West
When True Night Falls by Friedman, C.S.
Head in the Sand ... and other unpopular positions by Linda M Au
The QB: The Making of Modern Quarterbacks by Feldman, Bruce
Desire in Tartan: 2 (Highland Vampires) by Suz deMello
The Words You Should Know to Sound Smart by Bly, Bobbi