Read Life on the Level Online

Life on the Level 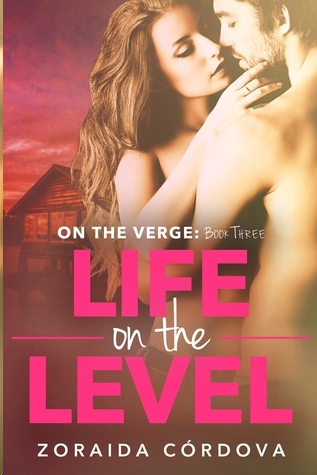 Life on the Level
On the Verge: Book Three
Zoraida Córdova
Copyright

Copyright © 2016 by Zoraida Córdova
All rights reserved, including the right to reproduce this book or portions thereof in any form whatsoever.
Cover Designed by Najla Qamber Designs

To Laura Duane, for totally getting me.

“I hope the sky’s not the only big thing in Montana,” I whisper in his ear.

His full lips smile against mine.

“You’re a handful, aren’t you?” His voice is like the whiskey, burning right through me.

I pull away from him to get a good look at his face again. The dim blue light of Grizzly Country Bar frames his sharp cheekbones and strong jawline. He has dark eyes and darker hair that coils around the tips of my fingers. I’ve finally met a guy that makes my heart skip a beat.

I’ve been in town for a little less than two days, on the road to salvation. Actually, on the road to Sun Valley, Montana. Tomorrow, my life changes forever. Tonight, I’ll allow myself one last hurrah, and his name is—well, actually, I don’t know his name. But from the moment I set foot in the bar and saw him hunched over his beer, looking like he was just as lost as I was, I knew it had to be him—and only him.

I went right up to him, grabbed his beer, and took a swig from it. It was still frothy and cold. His midnight-black eyes went wide and a little angry. Then he looked me up and down, and his eyes softened. Unlike other guys, he didn’t linger at my long, suntanned legs. He looked straight into my eyes, and I didn’t look away for a minute.

“Hey, Trouble,” he said, an irresistible grin spreading across his beautiful face.

The rest of his body is solid, and even sitting down, he looks tall. I bet he’s one of those guys who rides around on horses, rounding up cows and stuff. Men aren’t built like this in New York. Salt of the earth and all that.

He looked taken aback by the offer. Some guys don’t like aggressive girls, and even more girls don’t like aggressive girls. But what did I care? If he was into me, great. If he wasn’t, then it wasn’t meant to be. He looked a little nervous. He asked me my name, and I pretended the music was too loud. I loved watching him turn toward me. I asked if he wanted to sit in the corner booth for more privacy.

My heart skipped when he hesitated—just because a guy is smoking hot doesn’t mean he’s a manwhore. I put on my best mischievous smile, thrilled when he decided to follow.

I was surprised at how easily he talked about himself. I didn’t want to care. But I found myself smiling while he spoke. He was born and raised in Montana, and went to the U of M right here in town. He’s going to tell me what he does for a living, but the waitress comes over and drops off our next round. He wants to know too much. Asks too many questions. In turn, I’m super vague.

I’m from out east
, I say, and he guesses New York because of the way I asked for water.
I’m an only child, and an orphan
. What do you know? So is he. Then we’re kind of quiet, and I feel something tight in my heart. He smiles so easily and reaches for my hand. I tell him,
I’m just passing through. No, I don’t go to school. No, I don’t have friends in town.

He watches me like he’s trying to unravel a mystery, and I watch him because I want him to kiss me first. When he doesn’t, I kiss him. I press my lips to the corner of his mouth, and he watches me for a long while. It feels too intimate, but what do I know of intimacy? My skin flushes when he reaches for my long blonde curls. He brushes them over my shoulder. I see him trying to make up his mind. I see him convincing himself that this anonymous hookup is right.

“You look nervous.” I rest my back against the leather of our cozy little booth.

He chuckles. “I’m not used to putting on a show.”

A few locals nudge each other in the ribs. Waitresses eye us in their perfunctory ponytails and maroon tank tops two sizes too small, to get that perky and pushed up look. Or I should say, they eye me. It’s like I’ve taken something precious from them and kept it for myself.

My best friend Sky always reminds me that I don’t like to share. That goes for my fries and my men.

“Only when you’re sharking some dudes at pool?” I ask.

He cocks his head to the side and takes a sip of his beer. It’s local, and there’s a picture of a moose on it. It matches the moose head on the wall, among other mounted wild animals. This is the closest to nature I’ve been in a long time. Unless you count the squirrels that try to hijack my food in Central Park.

“I know what you’re doing,” he tells me, pulling my legs across his lap. “You’re trying to make me guess your name.”

It’s a funny thing—I don’t remember his name. I don’t know his birthday. I can’t figure out if his sign matches mine in any sort of astrological way. I don’t know where he got those cheekbones, that creamy skin, those callouses on his hands, or the scar right under his bottom lip shaped like a crescent moon. I don’t know any of these things, but I sure do love looking at him.

Sure, it’s not the first time I’ve been with a guy whose name I’m not too sure on. At least, I’m planning on being with this guy. At least, I know I want to. At least, until morning.

Think of the now. But isn’t the now what gets me into trouble in the first place?

I start to call for the waitress to get us another round, but he catches my wrist in his hand. “I think you’ve had about enough whiskey to sink a battleship.”

“No sinking,” I tell him, wrapping my arm around his neck.

Someone whistles in our direction, or maybe I just feel exposed in a way I’m not used to feeling. If I were in a bar in New York, no one would pay attention to us the way people are paying attention now. That’s the downside of strolling through a new town. Not that I intend to stay past the sentence of my self-induced exile.

“You know what I think?” I hold his chin in my hand. “I think we should take this show on the road.”

His eyes are so dark I can see myself in them. So dark, it’s like looking at the night sky. “You’re killing me.”

His lips turn in the sweetest pout. “I could be. I don’t even know your name.”

“Most guys would have told me to shut up and then packed me up in their cars.”

He frowns. I decide I don’t like it when he frowns. It makes me feel like I’ve done something wrong, and I’ve had enough of that to last me a lifetime.

“I’m not most guys, sweetheart.”

I can see the struggle in his face. His dark eyes trace my body. My neck, my face, my legs. He lingers on my legs. It might be the early end of August in Montana, but the heat clings to the mountains, and I cling to my denim shorts. His struggle is real, and I can feel it bulging against my thigh.

I bet he’s the type that thinks of himself as a stand-up guy. He probably goes to church, but in places like this that’s pretty much a given. I bet he drives a pick up truck the color of Red Delicious apples. His hands are covered in rough skin and hard callouses, and by the way his leg muscles want to rip right through his jeans, I’d say he’s either a farm hand or maybe one of those rodeo guys. But nice. He personally thinks of himself as a nice guy.

This is my last hurrah, and he is gorgeous.

“Come on, cowboy,” I say, because I’ve decided he has to be a cowboy.

The waitress throws a check on our table. I reach for my purse to pay for my drinks, my crumpled bills threatening to spill over.

“What’d you do, rob a bank?” he asks, closing my purse before I can dig through it. “Put that away.”

When he reaches for the wallet in his back pocket, it’s solidified in my mind that this guy, Mr. Montana Cowboy, is a
nice guy
.

He pays and leaves a nice tip, takes my hand, and leads me through the bar. A series of hoots and hollers follow us until we walk across the parking lot. When we get to his car I give myself ten gold stars because, lo and behold, it’s a shiny pickup truck with wheels the size of boulders. He opens the door for me and helps me climb up. He tries to ask me about myself.

I want to tell him that I don’t even know anymore, but that seems like a bit of a downer, and I want to stay up.

“I was hoping you were a rodeo star,” I tell him.

“I’ll tell you if you tell me something about yourself,” he says, parking in front of a small house. It’s weird that people out here have entire houses to themselves. Makes my little rental in the Lower East Side look like a closet. Probably because it is. “It’s only fair.”

I follow him through the entrance, kicking off my boots. Things fall on the floor when we bump into a table: mail and keys and loose change. But we don’t look down. We don’t pick anything up. We walk with our mouths pressed together. He lifts me up and carries me into a room.

Maybe there are pictures on the wall. Maybe there’s a dog running for cover. Maybe the sheets are blue.

My hands fumble with his buttons. Why would anyone wear jeans with so many buttons? That’s why God invented the zipper.

There’s the pop of his buttons snapping, the squeak of mattress springs bouncing. His torso is a thing of beauty. Every muscle ripples as he takes his shirt off over his head. He climbs on top of me. I trace my fingers down his hard abs, and I smirk a little because I was right.

The sky’s not the only big thing in Montana.

“It does little for my confidence that you’re laughing right now,” he says.

“I’m not laughing
at
you,” I say, reaching for his shaft. “Just remembering something good.”