Read Life on The Mississippi Online

Life on The Mississippi 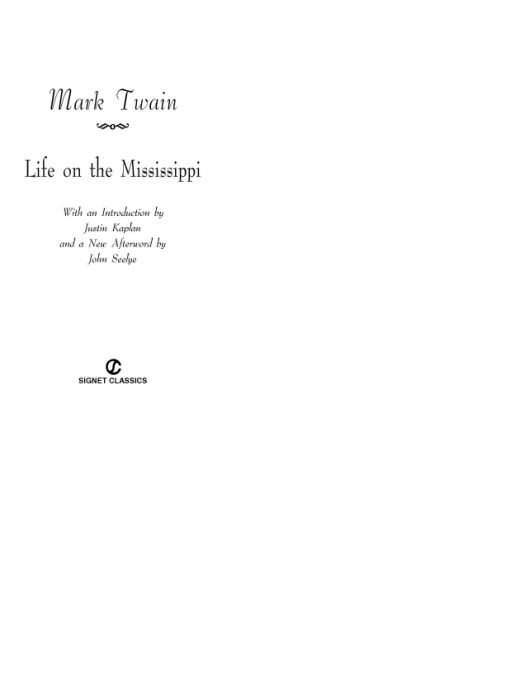 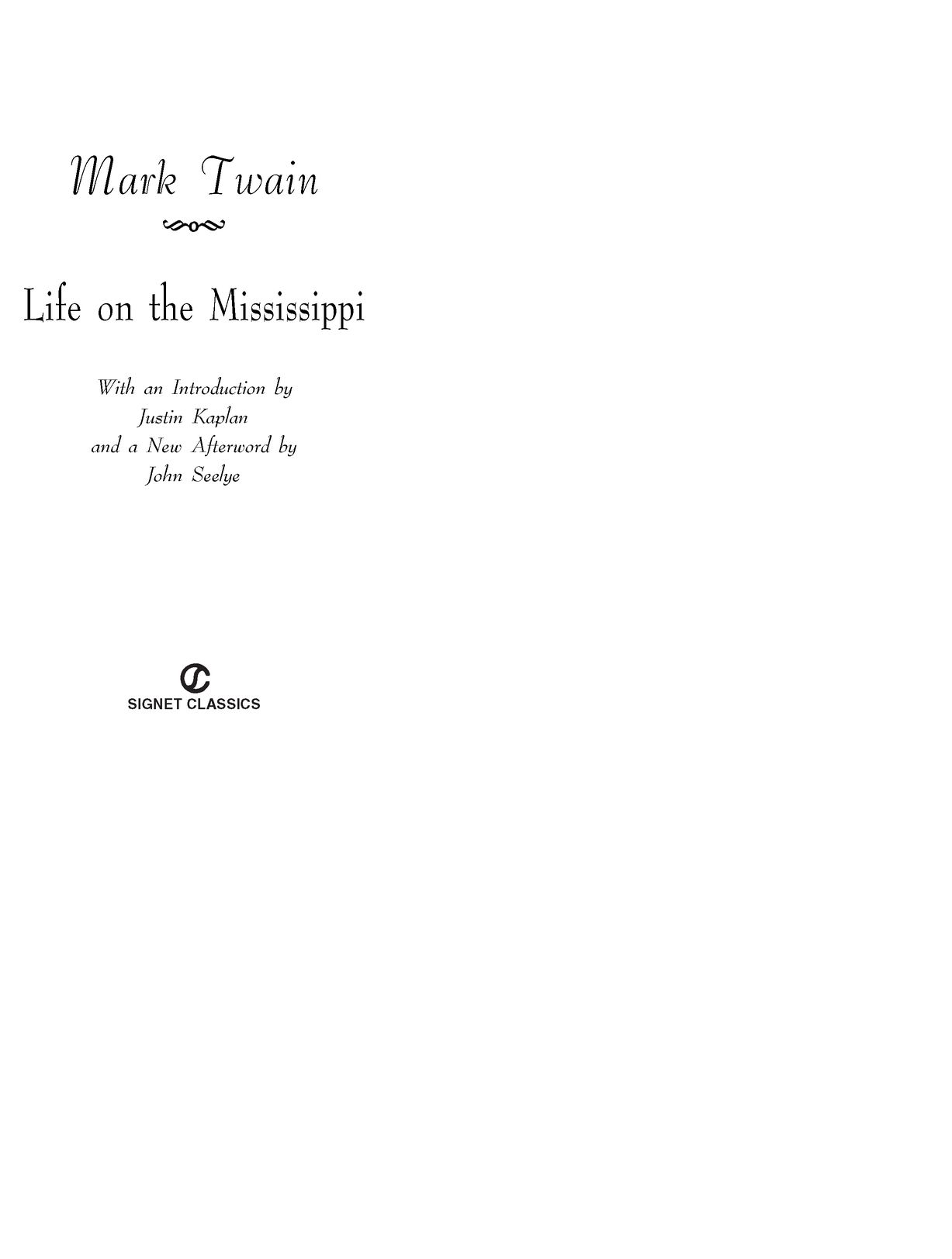 REGISTERED TRADEMARK—MARCA REGISTRADA
The scanning, uploading, and distribution of this book via the Internet or via any other means without the permission of the publisher is illegal and punishable by law. Please purchase only authorized electronic editions, and do not participate in or encourage electronic piracy of copyrighted materials. Your support of the author’s rights is appreciated.

Introduction
For four of his seventy-five years, Mark Twain (Samuel L. Clemens) worked at the wheel of a Mississippi River steamboat, first as a “cub” (or apprentice) training for his pilot’s license. He had fulfilled an early dream that never lost its hold. Boys growing up along the river had “transient ambitions of other sorts,” he recalled, to be a circus clown or a pirate, “but they were only transient. . . . The ambition to be a steamboatman always remained.” Looking back on his apprenticeship, the mature writer Mark Twain—by then famous in Europe as well as at home—still felt the joy and solitary splendor of having reached the pinnacle of his first profession. The steamboat pilot, he said, was “the only unfettered and entirely independent human being that lived in the earth.”
But such freedom and authority—by law, once at the wheel, the pilot answered to no one, not even the ship’s captain—came with a chastening responsibility: steamboating on the Mississippi was hazardous. “My nightmares to this day,” Mark Twain was to write, “take the form of running into an overshadowing bluff with a steamboat—showing that my earliest dread made the strongest impression on me.” His brother, Henry, a clerk on the
Pennsylvania,
had been among the hundred or so passengers and crew who died in June 1858 when the ship’s boilers blew up sixty miles downriver from Memphis. “My darling, my pride, my glory, my
all,
” the twenty-twoy-ear-old Sam Clemens mourned, praying to be struck dead if this would bring the boy back to life: he had arranged Henry’s job on the
Pennsylvania
and held himself responsible for the boy’s death. Gaudy, smoke-plumed floating palaces that were among the glories of nineteenth-century invention and elaboration, Mississippi steamboats could also be “black clouds” of destruction with “red-hot teeth,” as Huck Finn says: THEY devoured themselves, passengers, cargo, rafts and scows, and anything else in the way. Traveling on these boats, especially when they raced one another, could be like riding a volcano.
In April 1882, after twenty-one years’ absence from the pilothouse, Mark Twain came back to the river to gather material for
Life on the Mississippi
. “I felt a very strong desire to see the river again, and the steamboats, and such of the boys as might be left; so I resolved to go out there.” He brought with him on the westward journey from Hartford, Connecticut, his Boston publisher, James R. Osgood, for companionship; a Hartford stenographer, Roswell Phelps, for practical reasons; and supplies of tobacco and whiskey for his hourly needs. By the time of his return, most of the steamboats that had plied the Mississippi before the Civil War were gone—wrecked, burned, abandoned to rot and rust, killed off by the railroad. During Mark Twin’s lifetime (1835–1910), steamboating on the Mississippi passed into history and legend along with the overland stage, the Pony Express, and the Western frontier. He outlasted all of them to become their chronicler and living symbol.
The mighty river itself—the young Sam Clemens claimed to have known stretches of it as well as he knew the hallway of his own house in the dark—was familiar no longer. He recognized this soon after he began his trip downriver from St. Louis: the Mississippi was “as brand-new as if it had been built yesterday.” All that remained of his meticulously acquired knowledge of the river was a landsman’s skill in remembering names and addresses. He saw new islands, new landings, new towns taking the place of once-thriving settlements now landlocked. At the St. Louis levee, in his piloting days packed solid with steamboats, he found only half a dozen, their fires banked or dead. Tied up inside the wooded mouth of a tributary, the Obion River, he saw a lone steamboat. “The spyglass revealed the fact that she was named for me—or
he
was named for me, whichever you prefer.” Even this tribute to his fame did not relieve the feeling of strangeness and desolation—he saw no other steamboat that day.
Along with the departed glories of steamboating, there was a larger gamut of change that Mark Twin memorialized in
Life on the Mississippi
. The Civil War had closed the river to commercial traffic and destroyed the pilot’s occupation. To Mark Twain’s understanding, the war also destroyed something precious, redeeming, and innocent in American life. Moralist and social critic, he noted in its stead the hardness, cynicism, lust for money, and epidemic political corruption that shaped what he called the Gilded Age, “An era of incredible rottenness.”
ADS
15.4Mb size Format: txt, pdf, ePub