Read Lin Carter - The City Outside the World Online

Lin Carter - The City Outside the World 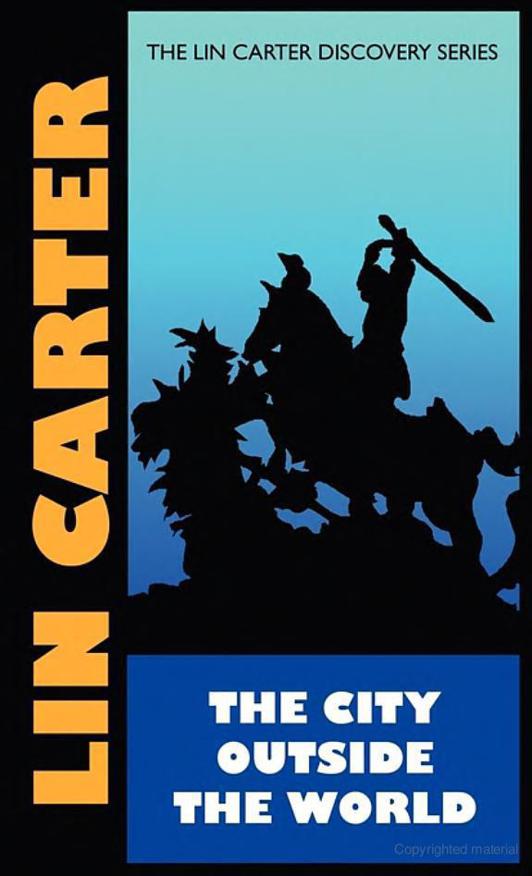 1. The Girl with the Golden Eyes 3

III. THE DOOR TO ZHIAM

IV. OUTSIDE THE WORLD

V. AN AGE THAT TIME FORGOT

1. The Girl with the Golden Eyes

They were hunting him.

You can't stay alive on Mars for very long without developing a sixth sense for such things. And Ryker had stayed alive.

It was nothing obvious or overt the hunters did which caught his attention. They were too wise in the art of manhunting to blunder or expose themselves; no, it was nothing like that.

It was a matter of many small, trifling things. The sound of a footstep in an alley he had believed empty. A shadow against the wall, gone when he glanced at it. A tingle at the back of his neck that told him unseen eyes were watching.

They had been hunting him for a long time, he knew.

Ryker growled a curse under his breath: he had been hunted before, and knew the feeling well. Not that he liked it much.

The worse thing was not that men were after him. That much he could handle, he thought, balling his heavy hands into scarred fists and hunching his broad shoulders so that the great ropes of muscles stood out on his bronzed bare forearms like cables of woven copper wire. No, being hunted did not worry him.

The thing was,
he didn't know why.

Whenever Ryker came in from the Dustlands to the city, he usually holed up in the native quarter across the

old canal. You could live cheap there, if you could stay alive, and one thing was sure: the CA cops couldn't find you, even if they tried.

Cops never go into the Old City of Yeolarn if they can help it. And when they can't help it, well, they don't live long once the narrow walls and shadowy alleyways of the ancient town have closed about them, cutting them off from the bright steel-and-plastic sprawl of the New City across the waterway.

Ryker grinned briefly, baring white teeth in a dark, scarred face. He hated the cops, hated them more than the natives did, he often thought. And that was a lot of hate.

Yeolarn is built like this: on one side of the canal the old-time astronomers back Earthside had named Hydra-otes, the New City rises, all chrome and neon and multicolored plastic. It is by way of being the capital of Mars; at least that's where the Colonial Administration has its central offices. In the New City live the men and women from Earth—bankers,clerks, accountants, civil and military personnel, doctors, nurses, bureaucrats. In neat rows of prefab, airsealed bungalows, sanitized and sterilized and pressurized, holding the thin, bitter air and the soft, cold dust of old Mars at arm's length.

On the further side of the canal, the Old City rises. It was already old when they laid the cornerstone of Babylon, old when Pharoah's engineers cleared away the sand to start building the Great Pyramid, old before the ice came down over Europe. When Yeolarn was young the British Isles were still attached to the continent, and our ancestors wore furs, wandered the world-wide forests, had yet to domesticate the dog or invent fire.

Old
—that was Yeolarn. Old beyond our thoughts or dreams. Older by a million years and more than Mohenjo-dara, Ur of the Chaldees, or Jericho. The ages had

marched over its squat, nine-sided towers and flattened domes and sleek walls of terracotta-colored native marble, smoothing the sharp edges, wearing the newness away. As house or shrine, temple or palace, slumped into decay under the slow march of the millenia, they were tamped down, and new structures were raised above their dead ruins like tombstones. Yeolarn had been built and rebuilt so many times that it was by now a trackless maze of /igzag alleys, a warren of windowless blind walls, a labyrinth in which a man could hide forever.

That was his first mistake.

So he doubled his tracks, left a few scraps of gear and clothing in the cheap dockside room he had rented, and slunk by furtive, secret ways into the Old City.

That was his second mistake.

Once he had doubled back and forth through the maze of dark, crooked alleys and put himself beyond the ability of the most sharp-nosed of cops to find, he headed across the city towards the old Bazaar of the Lions, bound for the wineshop of Kammu Jha, his favorite joy-house.

That was his third mistake, and it was very nearly fatal.

The public room of the wineshop was long and low ceilinged and roofed with slabs of stone. At one end of the hall gaped the yawning mouth of a huge fireplace, carved out of worn gray stone into the likeness of a dragon's fanged and grinning jaws. Along one wall ran benches.

Small tables stood scattered about in helter-skelter fashion. There was no bar: serving boys fetched orders of wine or ale or the Martian equivalent of brandy from kegs hung on the walls of a back room.

In the stone fireplace, coiled on the flat of the dragon's granite tongue, danced flame. Flame sprung from no ordinary fuel, for coal and wood were rare and precious beyond the dreams of avarice here on this cooling desert world. No, this flame leaped from a flat metal dish like an ewer. Therein lay pooled the ice-green fluid the Martian people call
hiyawa ziu:
"mother of fire." This strange chemical burns like thermite or phosphorus, but slowly, yielding a tremendous store of heat. The People distill it from a porous mineral called
ziuaht,
"firestone."

The room was full of men.

A score or more crouched on the long benches, or sat, hunched with tension, motionless at the tables. They were natives one and all, with the red-copper hide and oblique amber-green eyes of their kind. Under shaven brows, their faces were lean and hard and wolfish. Rings of tooled bronze or beaten copper clasped throat, wrist, biceps. Kiltlike skirts of faded leather shielded belly and thighs; some of these were worked with tartanlike patterns of cross-hatched lines which were the tribal bearings of their nations. Others, however, wore their leather plain, which denoted them as
aoudhha
: "the clanless," men without kin—outlaws, or outcasts, or both.

They paid no attention to Ryker as he came into the wineshop. That was because their attention was rivetted upon the girl who danced before them in an open space. The girl who coiled and glided like the flame that danced upon the stony dragon's tongue that was the hearth.

When Ryker saw her, his attention was seized, too.

She was naked, except for a single strap of gilded

leather that hung down before her loins. Her body was slim and lean and tawny, sinuous as a panther's, and as golden. That rare, pale gold that denotes on Mars the pure breeding of the princely houses of the High Clans.

Her hair was a banner of black silk, floating on the spicy, hot breath of the fire. Her breasts were shallow, rounded, firm, like lustrous, pale fruit. As she danced, moving her loins and torso alone, her feet all but motionless on the pave, her arms were thrust skyward and slightly back, curved at the wrists, held moveless.

She danced—if the writhing undulation could be named with so mundane a verb—with her belly and her breasts and her buttocks.

Ryker sucked in one long breath, and held it until the blood drummed in his temples. His pale and colorless eyes burned coldly from the dark leathern mask of his face. Never had he seen or imagined a dance so rawly savage, yet so exquisitely sensual.

She danced like ripples of moonfire riding the black waters of the old canals; like pattering leaves driven by a moaning and restless wind aprowl through an abandoned courtyard. Her flesh—
crawled.
Her bare breasts panted. Her belly and loins swung in a slow, undulating spiral that was naked invitation.

Her tawny limbs had been rubbed with scented oil until they glowed like amber silks. Then a sparkling dust, like that of crushed mirrors, had been sprinkled across her body. Firelight glittered like powdered gems from every sinuous twist and undulation.

Reluctantly lifting his eyes from the allure of her breasts, Ryker saw that her face was catlike, wide cheeked, elfin, with a small chin and a full-lipped mouth. Her nose was pert, a mere nubbin. Her eyes-

He frowned, then. For she went masked and he could

not see her eyes. The visor was of black satin, molded to fit the contours of her face, and it had no eyeholes. Which was strange, he thought, but not very important. With all that sleek, glowing flesh to drink in, he did not have to see her eyes.

And that was his last mistake.

She danced to the pittering of drums and the wail of a small pipe. An old, bony man clenched the drums between gaunt knees, where he squatted to one side of the drag-on's-mouth fireplace. His gnarled, knobbed hands made dry, erratic music.

The pipe was held by a naked boy of perhaps twelve, who leaned with gamine grace against a pillar. The thin, wailing cry of his pipe was like a lost soul in torment, sobbing from the throat of hell. The shrill, raw pain of the sound, and the sadness in it, raised the nape hairs on Ryker's neck and made the skin on his bare arms creep.

The girl froze in her last position, then turned and glided away, shrugging through bead curtains that tinkled across a narrow stone doorway. The old man ceased his pattering and climbed stiffly to his feet and hobbled out after the girl. The naked boy took the pipe away from his mouth, grinned impishly, and picked up a copper bowl from a low table and went around the room from man to man.

The men stood or sat, breathing heavily, still staring with hot eyes at the empty space where the girl had writhed. They barely noticed the boy, merely plucking a coin from their belt pouch as he paused in front of each, clinking his bowl remindingly.

When the boy stopped in front of Ryker, the Earthman looked him over slowly, with bemused eyes, coming out

of his trance painfully. As he dropped a coin in the bowl his eyes caught sight of something on the boy's naked chest. Just above the heart and just below the nipple an emblem had once been tattooed. Efforts had been made to erase that which had been needled there, but the smooth, sleek flesh caught the gleam of the firelight in such a way that Ryker could see marks of the needles, even though the pigment had been erased.

It was an odd sign, vaguely familiar: a crouching, many-legged creature, vaguely like an insect. And winged, the many wings folded against its slope of thorax and pod. Weird and strange, and curious.

Mischief gleamed in the boy's eyes, and a trace of contempt, as he looked at the Earthman and knew him for what he was, a hated
F'yagha,
an Outworlder. But he did not reject the coin. Turning on his heels, his round little bottom cocked impudently, he swaggered from the room. Shouldering through the tinkling bead curtains, he vanished after the old man and the naked dancer, and was gone.