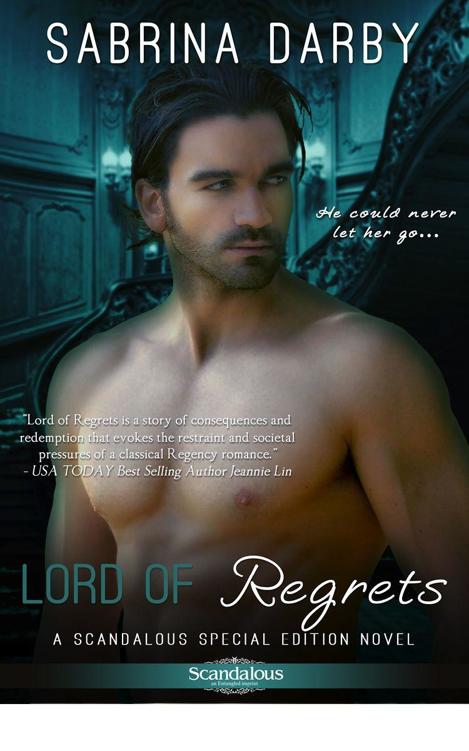 He could never let her go...

Despite the love and sensuous addiction they shared, Lord Marcus Templeton could never marry Natasha Polinoff. Not while he remained under his grandfather’s vise-like control. But when Natasha announces her out-of-wedlock pregnancy—which would destroy his inheritance—Templeton explodes into a rage. One that sends Natasha running into the unforgiving night, never to return...

Now five years have passed, and Lord Templeton has finally found his beloved. And this time, the viscount will have her.

However, Natasha has finally settled into a new life with her young daughter. Lord Templeton’s arrival fills her with terrible fear... and undeniable longing. He has come to claim her. Yet even as her body still longs for his touch, her anger still burns. She is no mere possession. But Lord Templeton will do whatever it takes to bring her back into his arms and back into his bed. Even if it means resorting to blackmail to make Natasha his wife...

Copyright © 2014 by Sabrina Darby. All rights reserved, including the right to reproduce, distribute, or transmit in any form or by any means. For information regarding subsidiary rights, please contact the Publisher.

Scandalous is an imprint of Entangled Publishing, LLC.

With his eyebrows slanted down, his jaw clenched in anger, it should have been impossible for the expression in his eyes to be as immovable as it was. How could a man be so hot and so cold all at once?

Natasha flinched, her shoulders hunching, her midsection hollowing out, as if he might have pulled the living thing from her body with just those words.

“I assure you, it is a far more inconvenient development for me than for you,” she said, wishing her voice didn’t shake, wishing she could straighten her back, that her bare shoulders didn’t feel so weak. Of all the responses she had imagined, she had not imagined this.

“Then we are in agreement.” Marcus’s expression eased; the heightened color in his cheeks faded. For a moment, he looked more himself, more reasonable, more the dashing, charming young nobleman she loved.

“You cannot simply wish away a child,” she said with more calm. He loved her. He would love this child, too. “We were careless. We left this in God’s hands.”

“God,” Marcus scoffed, turning away from her. Her gaze settled on the place where the dark waves of his hair curled over the edge of his coat collar. She longed to touch him there, to lift the hair and feel his warm neck under her fingers, to do away with this horrible conversation and return to the language they knew best. “You’re a whore. I thought you women knew how to take care of these matters.”

Her shoulders bent forward even more for the briefest moment, as if they wished to meet, to close her off from the verbal assault. Then she pulled herself up. Whore. The word was vulgar, unwanted, the same one her parents had pelted her with the night they had thrown her out of the house. In love with Marcus, she had hidden from the truth, lived only in the present, but she was, she supposed, a whore now, even if it was he who had made her one.

And now he was asking her to do the unimaginable.

The inky-black haze of his body rushed toward her. His hands caught her arms. The heat of his fingers seared her bare skin. His face––dear Lord, that was not the man she had held in her bed, had urged inside her. This was some other Marcus, some demon-driven, heartless man. This man might kill her. In his need to destroy the life inside her, he might destroy her altogether.

“You will. I’ll see to it. You won’t ruin what I’ve spent so long building.” She heard his voice, but his face was so close to hers that she blinked, struggling for perspective––struggling to clear her mind and focus.

Building
. He referred to the painstaking attempt to clear his family of his father’s debts and sullied reputation, to gain his grandfather’s approval. But she realized now that she knew so little of him, and his words felt sinister rather than honorable and ambitious.

She was dizzy and melting under the heat of his anger. His eyes, the brown of which she had always found warm and comforting, now made him seem impenetrable and untouchable. All that held her up was the steel of his palms. It was not so different than giving in to the heat of his desire, only now…

“Many men have bastards,” she whispered. “What’s one more?”

Her eyes caught his, found them amid the dizzy wash of turbulent emotions. And there, in his gaze, something flickered. Regret? She struggled to understand, to hope—

Or perhaps he simply let go, but she fell, her hands grasping for him. Then the bed pillowed beneath her, soft and surprising, and there was nothing of him to see. Nothing to see at all but the pink, silk-covered walls and the heavy mauve brocade of the bed’s canopy.

The scrape of metal against wood played out a sharp tune above the rhythmic
thud
of his booted steps. The doorknob turned.

She struggled, pushing herself up to rest on her palms just as the door slammed shut.

When she heard the unmistakable sound of a key turning in the lock, Natasha’s confusion ebbed. He had locked her in—locked her into her own bedroom. When she heard his muted shouts for his man, she knew she would be forced.

She couldn’t stay there, couldn’t let him do this. She might have given him her body, her virtue, her reputation, and even her love, but this—this was unconscionable. Natasha stood, scanning the room. Fear clarified her mind.

Her jewelry box––it overflowed with tokens of his generosity. Her wardrobe––she could never carry so much. The window––she stumbled to it––overlooked the garden, and there was a slight ledge. She could––

She could kill herself and the child was what she could do with such a scheme.

She’d think about that later. The valises and trunks were stored in another room, and her maid had fled at the first sign of unrest, so Natasha put her jewelry into a hatbox and tossed in the few personal effects she did not wish to leave behind. She tucked inside, as well, the letter from Marcus she had once considered a love letter, a mark of his devotion––the letter that had encouraged her to part her legs and bear the stinging pain of a man’s first entry.

She stumbled, catching her reflection in the vanity, and for a moment stood, caught by the image of herself, of her eyes, wide and scared—tear-darkened lashes rimmed green circles in a pale face framed so fashionably with honey-shaded ringlets. Who had she become? A muted shout from downstairs jolted her back to practical matters.

But she was wearing an impractical dress, the silk thin and the bodice low, and there was no time to change. The physician or the back-alley butcher would be there any moment. She pulled a warm cloak over her shoulder, took the hatbox in her arms, and went back to the window.

The ledge was narrow and, with the box, she would never be able to maintain her balance. She laid the box on a chair and threw the lid aside. Diamonds and sapphires, rubies and opals, she stuffed into her pockets and down into the hollowed space of her stays. Her fingers glittered with jeweled rings, unsafe to wear at any time in London’s streets. Her loosest gloves, pulled on quickly, clung to the stones like leather mountains. She left the other trinkets and baubles, but the letter she kept.

She was weighted down by the jewelry, by its heaviness and by the heaviness its import left in her heart. She wore her most costly earrings—a whore’s earnings. And her child’s safety.

She pushed the window open. The October wind stung her cheeks and made the draperies balloon with air before they settled back. Natasha took a deep breath, whispered a prayer to the god of whom she so rarely thought, and then crawled out onto the ledge.

Marcus braced himself for her anger. He deserved it, he knew. He had been a complete ass, scared out of his mind with the thought of losing everything––his inheritance, his position. Natasha knew nothing of any of that and he had terrified her, treated her abominably. He’d called her a whore.

What sort of man did that to the woman he loved?

A scared, cowardly man, a characterization to which Marcus had never aspired. In the stretches of his mind, flickers of understanding teased him—his words, his threatened actions against…

Twenty minutes spent pacing in the vestibule of her apartment, the apartment he paid for, lived in more than his own bachelor rooms across town, cooled his temper and cleared his mind.

When the surgeon stood before him, his black bag of instruments starkly dangerous in his grip, Marcus understood that there were other solutions. Solutions equally drastic but less appalling. At least, less appalling to him, and there were no codicils in his grandfather’s will against
that
option.

Natasha might be his mistress, but a man could marry a mistress. Then his child would be legitimate. If Marcus’s child were legitimate, he would be fulfilling all his obligations at once, never mind that Natasha would hardly be his family’s first choice for his wife.

So simple, so clear, and so much more the natural resolution to their dilemma. To his dilemma.

Marcus sent the surgeon away with a coin for the man’s time. Fear had retreated and in its wake was a nascent excitement. He had to face Natasha, face her well-justified wrath, but she’d forgive him, surely she would. She’d understand once he explained. She knew he loved her, and she’d whispered the words in return countless times. He clung to the sound of her voice in his mind. Love would help; she’d understand how money warped a man’s mind. And she’d want to be a viscountess, a countess when his grandfather died. What woman wouldn’t? But would that be enough?

He unlocked the door and pushed it in cautiously, half expecting a chair or a comb or any other object to come hurtling at his head. Not that she’d ever behaved so intemperately before, but these were extenuating circumstances, and he wouldn’t blame her well-deserved fury.

There was no attack, no sound other than the sweet breath of wind whipping at the curtains and bed hangings. He entered the room, searching, seeking.

Empty
. The room was empty.

Then he noticed chill air and the window, open, and the hatbox, dripping with baubles.
No.

He ran to the casement, fear hollowing out his chest. The bedroom was three stories up. There was no balcony; there was no way down.

The wood was rough and cold beneath his fingers. The garden below, blindingly bright in the crisp light of day, was empty. Marcus collapsed back against the wall in relief, his sight momentarily black from the contrast.

Relief transformed to purpose. He pushed himself up and raced downstairs to the street. In twenty minutes, how far could she have gone?