Lord of the Silent Kingdom 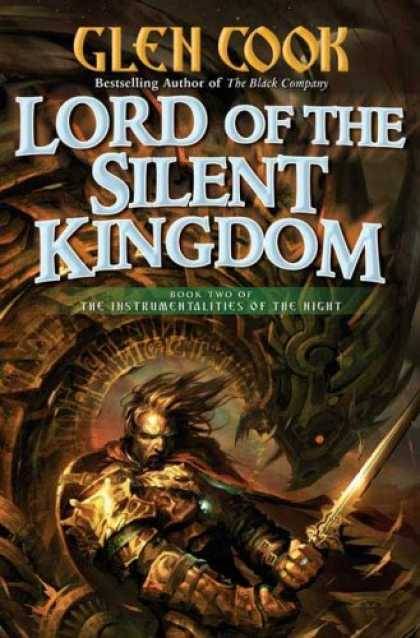 LORD of the SILENT KINGDOM

Book Two of the Instrumentalities of the Night

It's cold. The wells of power are weakening and the forces of Night grow strong. The gods are real, and still have some power, mostly to do harm. The Instrumentalities of the Night are the worst of these.

Piper Hecht, born Else Tage, survived a battle with the Instrumentalities. Now he's Captain-General of the armies fighting a crusade for Patriarch Sublime V. Intrigues swirl around the throne of the Grail Empire, as the imperial family's enemy Anne of Menand raises money to help the perpetually indebted Patriarch finance his crusades. To reduce his own vulnerability, sickly young Emperor Lothar assigns his two half-sisters—his immediate heirs—to their own realms.

Now Piper Hecht learns that the legendary sorcerer Cloven Februaren, referred to as the Ninth Unknown, is still alive, more than 100 years old, and on Piper's side. As the dynastic politics of the Empire become even more convoluted, it's clear that while the old gods may be fading, they're determined to do everything they can to bend the doings of men to their own advantage.

Sieges, explosions, betrayals, Anti-Patriarchs, and suspicious deaths will ensue as the great chess game plays itself out, with Piper Hecht at the center of it all…

LORD OF THE SILENT KINGDOM

Tor ® is a registered trademark of Tom Doherty Associates, LLC.

NOTE: If you purchased this book without a cover, you should be aware that this book is stolen property. It was reported as “unsold and destroyed” to the publisher, and neither the author nor the publisher has received any payment for this “stripped book.”

In memory of my father,

who lived a life stranger

In memory of my good friend

Richard Cole, who snuck out the back

way early, before the

adventures could all be

The ice advances every winter. The world grows colder. The seas grow shallower. In northernmost Andoray the reindeer herds and mystic Seatts have disappeared. The farms and pastures, hills and fjords that supported the warlike Andorayans, two centuries gone, are entombed under ice so thick the wild, tall mountains are lost. Across the world

—
though less so amongst the Wells of Ihrian

—
the wells of power are weakening.

Till recently dramatic change has been confined to the far rims of civilization. Lately, though, they have begun to have a real impact round the Mother Sea. A flood of refugees has made it possible to raise armies at bargain prices. Just when the Episcopal Church is ruled by an obsessed Patriarch confident that he is
the
divine instrument meant to expunge heresy and crush unbelievers so all mankind can enjoy God’s grace and salvation. As others have done, overlooking the fact that an omnipotent God can handle those sorts without mortal assistance.

The influx of the displaced causes instability everywhere. No one is concerned about the problem. No one
sees
the problem — except at the local level, where folks grumble about the increase in crime and violence, compared to the good old days. Their response to theft or violence is often ferociously violent itself.

Wars are being fought every day, even where armies are not on the march. And wars within wars. And wars behind wars.

There is the endless struggle on behalf of God, the war for heaven fought on earth. It is the war that never ends because the divine touches no two minds the same and few men credit any revelation but their own.

There is the war for daily survival in a world with neither the means nor any philosophical inclination to make abundant resources commonly available.

And there is the incessant, silent war against the Tyranny of the Night. This most deadly and most vile of wars is the struggle least well known. Not one man in five hundred becomes aware of the conflict, yet to be born is to become a conscript in the struggle with the Instrumentalities of the Night. On one side or the other.

1. Caron ande Lette, in the End of Connec

The enemy came out of the forest on the Ellow Hills, sudden as a spring squall. There had been no rumor of their coming. Brock Rault, the Seuir ande Lette, thought they were bandits when the first handful appeared. Then his conscience threw up the fear that they might represent Tormond of Khaurene. The Duke of the End of Connec had forbidden the construction of new fortifications except under ducal charter. Unfinished, Lette was just the sort of fastness that Tormond had proscribed.

Fortifications were appearing throughout the End of Connec. And caused more despair than comfort.

The universal inclination seemed to be, once a man was confident of his own defenses, to hire mercenaries and become a plague upon his neighbors.

The Seuir ande Lette was an exception. Barely twenty-one, nevertheless, he had been with Count Raymone Garete at the Black Mountain Massacre and was a veteran of the Calziran Crusade. He had smelled the cruel beast War’s foul breath. He had tasted blood. He loathed his family’s enemies but never so much that he felt compelled to gift them with terror, death, or pain.

Peace was the root of his faith, though he was a warrior born and consecrated.

Brock Rault was Maysalean, a Seeker After Light. Peaceable by belief and a heretic by declaration of the Brothen Episcopal Church. He did not hide his beliefs.

The enemy drew closer, too quickly for some peasants to get safely inside Caron ande Lette. The Seuir realized that the invaders were no brigands. But neither were they much more, except in numbers. A banner identified them as followers of the Grolsacher mercenary captain, Haiden Backe. Backe operated under letters of marque from Patriarch Sublime V. He roamed the northeastern marches of the Connec, supposedly punishing heretics. In actuality, he plundered anyone who would not buy an exemption.

For his troubles, Haiden Backe received a third of the plunder, which he had to share with his troops.

The rest went to the Church.

The Church was desperate for funds. Sublime had to repay loans taken during the Calziran Crusade. Any default meant there would be no loans in the future. Nor had he yet finished paying for votes he had bought during the Patriarchal election.
And
he wanted to raise new armies to launch another crusade against the Pramans occupying much of the Holy Lands.

Past crusades had established Brothen Episcopal footholds amongst the Wells of Ihrian, as Crusader principalities and kingdoms. During the last decade, though, those states had been under severe pressure from the Kaifate of Qasr al-Zed and its great champion, Indala al-Sul Halaladin. Sublime desperately wanted history to acclaim him the Patriarch who wrested the Holy Lands from the Unbeliever forever.

His extermination of heresy at home would finance the glorious mission overseas.

Honario Benedocto, who had schemed and bribed his way into the Patriarchy, was loathed with enthusiasm by millions.

The Seuir ande Lette turned to his nearest companion, a gray man in his early sixties. “What say you, Perfect Master? It seems the hour of despair has arrived sooner than you forethought.”

The Perfect Master of the Path, Brother Candle from Khaurene, bowed his head. “I’m tempted to declare my shame. As though my coming conjured this pestilence. As to advice, I can only repeat the admonition of the Synod of St. Jeules. Let no Seeker After Light be first to raise his hand against another man. But let no Seeker strengthen evil through any failure to resist it.”

Brother Candle had argued against that stance. He was a pacifist at heart. But once the synod reached its decision he set out to prepare his Seeker brethren to defend themselves. Some would destroy them rather than recognize their special relationship with the Divine.

Get away from Lette while you can.”

Brother Candle stared out at the raiders. Few of them were driven by their devotion to the Episcopal faith. They were mercenaries because they could do nothing else. Without this marginally religious pretense they would be simple brigands.

More than one darkness stalks the earth.

“No stain of cowardice would attach to you, Master,” Brock Rault promised. “We’d all rather that one so rare as you be removed from harm’s way. Haiden Backe will offer you no respect.” Rault’s brothers and cousins nodded as they prepared to fight. “And you can carry our plea for help to Count Raymone.”

Brother Candle went to stand alone, to meditate. To seek the best path. To discover how he could best serve. To let the Light move him.

The flesh was loath to go. The flesh dreaded what secret thoughts others might entertain if he chose flight.

Yet he would do no one any good, ever, if he let himself be butchered at Caron ande Lette. The Church would crow because one of the Adversary’s most favored had fallen — while insisting that it had nothing to do with Haiden Backe’s campaign. Slipping the Grolsacher a bonus for having disposed of one of those pesky Maysalean Perfects.

Rault said, “I’ll have a fast horse brought to the water postern.”

“I arrived on foot,” the holy man replied. “So shall I depart.”

No one argued. A man afoot, in tattered clothing, would be ignored. The outlanders did not understand Maysalean vows of poverty.

Brock Rault engaged the Grolsacher warlord in pointless discourse. He hinted that, offered the right terms, Caron ande Lette might yield without an exchange of blows. Haiden Backe would not find negotiations unusual. Connectens seldom chose to fight in the face of superior numbers. Then Brock’s youngest brother, Thurm, reported, “The Perfect Master is out of sight.”