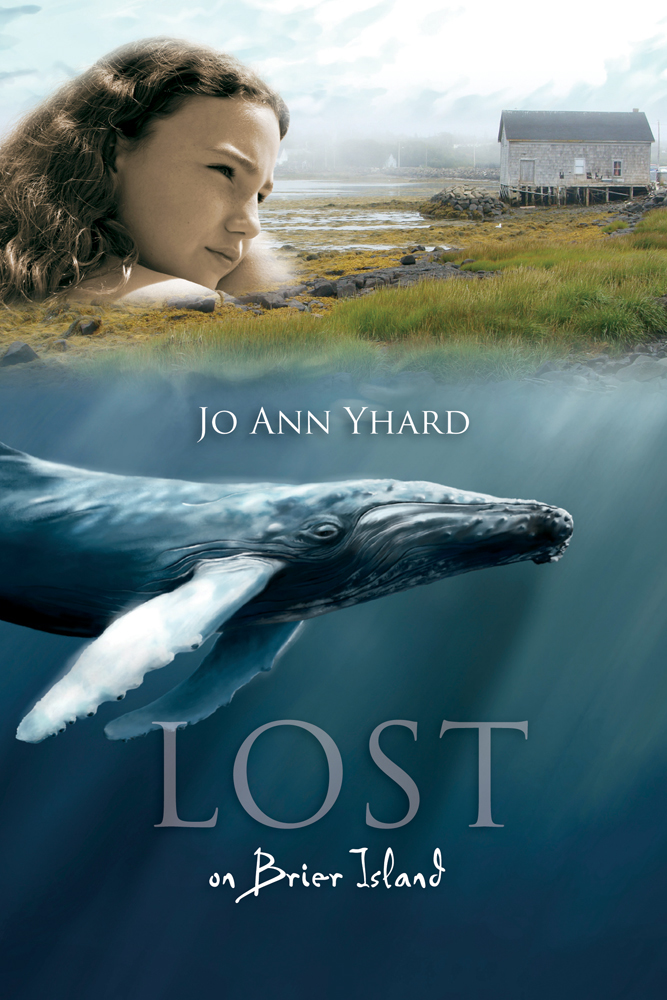 All rights reserved. No part of this book may be reproduced, stored in a retrieval system or transmitted in any form or by any means without the prior written permission from the publisher, or, in the case of photocopying or other reprographic copying, permission from Access Copyright, 1 Yonge Street, Suite 1900, Toronto, Ontario M5E 1E5.

Nimbus Publishing acknowledges the financial support for its publishing activities from the Government of Canada through the Canada Book Fund (CBF) and the Canada Council for the Arts, and from the Province of Nova Scotia through the Department of Communities, Culture and Heritage.

I am grateful for your continued support and inspiration, especially to our next generationâMary, Matthew, and Ella.

You keep us all young at heart.

Alex sat in the kitchen with her arms crossed and stared at the red and white checked pattern on the tablecloth. Her stomach growled. Out of the corner of her eye, she could see Aunt Sophie approaching in her paint-splattered jeans.

“C'mon, kiddo, eat up.” Aunt Sophie placed a plate of scrambled eggs in front of her. “These are eggs like you never tastedâfrom my own chickens.”

Her aunt sighed and sat down.

Alex turned away and looked out the window at the ocean off in the distance.

“Alexandra,” Aunt Sophie said, “I can live with the grumpy face, but you have to eat.” She pushed the plate closer and plunked a glass of apple juice down beside it.

“Don't want it.” Alex nudged her chair away from the table. “And my name is Alex.”

“Alex, then. You've been here for two days already. You can't keep sneaking the cookies and pop I bought as a treat for you and not eat regular meals.”

Alex's head snapped up in surprise.

“Hey, I can see when a cookie box is empty as well as anyone.” Aunt Sophie smiled. “Sorry, kiddo, I've got to pull out the responsible adult act here. You'll just have to sit there until you finish it.”

“Fine!” Alex scowled and stabbed her fork at the yellow mound, stuffing in a mouthful. The eggs were soft and creamy. Her stomach growled even louder.

“See, it's not so bad.” Aunt Sophie patted her shoulder and got up from the table. “Besides, you need your strength. It's a sunny day, finally. We're going out.”

Alex gulped down the cold juice. Out? She couldn't think where they would go. Brier Island had no mall, no movie theatre, and no arcade. There was nothing at all to do.

They strolled down the dirt road. Aunt Sophie didn't drive unless she had to. Alex could see a sketch pad peeking out from her aunt's bag.
Hmmm, she's probably going to try to get me drawing again
, Alex thought. Her aunt was wasting her time.

“Oh, look.” Aunt Sophie stopped suddenly and pointed to a cluster of yellow flowers by the side of the road. “These are endangered.”

Endangered flowers? That was silly. They looked like plain old buttercupsânothing special about that. A fat bumblebee droned past her and landed on one of the yellow petals.

“What a great shot,” Aunt Sophie said. She pulled her camera from her bag and started snapping away. “So unusual, tooâI've only seen Eastern Mountain Avens in Big Meadow in the nature preserve.”

Alex glanced across the field at the water. She could hear waves crashing against the shore. The sun was warm. She tilted her head back and closed her eyes. The rays felt good on her face.

After a few minutes, Alex noticed the camera had stopped whirring and clicking. She opened her eyes to see what her aunt was doing.

Aunt Sophie was staring at her with a weird expression on her face. Was she going to cry?

“What's wrong?” Alex glanced back over her shoulder. There was nothing but the flowers, the cliff, and the ocean.

“What?” Aunt Sophie seemed to snap out of a trance. “Oh, it's nothing. I thoughtâ¦it looked like you were almost smiling there for a minute. It caught me by surprise.”

Alex didn't say anything and resumed walking. Her aunt kept pace beside her. They travelled in silence for a while. Butterflies and bees continued to cross their path.

“You know, if you want to talkâ”

“I don't,” Alex said. She clenched her hands and started walking faster, almost tripping in her sneakers. They were dark blue and a size too big. Dust from the road billowed around her.

“Okay, slow down! Forget I said anything.”

“Please stop, Alex.” Her aunt jogged beside her. “I promise I won't mention it again.” She touched Alex's arm. “I promise.”

Alex slowed down and let out a deep breath. An old man riding a bicycle smiled and waved at them as he passed by. The bicycle was rusty with huge tires. It looked like it was from a museum. So did the man. With his frail hands and wispy white hair, he looked like he was made of parchment paper.

The tide was out. Mustard-coloured seaweed covered the rocky shore like a blanket. A bright white and black seagull sat amongst the thick strands, its beak clamped around a purple mussel.

Not that long ago, Alex would have been reaching for the coloured pencils and sketch pad that she always used to keep with her.

Instead, her gaze was drawn to the ferry as it sped away from the dock towards Long Island. Only one thought was in her head.

How could she sneak on board and escape from this island prison?

“Hi, Eva. What flavour coffee have you got on today?” Aunt Sophie asked as they entered the cafÃ©. She tossed her bag onto the counter and made a beeline for the coffee perk.

“Bavarian cinnamon. I thought it would go great with my gooseberry scones, fresh out of the oven.”

“Mmmm. Butter one up for me, would you?” Aunt Sophie grabbed a chipped green mug from the tray by the coffee and poured a steaming cup. The smell of cinnamon filled the room.

As Eva and her aunt chatted, Alex turned away to roam through the aisles of the general store section of the cafÃ©. It was strange coming from Halifax, a city, where there were separate stores for clothes, food, and pharmacy stuff. Everything here was jammed together on neatly stacked shelves. Tomato soup sat next to rubber boots, diapers, and playing cards.

“Has Gus been in?” Sophie asked.

“Not yet,” Eva said. “But I expect him any time. Thinking of going out today?”

“If he's not booked up with paying customers,” Sophie said. “The fog and rain have cleared off, so it's a good chance to get some photographs of the humpbacks in the bay. I hear there have been some new arrivals.”

“Hi there, dear. Would you like a scone too?”

Alex was examining a tiny sewing kit, filled with mini spools of all different colours of threads.

“Alex?” Aunt Sophie said. “Eva is talking to you.”

Reluctantly, Alex put the kit back on the shelf and walked over to the counter. “Sorry,” she mumbled. She stared at the scones. Steam was still rising from the fluffy biscuits filled with bright berries.

“Try one,” Eva said. “You'll think you died and went to heaven.”

Alex gasped and backed away from the counter. She whirled around to flee and smacked into the movie rental rack.
DVD
and
VHS
cases tumbled to the floor as she tripped, falling to her knees.

“It's okay, Eva.” Aunt Sophie knelt down beside Alex and grabbed her arms. “Are you all right?”

Alex shook her head and pushed her aunt's hands away. Tears blurred her vision.

The jingle of the hummingbird wind chimes over the screen door made her jump. Huge scuffed work boots stopped in front of her. Alex blinked and looked up. Golden hazel eyes stared back at her, surrounded by a mane of bushy brown hair speckled with grey.

“Morning, Sophie. I take it this is your summer visitor?” The man's voice was deep and gravelly, like the low growl of a lion.

“Hi, Gus.” Aunt Sophie stood up, tugging Alex with her. “This is Alex. Alex, this is Gus.”

“Pleased to meetcha.” A hand the size of a plate stretched out towards her.

Alex was mesmerized by the thick digits and unexpected perfectly trimmed, white fingernails. Lions had claws, didn't they? She didn't move.

“Bogs!” Gus grabbed her hand and pumped it up and down.

“Whales?” Alex turned to her aunt. “What's he talking about?”

“Yup, only two booked in 'cause of the weather latelyâplenty of space.” He turned away and plunked a large travel mug on the counter. “Eva, fill 'er up with some tea, would ya? Normal leaded tea, now. None of that herb crap.” He bent down over the scones and sniffed. “And toss a couple of these biscuits in too.”

“Crap indeed!” Eva muttered as she went about getting Gus's order packed up.

Alex trudged along behind Gus and Aunt Sophie as the three of them crossed the road and walked the short distance to the dock. She carried a paper bag filled with scones that Eva had insisted she take. “You'll get hungry out there,” she had said.

They passed fishing huts that extended out over the shoreline. The tiny buildings looked like old wooden garages on stilts, towering above the rocks. Their criss-crossed support beams were covered almost entirely with seaweed and barnacles. Alex was shocked. The tide didn't go that high, did it?

She trod carefully on the wharf where Gus's boat was moored. The wooden planks were uneven and many didn't seem to be nailed down. She almost fell twice when her loose sneakers caught on a beam that popped up when she stepped on it.

Her heart beat faster and her footsteps slowed as she approached the boat, bobbing on the water. It was shiny and looked new. An older couple was standing there waiting. Alex's attention was drawn back to the boat. She had never been on one that small before. The ferry had been bad enough, and it was much bigger.

Her brother Adam's teasing voice echoed in her head.
Hey, wuss, you don't swim so great, remember? Don't fall in!

She stumbled on the first step and froze, staring down at the dark water as it lapped between the vessel and the dock. Her breath caught in her throat.

It seemed like a big gap to herâtoo big.