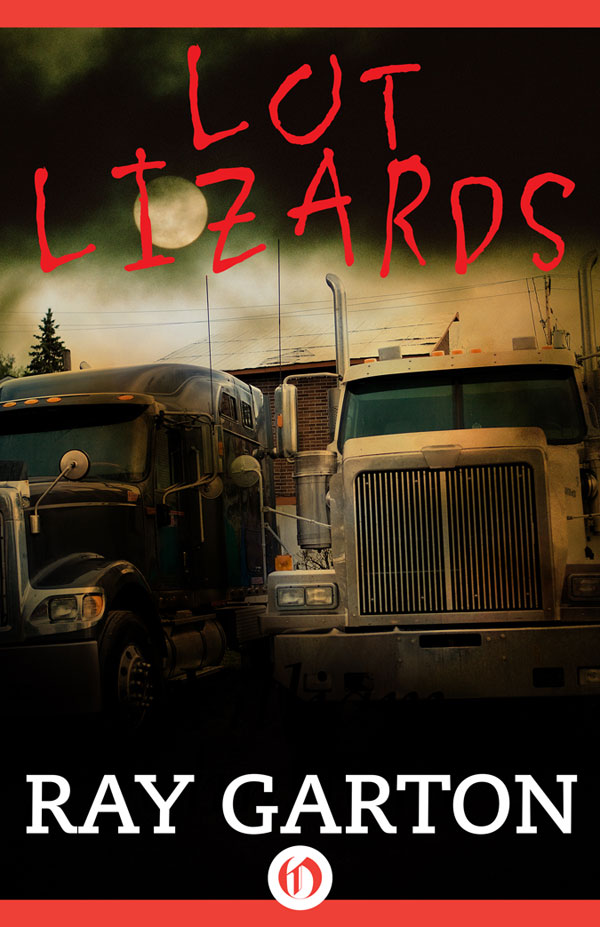 When Bill Ketter walked out of the restaurant at the Petromo Truck Stop in Springfield, Missouri, after a meal of chicken fried steak, mashed potatoes and gravy, corn on the cob and a slice of lemon meringue, he was just tired enough for his limp to show as he crossed the back lot to his truck. His left leg was an eighth of an inch shorter than his right; he was usually able to hide it with a swagger, but when he got tired, the limp was noticeable. He hitched himself up into the cab of his eighteen wheeler and pulled the door shut behind him, ready to settle down for a few hours of much needed sleep when he heard the knock. Actually, he'd been hoping for it.

It had been a long trip from California to Illinois, and now he was on his way back with a load of furniture. But other than to make his delivery, Bill could think of no good reason to return. His wife, A.J., had left him six months earlier, taking their two children with her. He'd spent a few months waiting for her to come back like she always had before; she'd left him three times in the past, always for the same reason: she could no longer live with a man who made his living spending nearly all of his time on the road delivering everything from produce to kitchen appliances and almost none of his time with his wife and children. But she'd always come back in two or three weeks, maybe a couple months.

Earlier that evening, when he'd pulled into the truck stop, that knock—or one like it—had been on his mind. He'd decided he needed something to take his mind of f A.J., and a lot lizard— one of the young women who roamed the back lots of truck stops, making a few bucks by going from truck to truck and knocking on the doors until they found a driver who was feeling lonely—would be just the ticket. He felt a sharp pang of guilt for considering it because it felt like adultery, infidelity...
cheating
. But it was pretty obvious that A.J. wasn't coming back this time and Bill felt like a walking sore, an open wound; he needed a salve.

"Yeah?" he called, kneeling on the sleeper bed, untucked shirt half unbuttoned.

"Just a minute," he said, crawling over the bed and between the seats, into the cab, checking his back pocket for his wallet. He opened the driver's side door, looked down at the girl bathed in the sickly yellow glow of the lot's mercury lamps and breathed, "Jeez, honey..."

The girl stared up at him with wide, dry looking eyes beneath which hung grey half moons of flesh. She was probably eighteen or nineteen, although she looked some years older at the moment. Her long dishwater blond hair fell in flat strings past her shoulders; her cheeks, the color of dirty teeth, appeared to be sucked in below razor sharp cheekbones. She wore a filthy old olive drab jacket that looked three sizes too big for her frail, bony frame and a pair of jeans full of holes and she stood shivering in the warm spring night, hugging herself as if she were cold.

Bill knew instantly that sex was out of the question. Even if she
were
a lot lizard—although he suspected she was nothing more than a desperate drug addict—it was obvious that she did not possess the energy to rut around in his sleeper.

He threw the door all the way open and stepped down beside her, saying, "You okay, sweetheart?"

"Yeah, but
you
look like you need the company of a
doctor
, honey. You okay?"

She lowered her head and laughed breathily at the pavement. "Well, I'm kinda...hungry." Looking at him again: "We, um...broke down. We were stranded for a long time and there was nothing to eat and..." She shrugged, still hugging herself tightly.

"You need something to eat?"

He'd lost interest in sex all of a sudden, thinking of his oldest daughter...and of A.J. No one but Bill called her A.J.; he'd always thought it was kind of sweet. He hoisted himself back up into the truck, offering his hand to the girl. "Then you come on in here, sweetie, 'cause I got a bunch of goodies you're more than welcome to, okay?"

She nodded, took his hand and allowed him to lift her into the cab. She weighed nothing.

"I don't have much," he said. "Some chips, some jerky and a few moon pies, but it looks to me like you could use just about anything."

She nodded, never taking her eyes from his as she settled into the seat behind the wheel.

"So where'd you break down?" he asked, fishing through the glove box for the jerky he kept stored there.

"Uh." He handed her the jerky.

The girl held it in her hand, staring at it as if it were something odd that she didn't understand.

"The chips're up here," he said, jerking his head toward the sleeper. Bill moved between the seats and lifted himself up onto the sleeper's bed, groping for one of the bags of chips. He found it, pulled it noisily toward him and began to back out of the sleeper on his knees when he heard the familiar snickering sound of a cassette being pushed into his tape deck. The mournful harmony of the Judds filled the cab and Bill started to turn around when the girl came up into the sleeper with him, crawling over his legs on all fours.

"Maybe in a minute," she breathed, settling down on the mattress. Her face was two inches from his and her eyes seemed three times bigger, or more, than they had a moment ago; they were like polished pennies with flecks of... what?... red?... silver? It was hard to tell... the flecks of color seemed to change, shift, disappear, then reappear. Her lips were dry and cracked and her skin, up close, appeared to be flaking. She'd probably been very pretty before she'd started taking whatever she was taking, hit the road and let herself go like this; she could probably be pretty again with a few good meals, a hot bath and some decent clothes.

"I thought you were hungry," Bill said, surprised by the softness of his voice.

"Oh, okay. Well. I got a jug of water in here, and some cranberry juice. And I think I got some Squirt left." He set aside the bag of chips and began searching around for the warm cans of soda when she touched his arm.

"It can wait," she whispered.

"Huh?" He turned to her again. "But I thought you were thir—"

She placed her hand on his cheek and leaned even closer to him and the colors in her eyes held his attention in an iron grip as she said, "I'm lonely, too."

Bill stared at her for a long time. When she pushed a fallen strand of her unwashed hair from in front of her eyes, he didn't notice; he'd forgotten about her hollow cheeks and unhealthy pallor. All he saw were her eyes. Such interesting, unusual eyes, and... in a strange sort of way...
beautiful
eyes. The flecks of color in them seemed to flare like dying embers coming to life beneath a gush of air.

"Know what I mean?" she asked, her voice a feather against velvet. "Lonely?"

Lost in those swirling flecks of red, copper and silver, Bill took a moment to grope for his voice, then: "Yuh...yeah, I...1-yuh...I thought—"

"Don't worry about it." She brushed her lips over his, soft as a butterfly's wings. "I'll eat." Buried her fingers in his hair and pulled his face closer as she ran the tip of her tongue along the curve of his jaw. "Eventually." Pulling away, she slipped her jacket off and began to unbutton the light blue shirt beneath it, smirking.

She looked different, somehow. Her eyes were brighter. There was something in her face, in the set of her jaw—a liveliness—that hadn't been there a moment before.

Moving mechanically, Bill began to unbutton his own shirt the rest of the way, fighting back thoughts of A.J. and the kids, telling himself that he was lonely, he deserved—even needed— this, that surely A.J. wouldn't expect him to remain faithful to her after all these months of being alone, although he was quick to remind himself that, in spite of countless opportunities, he' d never been unfaithful to her throughout their marriage...and she
still
left! Despite his efforts, though, he could think of nothing but A.J. and his insides writhed suddenly with guilt until—

—the girl leaned forward, her shirt falling open to reveal small white breasts with chocolate colored nipples standing erect, and slipped her hand under his shirt, stroked his chest and abdomen and began tugging at his belt, pushing him down on his back.

Money
, he thought as she pulled his shirt off.
She hasn't mentioned money. ..hasn't even told me her name...and. ..she looked so sick earlier
...

But the touch of her hands pushed those thoughts from his mind and he trembled when, straddling him, she kissed his chest and sucked his nipples between her teeth, then stopped a moment to place her ear over his heart. Bill felt her fingernails dig into his sides, looked down to see her eyes close; the tip of her tongue glistened between tightly closed lips and she began to move on him, slowly at first, pressing her pelvis to his, then harder and more rhythmically, grinding against him as she sighed, "
Aahhh-
hahh
...aahhh-
hahh..." He became erect immediately and responded, pushing his erection up between her legs.

The girl moved down him, pulling his belt frantically, ripping his jeans open and jerking them down, pulling his boots off with them, then removing her own shoes and jeans, until she was naked. She crawled up his body like a stalking cat, her gaze fastened on the bulge in his briefs. She put her mouth over it, nibbled it through the material, making Bill squirm.

He was thinking of nothing now, not A.J. or the kids or his work or what he was going to do without his family...
nothing
. Just her mouth, hot and wet, on his cock...just her strangely cool, satiny skin against him...

Bill was startled when she made a sudden jerky movement and he looked down to see that she'd ripped his white cotton briefs off him in one quick movement; they dangled, tattered, from her clenched teeth until she tossed them aside and plunged her mouth over his erection, moving her head up and down rapidly, holding his testicles snugly in her hand, slipping a finger down to his rectum and pressing gently, teasing him.

He moaned and clawed at the blankets.

The Judds sang on, a different song now...a favorite of A.J.'s...but Bill didn't even hear it; he was swimming in the wonderful wet things the girl was doing to him with her mouth.

She finally mounted him, sitting upright as she moved on him at first, then leaning down to hold his face between her hands and kiss him...to clutch his shoulders as she bit his ear...then his cheek...then, quite suddenly—and, for just an instant, painfully—his neck...