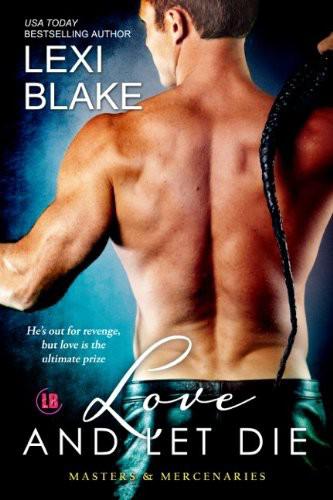 Praise for Lexi Blake and Masters and Mercenaries...

“Lexi Blake's MASTERS AND MERCENARIES series is beautifully written and deliciously hot. She's got a real way with both action and sex. I also love the way Blake writes her gorgeous Dom heroes--they make me want to do bad, bad things. Her heroines are intelligent and gutsy ladies whose taste for submission definitely does not make them dish rags. Can't wait for the next book!”

“A Dom is Forever is action packed, both in the bedroom and out. Expect agents, spies, guns, killing and lots of kink as Liam goes after the mysterious Mr. Black and finds his past and his future… The action and espionage keep this story moving along quickly while the sex and kink provides a totally different type of interest. Everything is very well balanced and flows together wonderfully.”

“A good read that kept me on my toes, guessing until the big reveal, and thinking survival skills should be a must for all men.”

All rights reserved. No part of this book may be reproduced, scanned, or distributed in any printed or electronic form without permission. Please do not participate in or encourage piracy of copyrighted materials in violation of the author’s rights.

I would like to thank a few people without whom nothing in my life works. Thanks to my family—my amazing husband of twenty years, my three kids, and my wonderful mom who always helps out where needed.

Thanks to the best beta readers in the world—Riane Holt and Stormy Pate. And to my dear friends, Liz Berry and Kris Cook, who listen to my every worry and help to lift me up. Special thanks to Shayla Black because we’ve seen some of the places I describe in this book. It’s so much better to see the world with a beloved friend at your side.

But this book is dedicated to the woman who has been there all along, who started Sophie with me and then followed me here.

This book is lovingly dedicated to Chloe Vale.

Excerpt from
Steal the Day
by Lexi Blake

Excerpt from
Wicked All Night
by Shayla Black

Other Books by Lexi Blake

Ian Taggart heard the doctor speaking, but all he could do was stare at the sight in front of him. She’d been alive when he’d left this morning, and now he was standing in the morgue of a London hospital looking at her body laid out on a metal table, covered by the thinnest of sheets. He wanted to smash the glass between them. How was it possible?

Charlotte couldn’t be dead. Not his Charlie. She couldn’t be in that cold exam room while he was standing in the hall staring at her body.

“Mr. Taggart?” The man’s voice grew more agitated, his accent losing its clipped sounds and betraying the fact that the medical examiner was likely from somewhere in the country. “The authorities will need to have a word with you.”

Someone knew about the Irish mission. It was set to take place in a few hours. He was supposed to be on his way to Dublin to meet with the G2 team he had in place, some kid named Liam and his brother, Rory.

Charlotte couldn’t be dead. He’d made love to her hours before, driving into her body again and again while she clung to him. She was the strongest woman he’d ever met, and he’d managed to tame her. He’d managed to get a ring on her finger and a collar around her neck. He’d known the minute he’d laid eyes on her that she would belong to him.

Mine.
His whole fucking being still called out to her. Mine.

“Are you listening, Mr. Taggart?” Ian could hear the voice, but it seemed far away, like someone was talking to him from a great distance.

His vision had narrowed to one thing, blocking out everything else.

God, Sean didn’t even know he’d gotten married. He hadn’t told his brother about the wedding and now his wife was dead. His life was in shambles and he couldn’t even reach out to his brother. Sean was somewhere in Afghanistan. Sean thought Ian was with a team in Iraq. Sean had no idea he worked for the CIA. None of them did. Alex might suspect it, but he would never ask.

Would they even tell his brother that he died in prison or would the US government cover it all up? Would he even die or would he be renditioned somewhere by god only knew who?

He needed to be with her.

One of the technicians moved in and started to close the drawer that held Charlotte’s body. They would autopsy her later in an attempt to prove that Ian Taggart killed his wife. Ian had no doubt that they would come up with all types of evidence against him.

“Don’t you fucking close that!” He slammed his fist against the glass but it didn’t shatter like he wanted it to. It held firm. The tech guy looked like he was about to pee himself though.

And Charlotte was still dead.

“She doesn’t like closed spaces.” She was terrified of really tight places. Something about her childhood. Her father had been a controlling asshole who had tortured his daughters, and one of the ways he’d abused them was by locking them in small spaces. Charlotte hated even being in elevators.

Until he’d wrapped his arms around her and let her hide her eyes against his chest. At first he’d wondered if it had all been a game, a way to seduce him. She seemed to figure him out so easily, but there had been genuine fear in her eyes and her pulse had sped up.

Charlotte was dead. He’d brought her into his life and now she was dead. She hadn’t been safe with him at all.

“Mr. Taggart, the police are here. You have to go with them now.”

The police had escorted him to the hospital, a couple of bobbies who had treated him with some respect, but he had no doubt he would get a visit from the detectives of New Scotland Yard. They wouldn’t be so careful with him. Or someone else would show up, the type of men who didn’t have restrictions on the way they treated a suspect. Men like Ian himself.

God, she was still so fucking gorgeous. Her skin was pale, but it was always pale. It didn’t make sense. She had to get up. She had to walk out of here with him.

If he went with the police, he might be able to be with her again. Maybe all that shit about heaven was right and he would be able to see Charlie. Maybe he could leave everything behind—all the lies and manipulation.

He’d been a different man with Charlotte, a softer man, a man who might have had a future.

God, he’d even thought about children in a vague, undefined way. Just a little fleeting vision of how sweet his Charlie would look with a baby in her arms.

Something touched his right shoulder and he reacted without thought, his elbow coming up and back. He felt the impact, heard the cracking sound of cartilage giving way, and then a flurry of curse words as the nightsticks made their first appearance.

He put his hands in the air, giving up this particular fight. He sure as fuck wasn’t going to get taken down in a goddamn morgue.

Oh, god, he was leaving his wife in a morgue.

He forced the pain down. Someone had killed Charlotte, and it likely had something to do with the operation he was working. He was tracking a Russian national who was attempting to buy nuclear material. Charlotte had ties to the Russian mafia. She hadn’t tried to hide it. She’d shown up at the club he was playing at while he worked in Paris, and he’d thought she would be a pleasant way to spend a couple of weeks and gather intelligence. It was only supposed to be some short-term sex, but somehow it had become more. Then he’d brought her to London with him and she’d been his lover, his wife, his submissive.

Now she was his mistake and someone was going to pay.

He got to the ground because there was nothing else for him to do but comply for the moment. The hall was too crowded for him to move. Once they got him in cuffs, he would only have his legs to work with, but he’d been in worse situations before. He couldn’t let them put him in a cell. The minute he was in a cell, he was a sitting duck.

A million scenarios ran through his head, but at the end of the day, he was alone. This was his operation, and he’d fucked it up.

Cold metal circled his wrists, and he let his body go limp. The cops struggled to get his six-and-a-half-foot frame upright, but he wasn’t going to help. No fucking way. A tired cop was a cop he could get away from. He would let the fuckers drag him the whole way.

A man in a suit and tie walked in. He was different from the cops, but there was no mistaking his authority. He had a partner with him, a slightly smaller male, still tall but leaner. They pulled badges out, showing off their credentials.

Ah, Scotland Yard had finally made their appearance. These men looked like they could handle themselves. These weren’t paunchy, over-the-hill detectives just trying to make their way to retirement. No. These were predators.

The Agency would disavow any knowledge of him. He was utterly on his own. His brother had no idea where he was. His best friend was in Washington working at the FBI.

Ian Taggart would disappear into the system and another operative would take his place.

After a few moments of arguing, the larger of the two men stepped forward, having won the right to the prize at hand—him.

“Come with me,” the big man said with an elegant British accent. Ian bet he wouldn’t lose his perfectly upper-crust sounds when he was angry. He had an aristocratic look about him.

He had to run. He had to find a way to get to his contacts.

Ian looked back at the window as they began to haul him along, but the little fucker technician had shut the drawer, sealing Charlotte away from him.

He was in a daze. His eyes didn’t seem to want to function. His stomach was in knots. He didn’t want to leave her. How could he fucking leave her?

He struggled, reason fleeing. He needed to hold her again. He needed to be sure. Things in his world could be false, manipulative.

“Just a little more, mate.” The man he was walking beside never looked anywhere but toward the elevator. “And don’t bloody well try anything. I’ve had a rather rough night and would like to get home in one piece. I believe my handler would prefer to be the one to take me apart.”

His partner stepped up beside him, a smile on his face as he winked at one of the nurses. “Oh, aren’t you a pretty little bird. Are you sure we don’t have a minute, Damon? I won’t take long, and the Yank there looks like he could use a rest.”