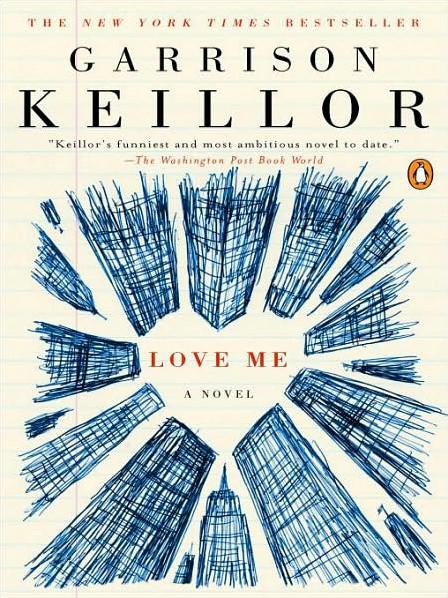 Table of Contents
LOVE ME
Title Page
Copyright Page
Dedication
Epigraph
Chapter 1 - We Met at the U
Chapter 2 - Salad Days
Chapter 3 - Best-Seller
Chapter 4 - An American Guy
Chapter 5 - Lover
Chapter 6 - Gone
Chapter 7 - The Bel Noir
Chapter 8 - The New Yorker
Chapter 9 - What Do You Know?
Chapter 10 - Me and Bill
Chapter 11 - I Become Mr. Blue
Chapter 12 - Crossandotti
Chapter 13 - Calvino
Chapter 14 - Blocked
Chapter 15 - Turkey Lurkey
Chapter 16 - Love
Chapter 17 - Turkey Cont’d.
Chapter 18 - Copenhagen
Chapter 19 - Dear Mr. Blue
Chapter 20 - Turkey Cont’d.
Chapter 21 - Mr. Blue’s Happiness Quiz
Chapter 22 - Lonely Guy
Chapter 23 - Dr. Liebestod
Chapter 24 - Iris Strikes Back
Chapter 25 - Papa’s Poems
Chapter 26 - Alaska
Chapter 27 - War Council
Chapter 28 - Oh, I Was Good
Chapter 29 - Meeting Tony
Chapter 30 - Sobriety
Chapter 31 - The New Millennium
Chapter 32 - Spring
Chapter 33 - Mr. Blue on Duty
Chapter 34 - Pressing My Case
Chapter 35 - Chasing Iris
Chapter 36 - Nothing but You
Chapter 37 - Election
Chapter 38 - V-I-C-T-O-R-Y
Epilogue
For more cleverly hilarious works by Garrison Keillor, look for the
FOR THE BEST IN PAPERBACKS, LOOK FOR THE
Praise for
Love Me
by Garrison Keillor
“Keillor’s forte ... is hitting those wry, eyebrow-arching notes that ring true no matter who you are or where you’re from.... Sharp humor doesn’t always have a heart, yet for all its sly satire and deadpan zingers,
Love Me
is surprisingly touching.... [It] succeeds as light-footed fun, or as social comedy ... Keillor had me laughing.”—
The New York Times Book Review
“If Mr. Keillor’s Lake Wobegon books purport to tell the true stories of a fictional town,
Love Me
tells wonderfully fictional stories of a true town.... Mr. Keillor is deliciously clever in his parodies of New York’s literati, losing none of his trademark wit in the move from Midwest to Manhattan.”
—
The Wall Street Journal
“A hilarious satire of just about everything in the early twenty-first century worth poking fun at.... Like his Midwestern literary predecessor Mark Twain, [Keillor] despises whatever is sanctimonious, self-righteous and disingenuous, going after every sacred cow he can find, with a gleeful but never ill-natured abandon....
Love Me
is unfailingly engaging. Keillor has the great gift of making just about any situation funny by celebrating the very human foibles he is skewering....
Love Me
is Garrison Keillor’s funniest and most ambitious novel to date.”
—
The Washington Post Book World
“Love Me
is in part love story, but it is also a very funny riff, an almost surreal spooling out of American idiom in the great tradition of James Thurber and S. J. Perelman.”
—
The Boston Sunday Globe
“Keillor’s latest novel has as much style as Jean Paul Gaultier’s fall collection, and it’s even funnier.... Bottom Line: Love it.”
—
People
“The charms of
Love Me
are in its flights of doggerel, its high-brow slapstick, its hero’s hapless gumption and bemused lyricism. They make one want to know Larry better.”
—
Boston Herald
“Keillor demonstrates his extraordinary satirical gifts ... with verve, wit and empathy for human foibles.”
—
Times Union
(Albany)
“True to form, Keillor creates lovable characters, lets us listen in on their neuroses, puts them into unbelievable situations, and makes us want to believe them for the sheer enjoyment of the tale.... [H]ilarious.”—
Richmond Times-Dispatch
“Keillor’s inimitable gift for delicately layering humor and honesty, pathos and absurdity, is on full display here. He can write like he’s spreading honey with a straight-edge razor.”
—
St. Petersburg Times
“[F]unny, bittersweet.... Garrison Keillor tickles the funny bone.”—
The News & Observer
(Raleigh)
“[C]atchy, quick ... witty and self-deprecating in true Garrison Keillor fashion.”
-Herald-Tribune
(Sarasota, FL)
“Sweet and touching.”—
The Wichita Eagle
“Wholly entertaining throughout.”
—
The Grand Rapids Press
“With his trademark droll humor, Keillor exposes the foibles of human nature and pokes fun at our more absurd conventions. The icing on the cake is the use of some obviously autobiographical material from Keillor’s publishing experiences in this wry send-up of literary life.”—
Publishers Weekly
PENGUIN BOOKS
LOVE ME
Garrison Keillor is the creator of Lake Wobegon and the host and writer of the Saturday-night radio show
A Prairie Home Companion,
on the air since 1974. He is the author of thirteen books including New
York Times
bestsellers
Lake Wobegon Summer 1956, Wobegon Boy,
and
Lake Wobegon Days,
and editor of the anthology
Good Poems.
He is a resident of St. Paul, Minnesota, and a member of the Academy of American Arts & Letters. He was born in Anoka, Minnesota, in 1942.
PENGUIN BOOKS Published by the Penguin Group Penguin Group (USA) Inc., 375 Hudson Street, New York, New York 10014, U.S.A. Penguin Books Ltd, 80 Strand, London WC2R ORL, England Penguin Books Australia Ltd, 250 Camberwell Road, Camberwell, Victoria 3124, Australia Penguin Books Canada Ltd, 10 Alcorn Avenue, Toronto, Ontario, Canada M4V 3B2 Penguin Books India (P) Ltd, 11 Community Centre, Panchsheel Park, New Delhi—110 017, India Penguin Group (NZ), cnr Airborne and Rosedale Roads, Albany, Auckland 1310, New Zealand Penguin Books (South Africa) (Pty) Ltd, 24 Sturdee Avenue, Rosebank, Johannesburg 2196, South Africa
Penguin Books Ltd, Registered Offices:
80 Strand, London WC2R ORL, England
First published in the United States of America by Viking Penguin,
a member of Penguin Group (USA) Inc. 2003
Published in Penguin Books 2004
Copyright © Garrison Keillor, 2003
All rights reserved
PUBLISHER’S NOTE
This is a work of fiction. Names, characters, places, and incidents either are the product of
the author’s imagination or are used fictitiously, and any resemblance to actual persons,
living or dead, business establishments, events, or locales is entirely coincidental.
eISBN : 978-1-101-12695-0
1. Saint Paul (Minn.)—Fiction. 2. Advice columnists—Fiction.
3. Married people—Fiction. I. Title.
PS3561.E3755L68 2003
813’.54—dc21 2003052540
The scanning, uploading and distribution of this book via the Internet or via any other means without the permission of the publisher is illegal and punishable by law. Please purchase only authorized electronic editions, and do not participate in or encourage electronic piracy of copyrighted materials. Your support of the author’s rights is appreciated.

To the memory of
MARY GUNTZEL
1945-1998
A friend of the helpless.
As you travel day by day
Along your earthly way
Of the faces that you see
Love Me.
On the dark and stormy plain,
In the wind and sleet and rain,
Not a friendly house or tree,
Just Me.
I know you could do better
If you shopped around.
I’m just an old dead letter
Waiting in the lost and found.
I’m not smart or debonair,
Not the answer to a prayer,
But here’s my simple plea:
O darling
My darling,
Love Me.
—The Make Rites (Cunningham/Rasmussen; 1965, Midway Music, Inc. BMI. Used by permission.)
Prologue
Once I was young and virtually indestructible and now I am an old married guy on a January morning on Sturgis Avenue in St. Paul sniffing the wind and taking my vitamins. Six A.M. It’s pitch-black out. Fresh coffee in the air. I take vitamin C, E, B complex, lysine, cod-liver oil, echinacea, with orange juice, which eases the pills down the gullet. I do a few leg stretches, forty crunches, twenty push-ups, a dozen curlies, on the living room floor. I don’t want to struggle when I go to get out of a car. And if tonight my queen should reach over from her side of the bed and draw me to her, I intend to be capable of knighthood.
I look out the kitchen window to get my bearings. St. Paul sits on a bend in the Mississippi, and from my window I see the giant illuminated
1
on the First National Bank downtown and the light in the cupola on the great dome of the Cathedral of St. Paul high on the hill above us. The cathedral sits up there overlooking downtown along with the stately mansions of Summit Avenue that we show to tourists, where James J. Hill, the Empire Builder, resided and next door, the Hampls who made Hamm’s beer, and the lumbering Wey erhaeusers, the O‘Briens, the Pearsons of Pearson’s Nut Goodies, the MacDonald and McNeil families who founded 3M, and the domiciles of their vice presidents and their spoiled children. Sturgis Avenue is a long way down from Summit and Ramsey Hill. Down here are the mechanics and millhands, the laundry workers, the ladies of the cafeterias. Up there the liquor stores stock twenty-year-old single-malt Scotch from the Orkneys and the grocery sells goat yoghurt and eight different kinds of oregano and coffee beans from Costa Rica and in the coffee shops you hear Haydn and people talking about Henry James. Down here people buy Old Overshoe bourbon and season their food with salt and the coffee comes in cans and in the coffee shops people talk about their sister whose husband beat the shit out of her and took off for South Dakota. If it were up to me, I’d be living on Ramsey Hill by sundown tonight, but my wife is a Democrat and I lost that fight a long time ago.
Next door is the house of Mr. Ziegler, who died in September of aimlessness, now owned by a hard-working young couple who don’t smile when they see me. Apparently they don’t know I’m a former famous author and I write the twice-weekly “Mr. Blue” column in the Minneapolis
Star Journal
(Romance going sour? Boyfriend acting weird? Wife ignoring you? Ask Mr. Blue.)
They are delivery truck drivers, judging by their dark brown convict uniforms.
Dear Mr. Blue, My wife and I live next door to an older man who is always staring over our way. Should we say something? Suspicious.
Dear Suspicious, It can’t hurt.
I attained old married guyhood despite some outstanding bad behavior on my part and an unsuccessful lunge at fame and riches a long time ago. There was a fairly popular novel,
Spacious Skies,
and an apartment at the Bel Noir on Central Park West in New York and an office at
The New Yorker
with a drawing on the wall above my desk that James Thurber scrawled there years ago with a carpenter’s pencil. A thoughtful dog with a harpy standing over him, saying, “I know what you’re thinking and the answer is No, No, No.” J. D. Salinger’s office was down the hall and J. F. Powers’s and S. J. Perelman’s. John Updike smiled at me in the hallways. Calvin Trillin took me to lunch. The great editor William Shawn became a pal of mine. Him and me went barhopping and got so soused we had to hold each other up. God, I loved that man. We played golf and sailed his boat, the
Shawnee,
through the Verrazano Narrows and out to sea and fished for grouper. I was in New York for six years and Iris almost divorced me, on grounds of emotional distance, but then I wrote a wretched second novel,
Amber Waves of Grain,
which bombed so badly she took pity on me and called off the dogs. I came down with a brutal case of writer’s block. Wrote one sentence of
Purple Mountains’ Majesty
and quit. The sentence was: “He and the Mrs. dreamed of alabaster cities but here they were in St. Paul and what could they do but cry in their soup?” Couldn’t write worth beans.
ADS
15.4Mb size Format: txt, pdf, ePub