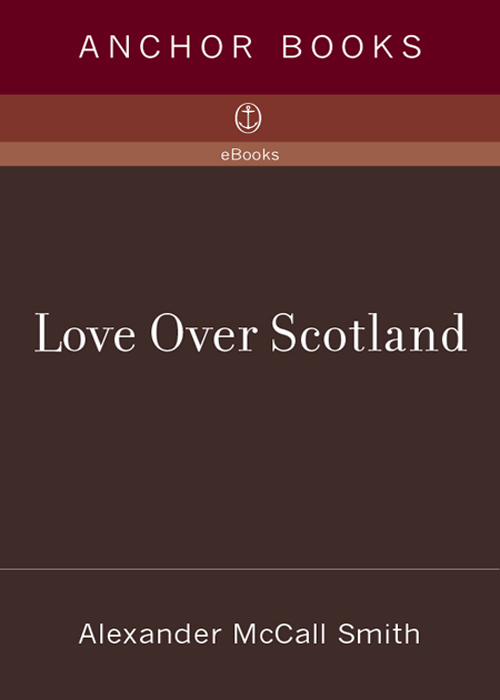 44 Scotland Street: The Story So Far

2. A Picture in a Magazine

5. The Judgement of Neuroaesthetics

7. Angus Goes Off Antonia, in a Big Way

9. The Warm Embrace of the Edinburgh Establishment

10. Does He Wear Lederhosen?

16. How To Let Down the Opposite Sex Gently

20. Truth and Truth-Telling in Gayfield Square

23. The Charms of Neo-Melanesian Pidgin

24. Pat Gets to Know Tessie a Bit Better

33. The Ethics of Dumping Others

34. In the Elephant House

45. A Memory of Milanese Salami

46. A Conversation about Angels etc

56. By the Light of the Tilley Lamp

59. A Person from Porlock

60. An Invitation to Dinner

74. The Principles of Flight

80. An Evening of Scottish Art

86. A Letter to Edinburgh

94. Deconstruction at the Sorbonne

95. A Portrait of a Sitting

99. And Here’s the Train to Glasgow, Again

104. Lost in the Mists Hunting Pirates

Praise for the 44 Scotland Street Series

This book is for David and Joyce Robinson

44 Scotland Street: The Story So Far

At the end of the second series of 44 Scotland Street we saw Domenica leaving for the Malacca Straits for the purposes of anthropological research. We saw Bruce safely departed for London. Now Pat is about to start her course in history of art at the University of Edinburgh. She moves out of Scotland Street to the South Side, but this does not mean that she breaks off all connections with the New Town.

Poor Matthew. Even with the recent substantial gift which his father has given him, he is still restless and unfulfilled. Matthew, of course, would like to be fulfilled with Pat, but Pat does not wish to find fulfilment with Matthew.

In the second series, Angus Lordie got nowhere. He is missing Domenica, though, and hopes that the part which she played in his life will be taken by Antonia Collie, a friend whom Domenica has allowed to move into her flat in her absence. However, Antonia proves to be a somewhat difficult character.

We saw Bertie spending more time with his father, Stuart, who had managed to wring some concessions out of Irene, but some dawns, alas, are false. Irene does not change; to change her would be to deprive this story of the strong air of reality which has pervaded it thus far. For this is no fanciful picture of Edinburgh life, this is exactly as it is.

Pat let her gaze move slowly round the room, over the figures seated at the table in the seminar room. There were ten of them; eleven if one counted Dr Fantouse himself, although he was exactly the sort of person one wouldn’t count. Dr Fantouse, reader in the history of art and author of
The Discerning Gaze in the Quattrocento
was a mild, rather mousy man, who for some reason invariably evoked the pity of students. It was not that they disliked him–he was too kind and courteous for that–they just felt a vague, inexpressible regret that he existed, with his shabby jacket and his dull Paisley ties; no discernment there, one of them had said, with some satisfaction at the wit of the remark. And then there was the name, which sounded so like that marvellous, but under-used, Scots word which Pat’s father used to describe the overly flashy–fantoosh. Dr Fantouse was not fantoosh in any respect; but neither was…Pat’s gaze had gone all the way round the table, over all ten, skipping over Dr Fantouse quickly, as in sympathy, and now returned to the boy sitting opposite her.

He was called Wolf, she had discovered. At the first meeting of the class they had all introduced themselves round the table, at the suggestion of Dr Fantouse himself (“I’m Geoffrey Fantouse, as you may know; I’m the Quattrocento really, but I have a strong interest in aesthetics, which, I hardly need to remind you, is what we shall be discussing in this course”). And then had come a succession of names: Ginny, Karen, Mark, Greg, Alice, and so on until, at the end, Wolf, looking down at the table in modesty, had said, “Wolf”, and Pat had seen the barely disguised appreciative glances of Karen and Ginny.

Wolf. It was a very good name for a boy, thought Pat; ideal, in fact. Wolf was a name filled with promise. And this Wolf, sitting opposite her, fitted the name perfectly. He was tall, broad-shouldered, with a shock of golden hair and a broad smile. Boys like that could look–and be–vacuous–surfing types with a limited vocabulary and an off-putting empty-headedness. But not this Wolf. There was a lambent intelligence in his face, a light in the eyes that revealed the mind behind the appealing features.

Now, at the second meeting of the seminar group, Pat struggled to follow the debate which Dr Fantouse was trying to encourage. They had been invited to consider the contention of Joseph Beuys that the distinction between what is art in the products of our human activity and what is not art, is a pernicious and pointless one. The discussion, which could have been so passionate, had never risen above the bland; there had been long silences, even after the name of Damien Hirst had been raised and Dr Fantouse, in an attempt to provoke controversy, had expressed doubts over the display of half a cow in formaldehyde. “I am not sure,” he had ventured, “whether an artist of another period, let us say Donatello, would have considered this art. Butchery, maybe, or even science, but perhaps not art.”

This remark had been greeted with silence. Then the thin-faced girl sitting next to Pat had spoken. “Can Damien Hirst actually draw?” she asked. “I mean, if you asked him to draw a house, would he be able to do so? Would it look like a house?”

They stared at her. “I don’t see what that…” began a young man.

“That raises an interesting issue of representation,” interrupted Dr Fantouse. “I’m not sure that the essence of art is its ability to represent. May I suggest, perhaps, that we turn to the ideas of Benedetto Croce and see whether he can throw any light on the subject. As you know, Croce believed in the existence of an aesthetic function built into, so to speak, the human mind. This function…”

Pat looked up at the ceiling. At the beginning of the new semester she had been filled with enthusiasm at the thought of what lay ahead. The idea of studying the history of art seemed to her to be immensely exciting–an eagerly anticipated intellectual adventure–but somehow the actual experience had failed so far to live up to her expectations. She had not foreseen these dry sessions with Dr Fantouse and the arid wastes of Croce; the long silences in the seminars; the absence of sparkle.

Of course there had been numerous adjustments in her life. She had left the flat in Scotland Street, she had said goodbye to Bruce, who had gone to London, and she had also seen off her friend and neighbour, Domenica Macdonald, who had embarked on a train from Waverley Station on the first leg of her journey to the Straits of Malacca and her anthropological project. And she had moved, too, to the new flat in Spottiswoode Street, which she now shared with three other students, all female. Those were enough changes in any life, and the starting of the course had merely added to the stress.

“You’ll feel better soon,” her father had said when she had phoned him to complain of the blues that seemed to have descended on her. “Blues pass.” And then he had hesitated, and she had known that he had been on the verge of saying: “Of course you could come home,” but had refrained from doing so. For he knew, as well as she did, that she could not go home to the family house in the Grange, to her room, which was there exactly as she had left it, because that would be conceding defeat in the face of life before she had even embarked on it. So nothing more had been said.

And now, while Dr Fantouse said something more about Benedetto Croce–remarks that were met with complete silence by the group–Pat looked across the table to where Wolf was sitting and saw that he was looking at her.

They looked at one another for a few moments, and then Wolf, for his part, slowly raised a finger to his lips, and left it there for a few seconds, looking at her as he did so. Then he mouthed something which she could not make out exactly, of course, but which seemed to her to be this: Hey there, little Red Riding Hood!

Paradise Gold: The Mafia and Nazis battle for the biggest prize of World War II (Ben Peters Thriller series Book 2) by Robbie, Vic
The Folly by M. C. Beaton
The Concubine's Tale by Jennifer Colgan
More Than I Can Bear by E.N. Joy
The Lost Explorer by Anker, Conrad, Roberts, David
Dirty Deal (A Perfectly Matched Novel) (Entangled Brazen) by Christine Bell
Complete Harmony by Julia Kent
Bloodsworth by Tim Junkin
Evil and the Mask by Nakamura, Fuminori
A Betrayal in Winter (lpq-2) by Abraham Daniel