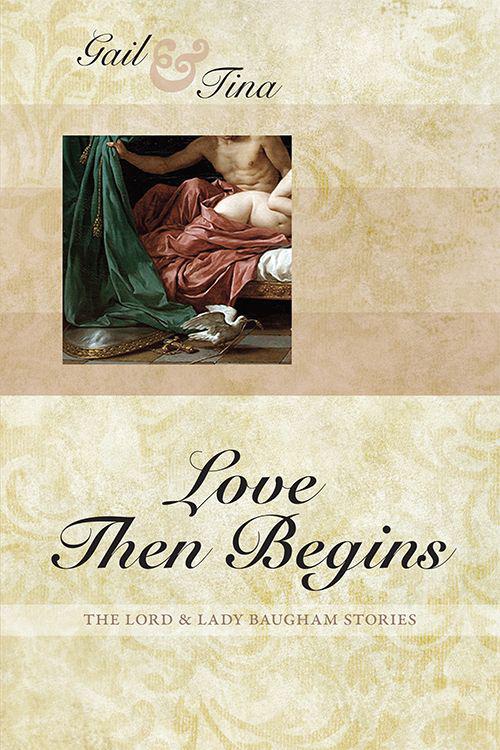 A romance in a tiny Scottish border village at last gives way to a wedding just as the old year gives over to the new. This short story, the second in the Lord and Lady Baugham series, bridges Twixt Two Equal Armies and its sequel, The West Yet Glimmers, by chronicling a most rewarding honeymoon at Clyne Cottage and how, afterwards, the newly-weds successfully managed to postpone further domestic obligations by turning east instead of west at a crucial crossroads, ending up on the doorstep of Pemberley House in Derbyshire!

This is the story of how Love Then Begins. 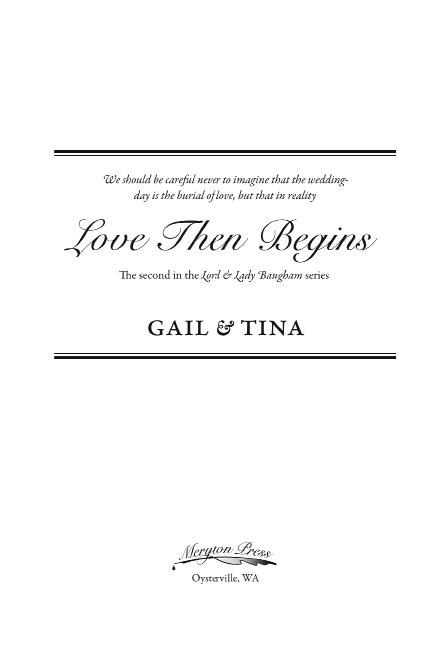 Copyright held by the authors.

Editing and layout by Mary Sharples

“We should be careful never to imagine, that the wedding-day is
the burial of love, but that in reality love then begins its best life;
and if we set out upon that principle, and are mindful to keep it up,
and give due attention and aid to the progress of love thus
brought into the well-ordered well-sheltered garden,
we may enjoy I believe as much happiness as is consistent
with the imperfection of our present state of being.”

Miss Holly Tournier looked at her wedding dress, carefully and perfectly folded away in her armoire with all her other clothes swept aside to make room. She put her hand on it for the tenth time that day and slowly caressed the folds and soft bulk. Tomorrow she would wear it. Having let that thought linger in her head for a few moments and savouring the idea of what else she would do in that dress and how she would look doing it, her practical side ran down the list of what else she needed to remember to put on and wear and carry and she reminded herself once again of where these items were put away.

There was a trunk packed downstairs and her room had been stripped of those personal belongings she would not need tomorrow morning. It made her surroundings seem horribly bare and not a little frightening. She touched the brush and the small jewellery box that still stood on her table and pushed the book she was reading around a little and then decided she did not want to linger in her room—her old room—after all. Downstairs chores and more coloured drawings awaited, but Holly did not feel quite up to working either. To tell the truth, she did not like to even think about Dr McKenna at this moment. They must talk, of course, but in truth, she hardly knew what she wanted to say to him, nor what she should, and even less how she could continue on with her obligations, although she both wanted to and knew she must. He had approached her with the offer to illustrate his
Geological Formations and Features of the Scottish Countryside
at a time when the work was badly needed. Unfortunately, he had developed an attachment to her that she was unable to return, and that had become a touchy subject between her and her husband-to-be. With all the uncertainties surrounding the question, she had no difficulty in deciding to push those thoughts firmly to the back of her mind for consideration another day.

Her mother was also downstairs, just as idle and quiet as herself with no more letters to write and no more reviewing to do. And Mrs Higgins was quiet in her kitchen, having finished carefully ironing her best apron and cap to shining white perfection and run all her errands for the morrow. She sat knitting by the fire, just as sensitive to the non-existent movements of the other inhabitants as they were of hers. The work was over and the celebration not quite here yet.

In the kitchen at Clyne Cottage the wedding cake stood in the pantry, a masterpiece ready to be displayed and then butchered for the culinary enjoyment of a very limited number of guests, the remains to be sent out to friends and family not attending. There was not a single thing left to be prepared or taken care of. Mrs McLaughlin sat at her kitchen table in silence with a cup of tea and looked out of the window. The weather was the one thing out of the scope of her meticulous preparations. Lightly dancing snowflakes twirled around in the wind and fell to the cold ground. There was a chill in the air and the clear sky was rapidly turning from a piercing white to a duller grey. It might turn into a snow storm or it might turn colder—there was no way of telling.

Her husband sat admiring his handiwork in his lordship’s stables. The carriage had been scrubbed and polished and every part examined until it looked almost new. The horses were gratefully standing around in the boxes with their coats brushed to perfection, hooves gleaming and reins greased and cleaned. Mr Riemann, his lordship’s man, lay on his bed and practiced tying one elaborate neck tie for his Master after the other in his head, wondering when he might be able to discuss his lordship’s choice, for Lord Baugham had not been seen all day. Early that morning he appeared in the kitchen bundled in copious layers of warm clothing and announced he was going hunting. Alone. Mrs McLaughlin had no qualms in showing her disapproval, to which his lordship replied that he was damn well going to do as he pleased the last day of his independent existence, and that however much he was looking forward to tomorrow he knew one thing for certain and that was that it would be a very long time before he would be able to, or even want to, venture out at his whim and return at his leisure and therefore would Mrs McLaughlin please stop looking at him like that and pack his lunch.

Of course she did, and as the afternoon shadows grew and the snow increased, he finally made his way home, tired and hungry. Riemann had the good sense to offer him both a bath and supper before broaching the subject closest to his heart—the Oriental or the Ballroom—but his lordship waved him away and said he could ready the bath in an hour and have the supper sent up after that. He still had things to do, he said.

At Rosefarm Cottage the silence of the house broke and Mrs Tournier and her daughter took their dinner early only to retire to the parlour. They spent that evening much the same as any other evening: reading, talking—Holly being affectionate and reassuring, Mrs Tournier scoffing over the incompetence of whomever or whatever happened to raise her objections. But they also laughed and cried a little and Mrs Tournier indulged in a rare moment of talking about her husband and impressed upon her daughter how pleased her Papa would have been at the happiness and circumstance of his daughter. And so Holly cried some more and Mrs Tournier dried those tears and said she truly was her father’s daughter to act so silly in a moment of such great happiness.

Then she dispatched her daughter upstairs to get some rest and make an early night of it, but she stayed downstairs for a long time, silently twirling the locket with her husband’s hair and picture between her fingers.

Holly, upstairs in her little room underneath the roof, predictably enough did not find sleep either. She lay in her bed, smiling even though she could not shake the knowledge that this was her last night in this small but so beloved room. Tomorrow night . . . oh, she could not believe how close it was and how much she ached for it to be even closer! She gave a deep sigh and sank into her bed while she closed her eyes picturing him before her, with that frightening yet compelling look in his eyes and what would come next . . .

She gave a start at the sudden sound of a hard rain falling upon her window. It stopped immediately and Holly was puzzled. Then suddenly a grin spread over her face and she threw off her covers and tiptoed to her window. She then opened it and swiftly threw a shawl over her shoulders against the cold air.

“
Nought will I have, not a window-pane, ‘Twixt me and the air and the great good rain
,” she giggled as she looked down and saw her future husband perched on his horse in the garden underneath her window.

He could almost reach her fingertips as he held out his hand to her.

“Well, thank goodness I hit the right window” he said in that laughing, brilliant voice of his.

Her grin never diminished and she let out a pearly laugh. Silently motioning him to wait, she ducked back in and quickly pulled some socks onto her feet and wound a scarf around her neck to defy the cold air outside. When she returned to the window, there he was—eyes sparkling, smiling with mischief and looking so completely adorable that it momentarily took her breath away. She stood still, looking at him and loving him so fiercely that she almost felt she could not bear it.

“What on earth are you doing here?” she asked gently. “How did you get up the garden path? And in this cold weather?”

“No frozen garden path could match my resolution,” he said. “I had to see you. Oh, and to ask you something.”

“I wanted to ascertain your plans for tomorrow. Are you doing anything in particular—say, between nine and ten o’clock in the morning?”

She leaned against the window sill looking down at him and resting her head on her arms. “Yes, I am actually. I’m getting married.”

“Really? Well, what a very lucky fellow he must be.”

“Thank you for coming,” she said softly. “I didn’t expect you to, but I am very glad you did.”

Suddenly he looked sheepish. “I was hoping you wouldn’t mind,” he said. “I mean, this is a little . . . out of the ordinary, I suppose, a foolish little romantic thing. But I had to see you one last time . . . Miss Tournier.”

“I think the day before one’s wedding is the perfect time to do foolish little romantic things.”

He grinned. “I haven’t done enough of those, have I? Well, I promise I will not stop now just because you marry me tomorrow.”

“Considering you have just barely begun,” Holly grinned back, “I should hope you have no intentions of stopping anytime soon, especially after such a promising beginning. A very fine gesture indeed.”

She watched him as he turned his restless horse around in a small circle, manoeuvring back to the window as close as possible, marvelling at his control of the skittish beast on the narrow path shadowed by ghostly shrubs and flower beds, needing only his soft touch and gentle words of reassurance to calm him—the sight gave her a warm feeling of calm and comfort.

She reached out her hand to him, “I wonder . . . have you any more fine, romantic gestures in mind?”

“Well . . . I know some ardent young lovers beg their heart’s desire for a lock of hair to keep next to their heart. And others take to the knife and carve initials into poor unsuspecting trees. But the one thing, which I heartily wish after having only been granted the favour once and under less than favourable circumstances, is to dance with you. Tell me, do you by any chance waltz, my lady?”

“I do not,” she answered, “but I am willing to learn if my husband is willing to teach me.” She leaned forward, her loose hair tumbling over her shoulders and was just able to brush the tips of his gloved fingers with her own bare ones. “I trust you will be a patient and gentle teacher?”