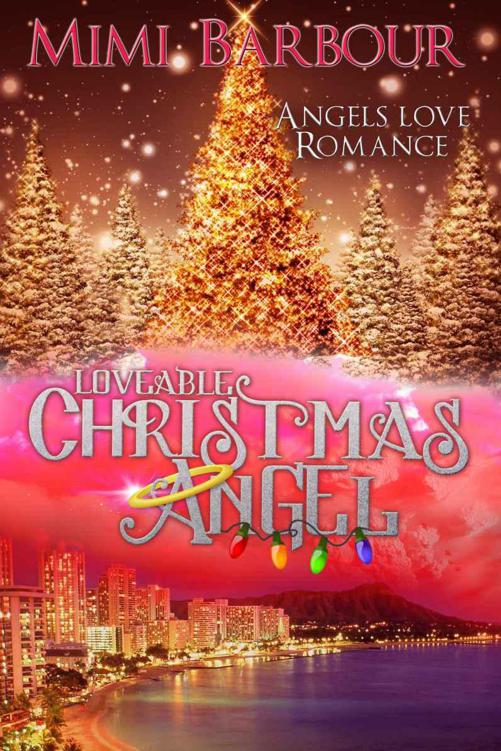 Christmas in Hawaii! How lucky can a girl get? Except Leilani is bringing her mother’s ashes home to Waikiki and has an urgent plea for help from an aunt she’s never even met. After winning two free nights in prestigious Hotel Jordan, things take a turn she never expected. First, she is stuck in an elevator with the prickly, but luscious Mr. Jordan. Secondly, her aunt is a sick woman and only held on for one reason. She wants to pass on her most precious possession… her five-year-old grandchild. The same prickly little fellow that takes one look at Leilani, slaps his fist on his hips and yells, “Go away!”

Kale is the owner of the Jordan Hotel Chain and he can’t believe his rotten luck. He broke up with a spoilt brat of a girlfriend and now he’s stuck in an elevator with a big-eyed, effusive tourist. How in the world can a guy who’s so worldly be hooked on a lively beauty with more dilemmas than anyone he’s ever met?

This book is dedicated to one of my oldest and dearest friends, my mother-in-law, Freda. This angel of a woman has been in my corner from the beginning of my career as an author, and has made every achievement that much sweeter!

“Please, sir. You and your wife take this taxi. She looks exhausted.” Leilani Taylor stepped away from the open door, put her suitcase behind her and waved the older gentleman and his fragile-looking wife forward. As the cab drove up, she’d noticed them in the never-ending line and knew the elderly couple had a long wait before it would be their turn. “Please.” She beckoned them over. “I’ll take your place.”

“You’re an angel, dear.” The older woman patted Leilani’s hand as she accepted help getting into the car. Leilani smiled and made sure the woman was safely tucked in before closing the door.

“Bless you,” said her grateful husband. He hooked his silver-topped cane over his arm and reached to shake her hand. Once they were all secure, the taxi drove away and Leilani stepped back into the place they’d held so that no one would feel put out by her gesture.

Another taxi pulled up across the traffic-filled lanes of the airport shuttle bus area and a small Hawaiian man stepped out. The man looked like an attractive grandpa, his wavy hair snowy white around his face. He wore a traditional, short-sleeved blue shirt decorated with white orchids and around his neck hung a multitude of gorgeous leis.

Painted island flowers decorated the outside of the cutest old coral pink car she’d ever seen; coral pink happened to be her favorite color. He caught Leilani’s gaze when he waved a large sign overhead with her name on it.

Heavens! Now what?
She hesitated to go over and give up her new place in line, but he looked like someone she could trust. Once again, she stepped from the snaking line and made her way over to him. “That’s my name, but I didn’t order a taxi to meet me.”

“The airlines had a contest, Leilani Taylor, and you’re the winner. The hosts were supposed to tell you on the plane. They must have forgotten. You’ve won two nights at one of the most prestigious hotels on the beach in Waikiki, and better still, you have me to drive you there.”

The irrepressible grin on the handsome face of the older Hawaiian forced an answering one from her.
What a loveable character!

In her job as a hospital nurse, Leilani met many strange characters. Inevitably, because of her personality, she tended to like her patients—unless, of course, they did something distinctly unlikable.

This little man’s aura drove a silver stake right into her soft spot and she had the biggest urge to give him a hug. One day she had to stop taking people at face value. Everyone who knew her weakness warned her, but what’s a girl going to do when her heart overrules her head.

“What about my reservation at the Outrigger, aye?”

“All taken care of, young lady. You’re not to worry about a thing.” When he saw her hesitate, he pulled a slip of paper from inside his open window and handed it to her.

The form looked official and her name added to the winner’s line calmed her lingering unease. Indeed, for the first time in her life, she’d won a contest. Considering the bad things that had happened to her recently, it looked as if her luck had changed.

Soon, adorned with the beautiful leis she’d admired from afar, she was ensconced in the back seat of the outlandish vehicle. The moment she’d entered the taxi, she’d relaxed. Swiveling in every direction, she studied the interior and pleasant shock had her mouth hanging open.

Displayed everywhere were the cutest trinkets. Plastic pineapples, palm trees, dolphins and so many other knick-knacks a tourist might use to fancy up a fridge back home. He’d even strung twinkle lights and Christmas ornaments around the front dash. The sight made a laugh bubble up inside until she couldn’t contain it.

Leilani leaned forward to make sure her driver could hear her over the soft Hawaiian music flowing from the radio speakers. “I must tell you how much I love your decorating style. I’ve jazzed up my Bessy, and always thought I was the only person who liked this kind of thing.”

“An old jalopy I’ve had for years. The mechanics groan every time they see me coming, but she just keeps going, and I don’t have the heart to abandon her to a junkyard.”

“I see. You’re attached to a possession made of rubber and steel?” Was that a smile she heard in his voice?

“Heavens, no! But I am attached to the memories it holds. I remember the first time I drove alone. My foot shook with fear and nerves made me grab the wheel so hard I left nail indents in the leather. The van jerked while I raced at twenty-five miles an hour.” A giggle broke loose at the memory.

Leilani continued. “Driving my mother to the hospital the day after I’d finally saved enough to buy the specialized wheelchair vehicle will always be a momentous occasion. No more having to rely on friends or scrambling for money to pay the hospital transfer costs. I swear Bessy seemed to know her way to the carport on the side of our house, because there were many days I drove home exhausted from the nursing academy. I… listen to me ramble on.” She removed her hands from the seat ahead, and leaned back. “Like I said before, the car seems like an old friend.”

“
A kindred
spirit at last. I’ll admit to feeling the same way about Beauty.” He wiggled his eyebrows in the rear-view mirror, and Leilani fell a little more in love with this man’s gentle spirit.

Relaxed now, Leilani cast off the awful dread of arriving in Honolulu alone. That hadn’t been the plan, of course. At the last moment, Leilani’s best friend Shana had backed out of coming along. Not her fault exactly, but procrastination about applying for a passport had the same result.

So Leilani had found herself alone on her very first airline flight, first time leaving home, in fact first adventure that would take her from the safety of the ordinary. ‘Needs-must,’ as her mom used to say. Ignoring the nail-biting, knuckle-clenching panic, Leilani had let Shana accompany her to the terminal. When her remorseful, non-traveling friend reiterated the frantic list of do’s and don’ts, she’d bravely nodded and stepped into the future.

In the back of the coral-colored cab, Leilani snapped from her reverie. “This is my first time away from home. I thought I’d be terrified, but it isn’t nearly as hard as I expected.”

“Good! Don’t you worry, little one. I’ll be around to look after you while you’re in Waikiki. So where is home?” His voice soothed.

Leilani released the stiffness in her shoulders and answered. “I live, um, lived with my mother in a city on Vancouver Island called Victoria. She passed away last week. I… I’m bringing her ashes to be buried in Hawaii. She was born here, left the day she married my father and her wish to return never changed.”

“But she never returned?”

“Something in your voice. There’s a sadness when you talk about bringing her home.”

“You’re right. She never did return. Soon after she arrived in Canada, she became pregnant with me. Then when she and my dad finally managed to save enough money for a trip home, she was involved in a hit and run accident with a drunk driver.”

Not understanding the gushing need to talk about a time she’d previously preferred to forget, Leilani added. “My mother
was
the drunk driver. Her penalty for her stupidity that day turned into a harsh life-changer. The accident left her paralyzed from the waist down and she lived the rest of her life in a wheelchair.”

“Poor angel.” The sorrow in the driver’s voice touched her deeply. “Her heart was broken no doubt.”

“Her heart and her spirit. I was all she had left, after my father decided to leave us. I loved her dearly.”

“Lucky her. Did she appreciate her fortune in having you as her daughter?”

“I don’t know.” The sigh escaped before she knew it formed.

What Leilani did know was that her globby-filled eyes were clearly visible to the driver who spent a lot of time watching her in his mirror. His soft smile drove its way directly to the grief in her soul.

Healing warmth spread throughout her, and Leilani greedily clutched at the feeling. Wiggling her stiff shoulders, she eased tense muscles. Then leaned back against the seat, and peered out the open window at the vehicle-filled, well-lit bridge.

The balmy warm air and ocean scent she’d noticed upon her arrival floated through the window and intermingled with the aroma of the overwhelming sweetness around her neck.

The leis were gorgeous, and a surprise she’d never expected to experience on her tight budget; therefore, they were greatly appreciated. Gathering them gently in her hands, she lifted them upwards. Stroking their velvety petals, she sniffed and enjoyed. Giddy, bubbles of happiness broke through Leilani’s lingering sadness and something deep inside opened wings of joy. Her spirit truly lifted for the first time in days.

Super Flat Times by Matthew Derby
The Christmas Puzzle (Pitkirtly Mysteries Book 8) by Cecilia Peartree
Advise and Consent by Allen Drury
The Gift by Kim Dare
Playing With Fire by Ashley Piscitelli
Jaded Hearts by Olivia Linden
Playing With Fire (Power of Four Book 2) by SF Mazhar
A Valentine Surprise by Page, Lisa
The Dead Room by Ellis, Robert
The Death of the Heart by Elizabeth Bowen