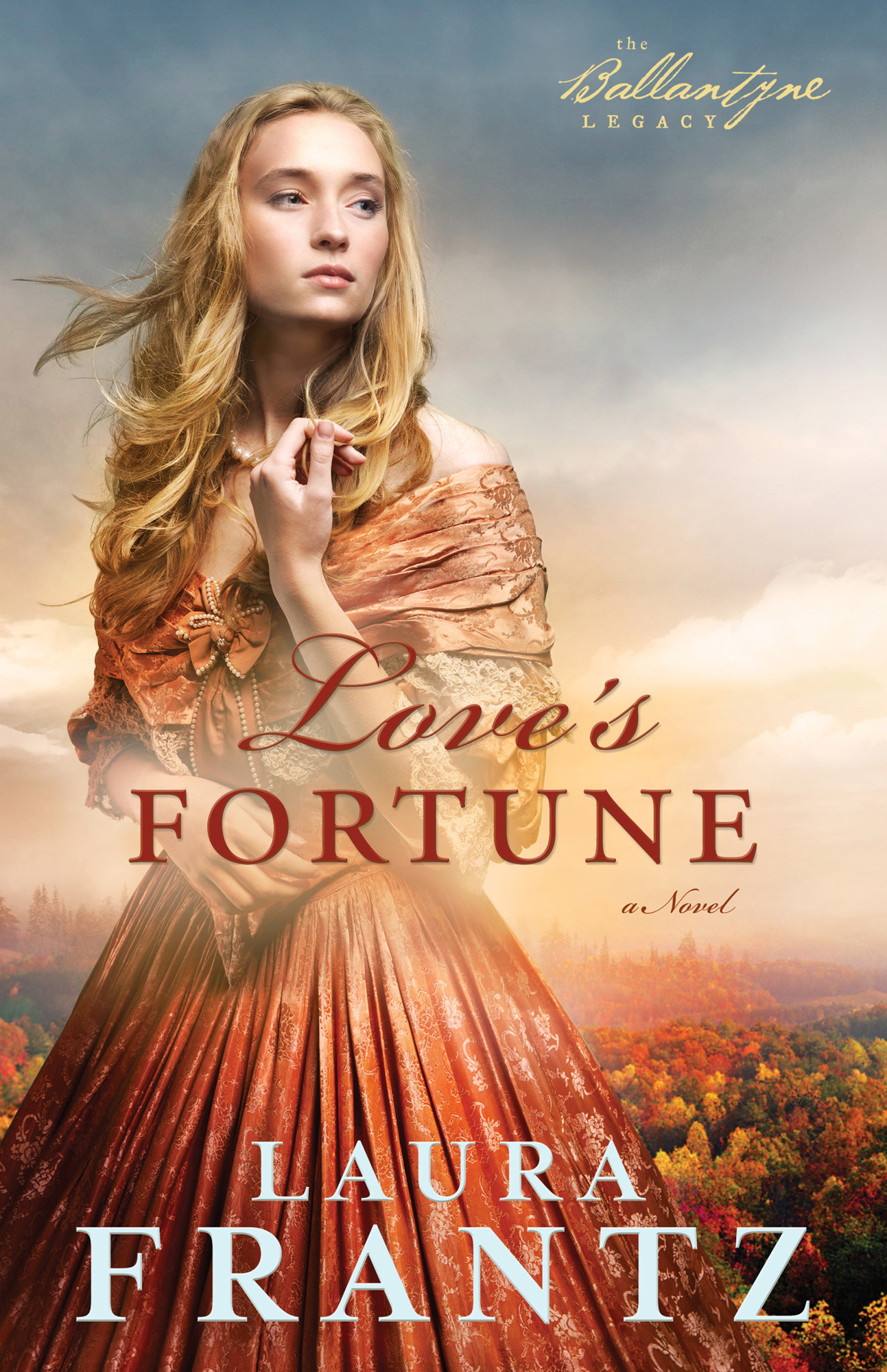 a division of Baker Publishing Group

Unless otherwise indicated, Scripture quotations are from the King James Version of the Bible.

To my son, Paul,
who gives unending joy
on his fiddle

Take I the morning wings, and dwell

in utmost parts of sea;

Ev’n there, Lord, shall thy hand me lead,

thy right hand hold shall me.

So throw off the bowlines. Sail away from the safe harbor. Catch the trade winds in your sails. Explore. Dream. Discover.

For the rest of his life James Sackett would remember this moment. He was just a boy, but he felt full grown. Free. Nearly winged. More master. Like the young man standing beside him.

Ansel Ballantyne placed a firm hand on his shoulder, eyes asquint in the blinding sea glare. “Ready, James? For a new adventure?”

James smiled up at him, feeling close as kin, entwined with the Ballantynes like he’d been. He didn’t look back at Philadelphia’s fading spires and steeples. He looked forward, beyond the ship’s proud bowsprit. To England.

“You’re not missing Pittsburgh, I hope.”

A firm shake of James’s head shot down the notion. “I want to do you proud, sir. I want Mister Silas and Mistress Eden to be glad that I’m with you.”

“You’re good company, James. One day I hope to have as fine a son as you.” Ansel faced the wind’s salty spray, the wearied lines in his face easing. “Mayhap I’ll teach you to play the fiddle while we’re at sea. By the time we arrive in Liverpool, you might well outshine me.”

The prospect brought a keen warmth to James’s chest. Together they stood, of one purpose, looking out on an ocean so wide and blue it seemed the sky turned upside down.

Oh, to be a Ballantyne.

He wasn’t one, but James wanted to be.

Mayhap being a Ballantyne apprentice was a blessed second best.

Soon after, I returned home to my family, with a determination to bring them as soon as possible to live in Kentucky, which I esteemed a second paradise.

The shock of it stole through Wren like ice water. For two years her father’s shirtsleeve had borne a reminder of her mother’s loss, as telling as the lines of grief engraved upon his handsome face. Not once had he taken off the black silk. But all of a sudden it was missing. And Wren ached to know what stirred inside his russet head.

It had all begun with a letter from far upriver. From New Hope. She’d paid the post, wonder astir inside her as she studied the elegant writing.
Ansel Ballantyne, Cane Run,
Kentucky.
They received a great deal of mail, mostly from Europe and the violin collectors and luthiers there, or from Mama’s family, the Nancarrows in England. Not Pennsylvania, with the Allegheny County watermark bleeding ink on the outer edge of the wrinkled paper.

She ran all the way home and arrived at the door of their stone house flushed and so winded she could only flutter the letter in her fingers. As it passed from her hand to Papa’s, she measured his expression.

Sensing he craved privacy, she turned on her naked feet and fled, climbing the mountain in back of their home place till her lungs cried for air. There she sank to her knees atop a flat rock and drank in the last colorful bits of day.

The river before her was no longer blue but liquid gold. Wide and unending, it cradled a lone steamboat with fancy lettering on its paddle box, a far cry from the crude canoe of her childhood. Where it was headed she didn’t know and didn’t want to. Her world began and ended on this familiar mountain and always had.

She didn’t move till her father’s husky voice cut through the sultry twilight, calling her home. The supper their housekeeper Molly made was waiting. Wren darted a glance about the too-still kitchen. No Molly. No letter in sight. Just cold cups of cider and deep bowls of hominy stew and corn bread drenched with butter.

“A bheil an
t-acras ort?”
Papa stood in the doorway to the parlor speaking the Gaelic he’d used with her since childhood, warm and familiar as one of Molly’s hand-sewn quilts.

Hungry, yes. For mourning bands and Mama and explanations of strange letters from upriver. She nodded, sitting
down and waiting for grace. Tears touched her eyes when he prayed. The words were Mama’s own, ushering in her sweet presence again.

“Give us grateful hearts, our Father, for all Thy mercies, and make us mindful of the needs of others, through Jesus Christ our Lord. Amen.”

There was a moment’s hush.

“I’ve news from Pennsylvania.” Swallowing some cider, Papa gestured to the mantel where the letter rested.

“From your Ballantyne kin?” Wren nearly choked asking it, the grit of corn bread crumbs in her throat.

“Aye. It’s been a while since they’ve written. Longer still since I’ve visited. Things there are changing . . .” Misery rose up and clouded the blue of his eyes. He took another sip of cider and then pushed up from his chair, nearly sending it backward. “I fear I’ve been away too long.”

Tossing aside his napkin, he limped out the back door, his old injury tugging at her as he disappeared among fruit-laden trees. In the heat of the kitchen, she was left alone with her clamoring questions.

All her life she’d wondered about their family in western Pennsylvania. She’d heard the romantic tale of how her Scots grandfather, Silas Ballantyne, had come over the mountains the century before and built a fancy brick house for his bride. She was sure the homespun bits of gossip whispered by Cane Run folk had been embellished over time with silken thread. Some sort of trouble had driven Papa away from there more than twenty years before. But that was a puzzle too.

She picked up his bowl of stew, set it in the hearth’s embers to keep warm, and placed his plate of corn bread atop it. Though he’d gone outside, his profound disquiet lingered. She’d not seen him this
afflocht
since Mama’s passing.

Darting a look at the mantel, she sighed. The letter that started all the trouble seemed to taunt her, Papa’s black mourning band coiled beside it, rife with mystery.

Birdsong nudged her awake, just as it had for twenty years or better. Wren could smell coffee—and varnish. Someone was in the workshop situated across the dogtrot at the south end of the house. The instruments they crafted seemed to dry better there, soaking up the sun through the skylight in the vaulted ceiling, the room’s brightness calling out the rich pine and maple grain of the finished fiddles.

She dressed hurriedly and donned an apron, then wove her hair into a careless braid, tying it off with a frayed, pumpkin-colored ribbon. It jarred sourly with her blue dress and brown shoes, giving her the look of a rag rug. She never fussed overlong about her mismatched wardrobe, not caring how she looked. A spill of varnish or a chisel gone awry had wrecked more dresses than she could count.

The workshop door was open wide, revealing a long rack stretching the length of the room, jewel-toned violins strung like beads on a necklace. The smell of varnish wafted strong but not unpleasant, competing with the tang of freshly cut wood. Lingering on the door stone, she swept the shop in a glance. Papa? No, Selkirk, Papa’s apprentice. Straddling a bench, he was carving the scroll of a violin from a piece of pine, his back to her.

“Morning, Wren.” He didn’t so much as glance up, keeping his chisel true to the wood, a dusting of sweet shavings across his breeches.

“The McCoy bow is finished,” she told him. “I rubbed it
with pumice powder and oil just yesterday. But you’ll need to test it first.” She’d lost count of the bows that didn’t pass muster. The instruments they made had to be nearly faultless. Papa’s reputation as luthier depended on it.

“I won’t be making any deliveries today.” Selkirk’s tone was low. Thoughtful. “Your father’s left for Louisville. Something about booking passage upriver to Pittsburgh.”

She went completely still, nearly forgetting how strange it was to be alone with Selkirk without Papa present. Just outside, Molly was stringing laundry on the line.
Mute Molly
, Cane Run folk called her. When small, she’d been choked by a slave trader and robbed of her voice.

Wren fought the catch in her own throat as she fastened her gaze on the instruments adorning the sunny room, not just fiddles but mandolins and dulcimers and psalteries, the work of their hands and hearts. “Pittsburgh sounds right far.”

Kirk shrugged. “Just a few hundred miles easily managed by steamer.” He looked up, his chisel aloft. “Don’t you want to meet your Ballantyne kin, Wren?”

Did she? In truth she rarely thought about them aside from Christmas, when Grandmother Ballantyne sent fetching, impractical packages downriver. An enameled jewelry box. A cashmere shawl. An ivory-handled parasol. Things far above Wren’s raising. “Mostly I forget all about them.”

Kirk gave a chuckle. “Well, they’ve not forgotten you. Fact is, they’ve named a steamboat in your honor. She’s called the
Rowena
.”

Her backside connected with the nearest stool. “You don’t mean it.”

“Aye, I’ve seen her taking on cargo in Louisville. A first-rate steamer she is too, well deserving of your name.”

“Because the Ballantynes name their steamers after the petticoats—er, ladies—in the family.”

“I’m hardly a lady,” she replied, glancing at her varnish-stained apron and hands.

“You might be by the time you come back here.”

The very thought made her smile. She reached for a finished bow and newly strung fiddle, launching into a lively jig as if it could drive the ludicrous thought from the room. But it simply ensnared Kirk, keeping him from his work.

He studied her, mouth wry. “If you tickle their ears with your fiddle, they might well forgive you for Cane Run. The truth is, Wren, you don’t belong here. Not like the Clarks and Landrys and Mackens who settled this place. Your mother’s people are of English stock, aye? And your father, for all his humility and homespun, is still a Ballantyne.”

“I misdoubt I belong there either.”

“How will you know unless you go?”

Because some things the
heart just knows.

“If someone named a boat after me and begged me to come upriver, I’d be the first aboard.” Kirk traded one tool for another. “It’s a bit odd your father seldom speaks of his kin. Makes me wonder what drove him to Kentucky to begin with.”

She rested her fiddle across her knees. “All I know is that Papa left Pennsylvania when he was young as you and sailed to England. He took up with the Nancarrows—Welsh luthiers and collectors—and wed my mother. After I was born they came to Kentucky.”

“Bare facts, Wren. You’d best be finding out before you go.”

She fell quiet, pondering the sudden turn of events, the steamboat
Rowena
, and Louisville, a place she’d never been. “When will Papa be back?”

She was used to his absences. His violin hunting often took him away for months on end. Sometimes Mama had accompanied him, but never Wren. Since Mama’s passing, Papa hadn’t gone anywhere at all.

Why on earth would he now want to return to Pennsylvania?