Lucy and Her Scottish Laird 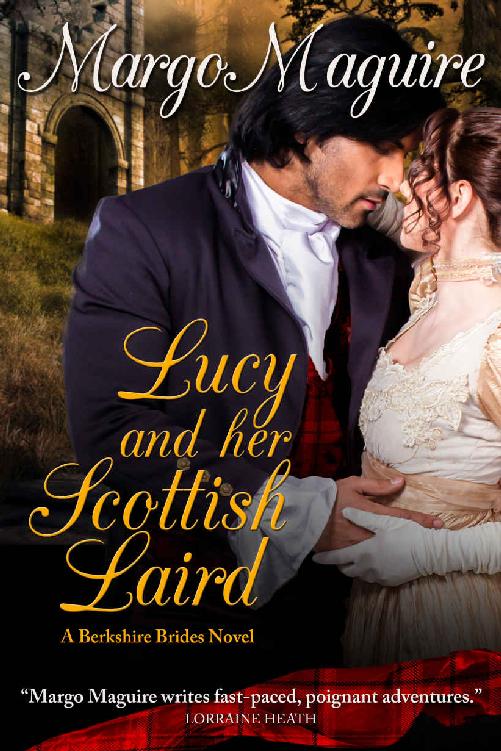 LUCY AND HER SCOTTISH LAIRD ~ By Margo Maguire

This is a work of fiction. References to historical events, real people, or real locales are entirely fictional. Names, characters, places and incidents in
this novel are the product of the author’s imagination, and any resemblance to actual events, locales or persons, living or dead, is purely
coincidental.

This book is licensed for your personal enjoyment only. All rights reserved, including the right to reproduce this book, or a portion thereof, in any form.
This book may not be resold or uploaded for distribution to others.

LUCY AND HER SCOTTISH LAIRD: © 2016 by Margo Maguire

“Mama, you could convince Father, I know you could,” Lucy Stillwater pleaded. One last try to get her father to change his mind about sending
her to Edinburgh with her aunt, Countess Kildrum.

Lucy’s mother had not been well that spring, and she had not yet regained her usual vigor. Lucy was the level-headed one, the bookish one, the one
her mother relied upon to manage the household when she was not up to it. And if she should relapse while Lucy was away—

“It was decided, Lucy. And just so you know, I did try to change your father’s mind. He is convinced the trip to Edinburgh is best.”

“But Calvin will be home soon, and then Samuel—”

“We do not know when your brothers will arrive.”

“But I will be long gone when they do. And Caroline’s child. I will miss the birth of my first niece.”

“Or nephew,” her mother corrected her, although Lucy was certain it would be a girl.

It was horrible. Leaving her family was going to be bad enough, but having to travel with Aunt Arden was beyond the pale. Her father’s sister was
rude and outspoken, but that was the least of Lucy’s worries.

Joshua Parris was here in Berkshire.

They’d all grown up together. Joshua and his two sisters had been regular fixtures in the Stillwater household, as had Eleanor, whose mother had been
ill and died young. After Lady Derington’s death, Eleanor had gone to London to live with her father, and Joshua had gone away to school.

And Lucy had waited. She knew he would realize one day that they were meant for each other. But he would never realize it if she were hundreds of miles
away!

“You can tolerate it for a few months,” Lucy’s mother said. “But I will insist you return home for Christmas.”

Lucy tried not to grimace. Traveling from the far north during wintertime was hardly something to look forward to. But she would take it, even though it
was grasping at straws.

“You must promise to rest while I am gone, Mother. Do not overtax yourself. Let Meg and Emily take over the household duties until you are well
again.”

“Please promise me.” The idea that her mother could die while she was away caused a burning in the pit of her stomach.

“You will enjoy Glencory Castle, Lucy,” Aunt Arden said with her usual authority.

Lucy very much doubted it. They’d traveled so far out of their way to make stops at the homes of various friends and relations that Lucy feared they
would never reach Edinburgh. “I will?”

Her aunt laughed. “’Tis a thirteenth century stone monstrosity situated upon a hilltop where the winds blow incessantly.”

“Why are we going there, then?”

“Because it is the home of our dear friends, Viscountess Glencory and her husband. Glencory Castle is an experience you oughtn’t to
miss.”

Lucy had to admit her curiosity was piqued. She loved old buildings, and there were a few ancient ruins on her father’s lands in Berkshire. As
children, she and her siblings had played in them often, climbing up the broken stone stairs, looking out over the crumbling parapets. When she grew up,
Lucy studied the old castles and read everything she could find about the people who’d lived in them.

“Will we stay only one night?”

Lucy heart sank. She heartily disliked her aunt’s willy-nilly method of travel – of prolonging the days they spent bumping along the road in
the stuffy carriage. She knew chances were good that if they happened to pass through a town, they would stop long enough for Lady Kildrum to shop. Or
perhaps visit someone she knew. Or had once known. The woman had a veritable archive of old friends from her years in Berkshire as a Stillwater daughter,
and from her London Season.

If only they had stayed on course, and on schedule, they would have reached their destination by now. Not that Lucy actually cared about arriving in
Edinburgh. She missed her family already. She’d never been away before, other than her London Seasons, and her mother and sisters had accompanied her
there.

This was entirely different. She did not know what she was going to do once she was in Edinburgh, but there was no question she was tired of traveling. In
all likelihood there were letters from her family waiting for her at her uncle’s house, for they ought to have arrived days ago.

A pang of homesickness struck her so hard it felt like an actual blow to her chest. What if her mother became ill again? She would surely overdo now that
Lucy was away. And Caroline – Lucy had been counting on being with her sister when she delivered her first child. How would Caroline manage when the
baby came?

She pushed open the curtain of the carriage to distract herself and watched the land roll past. But the bouncing of the carriage made her feel queasy. She
knew from experience that reading and sewing inside would do the same. Riding long distances by coach was incredibly boring and slightly nauseating.

“How much further, Aunt?”

“Oh, another hour or so,” Arden replied. “Lucy, you are looking positively green.”

“I
feel
rather green.”

“You are not the heartiest of Stillwaters, are you?” Arden said. “When I was your age, Archie and I rode horseback all the way to
Aberdeen. It was a braw adventure.”

Lucy groaned. She could not imagine anything worse than riding horseback for more than half an hour. Her preferred mode of travel was walking, which was
perfectly suited to life in the Berkshire countryside. And when she walked, there was always the chance of meeting with Joshua Parris.

She could not help but sigh. While Joshua was free to court anyone he chose – Miss Jane Parker, for example – Lucy’s trip to Edinburgh
made it impossible for anything to develop between them. He still saw her as a friend of his youth, although Lucy felt he might have begun to develop an
interest in her. As more than a friend.

If Lucy had known her father would force this trip to Edinburgh upon her, she would have come up with some methods to encounter Joshua more frequently.
Because surely that was all that was needed – time together for him to realize they were perfectly matched.

She did not care that her youngest sister, Emily, had seen Joshua in town escorting Jane Parker to Philburt’s for an ice. Joshua was a gentleman in
every way. He might have seen Jane when he happened to be in Reading, and had done the polite thing. The kind thing.

Because that was how Joshua was. He was the man of Lucy’s dreams.

Things would change when she returned home at Christmas. She intended to show Joshua that she was not just a former childhood friend but the perfect wife
for him. She just wasn’t quite sure how to accomplish it.

They arrived at the castle just behind a group of horsemen racing to the gate, and two more men traveling at a slower pace behind them. Lucy had no idea
that such an out-of-the-way place would have so much traffic.

“It looks as though Lady Glencory is hosting is house party. ’Twill be a good opportunity for you to meet some young people, Lucy.”

“I already know quite a few young people, Aunt.”

“You know exactly what I am talking about,” Arden snapped. “You need a husband, and the perfect candidate could very well be waiting for
you here.”

“A horseman? No thank you.”

“I realize you are not fond of riding, but that does not mean others must forsake the pleasure of riding and racing.”

Of course Arden was right, but Lucy felt out of sorts after yet another long day of being cooped up in this bouncing carriage. She missed her parents and
her sisters. She wanted to be home when her brothers arrived. But no – she was stuck inside this stuffy carriage for four hundred miles. She hoped
their journey would end soon.

They stepped out of the carriage and Lucy turned to glare at the horsemen as they dismounted, laughing, shaking hands, and patting each other’s
backs. As though they were some kind of heroes. For riding horses, for heaven’s sake.

She recognized a few of them. Lord Kindale, for one. He’d been at a house party Lucy had attended a couple of years ago, and had been a very pleasant
companion until he’d been called away to deal with a family situation. And there was Lord Markham, whose red-gold hair reminded her of
Joshua’s, but he was a good bit larger, with a booming voice. A veritable Henry VIII.

One of the two riders at the back – a tall, well-dressed man – caught Lucy’s eye as she followed her aunt and uncle into the castle.
Though he was incredibly handsome, he had a dark, forbidding look about him, like some Viking raider of old. Even so, an absurd shiver of feminine
awareness skittered up her spine. At least, that’s what Lucy thought it must be, though she’d never really felt anything quite so intense
before.

His gaze slid down from her neck to the rest of her, assessing, appraising, until his eyes rested upon her face once again. And appeared to find her
lacking, if his dismissive expression was any indication.

Any allure she might have felt dissipated instantly. She stiffened with indignation and walked into the castle with her aunt and uncle. How dare he judge
her?

Ian Munro, Marquess Broxburn, the only son and heir of the Duke of Craigmuir, was still in a wretched mood when he and his companion, Alec Ferguson, rode
up to Glencory Castle. Any man would feel the same if he’d just received the kind of news Ian had.

He’d been perfectly content at Pentland Manor – his estate south of Edinburgh – when he’d been summoned to Craigmuir Castle by
Alastair MacAdams, his father’s steward. And in a drunken haze, his father had told him—

Hell’s bells, he could hardly even think of it.

As they approached the road leading up to Glencory, a troop of horsemen raced up to the castle. Ian recognized all of them. They were the social set
– young men with titles who went down to London for the season and made the rounds of all the summer country house parties both in England and in
Scotland.

“Good Christ,” he muttered. “The last thing I want is to be drawn into some asinine house party.”

Summer Snow by Nicole Baart
Sarah Of The Moon by Randy Mixter
William Styron: The Collected Novels: Lie Down in Darkness, Set This House on Fire, The Confessions of Nat Turner, and Sophie's Choice by Styron, William
The getaway special by Jerry Oltion
My Place by Sally Morgan
Kandace and the Beast by Shay Savage
Born Cheetah by Zenina Masters
Halloween Submission by Bonnie Bliss
Just Another Day by Steven Clark
Stay by Goodwin, Emily