Lulu Bell and the Birthday Unicorn It's almost time for Lulu's little sister's birthday party. But there's a problem! A pony is running loose and Lulu and her dad, the local vet, have to rescue it.

Can they find the pony? And what will happen if the naughty pony gets into more mischief at the party? It's lucky that Lulu has a plan!

Chapter 7: Lulu to the Rescue

Chapter 8: A Mob of Mermaids

Lulu Bell and the Fairy Penguin

Read all the Lulu Bell books 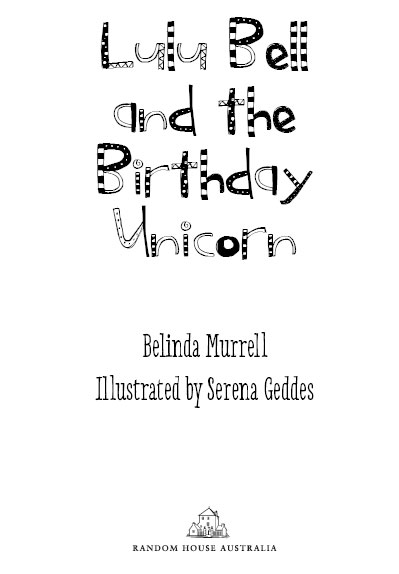 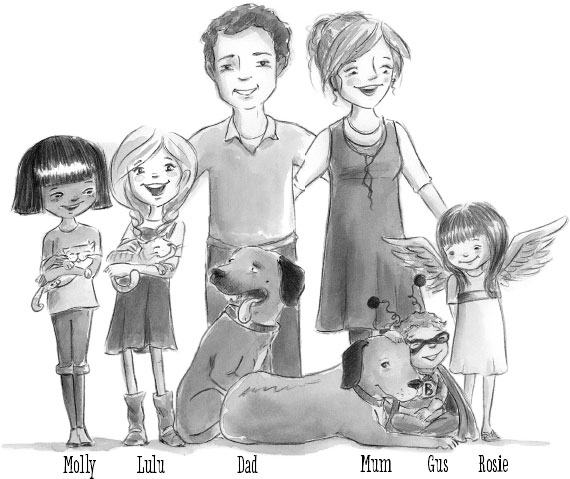 For my mum and dad, who gave me the best possible childhood growing up in a vet hospital. My memories are filled with loving family and friends, exciting adventures and animals, and of course books
.

Lulu and her best friend, Molly, were in the kitchen, helping Lulu's mum. Lulu was adding the final decoration to a mermaid birthday cake, and Molly was spooning chocolate crackle mixture into patty cases.

âDo you think the mermaid needs another pearl in her hair?' asked Lulu.

On a large wooden board was the most beautiful cake Lulu had ever seen.
It was a mermaid with long curly hair made of spun sugar. Her tail was a silvery-green that shimmered and sparkled. She swam upon a sea of crunchy blue lollies. All around her were golden fish and shells. 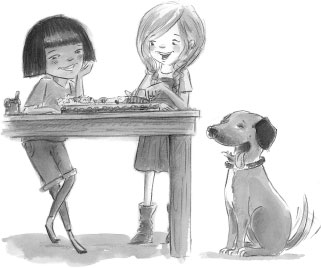 Lulu's mum was an artist. She had
spent hours sculpting the mermaid body and mixing the icing. Lulu had helped to choose the colours. It was just the right cake for her little sister Rosie's sixth birthday party.

At their feet was Jessie, the smiliest dog in the world. Her long pink tongue lolled out and she thumped her tail on the floor.

âIt looks way too good to eat,' agreed Molly. âYou should take a photo of it.'

The girls admired the cake while Mum snapped some photographs. Jessie snuffled around and licked up specks of green icing from the floor. Pickles, one of the family cats, stalked into the kitchen. She hissed at the big brown dog and chased her away.

Over in the corner, curled in her basket, was another dog: Jessie's mother, Asha. She was grey around her muzzle and much quieter than her daughter. She lifted one ear and watched everyone with alert brown eyes.

âGreat, that's done,' said Mum. âWe'll leave it on the bench for the icing to set. Now, we still have to finish the chocolate crackles, make the blue jelly and bake a big batch of brownies.
And
make sure Gus doesn't stick his fingers into anything.'

A loud shout came from the back garden. The door banged open. A tiny superhero ran through the doorway and skidded to a halt right by the table. A pair of brown eyes gleamed through a black mask. They stared straight at the chocolate crackles.

Gus was wearing a red-and-green superhero outfit that Mum had made. It had a long green cloak and green leggings. Gus loved it so much that he refused to take it off â even when he was having a bath.

Lulu glanced at her friend and raised her eyebrows. Molly giggled. Lulu loved her younger brother and sister. But sometimes their antics could be a little annoying. She prided herself on being the practical one in the family.

âI not
'dorable
â I Bug Boy,' Gus shouted. He grabbed a chocolate crackle from the plate and ran off. Jessie chased at his heels.

âGus,' Lulu yelled after him, her hands on her hips. âThat's for Rosie's party.'

The door to the lounge room swung open. It revealed Rosie. A cloud of fine
dark hair framed her face. She wore a white dress, sparkly silver thongs and a pair of feathery angel wings. She was using both hands to carry a big basket of pencils, pastels and paints. 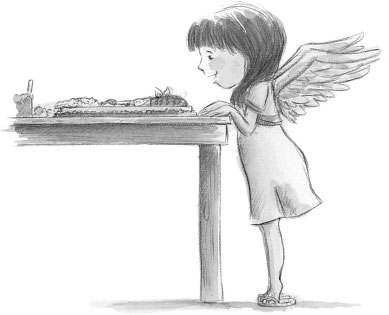 âOooooh,' squealed Rosie. She leaned over the platter. âShe's beautiful, Mum, thank you. That is the best cake I have ever seen.'

Mum kissed the top of Rosie's head. âA pleasure, honey bun. The lolly bags are on the table.'

Asha came to lie under the kitchen table to keep Rosie company.

Next, Lulu and Molly made turquoise-blue jelly. Mum poured boiling
water onto the jelly crystals in the jug and stirred. The girls added the cold water and took their turns to stir. They carefully poured the liquid into sixteen small plastic cups.

âWe have to wait until the jelly is half-set. Then we can decorate each cup with green snakes to look like seaweed,' explained Lulu. âMum thinks it will look really pretty.'

âIt will taste yummy, too,' agreed Molly. She licked a drop of mixture from her finger.

The girls had just slid the tray of jelly cups into the fridge when the phone rang. Mum switched off the mixer and answered it.

She paused, listening to the caller.
Lulu's dad was a veterinary surgeon, and their house was right behind the vet hospital. When Kylie, the vet nurse, was busy with patients, the phone rang through to the house.

âHoney bun, could you please give your dad a message? A pony is running loose on the Parkway,' said Mum. âIt's a busy road and the pony could be hit by a car. We need to send someone up to catch it right away.'

âA pony?' asked Lulu. Her face creased with concern. She had always loved horses and the thought of one in danger worried her. âDad might need some help with it.'

âJust remind Dad that it's Rosie's mermaid party this afternoon. We'll have ten excited six-year-olds arriving in less than three hours,' continued Mum. âYou can go with Dad, but remember I still need your help to make the lolly bags and set up all the games.'

Lulu tucked one of her honey-coloured plaits behind her ear.

âDon't worry, Mum,' said Lulu. âMolly and I can do that when we get back.'

A thick green door separated the vet hospital from the house. When Lulu and Molly closed the door behind them, the familiar smell of the hospital surrounded them â a mixture of disinfectant and animal fur. Lulu loved being here. There were always lots of beautiful animals to talk to.

At the front of the vet hospital, closest to the street, was a big waiting room.
It had a counter, a huge fish tank filled with tropical fish, and shelves of pet products. Behind that were two consulting rooms where Lulu's dad saw his patients. Then there was the hospital ward full of cages for the overnight patients. At the very back were an operating theatre, a store room and a tiny X-ray room.

Kylie, the vet nurse, appeared in the hallway. She was carrying a large fluffy cat in a carry cage. She smiled at Lulu.

âYour dad's seeing a patient in there.' Kylie pointed to one of the consulting rooms. âHe won't be long.'

âIt's an emergency,' explained Lulu. âWe need to save a pony.'

âGo on in then,' said Kylie.

Dr Bell's patient was a pug with a squashed-in face and a curly tail. It yapped furiously as Lulu tapped on the
door. Its owner was an elderly lady. She cooed and stroked the dog. With her big fluffy coat and her own button nose, the lady looked a lot like her pet. 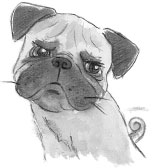 Lulu quickly told him about the escaped pony. Dr Bell frowned and nodded.

âOkay, sweetie,' he said. âI'll just be a couple more minutes with Iggy. Why don't you fill a bucket with feed and fetch a halter and lead, then we'll go.'

Lulu led the way to the crowded store room.

The walls were lined with shelves right to the ceiling. On the floor were big bins of food for every kind of pet you could imagine. On a side table, under a heat lamp, was a closed cardboard box.
Lulu carefully opened the lid. Inside was an orphaned baby brush-tailed possum. She was curled up asleep in a nest of soft flannel.

The possum looked up at Lulu with round brown eyes. Her black whiskers twitched. She scampered over to Lulu and climbed onto the palm of the girl's hand. The long fluffy tail curled around Lulu's arm and tickled her bare skin. 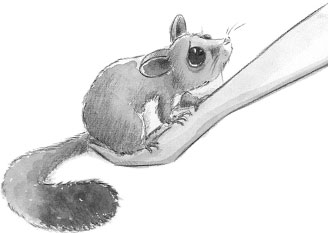 âNo, it's not milk time yet, you greedy guts,' said Lulu. She stroked the possum's back. âI only fed you an hour ago!'

Lulu gently returned the baby to her nest. She tucked the sheet around the body to make a little pouch.

âDad thinks she's going to be all right,' said Lulu. âMum gets up during the night to feed her. And Kylie or I give her a syringe of special milk every two hours during the day.'

Lulu closed the box and checked to make sure the lid was secure.

âDad says possums are amazing escape artists,' explained Lulu. âOnce we had a possum that found his way into the kitchen. He took one bite out of every piece of fruit in the fruit bowl. Mum said it was obviously time for him to return to the wild.'

Molly laughed. âYou're so lucky, Lulu.
I wish we had had lots of pets. Mum will only let me have a goldfish.'

Lulu filled a bucket with grain pellets. Then she grabbed a halter and lead rope from the hook behind the door.

âAll right, Molly,' said Lulu. She hefted the feed bucket. âDo you want to come with us?'

âI wouldn't miss it for the world!'