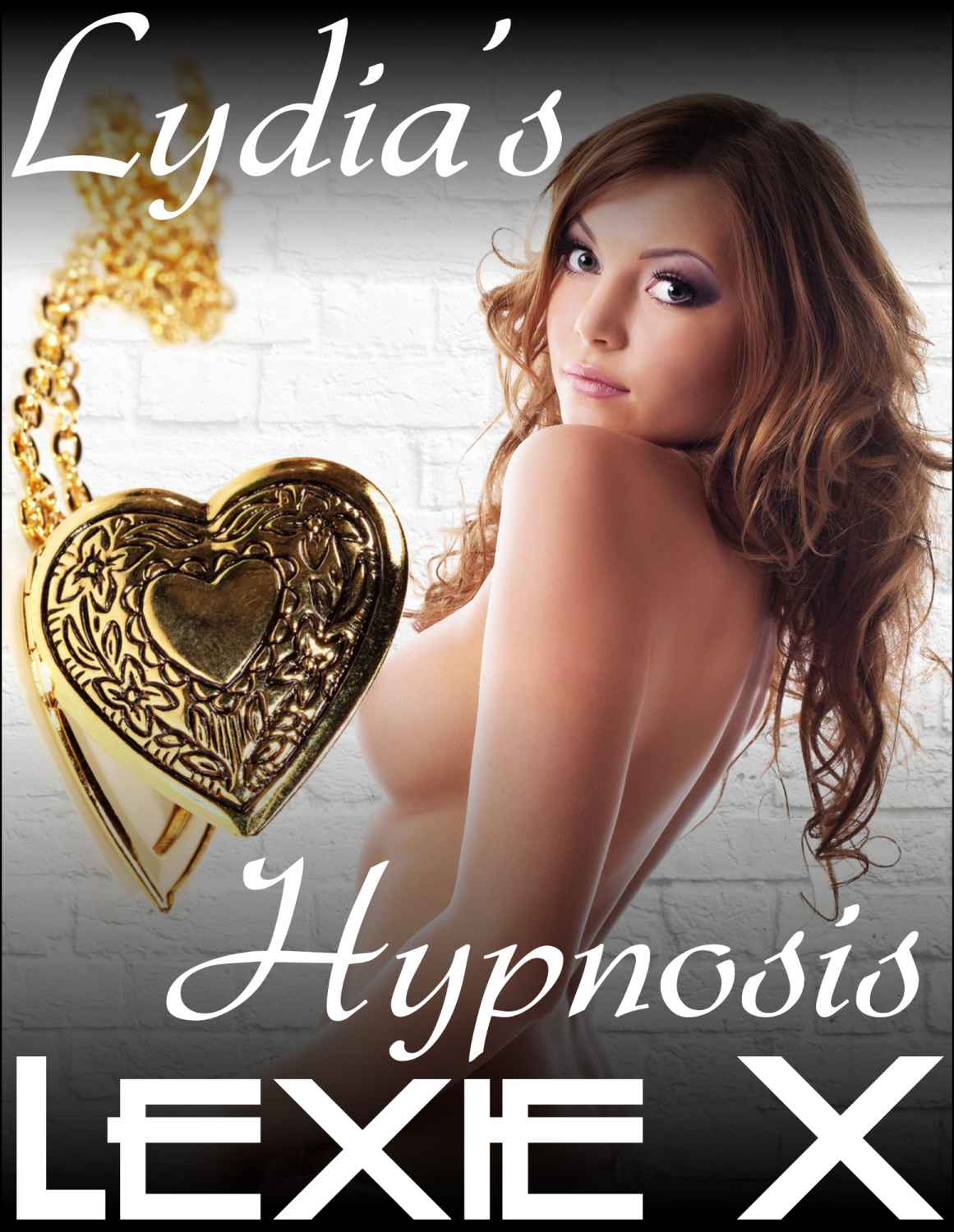 My Kindle author page can be found
here
.

This book is a sequel to
Emma's Hypnosis
.

“Come on, it’s already ten,” she called from the couch.

Lydia frowned. Her girlfriend had acquired a subtle edge in her words lately; an inexplicable irritation that seemed to be slowly rising. She wondered if it was the new angle they’d added to their sex life - the angle she herself had asked for.

“Are you sure you want to do this?” she called upstairs.
“We can do your thing instead tonight, if you want.”

Both having just recently opened up sexually, they’d agreed to act out their
long-unfulfilled fantasies together… but, somehow, they’d never gotten around to Emma’s.

Lydia’s frown deepened. She turned to the young blonde girl sitting on the couch - Bailey, their babysitter. She watched Emma’s ten-year old, Ricky, while they went out on the town. The girl looked up from her study books and adjusted her glasses.

“Has Emma said anything about something bothering her?”

Bailey shook her head. “Nope. Though her tone does seem a little sharper lately… oh, no, I’m back-talking! You won’t tell her I said anything, will you?”

She remained suspicious and unhappy until her girlfrien
d came down the stairs.

“You look gorgeous!”
she blurted - and it was true.

Emma’s shoulder-length brown hair was now dyed black - was that what she’d been doing
at the salon all afternoon? - and her makeup and tight dress had a dark, sharp tone that practically screamed
killer sexy
.

Lydia blinked. If Emma really was bothered by these outings, this was an odd way to show it…

Lydia could see the babysitter’
s neck flush red, and she felt a little surge of jealousy and worry. Back before all this, before any of the three had ever been with women, Bailey had once gone down on Emma… but Lydia had forced herself to be okay with the girl’s continued presence, since it was definitely… probably… a one-time thing.

“
Hey, when’s your girlfriend coming over?” she asked, hoping she didn’t sound too obvious.

Bailey
jumped a little, surprised out of her stare - but then she smiled. “An hour or two. Thanks for letting her study with me, I don’t have much free time after school and babysitting. I wouldn’t get to see her much otherwise.”

Lydia smiled back, feeling a little stupid for worrying.
“It’s no problem, you’re wonderful. Now we can go out ourselves.”

At the bar, and still quite wary, Lydia eyed the array of college students.
She was only a few years older than them, she reminded herself - but they seemed insanely young and immature. Frat guys tumbled and roared all over the place, drinking to excess and making scenes - or was it that she judged males more harshly now that she was with Emma? Men just didn’t seem interesting or attractive anymore, now that she didn’t have to worry about impressing them…

But, no, the done-up sorority girls were just as obnoxious.
Laughing loudly and quite obviously running drama and gossip among their little circles, they reminded her of the neighborhood housewives.

She looked past the obvious groups. There were certainly more people at the college bar than the typical centers of attention.

“See any you like?” Emma asked, scanning the prospects herself.

The first girl they’d picked up two weeks ago sat in the back corner of the bar, looking much different than when they’d seen her. She’d been a blonde sorority chick less than a month ago… and now, she’d dyed her hair brown, and had a lip ring.

“What happened to
her?
” Lydia wondered aloud.

Someone else returned to Diana’s table with a beer - a girl. Small, thin, and cute, she leaned over and kissed Diana deeply. The two girls made out for nearly a minute, oblivious to the hollering of nearby frat guys.

Lydia stared. “She must have
really
enjoyed her experience with us. Is she a lesbian now?”

Emma just took in a sharp breath through her nose and turned away from the sight. “Must be…”

One of the frat guys was not hollering - in fact, he slipped out through the crowd, exiting the bar with a frown on his face. Curious, and a bit worried that it was related to their seduction of Diana, Lydia stood.

“Hey, I’m going to go to the bathroom,” she offered. “Keep looking for some good ones to hit on?”

Emma nodded. With her darker eye lining, her gaze seemed sharper than usual.

Shrugging off the feeling that her girlfriend was changing, Lydia headed for the patio.
She found the guy who’d run off; sitting by himself with an unhappy expression and two beers.

“Hey,” she said politely, sitting near him. “Was that girl
in there - was she your girlfriend?”

He
took a swig of his beer. “She
was.
She went out one night, like two weeks ago, without me… comes back, she’s cheated on me, and a lesbian all of a sudden. Dumps me, just like that. We dated since freshman year of high school, and this is how it ends? Worst thing ever.”

He gulped and frowned heavily. “Yep. You know her?”

“Um, no…” she felt forced to lie. Telling him
that she and Emma had been the ones responsible wouldn’t make him feel any better. “But, for what it’s worth, she’s being obnoxious in there, making out with that girl in front of you.”

“Yeah, thanks,” he muttered.

She left him to his unhappiness and returned inside.

“You know that guy that ran out was her boyfriend?” she said, once back at the table. “She cheated with us, then came out as a lesbian and dumped him.”

Emma tightened her jaw. “That’s too bad. Not our fault, though… it’s Diana’s life.”

“Yeah, but we
could be wrecking relationships here…”

She sighed. “We’re not responsible for that.”

Lydia crinkled her nose up. “What the hell’s gotten into you?”

“No.” She seemed to soften up and relax for a moment. “In fact, this is the biggest thing I look forward to.”

“What’s bothering you then?” Lydia asked, her heart sinking. “Is it… us?”

Emma slid a hand around hers. “No, no, absolutely not! Just life, you know… living comfortably off my ex-husband’s support, no job… I’m starting to wonder what I’m doing with my life.”

Not wanting to feel relief just yet, Lydia continued her questions. “Do you want to get a job? Is that what you’re saying?”

“Maybe,” Emma continued. “I feel like I want to…
be somebody.
Yeah, that’s it. I’ve just been sitting at home and enduring the neighborhood housewives for too long.”

“Definitely,” she replied, looking around the bar with a predatory eye. “How about them?”

Near the door, a
group of four girls were just beginning to sit, shedding their winter coats and purses while scoping out the place.

“
A blonde, a brunette, a redhead, and an Asian girl walk into a bar…” Lydia said suddenly, grinning.

Emma
laughed, curling into her drink mid-sip, vodka spraying up her face. “Lyddy!” She continued to giggle as she cleaned herself up with a napkin.

Her genuine smile
helped Lydia relax. It seemed Emma was still there and still loved her, she was just stressed about life. And who wasn’t?

“Which one?” she asked, eyeing the blonde’s round, pressed cleavage. Diana had been blonde, and the girl last week had been, too… something about young blondes just got under her skin…

Emma put down her napkin, done drying herself off. She donned a naughty smirk. “How about all of them?”

“Wha…” Lydia let her mouth gape as she analyzed the group of girls. “How? And what’s the chances they’re
all
into girls?”

Emma leaned on her elbow, sipped her drink, and looked the four girls over. “It doesn’t matter.
Most girls will try it at least once, right?”

Lydia nodded. “But still, all four?
Together?”

“Alright, I’m game,” she gave in. “What’s the plan? Get all four of them to our hotel room somehow? Get them drunk, and then make a move?”

“Hmm…” Emma contemplated the group’s interactions. The girls got drinks and returned to their table together. “Maybe we just ask them.”

Lydia held her girlfriend’s hand tight. “Wait, I want to come with you this time. You got to seduce both girls before. I want to see you at work. It’s like goddamn magic how quick you are.”

Emma seemed taken aback. “Um… I guess so… but I might have to do some flirty… or strange… things. Forgive me for whatever I do?”

Lydia peered at her suspiciously. “… yeah? whatever you do is fine…”

They went to get fresh liquor drinks before approaching the table. Lydia tried to keep her chest up and her stride poised - she felt like a scared schoolgirl all over again. She wondered if she should have just let Emma do this… the girl seemed to have some magical ability to seduce women - and the seductions
stuck
, too, in Diana’s case… and possibly Bailey’s case? They were both dating women now…

S
he almost tripped at that realization about herself, but she managed to recover and keep walking gracefully. It was true, she realized - once the pressure was off to date and impress men, she’d given it all up with relief… and her marriage had always felt a little forced and loveless…

She
began to smile. A curious warmth spread through her body, and she grabbed Emma’s hand lightly - her girlfriend smiled back at her as they waited for the drinks.