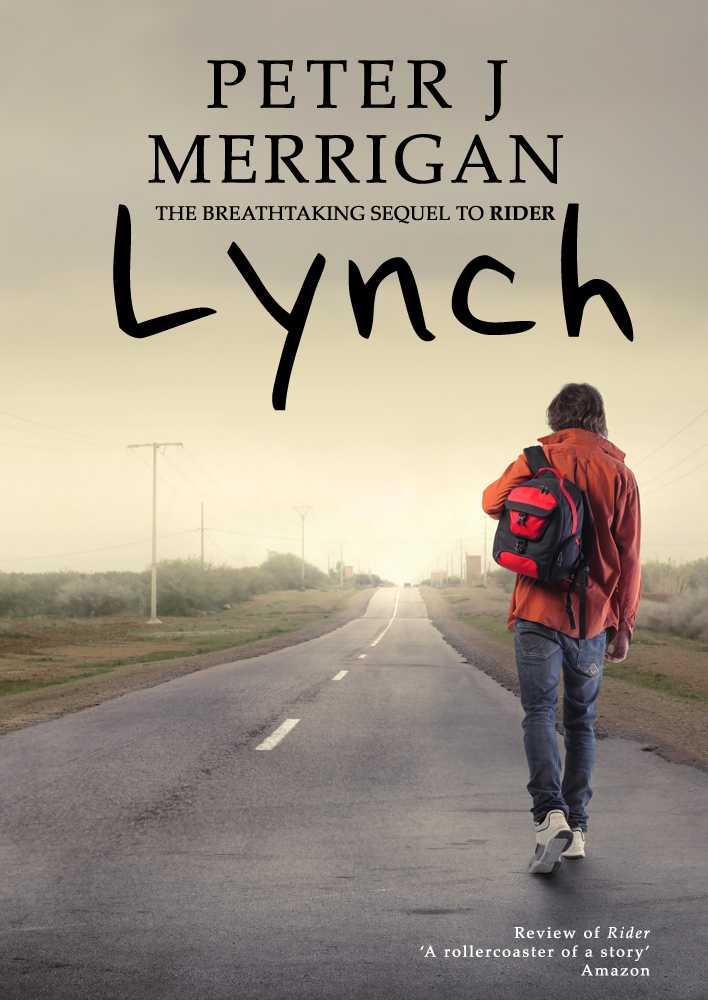 The right of Peter J Merrigan to be identified as the author of this Work has been asserted by him in accordance with the Copyright, Designs & Patents Act 1988.

This publication may not be used, reproduced, stored or transmitted in any way, in whole or in part, without the express written permission of the author. Nor may it be otherwise circulated in any form of binding or cover other than that in which it has been published and without a similar condition imposed on subsequent users or purchasers.

All characters in this publication are fictitious and any similarity to real persons, alive or dead, is purely coincidental.

María Castillo Herrera had tied her hair up in a loose knot at the back of her head and wore tortoiseshell-framed glasses that perfectly complimented her olive skin and brown eyes. As she waited by the security gate to be let into HM Prison Wandsworth, she scored off a mental checklist in her head. She had arrived in
London
this morning as the sun was only broaching the sterile horizon and already she had had two meetings. She had one more to attend to after Wandsworth, and then she would return to her hotel room, report her findings to her boss, and board a flight back to Madrid before being picked up and taken by car to Salas de los Infantes, a three-hour drive she’d much rather do without.

A colossal security guard asked for her credentials when she told him who she was here to see, and he inspected her fake ID with fat, sweaty fingers and saucer-shaped eyes. ‘What does IPCC want with him, Mrs…?’

‘Perez,’ she said. She had created the counterfeit Independent Police Complaints Commission ID three days ago. ‘And it’s a private matter.’ Her English was impeccable, her accent perfected through years of practice.

The security guard nodded and handed her ID back. ‘This way,’ he said.

After she was patted down for security purposes, she was shown into the PACT Centre where she was to wait until the prisoner was brought into the Visitation Room. Among the multitude of information leaflets and smiling staff, there were six other people in the visitors’ centre. A skinny woman with lank hair and a pink velour tracksuit tried with difficulty to keep two young children under control as she clung urgently to a packet of cigarettes in her hand. An elderly man in a grey suit—legal aid, María decided, because his briefcase was new and cheap and plastic—shuffled through some papers on his lap. A silver-haired lady sat at the far side of the room with a much younger woman, perhaps in her early thirties, and both looked as nervous as each other.

María adjusted the collar of her shirt over her suit jacket lapels and placed her leather-bound folder on her knees, her hands on top of it, thumbs touching, fingers straight. One of the unruly children twirled and ran around the room, followed by the other, and when María caught the younger girl by the arm and scowled at her, the girl wilted and fell silent.

‘Sophie! Ashley!’ their mother shouted. She stormed across the room and took both girls by the arms. ‘Sorry, love,’ she said to María. ‘They’re a fucking nightmare. Don’t have any of your own, trust me.’

María flashed a winning smile and said, ‘If your darlings are the fruits of love, I will certainly give it some thought.’

Unsure if she had just been insulted or not, the lank-haired woman dragged her children back to the far end of the room and sat them down.

A prison officer came through and opened a door to the side of a notice board, nodding and stepping back inside the adjoining room. María stood and filed through with the others.

James Stuart Dixon was sitting at the far corner table, looking gaunt and weasel-like. She recognised him immediately from the photographs she had seen, although he had definitely lost some weight. She walked up to him, held out her hand, and said, ‘Mr Dixon. Nice to meet you.’

Shaking her hand somewhat warily, he said, ‘I don’t know what IPCC want with me, but you need to get me moved.’

‘One step at a time, Mr Dixon.’ She sat down opposite him and opened her folder.

‘They’ve put me in with the nonces,’
Dixon
said.

She pulled out her pen and clicked the top. ‘IPCC aren’t responsible for the section you’ve been placed in, I’m afraid.’

‘You can have a word with the governor. A pretty thing like you,’ he said, licking his lips in appreciation, ‘must be able to get what you ask for.’

She parted her full lips and smiled. ‘I always get what I ask for.’

‘However,’ she continued, ‘if they’ve put you in with the high risk category, it’s evidently for your own protection. Forgive me, but no one likes a cop in the slammer.’

At the mention of her name,
Dixon
crinkled his face in disgust.

‘Mr Dixon, I don’t have time for familiarities. I represent an acquaintance of yours who has a few questions for you. Following the outcome of your answers, we may be able to make your stay here more comfortable.’

Dixon
cocked his head and squinted his already small eyes. He was birdlike and reptilian all at once, reminding María of a
duende
, a goblin or dwarf who steals infants in childhood tales from her hometown.

‘Which acquaintance?’ he asked.

‘Currently, that is of no consequence,’ she said. ‘But he sends his warmest regards and hopes your secondment within Her Majesty’s finest establishment is doing you no considerable harm.’

‘I don’t know anyone in the Complaints Commission, so you’re going to have to elaborate a little for me, okay?’

‘The business that brought you to this place,’ María said. ‘What was the extent of your involvement?’

Dixon
shook his balding head. ‘I ain’t saying nothing without my brief.’

His Cockney accent was already grating on her. ‘You were Mr Bernhard’s—what is the word?—lackey? Is that correct?’

Dixon
folded his arms, pressed his lips together, and refused to speak.

‘Listen, you fuck,’ she said, the swear word sounding out of place in her mouth. ‘I’ll only ask you once.’

He glared at her and said nothing, but it was clear he was beginning to see the picture.

María closed her eyes momentarily and sighed. ‘As you have no doubt gathered by now, Mr Dixon, I am not from IPCC.’
Dixon
’s eyes twitched as she continued. ‘But don’t you think that if I can fake something like that to come here and see you, I can also do worse—much worse?’ She raised a hand to stop him from speaking. ‘Have you heard of the rosary pea? It’s a plant native to
India
which contains an extremely potent toxin called abrin. The seeds of the plant are red with a near perfect black circle. Very pretty. Also very dangerous. A small dose, crushed up and undetectable in your porridge is enough to kill you. It would take seventy-five times less abrin to kill you than ricin, in fact. It begins with aggressive vomiting and diarrhoea, progressing to dehydration, and leads to the shutting down of your vital organs and your eventual death. It’s slow and painful.’ She smiled. ‘I have seen its effects, believe me. You do not want to suffer this.’

‘Who the hell are you?’
Dixon
said, his voice raised.

‘Lower your voice,’ María said. ‘Maintain your composure or I could kill you and be out of here before anyone had time to pretend to care.’
Dixon
slumped in his chair and María said, ‘I represent Alberto Ramirez in
Spain
.’

She saw the recognition in his eyes at last. ‘Is he incarcerated?’ he asked.

‘On the contrary, he is free and ready to re-establish operations. Unfortunately, last year’s events in
London
have made for some initial setbacks.’

‘That won’t be necessary,’ María said. ‘All I need from you are your contacts beyond Mr Bernhard, and any accompanying information you can provide.’

‘You can’t come to me with a bunch of questions and expect me to hand over valuable information for nothing.’

‘Sparing your life is not “nothing”, believe me. Many men have breathed their last in my arms. Irrespective of any offer Señor Ramirez does make, you will provide the information requested of you and you will do so willingly.’

‘Some of my contacts are private.’

She laughed, said nothing, allowed the non-verbal threat to linger.

‘Fine,’
Dixon
said. ‘I will give you the information on one condition. Either have me released, or track down Margaret Bernhard and that faggot of hers and bury them alive in cement.’

‘Margaret Bernhard is no threat to operations,’ María said.

‘She had me locked away!’
Dixon
said with indignation.

‘I have reviewed the tape of her video-link evidence in your trial. She knew nothing more than you mistakenly told her the night you were arrested. The way I see it, it is not her fault you are here, but your own.’

Dixon
shook his head in quiet rage. ‘Call it a favour, then. There’s only one thing worse than a cop behind bars, and that’s a whistleblower.’

She was almost late for her next appointment. As much as she would have liked, she couldn’t get her hands dirty inside Her Majesty’s property, and so when she left, Jim Dixon was still alive. For all her threats, her orders had been firm. Her visit to
England
was for information extraction and no more.
Dixon
had provided some valuable contacts which, given his current internment, would prove useless to him but utilitarian in nature to Alberto Ramirez.

Her final appointment on British soil was scheduled for noon at an office in the City. She took a cab and considered walking the rest of the way when they hit some heavy traffic, but she made it to the specified address just in time.

Entering the grand lobby of Weiss Walter Butterford LLP, a respected and top-ranking firm of patent attorneys with eight
UK
offices as well as a base in
Munich
and
The Hague
, María glanced at the large clock above the reception desk, and wore her warmest smile.

‘María Castillo Herrera. I have a meeting with Mr Walter.’

As she waited for Walter to call her through, she looked over her notes from this morning’s other meetings. The first had been with a shipping firm who had dealt primarily with David Bernhard, both importing and exporting crates and containers while keeping questions—and paperwork—to a minimum. María had been pleased with the meeting and assured the owner that business would resume imminently.

The second, a rather brief affair over takeaway coffee, had been with a semi-generous investor, a man who had little interest in how he made money so long as he did—it could be selling anticoagulants to haemophiliacs, providing he made a buck. Her report to Ramirez would be that, while his money had been advantageous in previous operations, she felt his wallet was expendable. A clean-up operative would be brought in and the greedy fat-cat would meet an unfortunate demise; loose ends were unacceptable.

Thomas Walter met her in reception and shook her slender hand with a vigorous pummelling. ‘You’re not at all what I expected, Miss Herrera.’

She smiled politely. ‘And you are quite precisely what I was expecting, Mr Walter.’ From the silvering beard to the portly stomach, his pinstripe suit jacket buttoned and straining to remain closed, he was the archetype bigwig lawyer she had anticipated, regardless of the research she had previously done on him and his firm.

She followed him into a large meeting room, conference table laid with tea, coffee and water, and he motioned for her to sit opposite him.