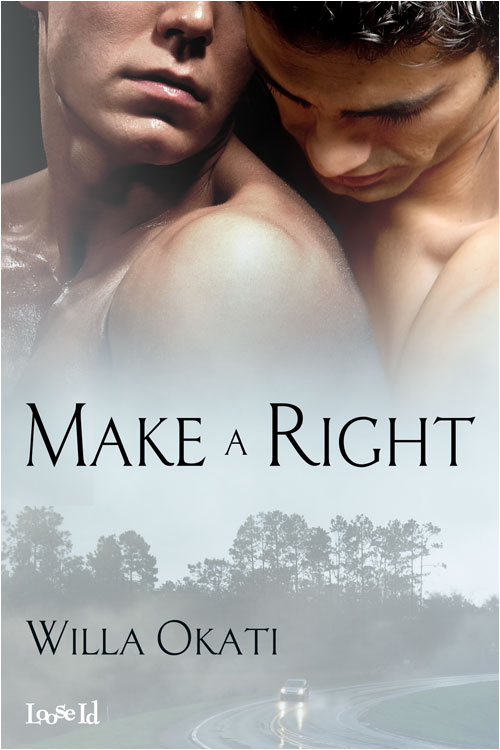 Well. He saw Cade, though Tuck didn’t know his name yet. Kids came and kids went at the St. Pius Reformatory, some of them too fast to remember who they were or get a decent read on them.

Some, though. Some made an impression.

Tuck paused at the door to his room, his key still in the lock, and cocked his head sideways to get a look at the hushed commotion a couple rooms down. New guy. Skinny. Someone had shaved his head almost down to the scalp, leaving him with a dark half-inch shadow. Probably lice. As thin as he was, he’d been living on the streets before he ended up here.

A different sort of kid, this one. Tuck could tell. His face was made up of sharp angles and planes, and he looked ready to lash out at anyone who threatened him, but taken together they did something else: they made Tuck look twice.

And then look again, not wanting to look away and not knowing why. Something about this guy’s face and the way he moved… It caught Tuck and didn’t let go.

Huh
. Guys weren’t supposed to be pretty, but even with the hell this one had undoubtedly been through, there was still something about him that made Tuck want to…he didn’t know what. Anything better than standing there staring like a broken streetlight.

Father Michael had escorted him. Figured. The brothers always sent Michael to deal with powder-keg cases. He could calm down a bonfire, but he had no time for anyone’s bullshit and made sure they knew it.

“St. Pius is a safe place, Cade,” he heard Father Michael say as he unlocked the new guy’s room for him.

“You can lock the door behind you if you like. You can trust us.”

“I’ve known some priests, and I know what a jail looks like even if you call it a ‘reform school,’” Cade said. Stubborn son of a bitch, wasn’t he? He had balls too. Tuck abandoned the pretense of not looking and propped himself on the door frame. What was it about this guy? Watching him made Tuck’s pulse pick up the pace. Made him need to take a deeper breath just to get enough air.

“Do you know us?” Father Michael nailed Cade with eye contact Cade couldn’t dodge. “You don’t. We ask that you give us a chance, as we give you. There are rules, yes. One of them is respect. It goes both ways.”

“Go inside.” He laid his hand on Cade’s shoulder the way a dad would, or dads should, and gave Cade a firm nudge. “We’ll see you at dinner. Six o’clock.”

That was that, no more arguing to be done about it. Michael turned his back to walk away, black robe sweeping the floor in almost silent susurration.

Tuck watched Cade stare after him. Yeah, that took some getting used to too. Trust.

“He’s not lying, you know,” Tuck said. “Father Michael’s a good guy. He only bends the rules that need to be bent.”

Cade whipped around to shoot Tuck a glare. “Don’t lie to me. This is the next best thing to jail.” He scoffed. “Guess I’m lucky. Another couple of months and I’d have gone to the regular lockup.”

“You did get lucky,” Tuck said. “I’m being straight with you here. The way Father Michael runs this place, it’s not orthodox, but damn right it’s safe. It’s home. Not ‘a home.’ Get the difference?”

Cade looked, for a second, younger than seventeen going on eighteen. Lost and scared. Lonely. Not understanding a single word Tuck said. But wanting to. Tuck could see that in him.

He stepped back and offered his hand the way he’d been taught, like a classy kind of guy, even if he knew he was as ordinary a rough-edged street punk as they came. “I’m Tuck.”

Cade hesitated, looking Tuck up and down before he shook his head. He bit his lip and stared down at the key in his palm.

Tuck watched as Cade took a deep breath, lifted his chin, and pushed the door open. He disappeared inside without looking back. Be damned. Scared as a rabbit and proud as a bull. Dangerous and needing someone to look out for him.

Still leaning on the door frame, Tuck propped his weight on his forearm and rested his chin atop it. There was something about Cade…something more to him than the shape of his face that Tuck wanted to look at as long as he liked. Until he figured out the shape of Cade’s—well, his heart, Tuck guessed.

He wanted to look at Cade again, period. Drink him in and figure out the
why
of that too. Understand why Cade made him feel like this, where it all came from, what it meant.

Tuck rapped at Cade’s dorm window, cold and smooth beneath his knuckles and the
tap-tap-tap
he made almost silent. The hours before dawn wrapped the grounds of St. Pius Reformatory in a blanket of black velvet, muffling everything in hushed stillness.

He tapped again, softly, as patiently as he could, searching the frost-rimed glass for a glimpse beyond. Jeez, he hoped he had the right room. The windows were all identical, and the only things he could see were the indistinct blurs of a cheap pine bedroom set and flashes of color that outlined a human shape lying on its side.

Now or never, he told himself. He and Cade had turned eighteen in the last month, and that meant they’d leave St. Pius soon. From what he’d seen, Tuck
thought
he wasn’t the only one feeling a good vibe between them.

And if he didn’t have the balls now to see if Cade wanted him the way he wanted Cade, he’d never have another chance. Finding someone who meant something wasn’t nothing for a kid who’d grown up mostly in foster care, believe you him. If Cade came through, that’d be it for Tuck. He’d go all in.

A guy had to hope, right?

He blew on the glass and drew a letter in the fog from his warm breath.

When the mist cleared, he could see inside.
Score
. Cade lay in the bed, propped on his hip, close enough to touch if the glass weren’t between them. His eyes were open, a gray pale enough to startle even through the night and the window. Looking back at Tuck. Not exactly smiling—Cade didn’t do that often—but not pissed to see him there, Tuck would tell you that much.

Tuck pressed his palm to the window and leaned closer, balancing his weight on the none too steady ledge he’d climbed to.
Hi
, he shaped with his lips and no sound, trying out the grin that he thought had worked before when it came to enticing Cade.
Let me in?

Cade’s mouth lifted at one corner. He nodded slightly.

Excitement and nerves almost screwed the game right there. No matter how cold outside, the ancient wood of the window frame was too warm now, almost slippery in Tuck’s grasp. He grabbed the vines that swarmed all sides of Pius and hung on, swaying from them. The grin burst out on its own this time. He waved a handful of leaves at Cade and mouthed,
check that out.

Cade shook his head at Tuck, but he rolled almost to his chest and reached out, sliding the window latch open.

Tuck’s heart started beating sideways. He hadn’t thought this far ahead. He’d only known he wanted, and that was good enough, but now he was here, and—

And the window was open enough for Cade to whisper to him. Only the flicker of his tongue over his full lower lip gave away his nerves. Man, the things he did to Tuck. It’d freaked him out at first to realize he liked the long, lean planes of a male body and the strong lines of Cade’s face more than he liked cherry lip gloss and breasts.

The more time he spent with Cade, the easier it became to get over himself.

When he figured out he was wanted in return, he forgot he’d ever worried at all.

Cade’s fingertips brushed Tuck’s wrist. Holding him in case he slipped and lost his footing. “Who do you think you are, Romeo?” Cade nodded back at the slim book they’d all been assigned to read in Father Michael’s class, dropped open and facedown on Cade’s bedside table next to a Discman still pumping a heartbeat bass through attached earphones.

“Not even close. Romeo’s kind of a moron.” Enjoying Cade’s surprised laugh, Tuck slipped through the window and onto the bed in an S-shaped movement without needing to touch the floor. He’d been into sneaking up fire escapes, before he left New York. It’d been a while but still, not bad. Nobody beat him at gymnastics here.

Tuck knelt and grinned at Cade. “You moved this closer to the window, didn’t you?” He hoped.

Cade withdrew from Tuck but only far enough to make room for Tuck on the bed beside him. His sheets were soft and body-warm, smelling of soap and shampoo and boy when Tuck stretched out side by side with him. “Maybe.”

Being this close to Cade made Tuck remember the one time he’d been trapped outside during a thunderstorm. Electricity dancing over his skin.

Catching Genius by Kristy Kiernan
The Taming by Teresa Toten, Eric Walters
There Is No Light in Darkness by Claire Contreras
Fledge Star by Titania Woods
08 - The Highland Fling Murders by Fletcher, Jessica, Bain, Donald
Gideon - 05 - Blind Judgement by Grif Stockley
The Noise of Time by Julian Barnes
Tipsy by Cambria Hebert
Girls' Dormitory by Orrie Hitt
Kin of Kings (The Kin of Kings Book 1) by B.T. Narro