Read Malcolm and Ives 02 - Trouble With Air and Magic Online

Malcolm and Ives 02 - Trouble With Air and Magic 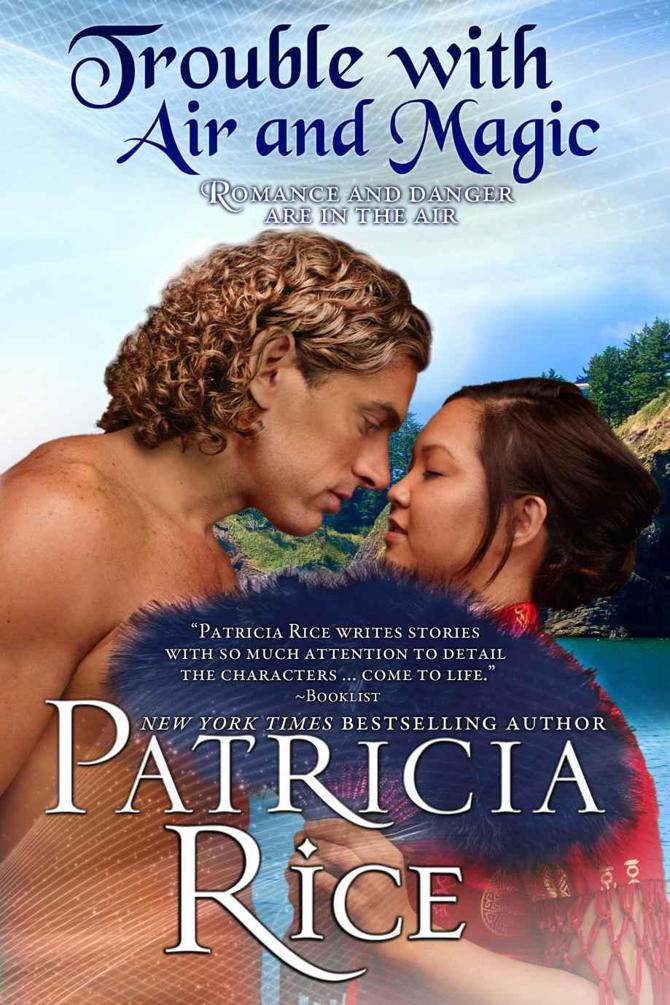 Trouble with Air and Magic

“Shit!” Blurry-eyed from working at his computer through nonstop grief, Conan Oswin squinted at his phone’s text message.

He removed his computer glasses, kneaded his aching brow, and read it again. He lacked a sense of humor at the best of times. Riding on the heels of his brother’s funeral, this damned well wasn’t a time for jokes.
Beware Chinese predators?

His brother was dead and someone thought emailing fortune cookie predictions would make him feel better?

Not until he read the sender’s address did he jerk upright.
The Librarian
.

“I’m gonna get you this time, dammit.” Succumbing to the gut instinct of panic, he sicced his state-of-the-art tracking equipment on the sender, but as always, she blocked him.

He knew the mysterious interloper was a
she
because his sister-in-law’s mother had talked to her. She was the only person Conan knew who had.

Twirling in his desk chair to access his computer, Conan deftly hacked the Adams Technology server the Librarian had used when she’d tagged Oz with creepy messages a few months ago.
Damn
, she’d found another server.

If the irritating mosquito wanted to warn him, shouldn’t she have done it
before
Magnus crashed his helicopter?

Frigging shit. He slammed a drawer shut, and the shelf beside the desk disgorged papers in a landslide of debris. At least he’d got rid of that stinky incense stick his last girlfriend had left behind. It had fallen every time the papers had. Not that the stench of the beer he’d spilled in another avalanche was much better.

He located the last message from the Librarian. It had only said
Circle the wagons
, which sounded a lot like
protect the family
to him. He’d damned well been trying to do that, but without knowing what he was protecting them from, he’d failed.

The Oswin brothers were singularly bad at circling wagons. Over the past few years, Oz, the eldest of them, had lost his first wife to a Mexican traffic accident, his kid to a kidnapper, and their middle brother, Magnus, had gone down in an experimental helicopter malfunction just last week. They had no one enemy to fight.

But his new sister-in-law and her mother were vulnerable in ways Conan had yet to understand. Their family tree of creative Malcolms was littered with loss and tragedy, so
protecting the family
was pretty high on his adrenaline scale.

He didn’t think there was anything he could have done to protect Magnus. His brother had chosen to engage in covert military operations—not a career destined to ensure a long life. But if there was any chance that the accident wasn’t accidental…

What the friggin’ hell was a Chinese predator? A dinosaur out of Jurassic Park? A dragon? Conan hit the search engines but other than a spy plane and Chinese symbols, he found nothing useful under
Chinese predator
.

Had Magnus been flying a spy plane instead of a helicopter, the message might almost make sense. Conan stared blankly at the gray downpour outside his floor-to-ceiling windows. He had to calm down and
think.

As if he were psychic, Big Brother Oz chose that moment to call.

Big Brother might be aberrant but not psychic. Chaos theory had to explain the call. That sounded suitably solid and scientific. “What?” he demanded.

“And good afternoon to you, too, Sunshine,” Oz said. “Pulled another all-nighter, did you?”

“Did you know that out of the ten Malcolms living in California in the fifties, half of them went missing?” Conan said, offering the black humor only another Oswin could accept. “At that rate, it’s a wonder there’s any fruit left on our family tree.”

He was talking about Magnus and the Oswin’s distant relationship to the tragic California Malcolms.

Unfortunately, Oz was married to a Malcolm. In locating Pippa’s family, they’d discovered connections that had kept Conan researching their mutual family disasters out of morbid curiosity.

“Good thing our side of the tree travels,” Oz agreed. “Knock off half of every generation and Pippa won’t have any relatives left, will she?”

“By your reckoning, we probably shouldn’t exist,” Conan said grimly. “Do the math, big brother. If each generation grows up to have two-point-five children, calculating one generation for every twenty years, over the last sixty years, there should still be between thirty and forty descendants of those original ten. Where does Magnus fit into those statistics?”

“That’s not the same,” Oz insisted. “That was his job, not some nutso family superstition.”

Conan rubbed his aching brow and stared at the Librarian’s message but didn’t argue the point. Oz was newly married and trying to be optimistic. Conan wasn’t buying it. The Librarian meant trouble. “Did you have a reason for calling?”

“Aside from contemplating the Disneyland factor of thirty or forty Malcolms like Pippa and her mom walking around with siren voices and Star Trek empathy and other freaky talents? Nah, I just wanted to see if you’d like to do dinner Sunday. Donal thinks you’re the Whiz, and he wants you to come.”

Conan snorted. “That proves your kid isn’t psychic. I’ll try to make it, but I’m after a new Air Force contract. You realize I’ll lose my security clearance if they ever discover I’m buying into the paranormal, don’t you?”

Pippa was the only singing talent in the family. She’d come close enough to killing with her voice that no one wanted to test her. Grinning wearily, Conan conceded the point. “Me singing is not happening in this universe.”

“Then come to dinner. The Air Force can wait a weekend.”

“I’ll see what I can do.” He wanted to tell Oz about the Librarian’s sick joke, but his brother deserved the peace of normality for a change, until Conan had more information.

After hanging up the phone, he rubbed his aching head. He was all for circling the wagons, if only he knew against what.

Shoving back from a desk cluttered with chunks of microchips and soldered memory boards, he grabbed a bottle of aspirin and poured half a dozen into his palm. Chomping them dry, he glared out at the rainy gray fog concealing the beach. No surfing tomorrow.

These days, he burned his excess energy by surfing the net. Returning to his overcrowded desk, he called up the file he’d been working on before the Librarian had interrupted. He’d just hacked the government’s computer files on the experimental flight Magnus had been on.

Once inside the files, he located the list of staff on the project.

The pilot of the helicopter had been half
Chinese
.

Standing in the downpour that had inundated the coast for the past three days, Dorothea Jai-Li Franklin watched another piece of her garden crash into the Pacific. From this distance, she couldn’t hear the splash, just the pounding of the waves against the rocks below. A yew swayed at an angle over the cliff before it, too, gracefully descended in a mudslide to the roaring surf.

She could almost hear her mother crowing from the heavens over the correctness of her prediction about the house’s horrendously bad feng shui.

Her father would still have insisted that the property was a real estate bonanza.

Dorrie simply grieved. Once the house followed the yard, all trace of her mother would be gone. Until his helicopter disappeared, she’d had her brother to remind her of their heritage, but now Bo, too was lost to her. She wiped her tears with her sleeve and bit back a sob before carrying the last of her mother’s prized porcelains to the car.

Her father would undoubtedly disagree with her choice of rescued treasures, but he was in a pricey residence designed for the disabled these days, just regaining his speech, if not his ability to walk. Since coming to live with him at the age of twelve, she’d learned to walk a narrow path between her mother’s teachings and Ryan Franklin’s denials of her weird abilities.

For years, she’d feared her father would divorce her as he had her mother if she revealed any of her woo-woo tendencies. Now that he was in poor health and she had the responsibility of running his foundation, she had to be more cautious than ever.

She tucked the vases in with a few books, her laptop, and Toto, her aging cairn terrier, all she’d been able to rescue before the yard had begun crumbling. With every trace of her mother gone, she would be entirely her father’s daughter. Perhaps the Universe was speaking to her. Perhaps it was time to submerge the dangerous gift she’d inherited from her mother and pretend she was the rational, businesslike daughter her father wanted.

Except years of living with her father’s criticism had sucked away her confidence. And her one moment of courage had left her in a state of fear for years.

Pulling the hood of her billowing rain cape over her rapidly kinking hair, she let the wind and rain gust around her. This was southern California, after all. It wasn’t cold while the sky and earth wreaked their vengeance. Somewhere out there behind those roiling clouds, it was still daylight.

A raindrop slid down her nose, and she wiped it while watching the crumbling cliff. Tilting and swaying, the pepper tree looked to be the next victim of the mudslide. She shuddered as the source of her fear was about to be revealed. Thank goodness there was no one else to see it. Perhaps, if she got rid of the evidence at last…

Holding her temples, concentrating, she located the earth’s energy and shoved at the weakening tree roots with her mind.

Before she could completely grasp the tree’s
chi
, an irritatingly self-confident voice crawled up her spine, breaking her concentration.

“Shouldn’t you be retreating to safer grounds?”

Dorrie scrambled to hold the tree with her mind before it revealed its roots. But it was tilted at an angle she couldn’t correct.

Cursing to herself, she didn’t turn around until she could analyze the intruder’s vibrations and knew whether to welcome him or be wary.

She shivered at the visceral effect of a man she couldn’t see.

Sexy
was her first response to his energy. But that could just be her hormones appreciating the resonance of his voice. His overconfidence could be a hazard, and his lack of sensitivity had destroyed her concentration. She was prepared to be irritated.

Mostly, she was terrified of what he would see as the rain ravaged her garden. She probably ought to start backing away before the pepper tree fell.

Instead, she studied the stranger’s energy with morbid fascination. She seldom had the opportunity to analyze
chi
without other people about, and his was particularly strong. And wild.

As he approached, she sensed the earth force shifting from left to right. Most people produced straightforward energy. Was he pacing back and forth?

The stranger’s
chi
possessed a creative, intriguing layer of energy unlike Bo’s underlying warmth, but like her brother, this man exhibited no-nonsense technical vibrations.

She detected nothing overtly dangerous, however. Powerful, yes, extremely so. But curiosity seemed to be his driving force. Who the hell was he? She dismissed his question, preferring to give him the silent treatment until he stated his business.

“There goes ten thousand in dirt,” the newcomer commented, apparently determined to be tactless. He stood beside her and watched a clump of sod slide away.

“We told my father this would happen, but he wouldn’t believe us,” Dorrie said. “We’re safe for now.” Fatalistically, she watched as the pepper tree tilted and prepared to slip after the sod, taking with it all evidence of her guilt.