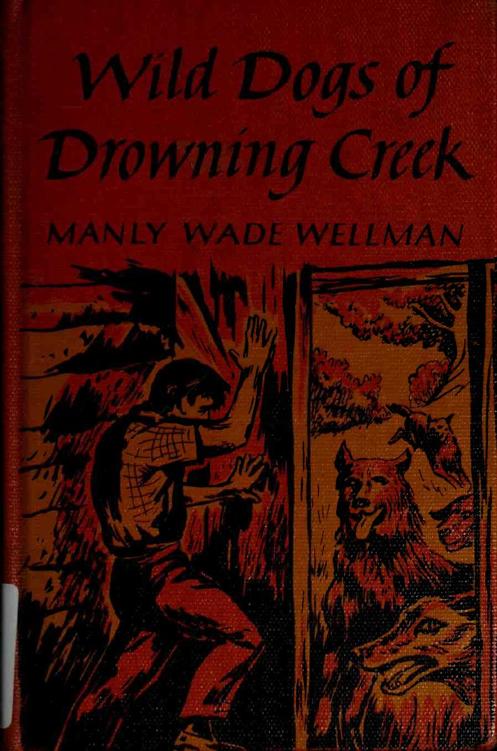 WHO STARTED ME ALONG DROWNING CREEK

SKULKERS
IN THE NIGHT

Long,
loud, and clear
rose
the baying howl in the dark. It
sounded like an outlaw trumpet, calling to raid and plunder. The calm of the
June evening seemed to flee, as though startled.

Randy
Hunter’s tanned young face looked at Jebs Markum’s square ruddy one as they sat
together in the jeep. Each saw in the other’s eyes a nervous mystification.

The
big farmer standing at the roadside chuckled, not very jovially.

“You’re
hearing a wild dog, boys,” he said. “I reckon there ain’t
nobody
in
North
Carolina
tough enough to keep from shivering when he hears that.”

“Tame
animals go wild sometimes, son,” replied the farmer. “There’s a pack of ’em
here in the Drowning Creek country. They’ve given us a sight of trouble lately.
I figure they might be dangerous to more than pigs and chickens, too.”

Again
rose
the bugling howl, from somewhere off in the
swampy timber above which was rising a round full moon. Another dog-voice,
yapping and quivery, joined in.

“Around
here we name that loudest one Bugler,” went on the farmer. He was a sturdy,
healthy man, bareheaded and
dungareed,
and his heavy
black hair had a grayish sheen, like wrought iron. “One or two fellows
has
even seen him. He’s a big scudder, with black spots on
white, and a sharp nose. Now, what did you start asking me when that Bugler dog
sort of butted in?”

“Well,
my name’s James Martin, and yonder’s my place.” The farmer jerked his
iron-black head toward a cheerfully lighted house a hundred yards along the
road. “Chimney Pot—ain’t that the old place where they dug up the money last
fall? Ain’t they building a new house and getting ready to work the land
again?”

“Yes,
sir,” said Jebs. “It belongs to Driscoll
Jordan
. He’s a friend of ours. He wrote that
they’d cut a new road through the woods to reach it, and he wanted us to drive
out with this jeep he’d ordered.”

“I’ve
met Driscoll,” said James Martin. “Likewise that great big tall partner of his,
Sam
Cohill
—the one they say used to be a circus giant.
Sam worked all winter, starting to fix up the place while Driscoll was in
school. They’re good neighbors. I’ve been letting my hired hand, Willie Dubbin,
go over and help them out.”

“But
the road—” began Randy.

“Oh,
sure enough, they’ve got a road. Keep going for half a mile and you’ll see the
turn-off at the right. It’s not wide, but it’s new. You’ll spot it.”

Again
the bugling call sounded, and the night seemed to grow darker by a shade or so.

“If
I was you two,” said James Martin, “I’d go find that house right quick. Willie
Dubbin tells me it ain’t healthy to walk these woods after dark. He hates to
hear the wild dogs singing their hymns.”

The
gray twilight had faded into gloom. Jebs switched the headlights from dim to
full, and they blazed against the rutted clay of the road. “Feels chilly, all
of a sudden, for June,” remarked Jebs. “Hark at that Bugler dog sound off
again. He sounds closer, or maybe I’m getting jumpy.”

“You
and me both,” said Randy. “Why didn’t Driscoll write something about these dog
packs prowling around his old ancestral home? I thought we’d have a nice, quiet
week helping him get things shaped up.”

Suddenly
Jebs craned his neck above the steering wheel.

He
cut the jeep’s speed to a crawl. At the right of the road, a stretch of the
ditch had been filled in over some drain tile. It gave an approach to a narrow
way that dived in among the dark trees. The jeep’s wheels found the ruts,
waddled around a curve, then another curve. The road to Chimney Pot was barely
more than wide enough for the jeep to pass. The heavy foliage, crowding in on
either hand and above their heads, shut out what little light remained.

“This
is just a trail,” said Randy, more to make conversation than anything. “It
reminds me of how the trees jam around and over Drowning Creek. Remember,
Jebs?”

“This
little path twists and curves like a snake,” went on Randy. “Sam must have run
it every which way, to avoid too much cutting work. Say, I’ll be glad to see
Sam and Driscoll again.”

Once
again the bugling howl resounded, and to both boys it seemed almost
oppressively close at hand.

“I’ll
be glad to see ’em, too,” announced Jebs feelingly. “See ’em inside a house,
with bright lights and a good stout door with a big lock on it.”

He
steered the jeep around more curves.

“I’ve
picked up a crazy notion that we’re not moving alone. I keep imagining that
there’s something— a bunch of somethings—trotting along, keeping pace with us,
beyond the trees to each side.”

“I
sure hope it’s just imagination,” said Jebs, “because I’ve got the same
feeling. I wish that Mr. James Martin had hushed up his talk about wild dogs
and how dangerous they might be. This is a kind of open car, this jeep. What if
that big spotted one they call Bugler came hopping in here with us?”

“I’d
hop right out and let him have my place,” vowed Randy.

“Hop
out, would you?” Jebs laughed nervously. “Don’t forget, that Bugler mutt has a
bunch of friends running with him. You might find yourself the guest of honor
among them.”

“Look
there ahead,” said Randy. “Isn’t that light, through the trees?”

“That’s
just your vivid imagination, Randy. It must be nearly three miles to Chimney
Pot, and we’ll have to go farther than that with all these S-curves. What if we
ran out of gas all of a sudden?”

“We
won’t,” Randy almost snapped. “They filled the tank at Carpenter’s Garage in
Pinebluff before we started. We haven’t gone more than thirty miles so far. We
could drive all night on the gas we’re carrying.”

“Maybe
we could, but I don’t crave to,” said Jebs somberly. “Not in woods all busted
out with wild dogs, feeling frisky and hungry and mean.”

“Now who’s got the vivid
imagination?” challenged Randy, but without triumph.

The
thought of a pack of prowling, masterless dogs on a galloping hunt through
dense swampy woods was new to Randy, but none the more welcome for its novelty.
On top of that, this great expanse of timber, uncut and almost unexplored for
nearly a century of North Carolina history, held for Randy and Jebs memories of
strange and sometimes frightening adventure.

It
was here, not far from the woods-cloaked shores of Drowning Creek, that the two
boys had found their fill of excitement. They had helped Driscoll
Jordan
search for the half-forgotten ruins of the
old
Jordan
home and
its
secret of hidden treasure. And
they had found, not only both house and treasure, but also a strange hermit who
was to become their friend—Sam Cohill, the giant ex-star of a sideshow, who
lacked only one inch of being eight feet tall, with a brain and heart big
enough to match his monstrous body.

Now
Driscoll, using the money he had found, was restoring Chimney Pot House, and
Sam
Cohill
was his partner. Randy had meant what he
said about looking forward to a peaceful visit to their friends in the newly
built quarters. He glanced, right and left, at the huge trunks and the
intervening clumps and thickets of brush bordering the narrow, winding road. He
could not throw off the fancy, if it was a fancy, that they were accompanied by
stealthy, watchful beasts, keeping pace just out of sight on either hand.

“Now
I do see a flash of light,” said Jebs after a while. “Maybe it was just the
moon shining on a leaf —there it is again. Wait till we haul around this
curve.”

Randy
peered, too. “I see it. It blinked through the trees yonder. And I never saw a
light that looked any more welcome.”

They
emerged into an open stretch, where the moonlight showed them a meandering
brook, a tributary of Drowning
Creek, that
forced back
the trees on either side of it. The jeep bumped over ruts beside the trickle,
and Jebs turned sharply to cross a rough, sturdy wooden bridge that boomed like
a drum under the tires. Beyond were the lights, plain to see—two comforting
yellow patches at two
windows.

He
drove into the yard, put on the brake, and turned the key in the ignition. The
motor ceased its song.

Just
then, very close to their side, rose a stealthy, menacing growl. Another voice
chimed in just ahead.

In
the gleam of the headlights shone two eyes, bright and green and fierce. Two
more eyes moved slowly forward in shadows beyond.

‘They’re
coming at us, Randy!” warned Jebs, rising in his seat.

Then
rose
a furious snarling war cry. Yet another dog, his
swift white body cleaving the dimness, charged from somewhere
near
the lighted windows.

“That
one’s going to—” Randy began.

But
the white dog drove, not at the jeep but at the two pairs of eyes in front of
it. There was a gasping growl, a click of teeth, and the night was split by a
high screech of pain.

A
tall, wide door flew open between the windows. In its big oblong of light
towered an enormous figure.

“Get ’em, Rebel!” boomed a great
voice they knew, and a lantern swung high in an enormous hand, lighting up the
dark dooryard.

“Who’s
out there?” demanded the big voice. “Look
out,
our
dog’s chasing some wild curs.”