Mark of the Wolf; Hell's Breed 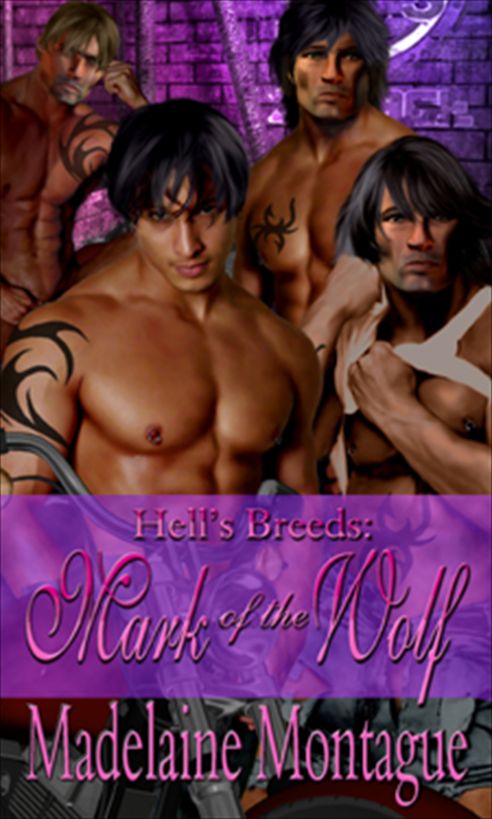 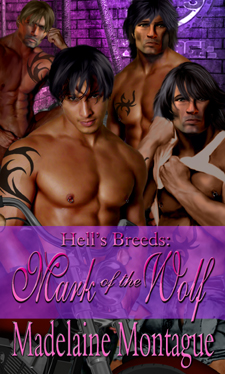 Mark of the Wolf

This is a work of fiction. All
characters, events, and places are of the author’s imagination and
not to be confused with fact. Any resemblance to living persons or
events is merely coincidence.

There was no question about the
precise moment the drop ship entered the planet’s atmosphere. The
troop carrier began to shimmy. The vibrations increased
exponentially as they dropped lower until it reached a point where
it felt like it would liquefy flesh, bones, and teeth, and
everything around them would disintegrate. Then the transport began
to buck wildly. Abruptly, an explosion ripped a hole in the hull
wide enough to suck several troopers and their seats out of
it.

Something strange happened when it
did. Lucien felt an odd sensation creep over him. Almost as if a
faint electrical current was moving through him, his skin prickled
all over, stinging as if ants were crawling over him in a blitz
attack. Time seemed to slow to a halt, almost as if holding its
breath, or as if it was a wheel, slowing to a halt so that it could
be set into reverse. He knew that the hull breach, the flying
shrapnel that peppered every troop close enough to catch a
projectile, the screams, the flying bits of flesh, blood, and metal
that resulted from the impact of the projectiles, and the abrupt
extraction of one entire row of seats and their occupants created
by the opposing forces of interior and exterior pressure occurred
almost simultaneously. He also knew that his brain was quick enough
to record all of those nearly instantaneous occurrences and that
the most likely explanation for why it seemed strange was
shock.

Beyond the fact that he
had been thoroughly trained to deal with this sort of thing and
should
not
have
reacted with shock like those who
hadn’t
been prepared as he was, he
was genetically engineered to resist the kickback effect of shock.
Not that either training or genetic enhancements could completely
eliminate basic animal reaction to threat, but they should have
eliminated any inability to assess and react.

And he felt frozen in time in a way he
shouldn’t have.

He blinked, heard a strange roaring
sound that didn’t seem to be related to the hull breach—because it
occurred milliseconds prior to that—and then he saw everything that
happened in a series of stills. As if he was frozen in time or had
become a mere spectator rather than a participant, he saw the hole
simply appear, the darkness beyond as profound as deep space,
although he knew it was simply the dark side of the world below
them. He saw the stunned expressions on the faces of the four
troops that were sucked out as they flew backwards in their safety
harnesses and vanished in the black abyss.

Panning right, he saw the troops who
had been seated beside them turn their heads very slowly toward the
hole and the strange, disjointed dance several others performed as
holes appeared in their bodies and chunks of flesh, blood, and
pieces of metal slowly jetted from them.

It was more than a slowing of his
visual perception, however. He couldn’t seem to process what he’d
seen. He felt oddly blank, void of emotion, as if he was asleep and
experiencing a nightmare—about an out-of-body
experience.

He tried to shake it off, collect
himself.

Abruptly, he felt the electrical surge
again, this time unmistakable. His heart rate shot upward and he
felt his body tingle with cold and then heat. It felt as if
something inside stirred, something separate from himself. And then
time and his motor functions seemed to abruptly right themselves,
and everything was happening simultaneously around him, too quickly
to process.

Now, instead of feeling as if he was
floating separate from his body and looking down at it, he felt as
if he had two—separate but distinct.

And one was angry. Deep inside he felt
a vibration, almost like a low growl.

A sense of alarm washed over him.
Something was happening to him. He didn’t know what it was, but he
was afraid of it, afraid of the sheer power of it and the sense of
anger and barely leashed violence that seemed to be trying to
escape his control. He strained against his safety harness to twist
his head around enough to assess his team leader, Corporal Lindsey
Merriweather—his human handler. She was staring at the hole, her
blue eyes wide, her face as pale as death, her lips parted
slightly. The frozen look on her face sent a shaft of … something
through Lucien, making his heart jar in his chest, as if it had
lost its rhythm.

The
thing
inside him stirred again,
straining to break free.

“
Lindsey! Are you alright?
Were you hit?”

She sent him a startled
look at the familiarity. Lucien felt his face heat. He didn’t know
that he’d ever even
thought
of her as Lindsey. He didn’t have a clue of why
he’d called her by her first name! Granted, she’d made all sorts of
things go haywire when he’d gotten his first good look at
her—mostly below the waist—but inside of twenty minutes he’d
reassessed Cpl Lindsey Merriweather—daughter of General Lawrence
Merriweather—and realized she was a total hardass and bitch—just
like her old man. Well, not the bitch part. The general was a
fucking bastard. The daughter was the bitch. There was nothing
sweet or soft about her and he’d had no trouble keeping his
thoughts in line.

At least he hadn’t thought he
had.

Maybe it was this weird thing that
seemed to be happening? Maybe it had turned his mind to
mush?

He swallowed a little
sickly.

It wasn’t actually that
farfetched. He was genetically enhanced, but they hadn’t stopped at
human DNA enhancements. They’d used wolf DNA, as well. He’d been
assured it was such a minute DNA bonding that he would never really
notice—it would just improve his vision, his speed, and his
agility—but the thing stirring inside him now wasn’t easy to ignore
and it felt a
lot
like wolf.

If it took over, would he have any
mind at all?

Was that why he was having so much
trouble thinking straight?

Lindsey blinked a couple of times and
then looked down at herself as if she couldn’t assess her condition
without a visual—and her hands. She patted her torso and then
looked at him again. “Damage report,” she demanded abruptly. “Were
you hit, soldier?”

Lucien stared at her blankly, his mind
switching inwardly as it occurred to him to wonder if he could
possibly have been so cocooned by shock that he’d been hit and
hadn’t yet felt it.

There was no pain, though.

Just the discomfort and the uneasiness
that something had gone wrong.

He abruptly abandoned the impulse to
report his suspected condition to his handler.

He was supposed to. He realized, now,
that that was why he’d turned to look at her—not just to assess her
condition, but because he’d been conditioned to report to her if he
had any sort of problems, or suspected problems, stemming from his
enhancement.

She studied him a moment longer, as if
she could read his mind, and then turned to the rest of their
squad. “Damien! Kane! Basil! Any problems?”

“
Aside from a few extra
holes I didn’t have before we took a hit …,” Damien growled, “I’m
just hunky-dory.”

She assessed him. “Flesh wounds,” she
said dismissively. “Patch the suit. Kane?”

“
I think the shrapnel went
through the calf ….”

“
Fuck!” Lindsey exclaimed.
“Medic! Get over here! I’ve got a man down. He isn’t going to make
the jump …. How about you, Basil? Can you make the
jump?”

“
Negative,” Lindsey
snapped. “You’ll just be a liability to the rest of us.”

Don’t get all sentimental and
emotional on us, Lucien thought derisively.

Basil divided a look between them.
“I’m good. Missed me entirely. I think Kane got my
share.”

The ship was still bucking like a
bronco, shuddering and shaking as the tempo of the bombardment grew
steadily. The medic the corporal had summoned bounced off the floor
between them when he finally arrived but managed to right himself.
When he’d examined the blood soaked suit, he unzipped the pant leg
and then dug in his bag for antiseptic. After flushing the wound,
he slapped a coagulation patch on both sides of the calf, over the
entrance and exit holes, to stop the bleeding and then sprayed it
down with liquid gauze. “He’s good to go for now. He’ll have to get
it looked at in med-bay when we get back to the ship, but I’ve
stopped the bleeding. He’s in better shape than a lot of these poor
bastards.”

But not likely to be if he
tried to make it back to the mother ship, Lucien thought angrily.
They were going to be lucky if
any
of them managed the drop. Half the drop ships had
probably been blown out of the sky already. “I think he’ll have a
better chance if we stick together,” he growled.

Lindsey sent him a disbelieving look.
“You challenging a direct order, soldier?”

His lips tightened, but he sent Kane a
speaking look. Kane nodded fractionally and dug a painkiller out of
his med kit, popping it in his mouth and swallowing without water
to wash it down—no easy feat when they were all scared spit-less
from the bombardment.

His squad leader noticed the look they
exchanged and the movement. “Is there a problem, Lucien?
Kane?”

He should have known old eagle eye
wasn’t going to miss the silent communication.
“Negative.”

It wasn’t just the typical
resentment he felt at her commands, Lucien realized abruptly,
although, truthfully, he’d never gotten past getting pissed at
being told when to breathe and when to blink and when it was ok to
scratch his ass. But, then again, he hadn’t
chosen
to be a soldier at all, much
less a grunt at the bottom of the heap. He’d been genetically
engineered and apparently while they were busy creating an army of
the most dangerous, deadly soldiers ever known, they hadn’t
considered that making them so aggressive might make them less
inclined to accept being ordered around.

So he couldn’t exactly claim that he
wasn’t used to feeling a good deal of resentment about being
commanded to do things.

And still, this was … more, a more
potent sense of aggression than he could recall feeling before
except in the heat of battle and a nearly overwhelming desire to
challenge her right to command him.

The Blood of Lorraine by Barbara Pope
Magic Dreams by Ilona Andrews
See No Evil by Gayle Roper
Buffalo West Wing by Hyzy, Julie
The Heart-Shaped Emblor (The Ewlishash Series) by Ewing, Alaina
Finding Myself in Fashion by Jeanne Beker
The Wanderer by Robyn Carr
The Laird and the Wanton Widow by Ann Lethbridge
Kissed Blind (A Hot Pursuit Novel Book 2) by Emerson Shaw
Love Comes Home by Terri Reed