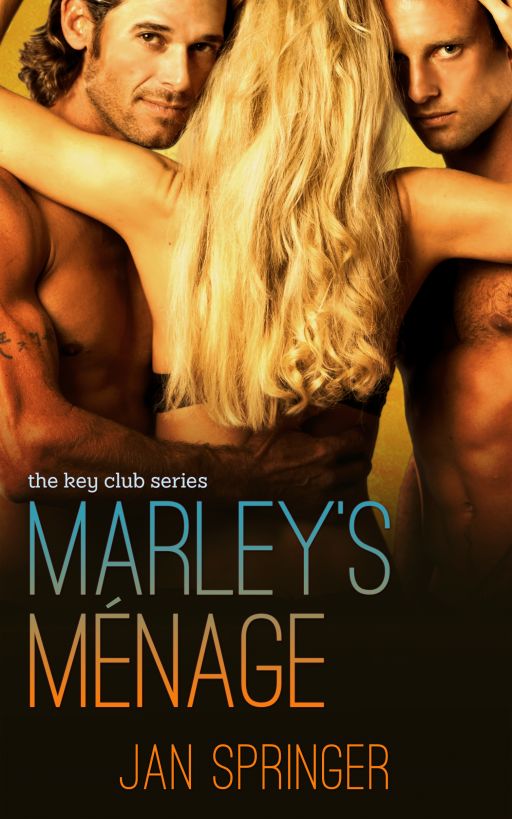 Discover other titles by Jan
Springer at
http://www.janspringer.com

This ebook is licensed for your
personal use only.

The ebook may not be re-sold or given
away to other people.

If you would like to share your ebook
with another person, please purchase an additional copy for each
recipient. Thank you for respecting the hard work of this
author.

This is a work of fiction. Characters,
places, settings and events presented in this book are purely of
the author’s imagination and bear no resemblance to any actual
person, living or dead or to any actual events, places and/or
settings.

Single soon-to-be mom Marley Madison
has had some wicked cravings in her day, but being pregnant has
made her cravings downright…naughty. She wants a ménage and she
needs it bad. When she gets word her local swinger’s club is having
a ménage night specifically for pregnant women, count her
in!

Marley’s ex-flames Rick Antonia and
Kacey Poole have just gotten back to town after serving in the
Special Ops for many years. When the two men spot Marley at the Key
Club, they can’t believe how much she’s changed. Her sweetly
rounded belly arouses them to no end and her curvy breasts intrigue
them. They want her back in their bed and they’re going to make
sure her dream of a scorching ménage comes true!

Suddenly Marley is pleasure bound and
shocked that her two ex-lovers are as passionate as ever. She’s
never been so aroused by their caring touches and tender kisses…but
Marley was in love with them years ago and she’s vowed not to let
that complication happen again…

“
A surge in craving sex
while you’re pregnant is perfectly normal,” her older sister, Dr.
Kelsie Madison explained as Marley, naked as the day she was born,
slid off the examination table and tucked her paper gown into the
nearby receptacle.

Relief splashed over her at
her sister’s answer. She’d been nervous about mentioning the
increase in her sex drive, but she needn’t have been. Kelsie was so
serious and professional and she hadn’t laughed at any of Marley’s
concerns about sex with a guy or guys and the possibility of it
hurting her unborn baby. Oh man, she was so glad her sister was a
gynecologist and obstetrician and that Marley could tell her
everything
, including the
naughty cravings she’d been experiencing lately.

“
You are into your second
trimester and everything appears to be in order. I’m going to write
you a prescription for more prenatal supplements,” Kelsie said as
she sat down at her desk, put on her black rimmed glasses and began
to write on a pad.

“
All women are different but
there are a large number who say their sex drive swells during
their pregnancy,” her sister said. “It has to do with the increase
of blood flow to the vulva area as your body prepares for
childbirth. Everything becomes more…sensitive. Your breasts and
nipples get larger and more sensitive as well. Vaginal lubrication
increases and orgasms can become quite a bit more
intense.”

“
Some women find it more
painful when their intimate areas are stimulated and they don’t
want sex or to be touched,” Kelsie continued. “Others, like you,
find their senses more intense and sex exciting. So, in answer to
your earlier question about if sex is safe for the baby? From what
I’ve seen during the examination, they baby is well protected in
your uterus, she’s healthy and you are in great health. In
addition, since you’re craving sex, I’ll prescribe sex and lots of
it. Just make sure there’s not too much pressure placed on the
belly area. Practice the safest sex ever. I don’t want you to get
any sexually transmitted diseases as they can be transmitted to the
baby as well as yourself. Until your next examination, you do what
you need to do to follow your cravings.”

Marley stepped into her sandals,
grabbed her purse and came to stand in front of her sister’s desk.
She admired the way Kelsie could talk so easily about sex. Yet her
older sister was still unmarried at thirty-nine. Not that there was
anything wrong with that. She was a very busy woman with an
extremely successful practice. She was also a workaholic. But any
guy would love her compassionate nature, her pretty honey-blonde
hair and her cheerful blue eyes. Even her black rimmed glasses
perched on her perfectly shaped nose made her look
sultry.

“
Thanks, sis. I really
appreciate your pep talk and for the examination,” Marley
said.

Kelsey pushed her glasses higher on her
nose, looked up at Marley and smiled warmly. The sight of her
sister’s eyes twinkling and that sweet, motherly smile made her
feel as if she was being embraced.

“
And concerning your other
question about craving a ménage. As I mentioned, everything looks
in order. Therefore, I have no concerns. Just make sure the sex
isn’t overly rough.”

Her sister ripped off the prescription
form from her pad, stood, strolled around her desk to Marley and
handed her the paper.

“
Prenatal vitamins and lots
of them,” she said. There was a mysterious smile to her lips as she
continued.

“
I’m proud of you, little
sis. You wanted a baby without a man and you went for it. You want
a ménage while pregnant, I am giving you the go ahead. I heard the
Key Club is having a Baby Bump Ménage evening for pregnant women
and for the men who have a pregnancy fetish. Since Jaxie has
trained all and any male participants fascinated in having sex with
a pregnant woman, you might be interested in putting your name in.
Sex with complete strangers might scratch the itch, so to speak. Do
you still have a membership with the Club?”

Marley nodded and laughed. “Who doesn’t
in this town? But yeah, sure, I’ll think about it,”

“
Don’t think too long. It’s
tomorrow night and it only comes around every few months. It would
be the safest route because we all know how Jaxie loves to screen
her members for sexually transmitted diseases, crazies and such and
it’s no strings, just the way you like it. If you decide to go for
it, tell Jaxie to call me and I’ll give her the go ahead to allow
you to participate.”

No strings. Yes, she’d like that.
Marley hadn’t had any problems with the guys she’d had casual sex
with at the Key Club on other occasions. She just hadn’t had a
ménage in awhile. Actually not since…a feather blade of pain lashed
through her as memories of two of the sexiest men she’d ever known
came to mind. She clamped down on the unwanted memories from her
past. She didn’t want to go there. It would just ruin her mood. But
she sure did have a need to feel a couple of men’s tender hands
caressing her newly formed curves.

“
Good stuff. Okay, so I’ve
got more patients to attend to,” her sister said, breaking into her
thoughts. She gave Marley a warm hug and patted her protruding
belly.

“
I guess that’s my clue to
get lost, huh?” Marley teased.

Kelsie’s look went serious. “If you
need to talk, or anything, I’m just a call away, okay?”

Marley nodded. A bubble of unexpected
emotion whipped through her and she struggled to hide it.
Thankfully, she managed to quite well. This time.

“
Thanks so much, sis. You
don’t know how much of a relief this has been to talk and to know
the baby is doing great.”

“
You’d be surprised how many
pregnant women find it embarrassing to talk about sex and don’t say
a thing to their doctor. I’m glad you can take control of your
concerns and bring them here. I’m so proud of you.”

Her sister’s phone rang and she
shrugged. “Work calls. Talk to you later?”

“
As soon as things settle
down here, we’ll have a girl’s weekend somewhere.”

Marley nodded and her sister sat back
down behind her desk to take her call. Unfortunately, Marley knew a
get together would probably not come for a while. Kelsie just
didn’t know when to quit working.

She’d been like that ever since their
mother had died of cancer when Kelsie had been sixteen and Marley
had been ten. With their dad being in the military and dragging
them around the world to where he was stationed at the time, Kelsie
and Marley had been left alone quite often on a military base to
take care of each other. Her sister had adopted the mother and
father roles to Marley and when Marley turned eighteen, they both
left their workaholic dad overseas and moved to this small Alberta
town.

Pushing aside the sadness that
enveloped her whenever she thought about their lonely past, Marley
quickly slipped out of the examination room. Her baby was going to
have a better childhood in this town where she would have her aunt
Kelsie and tons of her friends who were so looking forward to
meeting Marley’s baby. Her friends had already volunteered to
babysit.

In the adjoining waiting room, she made
a follow up appointment with the receptionist, and left. First
thing on her agenda was to grab a bite to eat and then she’d pop
over to the Key Club and ask Jaxie a little bit more about her
ménage night for pregnant ladies.

“
Hey, girlfriend. Long time
no see,” Jaxie called out to Marley as she entered the dimly lit
interior of The Key Club. She’d had a solo lunch of salad, a
grilled cheese sandwich laced with tons of pickles at the local
restaurant, and after thinking it over she decided to get more
information about the ménage night her sister had
mentioned.

Even during down time, the Key Club
looked gorgeous. Glitter gold tinsel hung from the overhead lamp
fixtures and gold-colored linen cloths were on the tables all ready
for Jaxie’ Gold themed evening tonight. The tablecloths were clean
and pressed and each table had fresh daisies tucked in small gold
vases. Jaxie was proud of her club and she lived and breathed in
this place. Rumor had it she was a discreet matchmaker too. Well,
Jaxie could keep her matchmaking skills to herself because Marley
wanted nothing to do with relationships. They were too darned
complicated.

“
Hey, Jax!” Marley called
back and waved to the red-haired woman.

She skirted around the arrangement of
tables, careful not to bump her big belly against the chairs. She
made her way to the back of the room where Jaxie stood behind a bar
counter drying a tall gold-rimmed beer glass.

As Marley drew closer, Jaxie’s gaze
lowered to Marley’s belly. Her eyes widened with surprise and she
gave a low whistle.

“
I can see you’ve been busy.
No wonder you haven’t been here in awhile.”

Marley swept her hand protectively over
her baby bulge.

“
Jaxie, meet Angela Marie.
She’s due in about four and a half months.”

“
Don’t tell me. You finally
re-hooked with Rick and Kacey and one of them got you
pregnant.”

At the mention of her old boyfriends,
Marley tensed. As far as she knew, her ex-lovers were still off
enjoying their adventures overseas in the Canadian Special Ops. So
Jaxie was just teasing in a bad taste way.