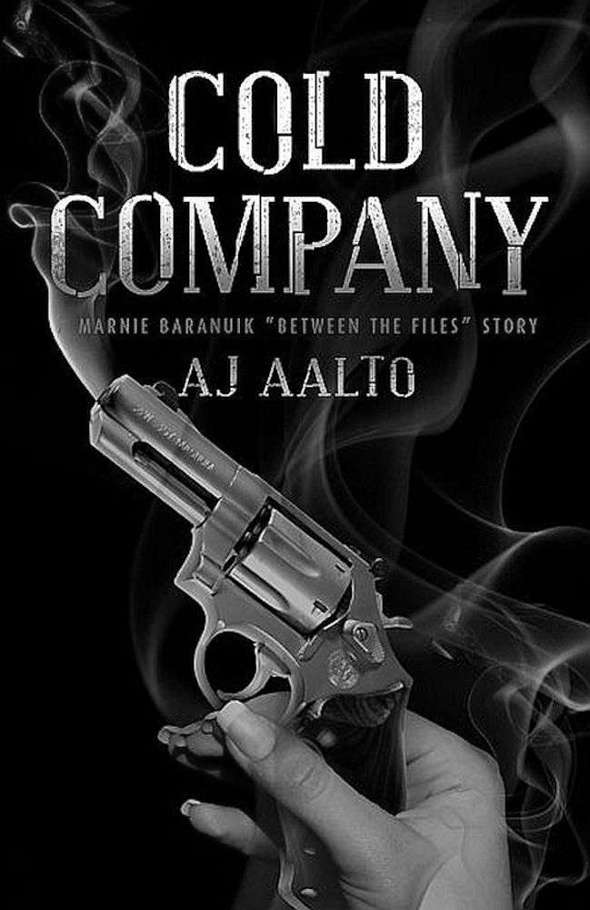 A Marnie Baranuik “Between the Files” Story

This work is licensed under a Creative Commons Attribution-Noncommercial-No Derivative Works 3.0 Unported License.

Attribution — You must attribute the work in the manner specified by the author or licensor (but not in any way that suggests that they endorse you or your use of the work).

Noncommercial — You may not use this work for commercial purposes.

No Derivative Works — You may not alter, transform, or build upon this work.

Inquiries about additional permissions should be directed to: [email protected]

This is a work of fiction. Names, characters, places, brands, media, and incidents are either the product of the author's imagination or are used fictitiously.  Any resemblance to similarly named places or to persons living or deceased is unintentional.

DISCOUNTS OR CUSTOMIZED EDITIONS MAY BE AVAILABLE FOR EDUCATIONAL AND OTHER GROUPS BASED ON BULK PURCHASE.

For my regular readers, this “Between the Files” story takes place between the events of
Death Rejoices
and
Last Impressions
.

I hope that new readers will enjoy it as a standalone tale and introduction to the world the Marnie Baranuik Files inhabit.

To the residents of St. Catharines, especially those North-Enders of an age to remember the sand piles by the woods at Port Weller (WOOTIE- WOOT Grantham Gators!), I offer my affectionate dedication of this tale.

There are only two things that can make me grumpier than active crime scenes when I haven't had enough coffee: overtly-distrustful police officers and early spring in Niagara. The cop thing is annoying and vaguely condescending to people in my line of work. As for the regional weather, I grew up there, and the weeks of melting snow and grey skies are my least-favorite weeks of the year. Frigid water courses along streets into culverts, manholes, and ditches. Slush piles up around the parking lots, revealing months of accumulated crud as it melts. Damp wind sneaks through every layer to chill your bones. The sun, if it peeks out at all, is a shy, weak ally. At least the coffee thing could be fixed to my liking, because you can't swing a hockey stick without hitting a Tim Horton's.

My name’s Marnie Baranuik: forensic psychic, amateur detective, and professional dunce. I used to work for Gold-Drake & Cross, a company that manages psychics throughout North America. Now, I run the UnNatural Biology Department at the FBI’s Boulder, Colorado branch of the Preternatural Crimes Unit. I’m supposed to stay in the lab, focusing on paranormal science, not using my psychic Talents for field work. Obeying orders is also kind of high my Do Not Want list.

Unfortunately, I wasn't in my cozy basement lab, surrounded by scribble-filled Moleskine notebooks and flesh-eating zombie beetles; I was enduring exactly the kind of imperfect trifecta of an evening that made me glum: an active crime scene, two constables giving me some suspicious, side-eyed static, and a drippy April evening in St. Catharines, Ontario. Home, sweet home. Probably, sweet was an overstatement. Okay, maybe more like a lie. I had clouds of familial doom that hung over the region as if they were mist thrown up by Niagara Falls, only not nearly as picturesque, or as enticing for daredevils to brave with barrels and tightropes. I amused myself with visions of my immediate family tied up and stuffed into barrels, but quashed that before the cops started getting curious. Wondering where the hell the revenants who'd gone on a coffee run were helped mask my uncharitable thoughts with some justified annoyance.

The frizzy-haired, tweed-clad landlord of Shag Towers did not comment on the disappearance of his tenant, nor did he attempt to explain the head-scratching name of the edifice. The building was a squat Mod six-plex near Brock University, dun brown and dingy on the outside, worse on the inside. The reason for the moniker became apparent as soon as we walked in. The front foyer was narrow, poorly-lit, and thick with orange shag carpeting that looked original and had soaked up the smell of onions, bacon, wet dog, and insecticide. Worn threadbare in the middle and drooping listlessly at the edges, the same carpet covered the risers up the stairwell, where it picked up the scent of cigarette smoke. By the third floor, it had taken on a pungent pot aroma. Neither of the cops with me reacted to this with any interest; we were here on more important matters.

At apartment six, Constable Grace Percy tucked a black binder under her arm and broke the police tape on the door, while Constable Fred Fryfogle crossed a pair of mega-jumbo arms over his supertanker-sized chest and did a fairly good impression of the Matterhorn.

“Did you get my fax?” Percy asked me.

Constable Big Arms clamped thin lips tightly so as not to grin at his partner’s expense, which was fine by me; I grinned enough for both of us.

“We think it was abduction by a vampire,” Percy said, unlocking the door and letting it open slowly under its own weight, the security chain swinging listlessly.

“You go right for the supernatural?” I said, cringing at Percy’s un-PC use of the V-word. “Why not a nice, wholesome abduction? Any local psychopaths? What’s wrong with a good ol’ home-grown psychopath?”

It was Percy’s turn to cringe. “Rachel Houseton was a known bleeder with a penchant for volunteering her neck to immortals,” she said, “with noticeable fang marks on her throat. I figure one of them came back for seconds.”

She slid a copy of the picture the investigative team had been using to canvass the neighborhood out of her binder and handed it to me. Rachel was a slight woman, mid-thirties, light complexion, blonde hair dyed chestnut. Her sandy eyebrows gave her away.

“I thought cops operated on fact, not guesswork,” I accused. “Those aren’t fang marks on her throat, they’re tattoos. It’s an adolescent fashion statement, probably one she regrets now that she’s in her thirties.”

Fryfogle whipped the picture from my hands and held it up to his face, squinting at it under bad hallway lighting. “How can you be sure?”

“I’m a professional forensic psychic with a doctorate in preternatural biology. Also, I see the real thing in the mirror every fuckin' day.” I displayed the marks on the side of my throat for them in the hallway's dim light: tiny, pale, barely visible, they looked nothing like the blood-rimmed black circles in Rachel’s picture. “See the difference?”

While Fryfogle did a genuinely interested comparison, Percy sighed, a long, impatient noise, and reclaimed the photo. “She’s been seen in local bars at night with a vampire.”

“What kind of bar?” I asked. “Booze, coffee, salad? Did they drink? Did they dance? Was it disco?”

“Vampires loooooove disco,” Fryfogle commented wryly under his breath, just loud enough for me to hear. I’d have argued, but the immortal I lived with often cranked “Stayin’ Alive” and did a bump and grind routine in front of the kitchen sink. They didn't need to know that, or the fact that sometimes he did it in nothing but a cheery red apron and glossy jackboots.

“The preferred term is revenant,” I corrected. “They don’t like the V-word. And the fact that Rachel was seen with one doesn’t mean squat. Maybe she was tutoring him. You said she taught English as a second language, correct?”

“Last I checked, there were only twelve revenants living in Ontario, and only four in the Niagara region. They’re all legal residents. You’d know that if you’d asked Gold-Drake & Cross for the Ontario roster. All twelve are Bonded to DaySitters like me, guardian-psychics who protect them during the daylight hours. Two of the revenants in Niagara don't speak English, or didn’t when they immigrated to Canada. Neither did their human companions. Hey, look at me, doing basic police work.”

I smiled brightly up at them, frankly proud of myself for not sounding more condescending. I had been working on my people skills. Kind of. Fryfogle checked the level of annoyance on his partner’s face before choosing not to return my smile. Okay, his people skills were better than mine.

“What I'm saying is, not a single revenant in Southern Ontario needs an outside source of nourishment,” I said. “They might accept it, but they don’t require it. All of their DaySitters work at the Hamilton branch of GD&C as forensic psychics.”

Percy snapped her binder shut and turned on me. “There are other aspects of the bleeder lifestyle, Miss Baranuik—”

“With which you are clearly not acquainted. Maybe your education didn’t—”

“Careful, you’re about to assume again,” I interrupted, pausing at the threshold to peek inside, adjusting my leather gloves to make sure they were snug and secure on my hands. “I spent three years at McGill in Montreal and four years at Johns Hopkins before studying at Cambridge, and then wrapped up my graduate work doing research with Petr Nemecek, who's pretty much the leading authority in undead studies. Maybe you’ve heard of him?”

“I have,” Percy said, and surprised me. “He left his wife of fifteen years to pursue a brief, tumultuous relationship with you in Vienna.”

“That’s a lie.” It was hardly tumultuous. “You sound like the gossip column in the back of Fast Science Quarterly.”

“Fast Science,” she repeated, “is where I saw the pictures of the two of you cavorting on the nude beach.”

More bullshit. I'm not graceful enough to cavort. I can't even canoodle without training wheels. “So you investigate me, but not your vic?” I said. “That’s fucking interesting. Thought we were on the same side.”

Walking in Darkness by Charlotte Lamb
Nightshade City by Hilary Wagner
Separate Kingdoms (P.S.) by Laken, Valerie
Never Let Them See You Cry by Edna Buchanan
Cold Hands by John Niven
The Inside of Out by Jenn Marie Thorne
No Regrets (Live Today #2) by Savana Jade
Mistletoe & Molly by Jennifer Snow
Seducing the Merman (Fairies and Fantasies #1) by Eliza Daniels
DoubleTeamHer by Titania Ladley