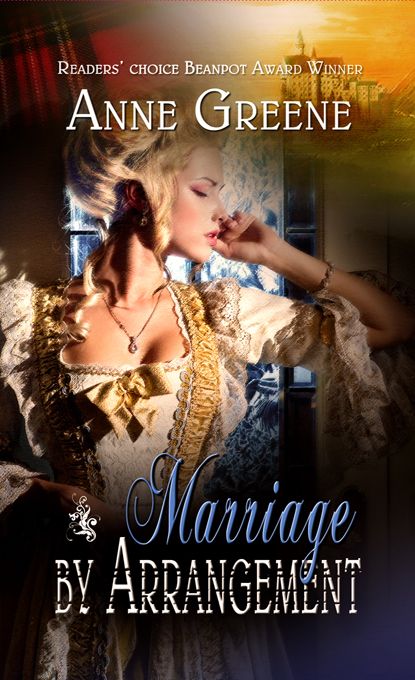 I dedicate
Marriage by Arrangement
to my precious Savior, Jesus Christ, and to my loving family.

Filled with rich Scottish language and descriptive passages, this book literally tosses you back in time to a land where men fought to be free from the tyranny of the English…I literally sat and read all day, pausing only to feed the kids, so compelling is the story. I laughed and even cried. The emotions run deep as Megan and Brody slowly see past the pretense of their marriage and fall for each other, only for fate to step in.

Definitely one to read, this will have you riveted to your comp/e-reader/book and one you’ll want to read again. ~ Clare, Happily Ever After Reviews

DUKE. After the royal family, the duke ranks highest. The duke is always addressed as
Your Grace
, though familiars may address him as Duke. He will never be addressed by his family name.

BARON. The lowest inherited titled rank is baron. His wife is a baroness. Simply addressed as Lord and Lady.

DOWAGER. When a titled lady is widowed she becomes a dowager.

Castle Drummond, home of Lord and Lady MacMurry, near the Village of Kirkmichael in Lowland Scotland—April 19, 1746.

“I won’t run.” A shudder skipped down Lady Cailin MacMurry’s spine, and she stared at her younger sister. “I’m committed.”

“No, it’s not too late for you to flee. You must, because I heard another scandalous rumor about Duke Avondale.” Lady Megan MacMurry grasped Cailin’s arm.

“I won’t listen to gossip.” Cailin pulled away from her sister and lifted her wedding bouquet to inhale the white rose fragrance. If only the sweet scent could overcome Megan’s words, and her own misgivings. Though many arranged marriages turned out badly, surely God would give her a loving one.
After all, since her earliest years, she’d prayed for a happily-ever-after love.

“Ask yourself why such a grand noble would stoop to marry a Scottish lass whose Papa is but a Baron? Why did he not choose the daughter of an English duke or a marquess or even an earl and receive ever so much more dowry and prestige?” Megan tilted her head and lifted elegant brows.

“The man’s an English duke. He owns palaces all over England.” Megan planted her hands on her slender, mossy-green silk covered hips. “Every noble lass in the land should be offering to give her right arm to be in your shoes. And yet they are not.”

New knots formed in the nape of Cailin’s neck. She held her finger to her lips. “Too late to turn back now. The wedding chorus has begun.” She forced her feet to take the first step, and then began the slow glide from the stone castle’s rear archway through the garden towards the rose arbor.

With a jerk, Megan lifted and straightened Cailin’s cumbersome satin train. “In truth, beyond his wealth and titles, our family knows little about the English duke.” She gathered up her own long skirts, and ran ahead to lead Cailin down the flower-strewn path.

Seven bridesmaids stopped giggling and chatting and moved to their places in front of Megan to head the procession.

Beneath her veil, Cailin smoothed her frown.

Papa had chosen to take this path in light of the violent upheaval following England’s latest battle with the Highlanders.

Her marriage to the duke would shelter her family with his great cloak of protection. Neither the English nor the Scots would dare invade a castle guarded by the powerful duke’s coat of arms.

More goose bumps shivered down her spine. Surely, jealousy fueled the flagrant tittle-tattle. She pulled in a deep breath, straightened her shoulders, and took measured steps in time to the music towards the loch gleaming in the late afternoon sunlight. She would not let whispers spoil her wedding. She laid her hand lightly on her father’s offered arm.

Their procession passed the scores of guests assembled on both sides of the flowered path. Ahead, her groom stood beneath the rose bower, sunlight from the loch gleaming on him, the pastor, and his groomsman.

The duke looked the perfect picture of manhood. He towered above his shorter groomsman and the pastor. Sun glinting off his iceberg blue satin coat, heavily laced with gold, almost blinded her. His chocolate eyes gazed past the dazzling crowd of guests and focused on her. Beneath those beckoning eyes, the straight bridge of his nose above softly smiling lips formed the most handsome face she’d ever seen.

Her pulse quickened. Butterflies flitted from her stomach to her heart and back. As she reached her groom and the chamber music died, her high-heeled slippers sank into the grassy moor, but her foreboding dissolved like fog before the sunshine.

The rose bower in the garden where she and the duke stood together and promised their fidelity was pure romance with its lush greenery, heavy scent of roses, and panorama of softly rolling, newly green glen. Though she didn’t know the man she wed, she repeated with all her heart to love, honor, and obey him as long as she should live.

Marrying a man one had barely met happened more often than not to daughters of lords. So why were her knees shaking? Her attractive groom, with his mahogany hair, wide shoulders, and square jaw, held her hand gently in his warm, strong grasp. Rumors were just rumors, and, truth be told, if he was not perfect, neither was she.

A breeze loosened strands of brown hair from the gold band that tied the thick mass behind his muscular neck to dance around his face.

She was glad he had not powdered his hair. Her throat tightened. Loving him would be easy.

She would love him so greatly, with everything inside her heart. Surely, he would love her in return. She would work hard to make certain her marriage turned out differently from her mother’s. There would be no coldness, nor violent arguments between her and her grand duke. No sleeping in separate parts of the castle. No making their daughters’ lives miserable with the dislike they bore one another.

As the magnificent sunset painted him gold, the duke’s chestnut eyes stared into hers with promise, his inviting lips tipped upwards at the corners, and his demeanor was affectionate and approving.

Joy burst through her chest, and she gave him a brilliant smile. Yes, her marriage would be happy. A storybook marriage, like Cinderella’s.

The English parson the duke had brought with him raised a hand in blessing. “I now pronounce you man and wife. You may kiss the bride.”

She handed her heavy bouquet of roses and lilies to Megan and tipped her chin up.

The tall, lithe, young duke stepped forward and lifted her expensive Brussels veil. She was so very fortunate he was not old.

She closed her eyes.

He touched his lips to hers.

Oh
! Her eyes flew open. The bridal kiss had been so short…and disappointing. The pledge in his gaze had led her to expect so much more. She frowned. Their first kiss was like melding lips with someone on stage, acting a part.

He dropped his arms and moved back.

Megan handed her the wedding bouquet.

Guests surged forward, surrounded them, and poured out congratulations.

She swallowed. So, in obedience to Papa, she had made vows to a complete stranger…vows that could not be broken.

Though the cold kiss dropped a mantle of heaviness over her heart, she shook off the shroud, smiled, and lifted her chin. She’d done her duty. Now the family was safe.

Nearby musicians, seated next to the newly constructed dance floor, struck up the music for the traditional four-reel.

The duke took her hand, his groomsman took Megan’s, and the four of them stepped onto the dance platform.

She draped her silky train over one arm and lifted her heavy skirts. As her new husband led her through the lively dance, his hand felt strong holding hers, and firm and sheltering on the small of her back. She smiled into his dusky eyes.

He smelled of manhood, expensive scent, and new clothes.

Her heart flip-flopped. Perhaps he’d been nervous and the impersonal kiss had no meaning. Heat warmed her cheeks. Tonight he would kiss her in a quite different manner.

Too soon, the dance ended.

Other guests stepped onto the wooden platform. The musicians slowed the tempo and glided into a Mozart minuet. The wooden floor filled, vibrating under the thud of many feet, and couples overflowed to the grassy glen.

Her husband bowed and left to claim Mums for the Parents’ Dance.

Carried along by well-wishers, she lifted her skirts and stepped down onto the grass.

Megan slipped to her side. “Now, while all the guests are busy, I won’t be missed. I must make my bid for freedom and escape.” Her sister’s whisper tickled Cailin’s ear.

“I have a few minutes while no one is expecting anything of me.” Cailin edged away from the swirling dancers. “The guests will think I left to attend to my personal matters. I’ll see you off.” She lifted her skirts and glided through the garden after her sister. They hastened around the garden maze, through the purpling heather thinly spread over the spongy peat moss, past the herb garden, and sprinted straight for the carriage house.

Dirty Wicked Lust: A Stepbrother Romance by Amanda Heartley
Journey Across the Four Seas by Veronica Li
Jump by Tim Maleeny
The Chaos by Rachel Ward
I'll Never Let You Go (Morgans of Nashville) by Mary Burton
The March North by Graydon Saunders
Regarding the Pain of Others by Susan Sontag
Chaos Unleashed by Drew Karpyshyn
Break On Through by Ridgway, Christie
Squishy Taylor and the Mess-Makers by Ailsa Wild