Read Martine The Beginning (Cruising to Love, The Prequel) Online

Martine The Beginning (Cruising to Love, The Prequel) 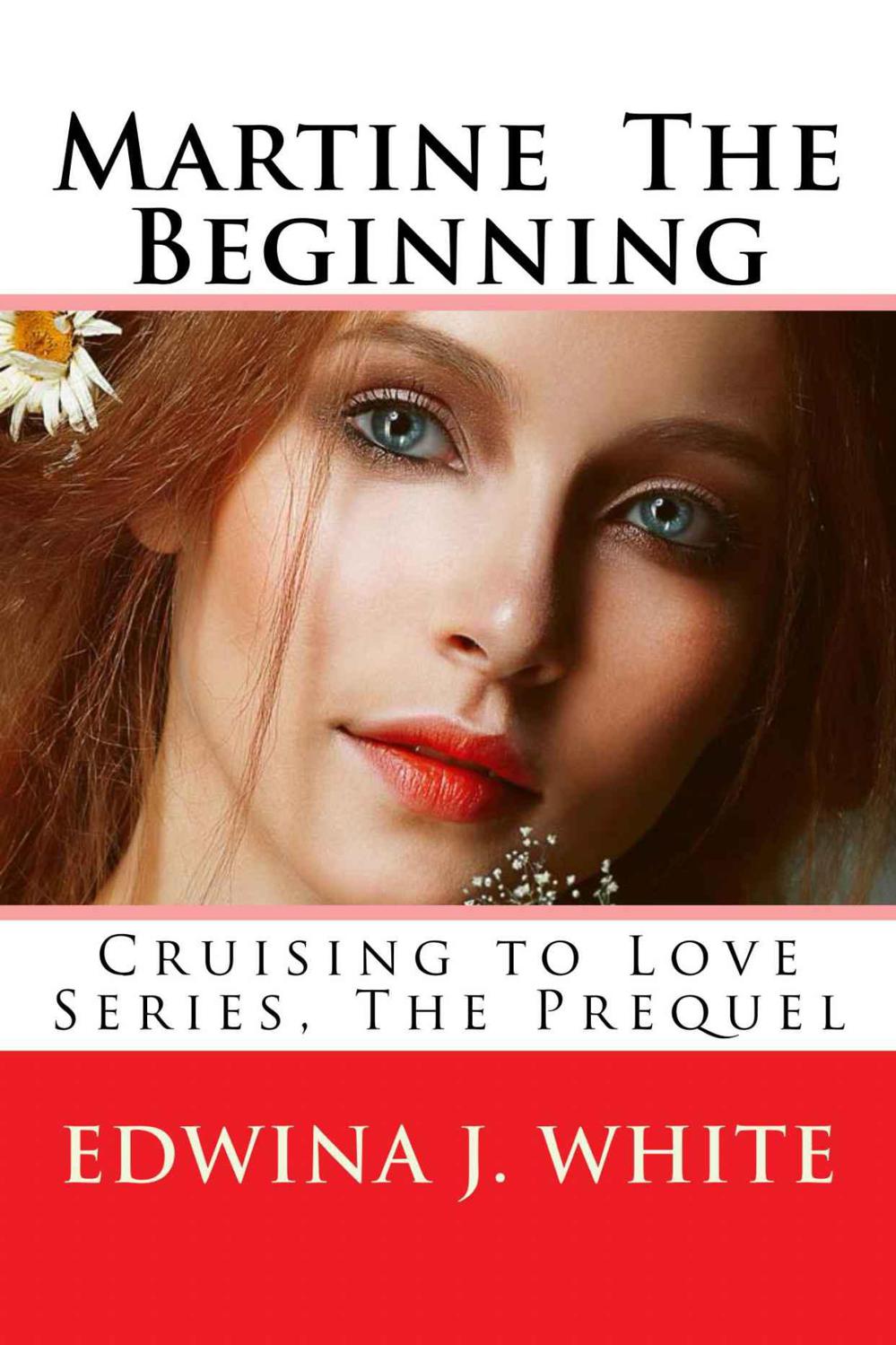 ABOUT THE CRUISING TO LOVE  SERIES

The
Cruising to Love
Series (so far, seven books) follows a group of people as they find love. They don’t all find it on a cruise ship, but except for the Prequel, at least part of every story is set on the mythical Dream Cruise Lines. They are stand-alone, but in chronological order, here they are…enjoy!

Book One:
Martine, The Beginning
is the prequel to the series, and introduces many of the characters you will find in the other books. It is a story of young love, of awakening. Martine is young to own a business, and she is focused on making her Art Gallery a Success. Lucas Langdon walks through the door, buys a painting, and sweeps her off to dinner. Can the unspoiled young woman and the sophisticated businessman find true love? You’ll have to read it to find out.

Book Two:
Penny’s Dreams
is the story of Penny, Martine’s best friend and her romance with Bertie, the man she fell in love with across a crowded room. They danced and danced, but he never asked for her number. So did the fact that he turned up on her Caribbean cruise hold the significance she hoped it did?

Book Three:
Francesca’s Voyage
is about Bertie’s sister, Francesca. Francesca had given her heart to a man, but he’d jilted her almost at the altar and married another woman. She’d never fallen in love again. Now, twenty years later, she was cruising the Pacific Ocean, and the man who shattered her dreams and her heart was the Captain of the Ship.  Can Francesca forgive Nigel and heal her aching heart? Or with the young Cruise Director win her attention?

Book Four:
Elizabetta’s Journey
Francesca gives her sister Elizabetta a cruise for her birthday. Elizabetta has found success as an artist, but has lost twice at love, one marriage ending in divorce and the second left her a widow.  When she meets Charlie, a precocious six year old and his father, the Ship’s Doctor, her cruise to the Canary Islands becomes much more enjoyable. But blackmail lurks to darken her future.

Book Five:
Martine’s Adventure
After ten years of marriage, Martine and Lucas have been separated for three. Penny and her husband’s sisters send her off to a cruise from Tahiti to New Zealand. Martine looks forward to a break from her thriving Art Gallery and her twin boys.  Ken, the Cruise Director, tells her he is going to make her trip memorable, and get to know her very, very well, but Martine is also pursued by The Phantom of The Opera. Who is that man? He appeared at the Masquerade Party, and then at her cabin. His kisses seem so hauntingly familiar, or does she just want them to be so hauntingly familiar? Is she fooling herself when she hopes it might be Lucas, wooing her back?

Book Six:
Lucy’s Love
Lucy and Dan had met in Martine’s Gallery when he was twenty one and she was thirty one. He was a struggling art student, she was a very wealthy woman who’d just established a successful business. She couldn’t cope with the age difference, and after three years, sent him away. Now, eight years later, he returned to her life, and the spark was still there, in fact it was a roaring blaze. Dan was determined to marry Lucy, but Belinda, a sexy artist who specialized in male nudes, was equally determined to have Dan for herself. With a little help from his friends Lucas and Bertie, Dan plots to slip the ring on Lucy’s finger on a Greek Island Cruise.

Book Seven:
Geoffrey’s Girl
Janie has a past that she would like to keep hidden. She’d been married to an action hero who had been tragically killed by a hit and run driver. She’d starred in his films herself.  All she wanted now was a quiet life. Lucy, her best friend, urged her to go back to London, go back to work as an editor, her trade before she’d met Stephen. She listened, and got a job at Geoffrey’s magazine, and respect grew between the billionaire and the calm woman who worked for him. On a whim, he invited her to his country getaway with his bulldog Winston, and their friendship blossomed into much more.  He took her on a cruise around Australia. Only problems was, Donald, who fancied Janie, and Rachel, who lusted after Geoffrey managed to find out and get themselves onto the Ship as

CRUSING TO LOVE BOOK ONE

The red head in the window
,
setting up the display, caught Lucas’s eye.  Very pretty red head, she was, he thought. Cute figure, too.

“
About seventeen or eighteen,” he thought.       “Too bad she’s so young, I don’t make a habit of robbing the cradle.  Now if she was nineteen or twenty…”

He smiled to himself and walked on to buy himself some milk for his tea in the morning.

She was still in the window when he walked home.  Hanging another painting.  And this time, the painting caught his eye. It was a landscape, a watercolour.  Looked just like the view from his uncle’s window across the Highlands.

The
Open
sign was still showing, although it was half past seven on a Wednesday night in November.  On impulse, he opened the door of the Art Gallery and went in.

“Excuse me,” he said, “That painting you have just so carefully positioned in the window, the Scottish landscape -- how much is it?”

The girl stepped carefully off the ledge and down onto the floor.  She was almost a foot shorter than Lucas’s 6’2” lean frame.

“It’s a hundred pounds,” she smiled at him.  A dazzling smile that reached her green eyes.

Lucas noticed that her lips were full, and very inviting. He revised his thoughts from ’very pretty’, to ’almost beautiful’.  She was one of those girls who would improve with age, he thought to himself.  Aloud, he said to her,

“A hundred?  That’s about the most my budget will stretch to.  I’ll take it. It will definitely add some class to my office wall.”

“I’
ll just get it down for you, shall I, so that you can see it more clearly?”  She stepped back into the window, and Lucas again appreciated the view of her shapely derriere.

He reached out and took hold of her elbow, to help her step back out of the window. Since she had her hands full with the painting, of course.  There was definitely something nice about holding her elbow.

The girl set the painting on an empty easel sitting by her counter, and together she and Lucas stood and admired the watercolour.

“Who’s the artist?” asked Lucas.  “I have to admit, I know nothing about art, just what I like.”

“She’s a student at the Art School,” answered the red head.  “Her name is Belinda Boyle.  I’ve just started to take her work this month.  I think she is going to have quite a career.  This is the third painting she’s given me to sell, and the first two went in about three days.  I just got this today.”

Lucas looked at her.
“You must be older than you look,” he smiled down at her.  Things were suddenly looking up. “I thought you were about seventeen.”

The red head grinned.
“No.  I’m nineteen.  Twenty in March.”

“Are you the manager?”

“As bad as me, I have my own management consultant firm.  So I know exactly what you’re talking about.  I’m Lucas.”  He extended his hand.

“Martha…I mean, Martine.  My friend Penny said I should change my name to Martine.  It sounds better for an art gallery, she thinks.”

Martine giggled delightedly.
“I’ll do that.  I’ve almost got enough in the kitty for a proper sign now.  Martine’s Art Gallery of Notting Hill has a much better sound than Notting Hill Art Gallery.

“Tina, on the other hand,” smiled Lucas, “sounds like a really attractive young woman, which you are.”

Martine blushed.
“Thank you.”  She obviously wasn’t used to receiving compliments from strangers.  “Handsome young men strangers,” she thought to herself.

“What time do you close, Tina?” asked Lucas.

“Eight o’clock, in about fifteen minutes,” she replied.  She turned to the counter and started to wrap the painting in brown paper, tied it up neatly with string, making it easy for Lucas to carry.  “I’m open one till eight every day except Sunday.  Sunday I sleep…”