Read Master of None Online 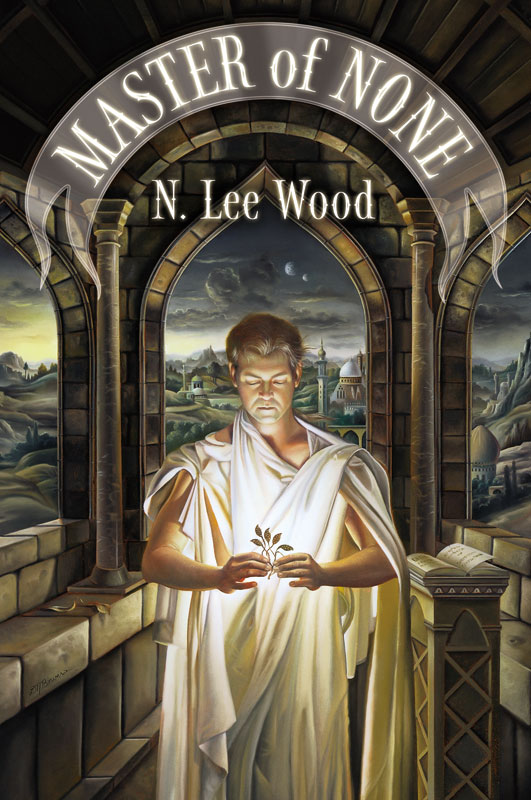 The Aspect name and logo are registered trademarks of Warner Books.

“My name is Nathan Crewe. I’m a Hengeli citizen. I request to see a lawyer.”

The corners of her lips curled up sardonically. “A lawyer?” Alarm prickled the hair on his neck. “Under the human rights directives of the Convention, I am entitled to legal counsel.”

Vasant Subah stared at him, and rubbed her forefinger across her chin as if to stifle a laugh. “
What
Convention? Vanar never signed any Convention. You are subject to Vanar laws now. You’re suspected of being a saboteur or a terrorist.”

“Terrorist!” he blurted in shock. “Don’t I even get a trial?” “You’ve already had your trial. You’ve been found guilty of illegal entry.”

For some reason that made her smile even wider . . .

“Combining the gender mind-bending of Ursula K. Le Guin, the exoticism of Robert E. Howard, and a feel for aliens reminiscent of C.J. Cherryh, MASTER OF NONE offers the reader both food for thought and dessert for delectation. I recommend it to all fans of plenary world-building and absorbing sf adventure.”

—James Morrow, author of
Only Begotten Daughter
and
Towing Jehovah

“Of all the great books I have read on the politics, nature, and meaning of gender, this is one of the very best.”

This one’s for Jon.

N
ATHAN FOLLOWED THE
SAHAKHARAE
FROM THE MEN’S GATE INTO THE
wide portico surrounding the star-shaped courtyard. Blue shadows cut the sunlight into brilliant shafts through a lace of stone, hurting his eyes. In the center of the garden, water cascaded over layers of rough, black rock into a pool. Koi flashed under the ripples, tiny shivers of striated jewels, ruby, pearl, and gold.

Two young men reclined on the grass, half hidden by the tall heads of flower blossoms nodding in the heat. Obviously infatuated with one another, their hands slipped inside undone clothing to expose smooth brown skin gleaming with sweat. They broke off their embrace and stared in silence as the sahakharae ushered Nathan along the path across the cloisterlike garden.

A dozen or so men occupied the interior courtyard. In the cool arcades around the garden edge, old men lounged against stone pillars in the shade, conversing in quiet voices. All but one were wrapped in milky blue
sati
to protect them from the sun, the gauzy edges of cloth pulled over heads to shade their wrinkled faces. Fans of colored paper warded off insects. The loner wore nothing at all, stretched naked on the lip of stone, his body sun baked to mahogany, his own sati folded neatly for use as a pillow.

As the old men caught sight of Nathan, they hushed, watching him in silence. He tried to keep his attention politely focused on the intricate braid swinging between the sahakharae’s shoulders, but couldn’t help glancing around the courtyard.

A group of boys sat on the fountain edge, the youngest no older than ten, a thick tumble of black hair screening his face. They laughed as they splashed each other with water, flicking wet fingers and dodging the drops. Alerted by the change in sound, they glanced around, smiles vanishing as they watched with wide, inquisitive eyes.

Nathan found it hard not to stare back. The naked man sat up, one hand shading his eyes as he squinted in the sunlight. The courtyard was so silent Nathan could hear the faint melody of birds overhead. He was acutely aware of his shabby appearance, the ragged edge of his linen sati, his own short braid and dusty bare feet.

The sahakharae extended one hand mutely to direct him to a passage leading into the dark interior. As Nathan passed the old men, he held his hands together in greeting, bowing his head in respect. The old men did not respond, but the naked man nodded a fraction in response. The youngest child by the fountain suddenly giggled, his high laugh cut short as his companions shushed him.

Nathan stumbled after the sahakharae up the curved stairway, his eyes not yet adjusted to the gloom. From outside, the Nga’esha House dominated the hill like a huge fortress, a city in miniature. The interior seemed even larger, a rambling web of arches and corridors connecting numerous wings. The sahakharae halted at a carved doorway of the main wing, pulling one side open and indicating to Nathan to go in with a graceful motion of his hand and a small bow.

Nathan stood alone as the door closed behind him. A thrill of panic shot through his gut before a door opposite opened to admit him. The woman regarding him was young, dark hair pulled back severely from around a narrow, heart-shaped face, brown eyes hard but, he hoped, not hostile. She wore loose
saekah
trousers, the bloodred sheer fabric gathered in cuffs at her ankles, the pleats of her watery blue tunic brushing just below her knees. Dozens of heavy gold bracelets stacked both arms, extending from wrist almost to elbow.

With the palms of his hands together, he pressed his crossed thumbs hard against his sternum, fingertips nearly touching his chin, exactly as he’d been taught. Keeping his spine straight, he let his head fall forward on his neck, eyes down, and stood rigidly in this awkward position.

He heard a faint staccato of breath, and realized she had laughed. When he looked up, she was smiling, her eyes crinkled in amusement. He knew he’d done something incorrect, but not what. To his relief, it didn’t seem to matter much as she nodded politely toward him, signaling an invitation to enter.

Inside, she gestured toward a small fountain flowing from the wall, the pipe designed to shape the continual stream of water into a coiling arc splashing into the wide shallow basin. He had learned enough to understand by now what was expected, stepping into the basin to hold his hands under the running water, scrub briefly at his face, and wash the unclean dust of the outside from his feet.

Once ritually cleansed to her satisfaction, he followed her down the hall, her sandals and his wet bare footsteps noiseless against the thick carpet. She led him through a wide stone entry into a huge, sunny room, sunlight pouring in from double rows of arched windows supported by deceptively frail columns. Brilliant white plastered walls reflected prismed rainbows from cut glass. The smell of hot earth and honeysuckle drifting through open windows mixed with the scent of burnt incense. Long streamers of silk hung from the ceiling arched high overhead, rippling in the slight breeze, tiny brass bells sewn to weight their ends. Dark and light grains of wood wove an intricate maze on the inlaid floor, spiraling toward the center of the spacious room, the burnished wood reflecting the raised platform like an island on the surface of a still lake.

Half a dozen other women were scattered around the edges of the room, on low settees or large floor cushions, some dressed in the traditional close-fitting silk
mati
underneath lengths of shimmering blue silk elaborately folded and wrapped around slender bodies. Gold jewelry sparkled on dark skin, long black hair laced with pearls and gems. The rest wore bright saekah trousers and
kirtiya
cinched at the waist with ornate belts. One of them idly fingered a carved staff lying beside her, eying him distrustfully.

An old woman reclined on the dais, dressed only in a loose
tasmai
, her frail body half buried in pillows. One arm stretched over an edge, the tip of a water pipe dangling from her fingers. She blew a stream of smoke from her thin lips, watching him with heavy-lidded reptilian eyes, the sclera as yellowed as her teeth. She reminded him of a hawk: contemptuous, powerful, the hint of steel hidden under velvet feathers.

The younger woman bowed loosely toward her, and seated herself with two other women at a discreet distance. He stood uncertainly, listening to the faint laughter of boys in the garden outside as she nodded. “Be welcome, Nathan Crewe,” she said in his native language, her husky voice gentle. The sound carried clearly across the vast room. “A pleasure to see you again.”

He had had to petition at the Nga’esha gates for several weeks before he was granted another audience, this time following the correct and complex formalities. Making a spectacle of himself a second time would not be tolerated. Despite her apparent congeniality, he knew his intrusion into the agenda of the Nga’esha
pratha h’máy
had better be of interest to her, rather than merely vital to him. He inhaled a deep breath, more for courage, and strode toward her, stopping exactly three steps away from the dais. Methodically, he swept the edge of his white sati to one side and knelt, knees together, buttocks resting on his heels, right foot crossed against the flat of the left. He put his palms against his thighs, fingers together, and inclined his torso in a slight bow, paying scrupulous attention to the details.

“I pray,
l’amae
, that I find you in good health,” he said in Vanar, carefully parroting phonetic sounds he had memorized, words he barely understood, “and wish you continued long life and good fortune.” His tongue strained against the complex diphthongs and glottal stops threatening to choke him, the endless nasalized umlauts his surly tutor had literally tried to pound into his skull.

Suppressed laughter whispered around the room. His cheeks burned with a sudden flush. “I said that wrong, didn’t I?” he asked the older woman, switching to his native Hengeli.

The old woman squinted in amusement as much as from the smoke curling in her eyes. “Not at all; entirely correct,” she assured him in the same language. Her lilting accent would have been sensual in a younger woman. “You are making excellent progress indeed.” He settled back on his heels, and stared at her as if for the first time. Compared to the other women in the room, her dress was somber, no jewelry but the bracelets on her forearms, the blue birdsilk tasmai robe pulled around her with the Nga’esha family emblem hand-embroidered against each shoulder. He had been allowed to see her only once after his release from custody, and her health had clearly worsened since that nearly disastrous fiasco. Her skin had paled to a sickly yellow beneath the olive complexion, thinning white hair exposing the bumps of her skull. She seemed brittlely thin, her ankles more like knots on sticks covered with bloodless parchment.

He knew Yaenida was not simply old, but
ancient
, in the way only those who could afford repetitive regenerative treatments were. Yet her dark eyes were still as energetic, as shrewd and hard, as the day he had first met her.

“Pratha Yaenida,” he said, trying to keep his pulse down, “I’m not making much real progress at all.”

“Please,” he interrupted more sharply than he intended. The younger women in the corner glanced up with narrowed eyes, murmuring between themselves. “Please,” he repeated, softening his tone. “I am
not
. You don’t do me any favors by lying to me, Yaenida.”