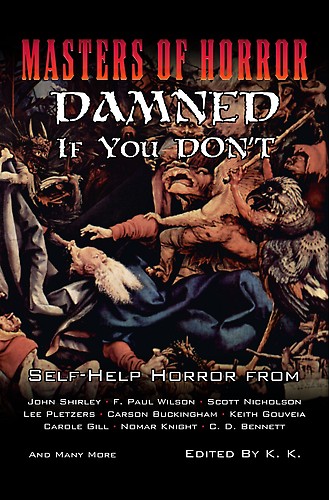 DAMNED If You DON’T

A Triskaideka Books release under license to Writersltd New Zealand and in association with FocusGroup LLC.

This is a work of collected fiction. The events and characters described here are imaginary and are not intended to refer to specific places or living persons.

This book may not be reproduced, transmitted, or stored in whole or in part by any means, including graphic, electronic, or mechanical without the express written consent of the publisher. In the case of E-Book versions, then electronic storage is permitted.

Cover art by Matthias Grünewald, circa 1515. The full piece is from the Isenheim Altarpiece and it's called the Temptation of Saint Anthony. Almost reminiscent of Hieronymous Bosch (Public Domain).

Quote from Leatherwolf’s “Too Much” (STREET READY, Island Records, 1989) Used by permission.

To Lee Pletzers and his crew at Triskaideka Books for the green light; All our masterful contributors (especially Nomar Knight and Harry Mora for letting me get away with literary murder); All at the MASTERS OF HORROR site: Bill W., Chris and Pax Prentiss, Susan Powter, Suzanne LaBatt, Dr. Andrew Weil, Dr. Carolyn Myss, Anthony Robbins, Bill Weider, Bill Phillips, Dean Roberts and the Leatherwolf-pack for the permission…And everyone trying to ‘make it back—beyond the black’.

This book is also for K.K. During the formation of this amazing anthology, Ken suffered a brain aneurysm. All the staff at Triskaideka Books and the authors of this anthology wishes you a speedy recovery, buddy.

To lose my mind…

The situation will never change

In a way of a nasty kind!

Once I start, I just can’t stop

“Control yourself” is what they say,

Just take it to the top!

Just to have a good time…

And if the feeling feels all right,

This time you’ll be mine.

Too much is never enough…

I want to see the light…

What can I do to stay satisfied?

Too much is never enough!”

3.
Easy To Digest by Scott Goriscak

5.
A Kiss for the Damned by Ryan Willox

8.
The Seal by Lee Pletzers

9.
Showdown with Deacon Blues by K.K.

10.
The Turning by Harry Louis Mora

14.
Sins of the Flesh by Nomar Knight

15.
The Tortured Room by Marissa Farrar

18.
Obsessed with a Song by Armand Rosamilla

DAMNED IF YOU DON’T

I used to write sober. I swear to God.

But then I became an adult, and things got complicated.

I used to preach in churches, in front of thousands of people. I was passionate. Then I focused on writing Christian stories about monsters. Church folk just didn’t like that.

Damned if I did, they all said.

People have been drawn towards intoxication ever since the origin of
people
. It’s within our biological makeup to do so, ever since the dawn of
anything
. It’s not our faults. Animals, plants, micro-organisms….anything with a cellular structure and inherent desire to reproduce, it seems, are always looking for a quick fix. So it’s not human-exclusive, this obsessive attraction towards feeling the sort of high we can only achieve by an indulgence in substances we must ingest to experience. Koala bears have it made, for example. The stoners of the animal world, what with their psychedelic eucalyptus. I just found out my hamster gets high. Turns out that sunflower seeds have a substance worthy of pet store warnings on pamphlets, not to feed animals too much for fear of substance abuse and dependence. And nobody judges them for it. We, as intelligent beings who for whatever reason have knowledge of good and evil and self-awareness and all that jazz, are required to regulate our intake of feel-good stuff for the sake of responsibility and coherence and productivity lest we become addicts and find ourselves featured on A&E’s
Intervention
with our brains gone and teeth rotting in between commercials for products with ways to give our teeth a healthy shine.

It’s just not fair that there are consequences for our indulgences. But that’s how it is. And it’s up to us as a race and as individuals to cope with it. And you know, I’m convinced that the answers to how we deal with it all don’t necessarily rely on complete abstinence. Intoxicants are all around us for a reason. If we’re so inclined to partake of this or that, and we enjoy it, we are forced to either acquire the discipline it takes to regiment our high times for the sake of our sober ones, or to abstain only because we allow addiction to take over and potentially ruin everything we live for. But we cannot judge others for whatever makes them strong enough to be able to have that beer or light up that blunt and still be in control during the average day, and we have to recognize that the human ingestion of intoxicating substances has helped shape us as a species to the extent that we wouldn’t have advanced as far as we have without them. In fact, total abstinence would have stunted our growth, being that humanity thrives on experience and emotion and inspiration and feeling. Let’s face it though: we can’t all sit atop our heavenly grassy hills and sniff dandelions and watch the clouds all our lives. We have to live
full
lives. That is why we’re all here to begin with.

Those of us who manage to make the most profound impressions in this world are either the sober inventors of technology or the creative types who get so fucked up on substance that what they create has an effect more profound on us as a whole than anything any average abstinent sober folk can hold a lighter, er, candle to. Take music, for example. Or for that matter, poetry, writing, or just plain storytelling in all its many forms, painting, pottery, acting, any expression of self.

I’ve been writing all my life, and before I did my first drug or took my first alcoholic drink I did just fine with things. Then I turned 18, and I started drinking, indulged in the first type of recreational drug I ever did: LSD. I did a year’s worth of research on that drug before I even tried it. During my acid days, I accumulatively wrote four screenplays, diaries, the greater part of a few novels, and became convinced that God making us in His own image meant that He creates, therefore
we
do. I wrote in great length about a Godzilla-sized giant who demolished condemned apartment buildings with his penis. I’ve written parts of my award-winning novel
The Everborn
and many partial stories and ideas on napkins at parties strung out on various kinds of white powders I had to either smoke or snort, and my record of going without sleep of any kind is eight days solid. Once, I constructed a homemade vagina out of foam and warm water after snorting a line the length and width of two Twizzlers side by side. I indulged in addictions both alone and with famous people, did everything short of injecting anything directly into my bloodstream…that kinda thing always creeped me out.

Nowadays, with that sort of past more than a decade behind me, the path that life has chosen for me in this business of horror writing just wouldn’t be the same without all of the prior outlandish balls-to-the-wall sort of gritty experience and mayhem and abandon and recklessness I put myself through that I can cash in on now just by merely writing about it. Although my darker and more complicated days of addiction are long since gone, I find that the works I write best are best written when I’ve got my trusty fifth of whiskey, a good joint, a pack of smokes, and a drive to no end.

I, Triskaideka Books, and exemplary author K.K. present to you this extraordinary assemblage of authors whose outstanding storytelling skills relevant to substance use and abuse are displayed here in all of their shining glory, whether they’re written under the influence, about the influence, or both, in one central theme which both entertains and incorporates our universal draw and fascination towards the high life.

John Shirley leaves an
Aftertaste
which actually gives you a
foretaste
of what to expect with the rest, highlighting the works of the extraordinary talents of F. Paul Wilson, Lee Pletzers, Carole Gill, and my friend K.K. himself.

When it all boils down to it, according to those who judged me for writing the kinds of things I do…well, yeah, damned if I did.

But in the long run, when I take a look back at all that time I spent writing noteworthy horror stories to an audience so wide as to reach the whole world while under the influence of one thing or another, and someone were to ask me if I’ll write that way again or be influenced by it, my answer will always be...

The monstrously addictive power of crack cocaine lies in the intensity—and the brevity—of the high. Within a matter of moments, you’re back to normal again (or as close to ‘normal’ as anyone on crack ever gets) and ready for more. It’s also relatively cheap—per dose—and doesn’t seem to eat your money as fast as it does, so one month you’re paying cash for it, the next month you’re selling your last remaining pair of shoes for it. One of my best friends, when he lived in Tampa, told me a story of how a thin, wasted man desperately asked him at a 7-11 to buy a
bloodstained baby’s blanket for five dollars.