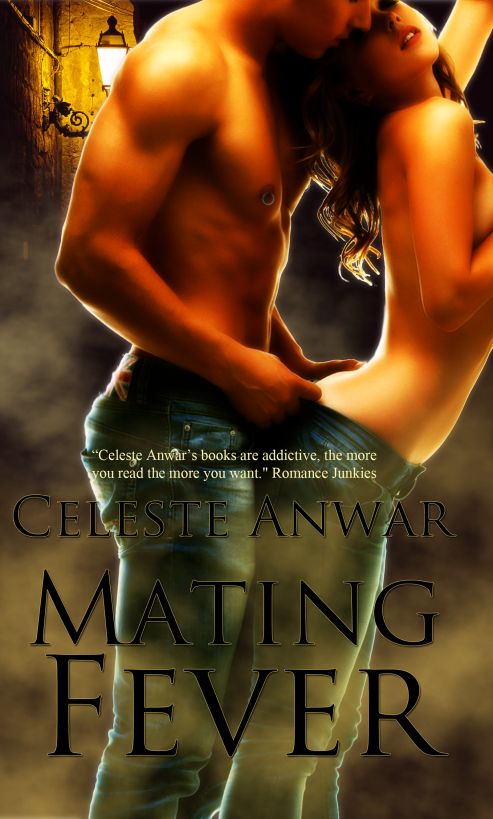 This is a work of fiction. All characters,
events, and places are of the author’s imagination and not to be
confused with fact. Any resemblance to living persons or events is
merely coincidence.

Other titles from Celeste Anwar:

The Color of Twilight

Pleasures of the Flesh

The streets raged with the dizzying sounds
and scents of Mardi Gras in full swing. Stale beer and dirty
gutters permeated the air. The dirtier the street, the better times
could be had. It was like the gauge on a thermometer, and Gabriel
had mastered the art of having a good time long ago.

Women and men laughed in the crowded streets,
spilling drinks and walking drunkenly, twisted and writhed to
music, singing lyrics known only to themselves. Beads jangled like
hollow bits of wood. Torn, dyed feathers floated in the air on a
lazy breeze that carried with it the ripe smell of too many people
too close together.

The voices of drunken revelers warred with
the exciting tempo of a zydeco band playing on one corner and a
blues band on another. An alto saxophone and a clarinet played a
moody, mellow song that stirred the blood of those close enough to
hear it above the dull roar of carousal. Bars with their doors open
wide leached their own brand of music, with DJs pumping out the
tunes and signs offering cheap shots to lure in the tourists.

There was no other city quite like New
Orleans, cozy as a small town with all the amenities of a
metropolis. History drenched every street corner, every balcony on
high, every facade along the waterfront. Traditions ruled the city
with a firm hand, southern justice was always in effect, but
everyone turned a blind eye when it came to the decadence of the
holiday and the attraction of the tourists.

This was a town that survived because of
them.

No, there was no other experience to be had
like that at Mardi Gras.

It was dangerous times for the unwary,
though. He’d never seen so many vamps prowling the streets, hunting
prey, getting fat and drunk off the careless and ignorant. Not that
anyone would believe an underground war raged in the dead of night.
The truce that had held long before he was born was as shaky as a
long tailed cat in a room full of rocking chairs. The Lycan
territories were breached, and the feuds had spilled over onto the
neutral grounds of the historic district--into the main heart of
the city.

Since the vampire lord’s mysterious
disappearance a month or two ago, things had turned from shit, to
rancid shit.

Gabriel Benoit snickered at that thought. The
pack thought he was crazy for braving no man’s land, especially at
night. He didn’t let little things like caution get in his way
though. He was just cocky and confident enough it didn’t bother him
to think of being outnumbered. Some would call it stupidity. He
called it weariness of denying his appetites.

He was bored, and that was a dangerous thing
for a werewolf to be.

It set his nerves on edge, putting him into a
frenzy when otherwise he’d have stayed home to relax. At any other
time, he might have, but he was looking into getting into a bit of
excitement tonight.

Vamps traveled in packs, and when they could,
they supped on powerful Lycan blood. One bite was enough to take a
Lycan down, paralyzed with their venom. If two struck, it was
wolfie for dinner. Their potent, Lycan blood was the whole reason
this damned war had been started in the first place, and frankly,
Gabriel was tired of ceding hunting grounds and territory to the
blood suckers. It was getting to where no decent Lycan could even
roam the streets or bayous alone anymore--except during the daytime
when the bloodsuckers had to sleep.

If he could’ve, he’d give up all his Lycan
powers to just be normal and not have to worry with the
bull-shitting politics and wars, the never ending battles that
always seemed to flare and stir up the natives. It was just a damn
miracle some tabloid hadn’t caught on and got the humans started on
a vamp and Lycan hunting season to wipe out everyone with unnatural
blood and inhuman power.

Gabriel sighed. He just wanted a simple life,
with a woman ready, willing, and waiting in his bed ... and a car
that stayed running more often than not. He didn’t think that was
too much to ask.

Still, Gabriel relished the thought of taking
on a pack of vampires, found it invigorating as only a man with too
much time on his hands could. Thus, he’d come to the “party”
looking for action ... of one type or another.

At this point, anything would do.

Moths clinked like tinny music against the
heated streetlight above him. The light flickered, making him
almost annoyed enough to move--but not quite. Gabriel leaned
against the lamp post, his arms crossed over his chest, lazily
perusing the crowd with an easy grin and the heat of spiced rum
flowing through his veins.

Even without the risk of battle, the others
would not have come to the festivities. They felt alienated from
the humans, too obviously different. Many had given up the simple
carefree life of pure human blood so long ago that they couldn’t
connect with anyone that wasn’t like them.

Gabriel suffered no such qualms, himself. But
more and more, it seemed they grew more animalistic and less human
as time wore on. He would be worried except for the fact that that
was what had allowed them to survive through the centuries to start
with.

A woman smiled as she walked by, catching his
eye. She giggled, hooked her hands under the hem of her shirt, and
flashed him before running off. Gabriel grinned, shaking his
head.

He never denied himself this pleasure. This
was his favorite time of the year, when the underbelly of the city
exposed itself and its impurities were reveled in as only proper
sinners could appreciate.

Plus, he enjoyed seeing women flash their
breasts for something so trifling as beaded necklaces and a smile
from an appreciative man.

Modern times were good, to say the least.

He’d been lounging against the cool metal
post for some time, enjoying the sweet blues spilling from a local
bar and lost in his thoughts, when a scent tickled his nose,
strange yet familiar. His beast leapt instantly to life, ruffling
the hair on the back of his neck with awareness.

Gabriel straightened suddenly, sniffing the
wafting air. Past the cloying alcohol and perspiration, he caught
it again on the wind. Faint, it uncurled with a spicy sweetness in
his senses like a rare perfume.

He dropped off the curb and pushed through
the crowded street through sweat slick bodies, following the scent.
The winter had been unseasonably warm this year, probably due to
global warming, and they hadn’t managed to suffer a single hard
frost all year. With the crush of bodies in the street, the
temperature had risen.

Again that scent teased, taunting, drawing
him in until he felt helpless to do anything but follow the path
along the breeze.

Pale skin flashed before him as revelers
begged for beads from those standing above in balconies. He ignored
them all, intent on his quarry, stopping only when he found the
source of his affliction.

Gabriel looped an arm around an iron lamp
post and stepped up on the base, gaining height over the crowd, his
eyes drawn to the possessor of that alluring scent. Unrelenting, it
called to him, enticing his senses, drawing him in. He knew
instinctively she was the one ... the one that taunted him
unawares.

She was trapped in the throng, walled in by
bodies. She looked mildly worried, as though she was claustrophobic
but determined to have a good time regardless of her own
discomfort.

She looked like a china doll: fragile
porcelain skin, baby blue eyes, a pink blush tingeing her cheeks,
reacting from the alcohol she’d consumed or the crush of bodies
around her. She smiled and pushed back a loose tendril of pale
blonde hair behind her ear. One pert breast lifted with the action,
and even with the distance he caught the slight pucker of her
nipple beneath the thin cotton.

He rubbed one thumb against his bottom lip,
drawn by her movement and imagined sensation.

An instant fog of lust clouded his brain. She
was in heat. Never had he smelled a woman so ripe for fucking. The
scent and knowledge threatened to burn away all rational thought.
His hands clenched into tight fists, his fingers digging into his
palms. His arms bulged with the effort to restrain himself. For a
few minutes, he could think of nothing but taking her and laying
her on the street, pushing her legs apart and burying his cock deep
inside her.

The knowledge that he was reacting as an
animal didn’t stop the feelings raging in his blood. If anything,
they worsened. His balls tightened, his cock throbbed. He gritted
his teeth, pained with the hot surge of lust-filled blood in his
groin.

Slowly, his beast backed down when it
realized it would get no satiation. Thoughts churned like sluggish
clock wheels, and he finally realized something had tamed the waves
of pheromones fanning off her, or else he would have been driven to
nothing but pure animal instinct. He didn’t flatter himself by
thinking it was his strength of will that had kept him in
control.

For the first time since he’d been turned, it
had nearly slipped. He didn’t want to think about what could’ve
happened.

He continued calming himself, watching her
dance, sip her drink. One of thousands, she was more precious than
she could ever begin to imagine. And he’d found her. He wondered
where she’d come from, how she’d gotten here.

She could not have been in the city long or
else she’d not be standing here, but be trapped in some alley, her
skirt up to her waist with a slick cock thrusting into her.

His groin spasmed at the illicit thought, of
parting her soft thighs and smelling her want of him, of feeling
the thick cream that would ease his passage inside her.

Had the spicy musk of heat been in full
effect, he and any other Lycan would’ve been on her like the pack
of beasts they were. He knew he could not allow that to happen--and
it would if she wasn’t careful.

He growled low in his throat, animal
instincts surging to the surface once more. Then and there, he
determined he would take her ... before another could. She was his,
and he had every intention of staking his claim to her,
tonight.

Someone jostled her elbow from behind,
sending her plastic cup flying from her grasp to clatter dully onto
the ground.

A hand snaked out and snatched the necklace
from her neck. Her throat burned as the chain snapped under the
pressure. The thief took off through the crowd before she could
even raise a hand to stop him.

Jessica gasped in outrage, following
the thief without thinking. The necklace was her only physical link
to her past. She was never supposed to take it
off--
never
. She couldn’t lose
it!

Jessica pushed through the milling throng,
running after him as best she could. He stayed ahead of her,
slippery as an eel, weaving through the bodies effortlessly while
she was hemmed in. She soon lost him, and jumped up to look over
the crowd, ignoring the angry looks she got. She spotted the hooded
figure running toward an alley squashed between a strip club and a
bar.