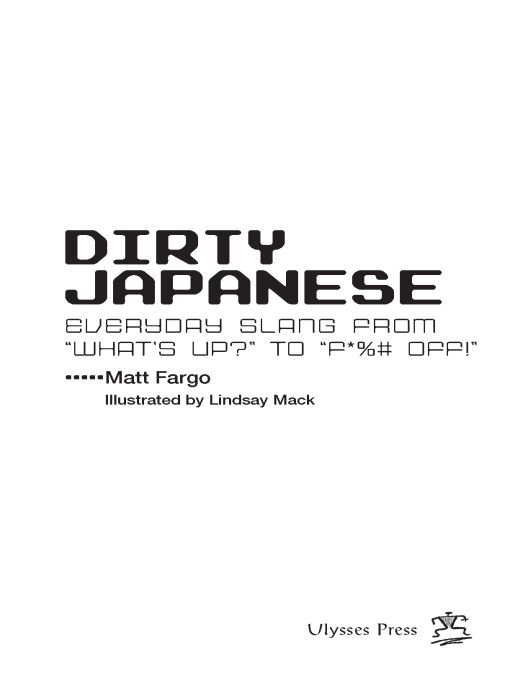 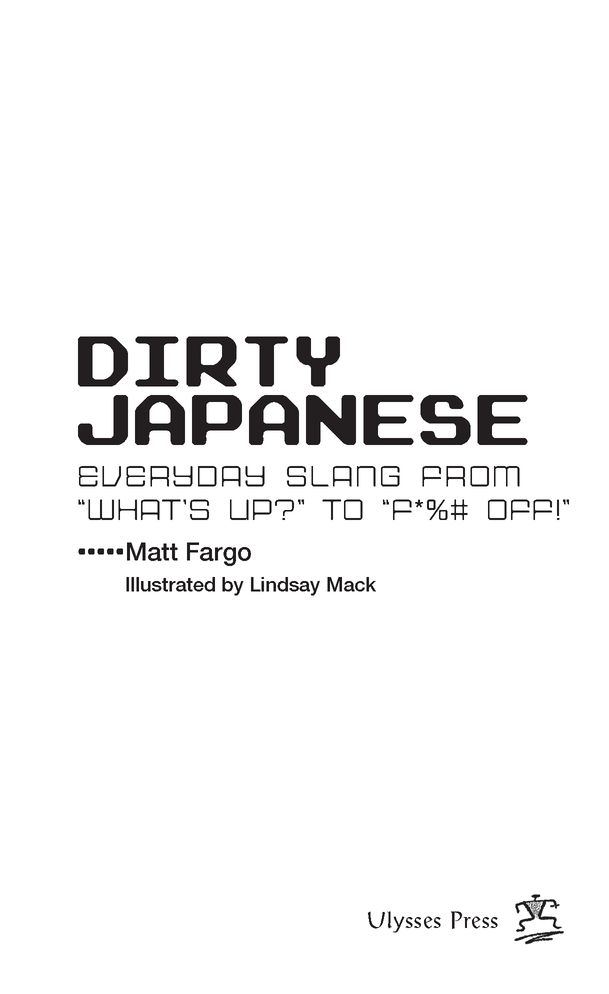 Soli Tansman Gloria
Acknowlegments
I’d like to thank Professor Alan Tansman for being as generous as he is wise, Charlie Emrich, Matthew Suidan, Tami Downes and Brooke Ray Smith for putting up with ridiculous questions about human anatomy, Alice for teaching me to love again, Nakayama Risa for advice about anime and manga, Seigo Nakao for his sagacious vetting, Oooka Hironori for being absurdly handsome, Ito Gabin for blowing my mind, Zach Anderson and Aaron Cavin for their cylindrical beards, all the people at Ulysses Press for tolerating my dirty mouth, and of course Kameko for her ineffable shell. I love you all.
USING THIS BOOK
I wrote this book assuming that you already know at least enough Japanese to get by. Maybe you’ve spent enough time in Japan to get the hang of the basics. Or maybe you nerded out on so much anime that you acquired the entire Gundam vocabulary through osmosis. Or listened to those “Learn Japanese in 24 Hours” CDs until you can order blowfish sashimi without batting an eyelid. Whatever, this book is designed to expand your Japanese past the edge of conventional learning methods.
One thing about the Japanese language, which you’ll find me repeating all through this book—it’s very, very contextual. What you say depends on who you are speaking to, and this book is meant to be used in the company of friends. So be warned that if you say any of the words and phrases in Dirty Japanese to someone older than you, or to a stranger of any age, you can expect them to look at you as if you’d just peed in their kitchen sink.
But when you’re among friends or fellow debauchers, let’s face it—“Konnichiwa, yoroshiku onegai shimasu” is going to make you stand out like… well… a foreigner.
So Dirty Japanese is all about the up-to-date slangish words, super-casual phrases, sexy sayings, and innuendos
that you aren’t going to find anywhere else. (And yes, there’s some just plain rude, deficky stuff too. Fuck it—readers with delicate sensibilities can skip over those pages and still get plenty of benefit from the rest of the book.)
Each word or phrase in English is followed by its Japanese equivalent, first as it’s written in Japanese characters and then spelled out in the Roman alphabet. A lot of people
〈〈〈〈READING JAPANESE〉〉〉〉
If you haven’t tackled the challenge of learning to read Japanese yet, it’s not as hard as it looks like it should be. Japanese writing uses three (or maybe four) different sets of characters.
HIRAGANA, full of loops and curves, is an “alphabet” made up of 46 characters representing every sound in the Japanese language—a, i, u, e, o, ka, ki, ku, ke, ko, sa, shi, su, se, so, ta, chi, tsu . . . and so on. It is usually used for writing basic Japanese words. The following words are written in hiragana:
KATAKANA, a simple, angular “alphabet,” also has 46 characters. Each one corresponds to a hiragana character, though there can be subtle differences in pronunciation that you don’t really need to worry about. It is usually used for writing borrowed foreign words (like “computer”), foreign names, company names, and newly coined Japanese words (like “karaoke”). Here are some examples of katakana:
who speak pretty decent Japanese can’t read a word of it—and you don’t really need to. Well, not unless you hope to find your way around Tokyo on your own. You can still get everything in this book from the Roman alphabet versions.
ADS
15.4Mb size Format: txt, pdf, ePub

A Faire in Paradise by Tianna Xander
A Love for Safekeeping by Gail Gaymer Martin
36: A Novel by Dirk Patton
A Southern Girl by John Warley
Summer Son by Anna Martin
The Girl in the Green Raincoat by Laura Lippman
Game On! (Seaside Heat) by Dani Jace
Ed Lynskey - Isabel and Alma Trumbo 02 - The Cashmere Shroud by Ed Lynskey
The Silver Anniversary Murder by Lee Harris
The Half Has Never Been Told: Slavery and the Making of American Capitalism by Edward Baptist