Read Meant to Be Online 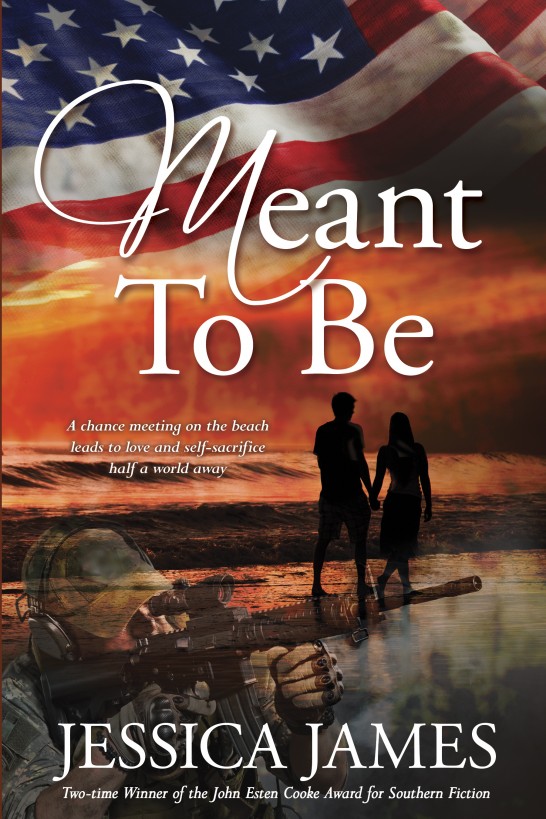 Meant To Be: A Novel of Honor and
Duty

“
A heart-rending,
white-knuckle journey into the courageous lives of our nation’s
heroes. Realistic, moving, and uplifting.
Meant to Be
shows us the meaning of
commitment—to country, and to love.”
–
Jocelyn Green, award-winning author of the Heroines Behind the
Lines Civil War series and co-author of
The
5 Love Languages Military Edition

“Reminds me
of
American Sniper
and
Lone Survivor
, but accompanied with an epic and beautiful romance that is
completely unforgettable."
– Lauren
Hoff, United States Air Force

This is a work of fiction.
Characters, names, locations, and events are all products of the
author’s imagination. Any similarities to actual events or real
persons are completely coincidental.

We hope you enjoy this book from
Patriot Press. Our goal is to provide high-quality,
thought-provoking books that honor the spirit, courage, and
devotion of American heroes, past and present.

This ebook is licensed
for your personal enjoyment only. This ebook may not be re-sold or
given away to other people. If you would like to share this book
with another person, please purchase an additional copy for each
person. If you’re reading this book and did not purchase it, or it
was not purchased for your use only, then please return to
Smashwords.com and purchase your own copy.
Thank you for respecting the hard work of this author.

All rights reserved, including the right to
reproduce this book, or portions thereof, in any form.

To my loyal group of readers and Beta Readers,
thank you for helping me craft this novel. And to our amazing
troops all over the world, thank you for your courage, sacrifice,
and service.

A homicide detective and a reporter work
together to solve a string of highly suspicious murders. Will the
answers they find and the dangers they encounter draw them
together? Or tear them apart?

(Order DEADLINE on April 9
through April 19, 2016 and receive a free book of your choice from
the author).

A retired U.S. Navy SEAL
with a new private security company must save his wife from the
hands of a violent rival from his past in this edge-of-your seat
suspense novel.

(An alternative ending
to
Shades of Gray
)

From the Heart: Love Stories and Letters from the Civil
War

“The opposite for courage is not cowardice,
it is conformity. Even a dead fish can go with the flow.”

Lauren Cantrell inhaled
the salty air and tucked her hands into her sweatshirt to warm them
against the ocean breeze. The sun was barely a hint in the
distance, just a ribbon of orange-laced clouds sandwiched between
midnight blue water and a vast expanse of dark sky. Staring in
silence at the colorful horizon, she heard the first sullen call of
a seagull join the rhythmic, soothing sound of waves licking the
shore.

She loved this time of day. With the
beach all but empty, everything appeared still except for the
constant, cadenced ebb and flow of the surf. She pictured the ocean
as a living thing and this was its pulse and heartbeat. From the
glittering sun on its surface to the thriving unseen dimensions
below, the sea represented life in all its majesty and
mystery.

Lauren closed her eyes and took
another deep breath, allowing the sensation of peace and
contentment to wash over her. Standing at the water’s edge, she
marveled at the ocean’s infinite power, a living force that could
welcome her with open arms—or eat her alive at will.

The sudden shock of cold water hitting
her toes brought Lauren back from her reverie. As she leaned down
to roll up her sweatpants, she spotted a white circular object in
the sand and stepped excitedly into the receding water to retrieve
it. Just as she bent down to grab the shell from the rush of an
incoming wave, a gust of wind lifted her ball cap and sent it
sailing down the beach. By the time she snatched the sand dollar
out of the water and turned around, the hat was well out of reach,
tumbling and bouncing down the beach like it had assumed a life of
its own.

“
Darn it. I just bought
that yesterday.” Lauren shoved the shell into her sweatshirt pocket
and sprinted after the hat, but stopped when an approaching jogger
scooped it up in mid-bounce without breaking his stride.

When he reached Lauren, he stopped.
“This yours?”

“
Yeah. Thanks. Sorry to
interrupt your run.” As Lauren took the hat and gazed up into the
jogger’s steel gray eyes, her heart gave a sudden lurch. It only
lasted a moment, kind of like the flash from a lightning bolt, but
it caught her off guard and left her incapable of speech. She stood
spellbound, staring at him in awkward and uncomfortable
silence.

“
No problem, ma’am.” The
sound of his deep voice affected her almost as much as his
captivating good looks. Lauren dropped her gaze to the hat she held
in her hand, anxiously trying to pull her drifting thoughts
together, and then focused her attention once again on the
jogger.

His smile revealed straight white
teeth, and his manners implied a military background. Yet his brown
hair curled from beneath the ball cap he wore, and his face showed
more than a day’s worth of stubble. He continued looking down at
her with the kind of careless confidence that comes from immense
physical strength, and when she didn’t say anything else, nodded
politely and continued his jog.

Lauren sat down where she
stood and put her head between her knees.
Geez! They don’t make them like that where I live.
She raised her head and stared out into the ocean,
mumbling out loud, “Way to make conversation with one of the most
gorgeous men ever created, Lauren.”

Wishing she had some reason to talk to
him again, she looked to her left, but he must have gone from a jog
to a sprint because he was now just a dot in the distance on the
long stretch of beach.

Exasperated with herself, Lauren
lowered her head again. Oh well. It wasn’t like anything would have
come of it anyway. She reminded herself she came here to relax, and
that is what she intended to do. She needed this place. Tomorrow
she would be on a plane back to that God forsaken land where she’d
spent the last five years of her life. This was her chance to
unwind and slow down. Just breathe.

It had been two weeks since she’d
landed in the States—just enough time to get accustomed to the
culture and lifestyle of America again, but not enough time to
really relax. In fact, the first ten days had brought their own
level of stress as she’d attended a seemingly endless barrage of
meetings, conferences, and classified briefings. Now it was just
her, the sun and the sand. She intended to use the last twenty-four
hours to revitalize her senses and restore her soul. She didn’t
have the time or the inclination to be distracted by romantic
notions.

Inhaling the salty fragrance of the
ocean again, Lauren tried to settle her mind. With her forehead
resting on her knees, she dug her hands into the sand and let it
fall out slowly between her fingers. Even with her eyes closed, she
knew the sun had fully breached the horizon. She could feel the
light flooding over her, enveloping her with its warmth like a
comforting hug.

Relax. Relax.
Lauren continued to clear her mind and concentrate
on soaking up the sensations, allowing the sounds and scents to
wash over her, bringing back memories of carefree days and
seemingly endless summers spent here. Even though she hadn’t
visited Ocean City for years, it still felt comfortable,
familiar—almost like coming home.

No wonder. A stroll on the iconic
Boardwalk the previous evening had taken her past many of the same
businesses she remembered as a child. Hard to believe almost a
decade had passed since last she’d strolled down those weathered
boards, and now another generation of beach-goers was learning
about this vibrant beach getaway in Maryland.

The relaxed and welcoming atmosphere
was exactly why Lauren had chosen this place. When her boss had
tacked two more days to her time in the States and told her to go
anywhere she wanted to “think over” an important decision, she knew
she had to come here. Experience had taught her decisions were
easier to make when your toes were buried in the sand—even life and
death ones.

With her palms straight down, Lauren
inhaled slowly again and watched images flit through her mind like
a movie. Not wanting to miss anything, she became absorbed in
savoring each thought and storing each recollection. This place was
special—more like a tradition than just a vacation place—with rich
memories that could never be replaced. How many magnificent sun
swept days had she spent here with friends and family—celebrating,
relaxing, laughing…living? With her parents now gone, the people
from her past seemed almost like figments of her imagination or
characters from a dream. She didn’t want to forget anything. She
didn’t want to move. Concentrating on breathing deep and slow, she
tried to memorize everything about this moment in time—the feel of
the sand, the warmth of the sun, the sound of the ocean. She wanted
to be able to recall every detail over the next few months, no
matter what happened or where she was.

A Few Green Leaves by Barbara Pym
The Face of Fear by Dean Koontz
Hot Erotica: Romantic Flights( Mile High Club) by Sexton, Selena
The Mechanic's Mate by Mikea Howard
Asimov's Science Fiction: October/November 2013 by Penny Publications
It's Complicated by Julia Kent
BloodGifted by Tima Maria Lacoba
Down The Hatch by John Winton
Vowed in Shadows by Jessa Slade
The Mistress of His Manor by Catherine George