Read Medusa, A Love Story (The Loves of Olympus) Online

Medusa, A Love Story (The Loves of Olympus) 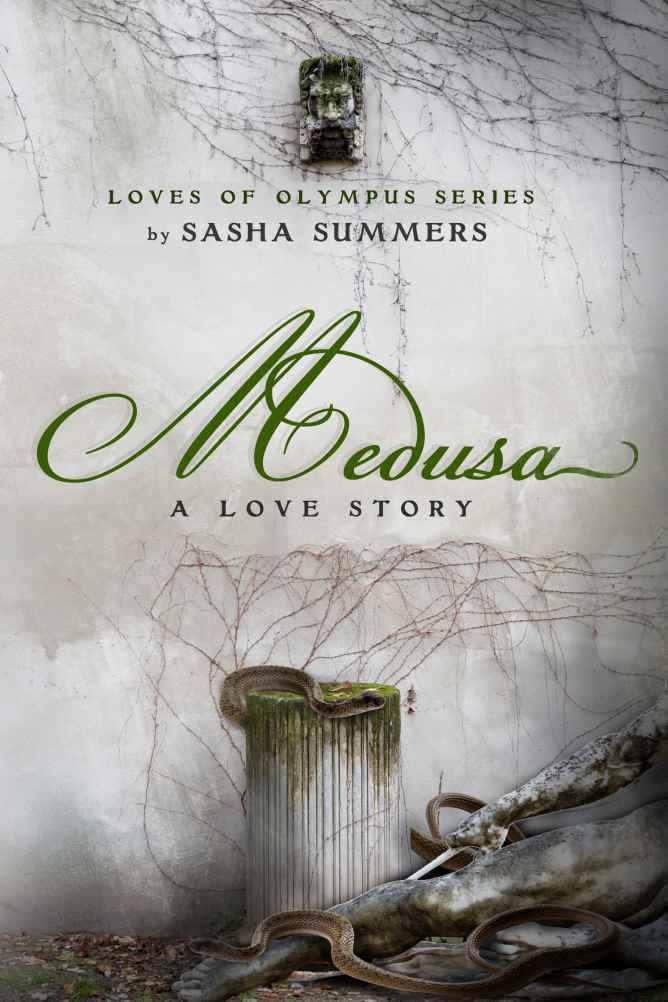 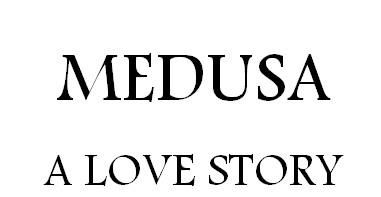 Ebooks/Books are not transferable. They cannot be sold, shared or given away as it is an infringement on the copyright of this work.

This book is a work of fiction. The names, characters, places and incidents are products of the writer’s imagination or have been used fictitiously and are not to be construed as real. Any resemblance to persons, living or dead, actual events, locale or organizations is entirely coincidental.

You’ve always believed in me.

You are
my
hero.

Perseus’ heart pounded. Sweat ran down his forehead and into his eyes, but he ignored it. His hold tightened on the sword Zeus had given him as he pressed himself against the uneven outer stones of the temple ruins.

He peered inside cautiously, his eyes trained to the ground, searching for shadows – any trace of movement. He took a deep breath, readying himself. He was alone on his quest, but he had the Gods’ favor. With their gifts of weaponry, surely he would prevail.

Time was his enemy, second only to the monster he’d come to kill.

He placed Hades’ helmet upon his head, rendering him invisible to his foe. He raised the shield, a gift from Athena, and stepped inside the crumbling temple. A candle burned within, its flames casting shadows that jumped and fell.

A steady tapping, rhythmic upon the broken flagstones beneath his feet, pricked the hair along his neck. His heart accelerated, and he braced himself before turning a wary eye towards the sound’s source.

It was the blood of the Gorgon’s guard dripping from his sword, nothing more. He closed his eyes and tried to calm his nerves, swiping the sword along his cloak to cease the telling sound.

He must keep his wits about him. He must defeat the monster; the fate of the woman he loved, his lady mother and all of Seriphos were in his hands. He could not fail.

He knew to be careful.

He knew what he must do.

And, just as important, he knew what he must not do.

To look upon Medusa was fatal. Not an easy end, but a painful transformation from life to death. One look from her serpent locks hardened the body, the blood, the skin, into brittle grey stone. What remained was but an effigy of the human form, a pathetic tribute seen only by the creature in her dim lair.

There was a rumor, one he would test this day, that Medusa’s death would reverse this spell. Once she was dead, the horrid curse would be broken, and those poor souls trapped and punished by the witch set free. If…no,
when
he succeeded, he would have freed these people too, enabling them to leave this bleak place and return to their homes.

He moved stealthily, willing his steps to be silent. He needed the advantage if he was to cut off Medusa’s head – a weapon, even after her death. A weapon he would use to turn the beast, Cetus, to stone, and free his captured love, Andromeda.

His toe dislodged a stone, sending it across the floor with a resounding racket.

“Perseus? Are you Perseus, then?” A woman’s voice, lilting and melodic, echoed from within. “Are you the boy come to set me free?”

Perseus was startled. How did she know of him? Or of his quest?

She laughed, a bittersweet sound. “What is it you want with my head? Gold? Power? Or do you wish to be a hero, celebrated by the Gods?”

“No.” He stumbled, his agitation making him clumsy. The floor beneath his feet was covered in rubble and rocks. It was hard to navigate while keeping his back flat against the wall.

His hand clenched his sword. He was only slightly appeased by his invisibility – for Medusa was nowhere to be seen either.

“No?” She laughed again. “You’ve made me curious now, brave Perseus. What brings you to hunt such a dangerous trophy?”

“Something you know nothing of, Gorgon. I come in the name of love. For the love of my lady.” His voice rang out, echoing off the walls.

There was silence. No breath, no movement. Even the flickering candles seemed to still and wait.

He swallowed down the bile that threatened to choke him, fighting the urge to run – to hide. His very breath might expose him as her target.

“Love?” Her voice broke, surprising him. “Well, then, Perseus, you must heed my directions if you are to take my head without turning yourself into stone. I will have you succeed on your quest…for love.” He’d never heard such anguish.

Perseus’ heart pounded. What trick was this?

“And, if the Gods are finally done with me, I might at last find peace in Tartarus…or Hades before this day is through.” She laughed sadly, then said, “Listen closely, boy.”

But mighty Bion swayed where he stood. His broad chest rose and fell raggedly. He shook his head, visibly struggling to maintain his balance.

Ariston sighed. He felt no pity, only impatience. Each day the Persians sailed closer to the mainland. Each day he pushed these men, heedless of their fatigue. Their lives depended upon it.

These men were painters, scholars, philosophers, tradesmen, and servants, yes, but they were Greek. And Greece needed them now.

No. Greece needs skilled soldiers to defend her shores. But she must make do with these.

The men surrounding him offered little to be intimidated by, no matter how hard they drilled or practiced. He would pray to Athena and Ares. If the Gods heard his prayers, these men’s bodies would become as fierce as the hearts in their chests. And then the Persians would know what fear was.

Ariston straightened his shoulders, smiled smugly at his exhausted sparring partner, and swung his sword once in challenge. Bion took the bait, surging forward on clumsy feet. His sword arm, as thick as Ariston’s thigh, cleaved the air with a surprising whistle.

Ariston dodged the blade, pivoting on the ball of his foot to come behind Bion. He placed his foot at the base of the man’s spine and shoved. Bion pitched forward, but caught himself.

“Good,” Ariston called out. He narrowed his gaze, watching as Bion rallied.

The giant spun, his sword solid as it met Ariston’s. Their blades slid, the metallic grate rivaling the sound of the waves pounding the beach before them.

Ariston moved suddenly, planting his foot in the larger man’s chest and knocking him back. “Be mindful of more than your opponent’s weapon.”

Bion snarled, launching himself forward. Ariston stood his ground, side-stepping at the last moment and bringing his elbow forcefully into Bion’s side. As his opponent groaned in pain and frustration, Ariston caught sight of the sun.

It was near sunset… A surge of energy rushed through him – anticipation tightened his chest.

But he lost sight of Bion. He did not realize he was beaten until he was sailing through the air to land solidly on his back.

A chorus of cheers went up, and he smiled in spite of his defeat. Bion held his arms high in victory, surrounded by those who’d watched the match. All shared in their comrade’s triumph, for few had knocked a warrior of Ariston’s skill from his feet.

“The savior of Laurium falls!” Someone cheered.

“He bears scars from Aeginian spears and Persian arrows, where is your mark, Bion?” another asked, laughing.

“Upon his pride,” Bion answered with relish.

Ariston’s smile grew as the men continued to congratulate Bion and clap his broad back.

Ariston quickly waved a young attendant forward, shaking the sand from his hair as he did so. He plunged his hands into the basin the boy offered, splashing water on his face and chest. Once clean, he hurriedly laced his greaves onto his wrists and clasped his thick cloak about his shoulders. Only after he’d readied himself for the temple and collected his shield and spear did he call out, “Tomorrow I won’t go so easy on you, Bion.”

Bion laughed. “Then I’d do well to enjoy the spoils of my victory tonight.”

Ariston nodded, placed his helmet on his head, and sprinted from the hoplites’ encampment towards the Acropolis. Each step took him farther from the art of war and closer to his duty to the Goddess. He welcomed the change, the quiet tranquility.

While his blood hungered for the thrill of the fight, his time at the Temple of Athena Polias had stirred him as nothing else…

Once he stood on the steps of the temple, he removed his helmet and turned his face towards the retreating rays of the evening sun. His eyes closed as a cool breeze lifted the cloak from his shoulders. It promised to be a fine evening and a chill night.

His gaze swept the horizon, studying the temple paths and making note of any activity in the courtyard.

He heard her arranging the day’s offerings within the temple. He turned, eyes narrowing as he searched the dim temple interior. Even in the flickering candlelight, she seemed to glide effortlessly.

She would leave with the sun, they both would. Duty required he escort her home. It was duty that brought him to Athens – to his country, his family, and his Goddess. And it was duty that required him to be graced by her loveliness each day.

Lovely or no, it mattered not. To think on her or grow distracted by her presence was foolish. He was not a foolish man.

He took a deep breath of the bracing air, clearing his head.

War would soon find them. The Persians’ marauding and skirmishes left no room for doubt. And when it came, his time here would be over. These sunsets, this sacred place, the company he kept, would be but a memory. Memories he would hold dear.

He gazed upon the Temple of Athena with appreciation. In all of Greece, in all of his travels, he knew the Goddess of Wisdom must find this shrine the most pleasing. It perched almost precariously at the edge of the rock, providing a key defensive observation point for the Goddess and her city.