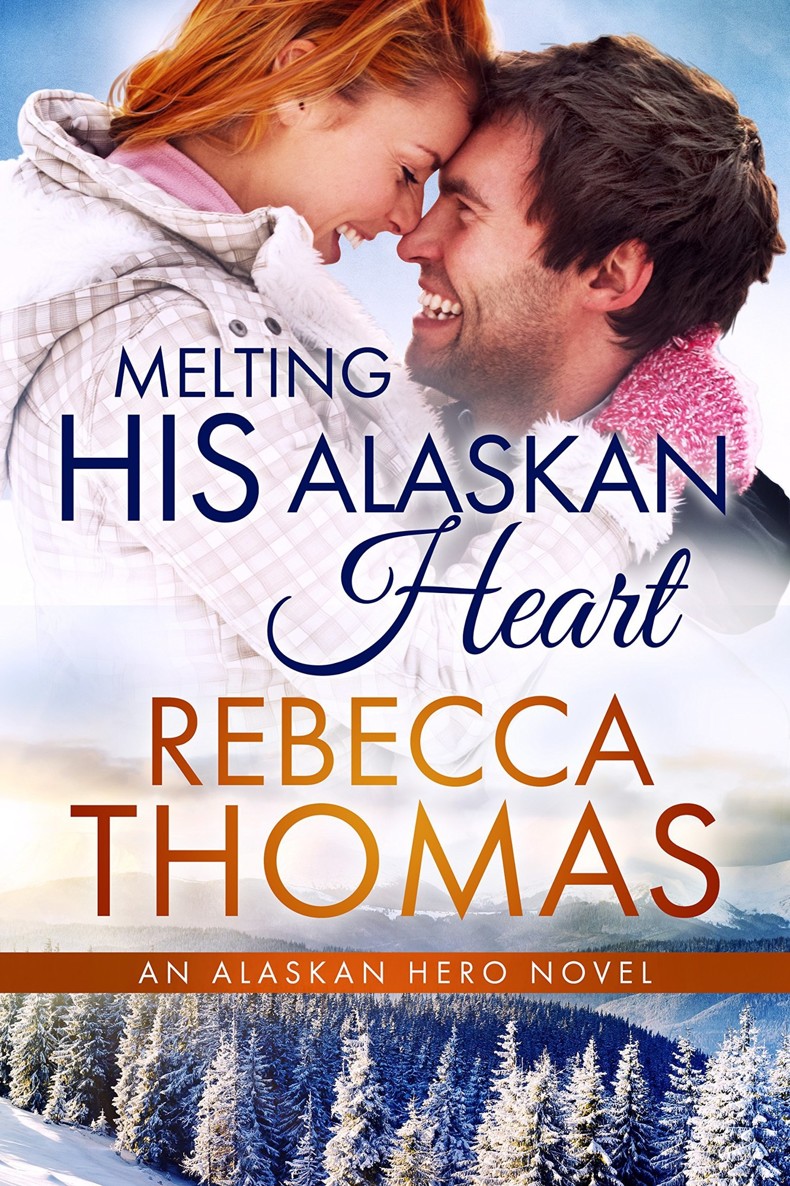 Join Rebecca’s
Newsletter
for updates on new releases and giveaways.

For Rhonda and Karie

Ethan’s cell phone vibrated in his front pocket again. He’d ignored it the first two times, but annoyance at the buzzing sound got the better of him. Flipping up his welding hood, he set down the TIG torch and removed his gloves. He had about an inch to go to reach the end of the snow machine’s ski and the repair would be complete, but apparently, the caller wouldn’t wait.

Digging the cell phone out of his pocket, he checked the screen and saw it was his brother. What was so important that he couldn’t just leave a message? He placed the phone to his ear. “This better be good.”

“It is. I promise,” Dane said in a raspy voice. “Why don’t you ever answer your damn phone? Listen…hang on—”

“I’m sick,” Dane muttered. “Here’s the deal. I have this New Year’s masquerade party tonight. I obviously can’t go, but you know I can’t miss it either.”

If Dane was that ill, he should be calling a doctor. “You can’t help it if you’re sick. Just tell them.”

“I’ve already missed my quota of charity events. I can’t miss any more.”

“Come on, what can they do if you don’t show up?” Ethan gave a noncommittal shrug. “Give you extra time in the penalty box?” Although he had to admit Dane sounded awful. “What do you need? Want me to call your team doctor?”

“The hell you say?” Had his brother lost his marbles along with his stomach contents? Ethan must have misunderstood.

“If I had another choice, I wouldn’t ask you. I’ll be in violation of my contract if I don’t attend.” Dane coughed and Ethan wondered if it was for dramatic effect or if he really was down and out.

“It’s a costume party,” Dane continued. “No one will know it’s you.”

“So let me get this straight.” Ethan reaffixed the phone more snuggly against his ear. “You skipped some of the events you’re contracted to attend, and now you’re on the hook.”

Ethan heard more coughing, retching, and the toilet flush again. Dane came back on the phone and cleared his throat. “I couldn’t attend the other events for good reasons.”

“Let me take a wild guess at what some of those
reasons
might be.” Dane’s party boy ways were apparently catching up with him and Ethan wasn’t about to bail him out.

“I’m really not feeling well, Ethan. Do you think I would ask if I didn’t need you?” Dane coughed. “Our new manager is a real jackass. I’ve got to attend or he’ll fine me.” Dane gave a throaty sigh. “Listen…there are going to be plenty of hot masked women there. Do you think I would miss it on purpose?”

Ethan debated whether to believe him or not. “For all I know, you’re hung over.”

“I’m not hung over. I’ve attended plenty of these events hung over. What’s it going to take to convince you? I have the costume. It’s a knight. The mask covers your eyes and nose. Our mouths and jaws look enough alike, no one will ever know. We’re virtually the same height. I’m broader in the chest and more handsome, but who’s going to know?”

“You’re pushing it, little bro,” Ethan bit off the words. “Have Travis do it.”

“He doesn’t look enough like me, and he’s not in Anchorage. You are. Plus, he’d try to talk to everyone. I just need you to make a brief appearance. Have a drink or two and leave. I’ll have my driver pick you up.”

The beginnings of panic settled in Ethan’s chest. He didn’t do well with crowds and large groups of people. Wait. Was he really considering doing this? “No. It sounds ludicrous. They have to understand you’re not well.”

“I have the penthouse suite at the Captain Cook reserved, for God’s sakes. Charge anything you want to my account.” Dane rattled on as though he’d never said a word. “Why don’t you live a little for a change? Just have a drink, talk nice to the ladies, eat the food and leave, but don’t let the penthouse go to waste…at least stay the night there. You can watch football on the big screen in the morning. Have a mini-vacation.”

Ethan searched his brain for reasons to refuse. He immediately thought about the scar across his right eye, but no one would see it behind the mask. No one would know it was him, except Dane. It was a harmless way to help his brother. Wasn’t it?

“You still there?” Dane asked.

“I’ll owe you. Anything. Ask me anything and it’s yours.”

“It’s a charity event. It’s for a good cause…the literacy council, I think.”

“See, you don’t even know what cause it’s for. All this fame and fortune has gone to your head.” Ethan didn’t completely believe that, but being the big brother, it was his job to keep Dane humble.

“I’m too sick to listen to a lecture. I’m about to hurl again. Are you going to help me or not?”

“Send your car over to pick me up.” Ethan slid his phone shut and stared blankly at it. He had planned to stay home and watch
Dateline
tonight. He didn’t feel like riding in on his white horse to save the day. “It figures he has a knight costume,” he mumbled under his breath. He removed his welding leathers and hood and put them in the closet.

A shower was in order before the limo arrived. Ethan walked upstairs from the garage into his apartment. He wondered if Dane’s phone call wasn’t a ploy to get him out in a social environment, but in Dane’s defense, he did sound terrible.

The only reason Ethan agreed, besides the fact that the event was for charity, was because he didn’t have to be himself. Instead of being the lonely depressed man whose wife died in a car accident, he could be Dane Forrester, NHL superstar center, and admired by millions.

As much as he loved his sister Fiona and his mom, they constantly tried to set him up on dates, and he was tired of it. He wasn’t ready. He didn’t know if he’d ever be ready to date again.

As a firefighter working in Anchorage, his shift had ended that morning. He was scheduled to fly back to Gold Creek where he assisted with the outdoor activities at their family-owned lodge. He kept himself busy. He knew he’d have to re-enter the world eventually, on some level, but not yet.

In the bathroom, he looked in the mirror—not at his face, but at his scar. It started on his forehead, burned through most of his eyebrow, and ended below his eye. The doctors said how lucky he was not to have lost his vision in that eye. Yeah, lucky. He’d found only misery in the days following the fiery five-car pileup and no real joy since, except when he immersed himself in welding—that was the only time when he could forget for a while.

E
THAN RODE
the limo to Dane’s house in the hills east of Anchorage. He wasn’t exactly comfortable in Dane’s world, except he’d gone to enough Alaska Fury
events to be able to blend in with the other players. He could talk sports—hockey, in particular—with the best of them. The idea of being Dane for the evening might be kind of fun. Lord only knew, he hadn’t had any
fun
for a long time and maybe he was due.

Ethan knocked on the front door. His brother had better be good and sick or he’d back out of the deal faster than you could say
ice hockey
.

Dane greeted him at the front door wearing a checkered robe, slippers, beard growth, and a pale complexion.

“Wow.” Ethan wondered if he should be worried. “You’re looking green. Should I call Mom?”

Ethan held up his hands in surrender. “Okay, okay.”

“I’ve managed not to hurl in the last twenty minutes and I held down five saltine crackers, so I think I’ve turned the corner into the land of the living. And, you lucky bastard, do you know how many hot women always show up at these kinds of events?”

Ethan followed his brother into his spacious cathedral ceilinged living room. “Like I care about hot women.”

“You do. I don’t care what you say.” Dane slumped into his leather couch and wrapped a blanket around his shoulders. “Don’t let the penthouse suite go to waste. Take a little vacay.”

“Sure thing.” Ethan glanced around the opulence that was Dane Forrester, NHL superstar: granite countertops, stainless steel appliances, a fireplace, and a view of Cook Inlet that most people would kill for. Ethan was proud of him. If Dane was injured tomorrow and couldn’t play another game of hockey, he was set financially. He’d invested his money wisely and even though he’d missed those other charity events, Dane was beyond generous when it came to donating money to the causes he felt strongly about. “So where’s this costume?”

Dane pointed to the barstool. “Over there.”

Ethan pulled the costume over his black trousers and blue polo shirt. The gladiator-style helmet fit, but the plastic chain mail was loose. Walking back into the living room, he almost tripped over his cape.

Dane glanced up with a half grin. “Buddy, you might need to wear my shoulder pads under that. You know, to fill it out a little better.”

“Sure. I’m just giving you shit. You look exactly like me.”

Ethan shook his head. “Do your teammates know about your little sham?”

“Yes, if you run into any kind of trouble, you can count on Trent and Sven. They’ve got your back. Or my back. However you want to look at it.”

Ethan paced toward the front door already regretting his decision, but he was in too deep to back out now, and his brother really was sick. Dane would do the same for him if the circumstances were reversed.

Ethan stopped and turned around. “Yeah?”

“Remember you are
me
. If you don’t talk to any women, people will get suspicious. So at least say hello to a couple of them.”

“Just remember, little bro, you owe me big. I just haven’t decided how you’re going to pay up yet.”

Inside the Captain Cook hotel, Carly stood in front of the full-length bathroom mirror and gave herself a critical look. The white satin, white-fur trimmed bodice with attached wings really showed off her red hair, which could be a good or a bad thing, depending on how the night went.

The lace-up front worked like a Victorian bustier, showing a plentiful amount of cleavage, while the white leather mini-skirt hugged her hips and landed just above mid-thigh. The fishnet stockings added the perfect touch. She still couldn’t believe she was going through with this.

Silver gothic boots, halo, and a Venetian Bella mask completed her costume. She’d outdone herself. Or rather, her two fairy godmothers at the 5
th
Avenue mall had outdone themselves. She didn’t recognize the striking woman staring back at her.

Despite how fantastic she looked, her stomach still knotted up in a ball. She replayed the meeting with her new boss over again in her head. He’d said, “Dane Forrester is all the hockey world is talking about. Get the interview, get the story, or you’re done here.”