Read Melting Into You (Due South Book 2) Online

Melting Into You (Due South Book 2) 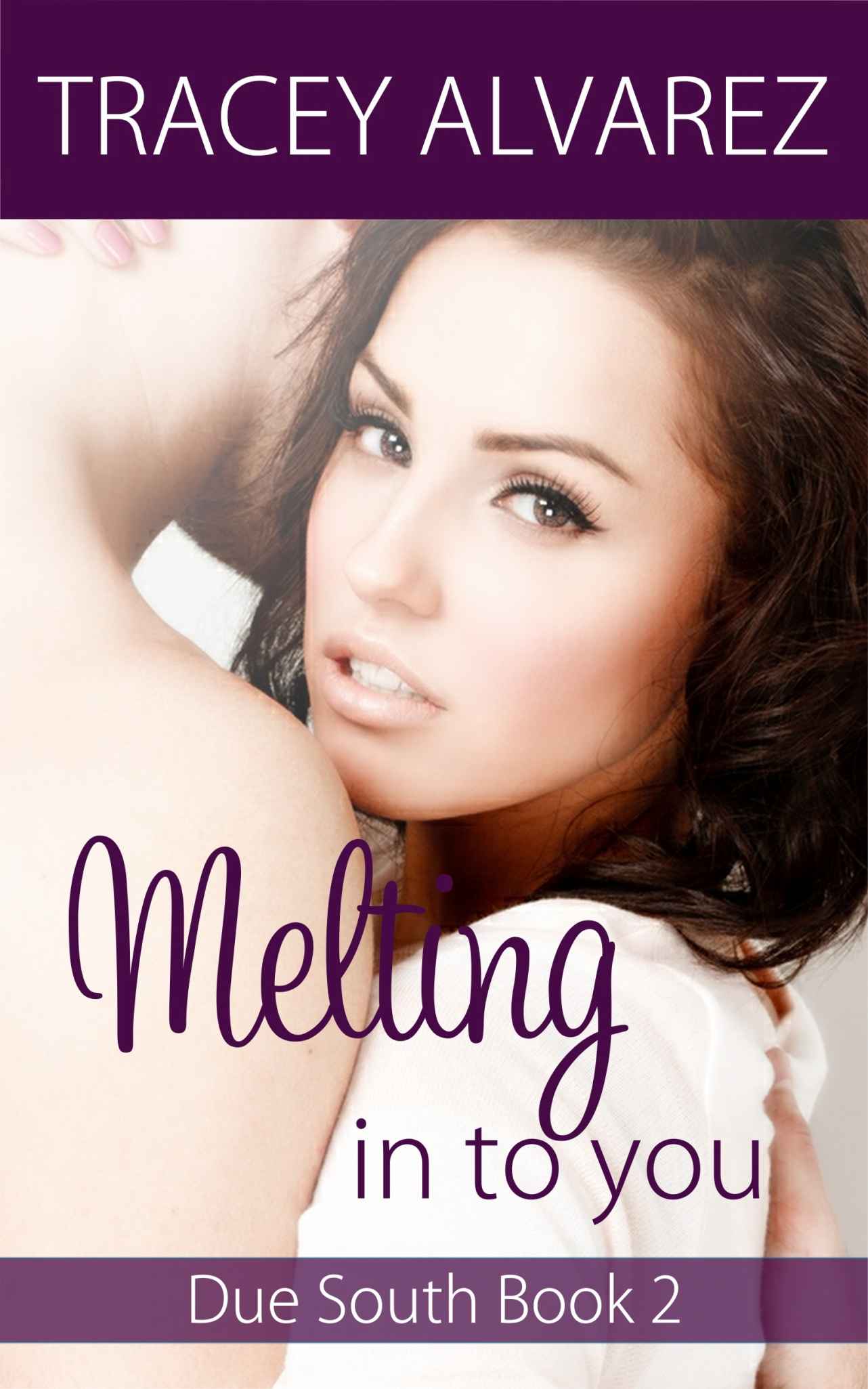 All rights reserved. No part of this publication may be reproduced, distributed or transmitted in any form or by any means, including photocopying, recording, or other electronic or mechanical methods, without the prior written permission of the publisher, except in the case of brief quotations embodied in critical reviews and certain other noncommercial uses permitted by copyright law. For permission requests, write to the publisher, addressed “Attention: Permissions Coordinator,” at the address below.

MORE FROM THIS AUTHOR

For the man who has loved me over half of my life. The one who always believed i
n me, right from the beginning, and on the days when I didn’t believe in myself.

I love you. To the moon and back.

Want to
keep up-to-date with new releases, special subscriber only promotions and other news/cool stuff?

Not an inspirational dream or a combination of fleeting images jumbled into meaningless nonsense, but a down and dirty, Technicolor extravaganza involving Stewart Island’s seriously hot widow, Kezia Murphy. She smacked a wooden ruler across his knuckles as he slid a hand up her skirt.

“Worth it, babe.” He rolled onto his side, dragging his pillow with him.

In his head, Kezia’s no-nonsense boss rapped on the classroom door shouting at Ben to keep his hands and mouth off Oban’s prettiest teacher. Damn busy-body, he hadn’t even tasted Kez, yet, and—

The rapping from his dream merged with banging on his front door, accompanied by the repeated
bzzzzt
of the doorbell. Ben groaned and opened his eyes, flinging an elbow over his face at the sunlight streaming through his bedroom windows.

Kezia. Off limits—since lusting after her broke his personal decree: Don’t mess around with local women and/or one of your sisters’ friends. Yet he couldn’t get her out of his mind.

He flipped over to check the alarm clock. Nearly eleven. Late, even by his standards. But with no shark cage tours booked, he deserved to sleep in.

T
he doorbell gave another blast.

With a last longing squint at his mattress, Ben rolled off his bed and shambled halfway across the wooden floor before a chill whisked over his bare skin.

Ben snatched yesterday’s jeans off the floor and yanked them on. Another flurry of knocks. Hell’s bells, what was their problem? Everyone knew everyone on New Zealand’s southernmost island, so why didn’t they just—

His shoulders hunched close to his ears. First job a
fter downing a gallon of coffee? Remove the doorbell’s batteries.

“The door’s unlocked. Just come in, for Pete’s sake,” he muttered, tugging a tee shirt over his head as he stepped out of his bedroom.

At the far end of the hall, a distinctively female figure stood outlined in his front door’s patterned glass, making no move to enter his house. The figure was too short for either of his sisters, and his mother would wear a red mini-skirt when a practical joker manhandled it onto her unconscious body. Kezia, she of the Mona-Lisa smile and wooden ruler, had a more conservative dress sense. And yeah, he’d noticed.

He zipped his jeans, checked the wall mirror and winced. Having nearly lost his diving business, he couldn’t afford to scare off customers. Fixing a welcoming smile on his face, he hustled down the hallway.

Ben opened the door to a blonde with a big fake smile and bigger, faker boobs. Boobs trapped in a half-unbuttoned white blouse that threatened mutiny under the weight of so much cleavage. She looked to be in her late twenties, with an upturned nose, blue eyes, and a curtain of long, straight, straw-colored hair.

He didn’t know her.

Or did he? Her slight nasal tone bristled along his nerve endings and tickled a vague memory. His smile flat lined.

The woman’s smile slipped at his silent regard and then grew wider. “Don’t you remember me, cutie? I’m Marci, Marci Roberts—well, Carter now.” She giggled, a shrill, twitter-y sound, snipped off when her teeth clamped down on her lower lip.

The name Marci Roberts didn’t jingle any warning bells, but the piercing giggle and “cutie” did. They jingled him back to his twenty-year-old self—back when he’d nail any willing woman.

For two nights they’d screwed like minks before she left for her home in—actually, he had no idea where she lived. He folded his arms. Why in God’
s name was she on his doorstep?

The woman pulled a ridiculously pouty duck face. “I was here on holiday with my girlfriends nine years ago—”

Ben attempted a
not at all impatient
smile. “Why are you here, Marci?”

Her blue eyes grew flinty and she sucked in a breath, which made her scary-ass boobs wobble. “Still not much of a conversationalist, I see.”

He shrugged. Why deny the truth?

She huffed, causing another boob wobble. “I’ll get to the point then. Jade?” She flicked her fingers at her side in a “come here” gesture.

Frost drifted down his spine. Jade? Her point was a semi-precious gemstone? What the—?

Ben stepped over the threshold. A little girl in a green dress and a pink backpack sat huddled on an over-turned suitcase in the corner of his front porch.
Her sandy hair—tinged with auburn—was pulled into two pigtails and her hazel eyes, the same color as his sister, Piper, locked onto his.

His heartbeat hit warp-speed as Marci impatiently extended a hand to the girl. “Jade. Come say hi to your daddy.”

Kezia stabbed her trowel around a stubborn weed and yanked until it slid from the soil. Autumn sunlight speared through the leaves of a bay tree in the corner of her front garden and dappled across the raised beds. This afternoon, she and Zoe would plant spring bulbs.

A miniature wilderness had surrounded their three-bedroom cottage when she arrived in Oban with her eight-year-old daughter last year. But during the summer school holidays, the two of them had tamed both the front and back yards. Come spring, they’d have neat rows of daffodils and jonquils to welcome the warmer weather.

She stood and stretched out her spine, glancing for about the sixtieth time up the road. Still no sign of them. Not that it was any of her business.

Thirty minutes ago, the blonde woman and little girl had stopped to ask for directions to Ben Harland’s house. Since her mamma raised no
idioti
, Kezia had pegged the child as Ben’s in three seconds. And since her housemate, Shaye—who happened to be Ben’s little sister—had never once mentioned a niece, someone could be in for a shocker of a morning. Unless Ben had kept secrets from his family? No…Shaye and Ben were tight.

So Ben was a daddy. Kezia shook her head. Ben knew kids like she knew car engines—which was to
say, not at all. Not judging, just an observation. She’d watched him all summer from her classroom window. His sisters had twisted his arm into coaching cricket after school. He’d never seemed relaxed with the kids, just kept them busy with the game. But he’d caught her eye more than once—out there on the field—running, batting…muscles flexing as he bowled to a student.

And…cutting off inappropriate thoughts now. Kezia crouched and plunged the trowel into the soil. Ben was not her type. Actually, she hadn’t had a type since Ca
llum died over four years ago. But if she did have a type? She sure wouldn’t go for men whose relationships didn’t last as long as the dairy products in her fridge.

“Mamma?” Zoe bounded around the side of their li
ttle cottage.

Kezia brushed her dirty hands on her apron. “Yes,
bella
?”

Her daughter ran to her side and Kezia kissed the girl’s mahogany curls.

Zoe tipped up her face, her dark-chocolate eyes sparkling. “Has the little girl come back yet?”

“Not yet. But remember, I said she might only be visiting for the day.”

Zoe raised her wrist and held her Hello Kitty watch under Kezia’s nose. “They can’t leave until the three o’clock ferry. That’s plenty of time for us to play—look. Here they come!”

Kezia hurried after her, but Zoe bulleted up the road. The blonde woman teetered down the hill toward them in cute but totally impractical red wedges that made Kezia’s rubber gardening booties look like clodhoppers.

Zoe bounced to a halt. “Where’s-your-little-girl-what’s-her-name-can-I-play-with-her-please?”

The woman stopped and shot Zoe a pinched smile.

“Hello again.” Kezia touched her daughter’s shou
lder, which trembled with bottled-up energy. “Sorry, we didn’t mean to ambush you, did we, Zoe?” She smiled at the woman. “You found Ben’s place okay?”

“Yes.” She smoothed out non-existent wrinkles in her hot-tamale skirt and glanced down the road at the cluster of buildings forming the tiny township.

“I’m Kezia Murphy, and this is my daughter, Zoe. We’re both friends of the Harland family.”

The woman’s gaze travelled from Kezia’s hair—which no doubt contained bits of fauna, snagged in her curls—to her dirt-smeared gardening clothes and rubber boots.

She dredged up a polite smile. “I’m Marci Carter, and my daughter’s name is Jade. She’s spending the school holidays with her dad, and I’m sure she’d love to play with you, sweetie.”

“Ben’s her daddy?” Zoe’s words came out in a high-pitched squeak. “And she’s staying for two whole weeks?”

A prickly knot formed in Kezia’s stomach. Suspicions confirmed. This Marci had slept with Ben, created a child with him. Shaye and Piper, her two best friends on the island, were the girl’s aunties. The family resemblance between them and little Jade was unmistakable.

And what did that prickly little knot mean?

Sensing the multitude of questions bubbling through her daughter’s veins, she tugged on one of Zoe’s corkscrew curls. “Bella, why don’t you let me talk to Jade’s mum about play dates?”

“Okay-okay. I’ll go tidy my room so Jade can come over.” Zoe flashed a quick grin, and then galloped along the road, disappearing through their garden gate.

Kezia turned back and modulated her voice to her professional, politically correct, teacher-dealing-with-parent tone. “This must be a very stressful situation for the three of you.”

Marci whipped out her cell from her tote bag and tapped the screen with one blood-red talon. She frowned at the phone then slipped it away again. “I thought it was time Jade got to meet her father and his family.”

Gatekeeper by Debra Glass
Moonlight on the Magic Flute: A Merlin Mission by Mary Pope Osborne
Closed Off To You (Singing Star Trilogy #1) by Rachel S. Rose
The Marines of Autumn: A Novel of the Korean War by James Brady
Saving Yesterday (TimeShifters Book 1) by Jess Evander, Jessica Keller
We Put the Baby in Sitter 2 by Cassandra Zara
Saddle Sore by Bonnie Bryant
One Night by Marsha Qualey
A Brief History of the Spy by Simpson, Paul
Comanche Moon by Virginia Brown