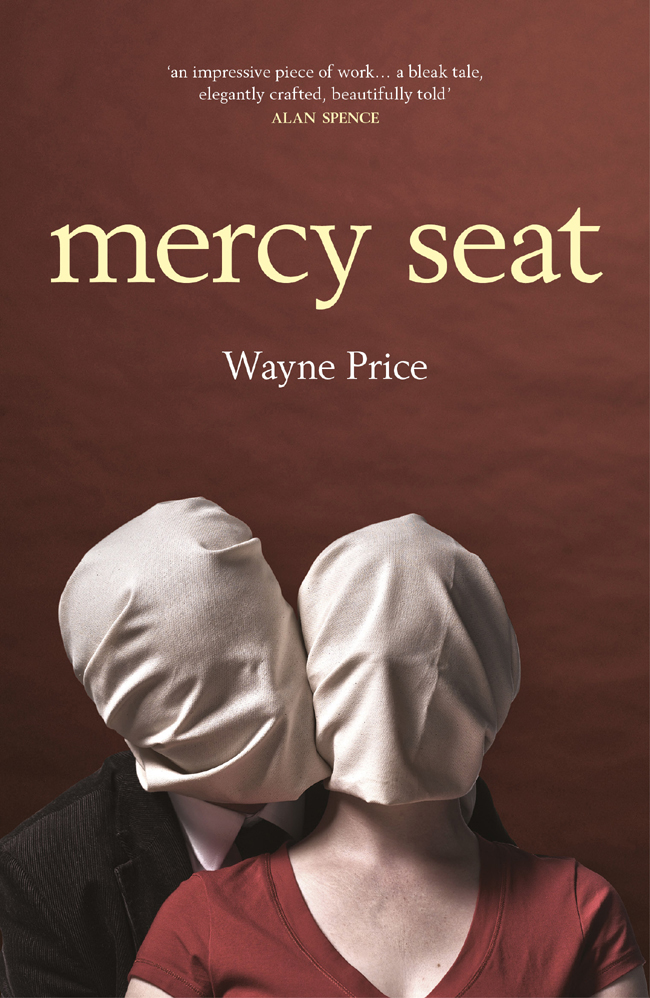 The moral right of Wayne Price to be identified as the author of this work has been asserted by him in accordance with the Copyright, Designs and Patents Act, 1988.

All rights reserved. No part of this publication may be reproduced or transmitted in any form by any means, electronic or mechanical, including photocopying, recording or any information storage or retrieval system, without either prior permission in writing from the publisher or by licence, permitting restricted copying. In the United Kingdom such licences are issued by the Copyright Licensing Agency, 90 Tottenham Court Road, London W1P 0LP.

A CIP catalogue reference for this book is available from the British Library.

Typeset by Freight in Plantin

Printed and bound by Bell and Bain, Glasgow

Wayne Price was born in south Wales but has lived and worked in Scotland since 1987. His short stories and poems have been widely published and have won many awards. His debut story collection,
Furnace
, published by Freight in 2012, was shortlisted for the Saltire Scottish First Book of the Year and longlisted for the Frank O'Connor International Short Story Award. He teaches at the University of Aberdeen.
Mercy Seat
is his first novel.

Did it wait, this mood, to mature with hindsight?

In a trance from the beginning, then as now
.

I think now, nearly thirty years too late, that Christine came to us that summer not meaning to shipwreck our lives, at least not to begin with, but just to save herself somehow. Like the swimmer she was, and too far out from land, she knew she had to find something to take hold of, or drown.

For a long time I'd assumed that if there'd been any meaning at all in what happened that August, then it was something to do with control and revenge; something primitive in both Christine and me, and in Jenny too, by the end. I'm ashamed about the pettiness of those thoughts now, but maybe it's impossible to understand certain things without the years, and all their losses, to teach us. Maybe any kind of cruelty comes from simple need, and we could see it properly if we could step through its mirror, the looking-glass that only ever shows ourselves. But back then in the midst of it I was young, and dazed with responsibilities â marriage, and fatherhood â that had come too soon. I was staring out at the world as if I'd woken in a small room that wasn't my own, in a strange land, and I understood so little of what I was seeing. Maybe nothing at all.

I came to this little town by the sea as randomly as driftwood. Though I'd been bright at school, and spent most of my childhood steeped in books, I'd left at sixteen to take up an electrician's apprenticeship at the Lady
Windsor, one of the Cynon Valley collieries. It didn't take much time for me to feel that I'd escaped one prison for another, and when the long strike began a year later and I joined the pickets at the gates it felt, secretly, like a miraculous reprieve. Looking at the grim faces of the older men around me as they passed the long empty hours with gossip, politics, rugby talk and despair for the future if the strike wasn't won by Christmas, I felt almost drunk with a guilty, fugitive lightness I'd never felt before except in books and dreams, and which I sometimes think I've spent the rest of my life trying to recapture.

When the union asked for volunteers to strengthen the picket at Cynheidre Colliery in Carmarthenshire, the westernmost pit in the south Wales coalfield, I made sure to sign up. On a wet Monday morning, sometime in October, I sat with a dozen other men squeezed tight against the window of a steamy, leaking, smoke-filled minibus and imagined that all the grey spiders' nests of the valleys towns we crawled through â Porth, Ton Pentre, Treorchy â were unravelling behind us like traps of dirty silk, dissolving in the rain.

Not many weeks later I packed as much as I thought I needed to take, left a note filled with words I can't begin to remember, and rode a slow train from Cardiff to Carmarthen. I stayed a while, working and shivering through the winter on a building site, and when that job was done I carried on west until I reached the sea. I've hardly been back to the valleys since, except twice to see each of my grandparents buried, six months apart. They'd raised me since I was eleven.

That was my first betrayal I suppose, though I didn't
see it that way at the time. Part of me believed I'd be back, like a prodigal, maybe as soon as Christmas, or with the spring. It wasn't as if they'd caused me any unhappiness. In fact, for the first few years after my mother's death my grandfather was by far the most important person in my life, and they both did their best for me in their strict but kindly Baptist chapel way. Until the long, inward solitary confinement of adolescence took hold of me I even shared in my grandfather's enthusiasms. He read and passed on to me an endless stream of Westerns, dog-eared paperbacks from the local library, filled with prairie sunsets, blood-feuds and solitary Texas Rangers. Until my early teens I could lose myself utterly in them, and lived their simple dramas out in almost every daydream. The plots were as linear and satisfying as the dusty trails the white-hatted rangers followed, tracking down every kind of lawlessness to Indian camps, ghost towns, Mexican deserts, the dazzling snows of the High Sierra.

On Saturdays he took me to the matinees at the Workmen's Hall. The steep, claustrophobic little cinema, blanketed in a permanent smog of cigarette smoke, dust and the smell of mothballs, was set up on those mornings purely for an audience of retired or invalided miners. Ancient Mrs Protheroe, who'd lived just a few doors up from my mother and me when I was small, tottered about as the usher and made sure no teenagers slipped in to make use of the darkness at the back. Monday nights it was all theirs, but the Saturday matinees were sacrosanct and the place was a fuggy temple of hacking coughs, old men's muttered greetings, and 1940s Americana â a double bill of Roy Rogers and Clayton Moore as The Lone Ranger if we were lucky, or The Three Stooges, or Abbott and
Costello. I remember we both despised any love interest, any sentimental complication. My grandfather would let out a soft, but quite audible angina moan that always sounded strangely private to me, as if it came from behind the door of a locked toilet cubicle. He would shift a little in his seat and I would stare at my knees and fill my head with other, manly thoughts until the embarrassment was over. Actually, not just embarrassment. It was a kind of physical dread. It gripped my throat and sometimes made me want to run from the cinema, though it pinned me helpless in my seat. A slow kiss or confession of love on that big, glowing screen would disturb me more than any kind of cliff-hanger or violence, and I could never bear to witness it.

One summer holiday I devoted several days to memorising the Lone Ranger's Moral Code, then greatly pleased my grandfather by being able to recite it to him like a catechism. Most of it has crumbled from my mind now, but I still recall the first of them:
To have a friend, a man must be one
. And the precept that puzzled me most and haunted me as a boy:
Sooner or laterâ¦ somewhereâ¦ somehowâ¦ we must settle with the world and make payment for what we have taken
.

He introduced me to music, too â my grandfather I mean, though his and the Lone Ranger's tastes might well have coincided. His great favourites were Hank Williams and Jimmie Rodgers â tough, doomed country kids who would have been the same ripe old age as him if they hadn't burned themselves through and died young, decades before that kind of waste became so fashionable in my own world. Their scrubbed, narrow faces stared out from the well-thumbed album covers at me as my grandfather
read, for the thousandth time, the liner notes on the backs. I could probably still sing along to âRamblin' Man', âPrairie Lullaby', and âI'm So Lonesome I Could Die'.

As I grew into my teens I began avoiding our Saturday rituals (the same way, a few years earlier, I'd begun to find excuses for missing chapel services on Sundays and Prayer Meeting on Thursdays), preferring to hide away in my back bedroom with a record player, and records, of my own. It wounded him a little to begin with, I think, but he was wise enough not to fight it or mock my new obsessions. They were already twenty years out of date, but seemed dizzyingly prescient to me: Dylan, of course, Joni Mitchell, Hendrix, Cohen and Neil Young; and then, following their clues, the second-hand Sun Records I scrabbled for like a prospector at the backs of musty enthusiast shops. As soon as I began earning a little money of my own from paper rounds I'd catch a bus and a train to Cardiff one Saturday a month and walk a circuit of them all, those secretive little import and bootleg record stores that seem to have almost vanished from the earth now. I'd trudge miles between them, in sunshine or rain, from the back streets of Canton and Cathays to the winding city centre arcades. And then finding the old Blues men in those same plywood racks: Blind Willie Johnson growling âJohn the Revelator', Memphis Slim, Champion Jack Dupree. For years in my teens those voices, crackling like messages from another planet through my boxy Philips stereo, were all I wanted in the endless evenings for company.

When I left my grandparents' house I left music behind, too. I had no practical way of taking it with me, for one thing, but more than that I lost any sense of need for it,
and that feeling has stayed with me ever since. I stopped looking for myself in songs the same way I stopped looking for myself in the Lone Ranger's code, or my grandmother's bible stories. Even a jukebox in a bar, if it plays a song I remember, can make me feel suddenly sick with impatience, anxious to be gone, like being persuaded too insistently about something you already, long ago and irrevocably, had decided.

It was a local man â one of the younger farmers I sometimes fell in with at the beach front bars, down from the fields on a one-night tear â who told me about Pugh's farm at Fynnon-wen, high up in the Rheidol hills. One of the two middle-aged sons had hanged himself in the barn, just a month before, he said. There was work on the place for sure, he reckoned, if I could get along with that mad old bugger Pugh â a long-time widower â which he doubted. He laughed as he said it, but I wrote down the directions, and his name as a kind of reference.

The Passion of Mademoiselle S. by Jean-Yves Berthault
Alex by Pierre Lemaitre
A Bride for Keeps by Melissa Jagears
Yours for the Taking by Robin Kaye
The Affair of the Mutilated Mink by James Anderson
Fly Frenzy by Ali Sparkes
Home For Christmas (A Copper Mountain Christmas) by McClone, Melissa
Twice in a Blue Moon by Laura Drake
Jane Bonander by Winter Heart
A Spot of Bother by Mark Haddon