Read Miriam and the Stranger Online

Miriam and the Stranger 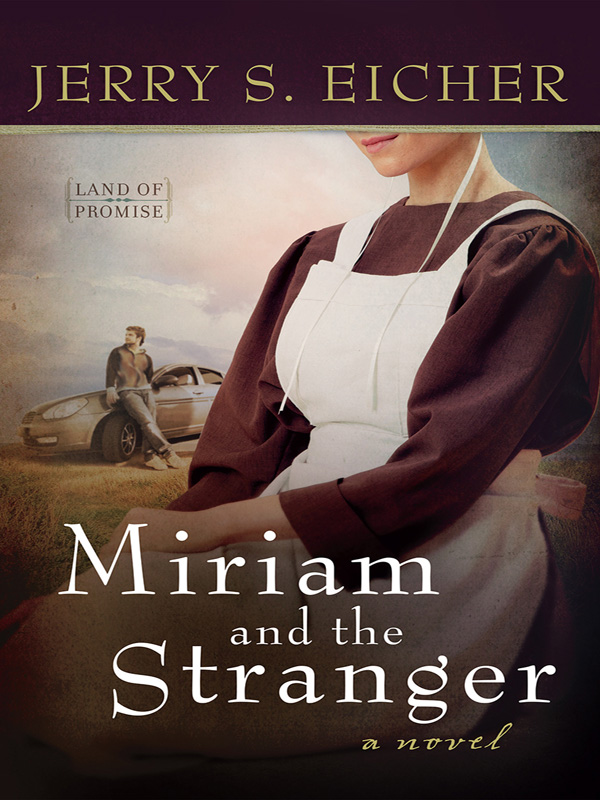 Miriam Yoder is living a happy life as the beloved school teacher in the small Clarita, Oklahoma Amish community having accepted the fact that she will likely never marry. But when a local freelance reporter enters her world, Miriam is astonished to find herself attracted to the handsome
Englisha
man.

The very next week, widower Mose Stoll arrives from her home community of Possum Valley, Ohio, in search of a second
frau
. Mose has spoken with Miriam's father and is ready to meet Miriam in person. If he finds no serious flaw in Miriam, Mose plans to marry her and take her home to Possum Valley.

When Miriam follows her heart instead of her head, she finds herself facing excommunication. Suddenly her happy life has been turned upside down with no possible solution...unless God intervenes.

Jerry Eicher's many fans (more than 600,000 books sold) will delight in this concluding volume in his Land of Promise series.

Book three in the Land of Promise series

A Dream for Hannah

A Hope for Hannah

A Baby for Hannah

A Wedding Quilt for Ella

A Blessing for Miriam

Miriam and the Stranger

All Scripture quotations are taken from the King James Version of the Bible.

MIRIAM AND THE STRANGER

All rights reserved.
No part of this electronic publication may be reproduced, stored in a retrieval system, distributed, or transmitted in any form or by any means—electronic, mechanical, digital, photocopy, recording, or any other—without the prior written permission of the publisher. The authorized purchaser has been granted a nontransferable, nonexclusive, and noncommercial right to access and view this electronic publication, and purchaser agrees to do so only in accordance with the terms of use under which it was purchased or transmitted. Participation in or encouragement of piracy of copyrighted materials in violation of author’s and publisher’s rights is strictly prohibited.

Other Books in the Land of Promise Series

M
iriam Yoder opened the schoolhouse door and looked across the ball diamond where only a couple of hours ago the children had played softball at recess. The sunbathed, open Oklahoma landscape stretched off into the horizon. Miriam paused with her hand on the doorknob. This little one-room schoolhouse had been hers for the past two years. She was the teacher, and the Clarita Amish community had become home to her. Here she had found a land of promise in which to heal and to grow after the tragedy of her beloved Wayne’s death—even if that now meant she might have to walk alone as a single woman for the rest of her life.

A smile filled Miriam’s face when Star’s whinny from the small weather shelter broke into her thoughts.

Star tossed his head as if he understood, and Miriam closed the schoolhouse door behind her. Aunt Fannie would have supper on
the table by now. She shouldn’t have worked so late, but at least she had managed to finish correcting the last of the arithmetic tests. Tomorrow the scholars would be happy with their grades. Her entire third-grade class of four students had received scores above ninety, which was an accomplishment after last year when all four had struggled so hard. She had spent time this term with the students whenever there had been a spare moment. The other grades also needed a fair share of her attention, but the extra effort with the third-graders had paid off. Their faces would glow with happiness when she told them the news, and further joy would fill her own heart. Her fourth teaching term had begun this fall, and what grace the Lord had granted her that she could play even a small part in the development of these precious children’s lives. The Lord had surely been with her since Wayne’s passing during that awful tornado.

Star lifted his head as Miriam approached, and she rubbed his nose. The white mark on his forehead was highlighted in the soft afternoon sunlight. Miriam traced the outline of the imprint while Star held his head perfectly still, fully enjoying the attention.

“The Lord has guided me well these past years,” Miriam whispered to him. “And this is one of my signs that the way was opened by His hand. You are my Star.” Miriam brushed the silky hair on his neck.

Agent finds a Warrior by Guy Stanton III
Kingdom of the Seven by Jon Land
Pyro by Earl Emerson
Legacy by Jayne Olorunda
Some Enchanted Season by Marilyn Pappano
Second Night by Gabriel J Klein
A Lot Like Love by Julie James
Lone Wolf by Robert Muchamore
Someone Else's Fairytale by E.M. Tippetts
The Offering by McCleen, Grace