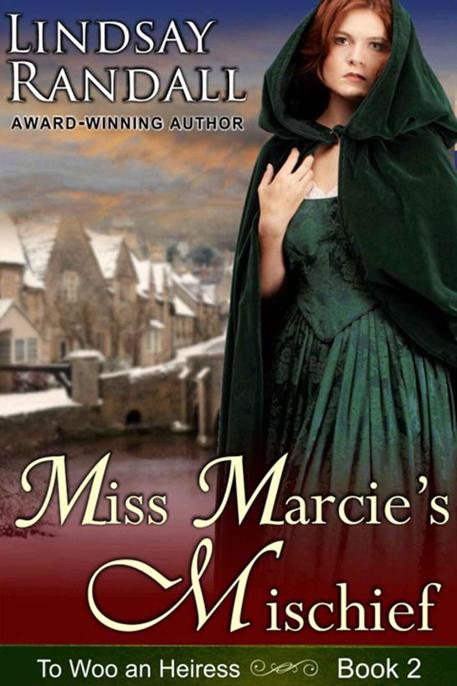 To Woo an Heiress

By payment of required fees, you have been granted the
non
-exclusive,
non
-transferable right to access and read the text of this eBook. No part of this text may be reproduced, transmitted, downloaded, decompiled, reverse engineered, or stored in or introduced into any information storage and retrieval system, in any form or by any means, whether electronic or mechanical, now known or hereinafter invented without the express written permission of copyright owner.

This is a work of fiction. Names, characters, places, and incidents either are the product of the author's imagination or are used fictitiously, and any resemblance to actual persons, living or dead, business establishments, events or locales is entirely coincidental.

The reverse engineering, uploading, and/or distributing of this eBook via the internet or via any other means without the permission of the copyright owner is illegal and punishable by law. Please purchase only authorized electronic editions, and do not participate in or encourage electronic piracy of copyrighted materials. Your support of the author's rights is appreciated.

Unfortunately, Marcie had no "special other," no potential suitor with whom she could look forward to a day of merrymaking, a day for hiding a gilt-edged heart made by her own hands and intended for her chosen gentleman to find.

There would not be a posy of flowers left on her doorstep by an anonymous admirer, no loving Valentine verse, and certainly no waltzing within a man's warm embrace at a Valentine's Day ball for Marcie.

It saddened her to think of the old saying that whichever gentleman a young woman spied first on Saint Valentine's Day would become her groom before a year had passed. At the moment, Marcie stood alone amid a wintry world. Soon it would be midnight, yet Saint Valentine's Day might as well be a world away from her, Marcie thought miserably.

Though late of St. Ives and much accustomed to the cold and the wet, Marcie found herself in high fidgets as she stood shivering in the snowfall and awaiting her ride out of London Town. She was, after all, running away from boarding school. The fact that her hired carriage was dreadfully late did not sit well with the eager-to-be-gone Miss Marcie.

Saddened by the approaching day intended for love and lovers, she drew her fur-lined pelisse more closely about her and swore soundly as though she'd had not a whit of schooling under the stern Betina Cheltenham.

Somewhere, a church clock struck the midnight hour. Where the devil was the conveyance her good friend Nan Farthington had promised would come?

Marcie didn't fear the high-and-mighty Mistress Cheltenham's sense of outrage should the old bat discover Marcie's plot to be free; she feared the woman's switch! Marcie had had the back of her hands stung by Mistress Cheltenham's switch too many times to count. The last flick of that horrible stick had been because Marcie had not properly executed the precise procedure in eating an artichoke.

Artichokes. What a perfectly senseless waste of time in even bothering with them. Marcie hated artichokes perhaps more than she despised Mistress Cheltenham's rule. Marcie had suffered the old hen's horridness only because traveling to London and enrolling in Mistress Cheltenham's School for Young Ladies had been the final request of Marcie's dear beloved father who had snapped his foolish but lovable neck when he'd toppled from his horse. He'd just celebrated his sixtieth birthday—and Marcie her seventeenth—on the day he decided he could still ride with the best of the young horsemen.

Marcie's grief at her father's passing knew no bounds, and surely it had been profound sadness that propelled her to do precisely as her father had wished. She'd dutifully come to London and unpacked her trunks in Betina Cheltenham's drafty attic room, determined to mold herself into the fine lady her father had longed for her to become.

But life within Mistress Cheltenham's crumbling walls was surely a fate worse than death. Marcie's spoilt schoolmates looked down their prettily upturned noses at her, viewing her as naught but a wild West Country girl who would never achieve the genteel manners necessary to catching the interest of a fine man. As for Betina Cheltenham, the woman had immediately tried to crush Marcie's inherent sense of adventure and fun. Mistress Cheltenham and Marcie locked horns from the moment they'd met.

Betina preferred teaching the daughters of those Cits who weren't as wild as Marcie's father had been. Betina preferred her charges to be like porcelain dolls, and she'd gotten her wish. All of Mistress Cheltenham's students, save Marcie, had been fashioned to be helpless, pretty, and as far as Marcie was concerned, proved to be oftentimes deucedly temperamental.

Marcie, however, was neither spoilt nor demanding. She was her own person, and she was as lively as the day was long.

For Marcie, the supreme idea of fleeing the boarding school to the safety of her godmother's home in the north had seemed a simple and very smart thing to do only a few hours past. But that had been before the snow began coming down in heavy, pristine flakes that chilled to the bone. Not even Marcie's ermine tippet could keep her fingers warm now.

All her other schoolmates had been whisked away from the school by loving family members who promised their cherished daughters sweet Valentine buns to eat, time enough to carve hearts from paper and embellish them with lace and verses and, no doubt, expensive bottles of perfume with which to scent those same hearts. There would be late-night banquets for her schoolmates to enjoy, and dancing until the wee hours of the morning.

For Marcie, though, there would be too little merriment this Saint Valentine's Day. Her dear father was dead, leaving only his vast monetary holdings in his wake. Marcie's mother had died in childbirth when Marcie was but five years old. She had no siblings. All the family left to her were two girl cousins—the lovely Meredith and the independent Mirabella—both of whom had written to Marcie begging her to join them for Saint Valentine's Day in the Cotswolds, and both of whom she hadn't seen in years.