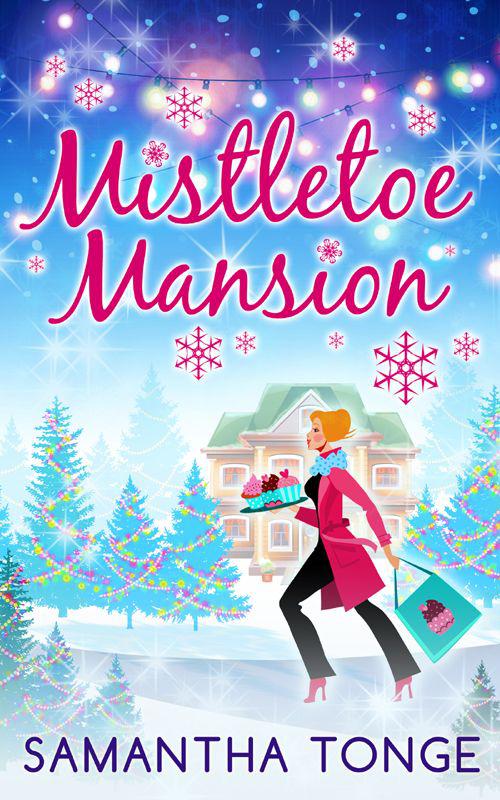 When Kimmy’s Sensible Boyfriend told her he didn’t approve of her longing for the high life or her dream of starting a cupcake company Kimmy thought she could compromise – after all, she did return those five-inch Paris Hilton heels! But asking her to trade in cake-making for a job sorting potatoes is a step too far.

So, newly single - and newly homeless – Kimmy needs a dusting of Christmas luck. And, masquerading as a professional house sitter, her new temporary home is the stunning Mistletoe Mansion. Soon she’s best buds with glamorous next door golf WAG Melissa, and orders are pouring in for her fabulous Merry Berry cupcakes! The only thorn in her side is handsome handyman Luke, a distraction she definitely doesn’t need. And talking of distractions, something very odd is going on at night…

Kimmy is finally living the life she’s always wanted. But will her glimpse into the glittering lifestyle of the rich and famous be as glamorous as she’s always imagined…?

From Paris with Love

lives in Cheshire with her lovely family and two cats who think they are dogs. Along with writing, her days are spent cycling, willing cakes to rise and avoiding housework. A love of fiction developed as a child, when she was known for reading Enid Blyton books in the bath. A desire to write bubbled away in the background whilst she pursued other careers, including a fun stint working at Disneyland Paris. Formally trained as a linguist, Samantha now likes nothing more than holing herself up in the spare room, in front of the keyboard. Writing romantic comedy novels is her passion.

Massive thanks to my great editor Lucy Gilmour and the wonderful CarinaUK team for their excellent input, dedication and super covers. Plus thanks to my agent, Kate Nash, for her continual support.

Fellow Carina authors, you are the best and keep me sane. And Pink Ink blog gals, I couldn’t manage without our hilarious chats.

I’m constantly bowled over by the support from chicklit bloggers and reviewers – your effort and time is much appreciated, with a special mention to Robyn Koshel from Elder Park Book Reviews and Tay from Chicks That Read. Plus thank you to those readers who’ve let me know how much my books have made you laugh – because that’s why I’m in this writing business, to raise a smile (and have an excuse to go on Facebook and eat chocolate all day long

Thanks to Jo Hoddes, founder of the fabulously, affordable online clothes shop Bae Boutique, (
http://bae.boutique/
), for her support in launching Mistletoe Mansion, a story which features the glamorous lifestyle her customers no doubt aspire to.

Martin, Immy and Jay, I so appreciate your regular injections of perspective and confidence. You three guys make every day seem like Christmas.

For Martin, Spencer and Dad – ha’way the golfing lads!

‘Move your legs further apart. Tilt forward from the waist. Rock your hips in a rhythmic motion… Nice, gently does it. Now keep that stroke light. We don’t want a premature start. Remember what I said about balls…’

‘Keep your eye on them,’ I whispered back to the silky voice coming from the television. My jogging trousers slipped beneath my stomach as I swung my golf club (okay, broom handle). Having just chipped out of three virtual bunkers, I was practising my putting before re-doing the energetic teeing-off section.

‘You still not finished, Kimmy?’ asked Adam, as he came out of the bedroom, in T-shirt and boxers.

I smiled. Would the day ever come when I got tired of admiring his rock solid quads (thigh muscles to you and me)? They were like the physical representation of his personality – solid, secure, strong…

‘I thought you were meeting Jess for coffee.’

‘Almost done,’ I said. It had been no mean feat to follow my new exercise DVD without taking a chunk of plaster out of the ceiling or knocking a bauble off our bargain-priced Christmas tree. Indoor golf wasn’t the best hobby if you lived in a one-bedroom flat where you couldn’t swing a cat, let alone a four foot broom.

He rolled his eyes without their usual twinkle. In fact, he’d been low in the sparkle department for several days, now.

‘What?’ I stopped, secretly grateful for the break. Golf may be awesome for toning bingo wings but my back ached as if I’d played eighteen holes up Ben Nevis.

‘You already had that DVD by the bird off Strictly Come Dancing,’ said Adam. ‘Why buy this one? You should go to the gym, like me. It’d save you a bundle of money in the long run.’

I gazed back at the screen. Just as well he’d forgotten the DVD I’d bought by the winners of Britain’s Got Talent. Then there was the Hotpants Workout and the Bootcamp Bum-buster. Starchat magazine had recommended Melissa Winsford’s; said it would give me “the celebrity body of my dreams”.

I sighed. Her voice was all velvety and smooth, as if she lived on nothing but marshmallows and hot chocolate. With her firm boobs and flat tum, she was one of the most glamorous “Wags” (
W
ives
a
nd
g
irlfriends for those who don’t know). Oops, better make that “
birdies
”. Apparently Melissa hated it when “classy” golf was associated with “thuggish” football terms.

‘Give me a few minutes and I’ll make pancakes,’ I said hoping this might raise, if nothing else, a nod of appreciation. Our usual Saturday morning ritual was a late-morning cuddle to my Hits for Lovers CD, followed by pancakes and syrup. Except today I was meeting my best mate, to indulge in festive flavoured lattes at our favourite coffee shop. And in any case, Adam hadn’t been interested when I’d rolled over close for a quick snuggle-up. In fact he’d been moody all week and I don’t mean in a sexy Marlon Brando way.

‘You okay?’ I sat down beside him, on the sofa, stomach pinching a little at the empty expression on his face. ‘You’ve had a hard week. Let me give you a massage.’

At that moment the doorbell rang. I looked at the clock. Of course! Postie! I dashed to the kitchen worktop and grabbed a Tupperware box. It contained six rich brown cupcakes topped with dark butter icing and swirls of red and green cake glitter.

‘Morning, Matt.’ I grinned at his lopsided cycling hat and passed him the box. ‘Hope everything works out,’ I whispered.

‘Thanks, Kimmy,’ he said and in return handed me a brown envelope and some junk mail. He prised open the plastic box’s lid. ‘They look ace. Cool Christmas colours, as well. How much do I owe you?’

‘Think of them as an anniversary gift.’

‘What was that all about?’ asked Adam, in a flat voice, as I closed the door. ‘How come you’re so friendly with the postman?’

‘I’m on first name terms with a lot of people, since losing my job and working random temporary hours – including Dave, the window cleaner, and Sanjay who reads the gas meter.’ I sat down again. ‘Postie and his wife have been having problems. He almost moved out last month. Tonight he’s cooking a special meal. I offered to provide a dessert that would give them a bit of, um, oomph.’

‘Sweet basil – it’s an aphrodisiac. I disguised its taste with fresh mint which doubles as the perfect breath freshener. After a couple of those cupcakes, she’ll think he’s got the moves of Patrick Swayze in Dirty Dancing.’

Was Adam even listening? He stared at the brown envelope and didn’t even reach out for the junk mail, to flick through for money-off coupons.

‘Hungry?’ I put the envelope to one side. I had to meet Jess in one hour.

‘Aren’t you going to open it, Kimmy?’ he said, in tight tones.

‘That envelope. It could be important.’

He was right. Perhaps it was a bill and unlike Mum, I didn’t stash my mail, unopened, into the nearest drawer. I flicked off the telly before leaning back against the beige throw. I ran my acrylic nail along the seal and tugged out a document. Maybe I’d won that competition I’d entered last month for a Hollywood makeover. I sighed. No such luck. It was an application form.

‘Why didn’t you just bring this home with you?’ I left it on the sofa, stood up and walked a few steps over to the open-plan kitchen.

‘Work has procedures. Plus there’s been a freeze on recruitment. I just left your name with the personnel woman last week and crossed my fingers. I can’t believe your luck.’ A sparkle actually returned to his eyes.

‘You want me to work full time at CountryHouse Potatoes? But I thought we’d agreed – I’d temp until the
right
job came along. Can you really see
me
sorting spuds?’

‘Why not?’ he asked and raised both eyebrows.

Good question. CountryHouse Potatoes
was
a great employer. The pay wasn’t bad, and from what Adam said, the staff canteen food was yummy. If the position was temporary, I’d have already been at the post box.

‘I’m, um, used to working with pretty silver sugar balls and candied roses.’ I smiled. ‘Your average potato is uglier than my bunion.’

‘Ha, ha. Come on, Kimmy. It’s in catering. Put your mind to it and you could be supervisor in half the time I took. All this time you’ve spent at Best Buns bakery, with no chance of moving forward… If you forgot this mad cake-making idea of yours, you could be earning real money, getting promoted…’ His voice sounded even more animated than when he watched football.

‘But I’m going down to the job centre again on Monday.’ I opened one of the rickety cupboards and took out a pan. It was
not
a mad idea. Even the psychic I’d visited at the local Easter Fair said I was “born to bake”.

A Man of Forty by Gerald Bullet
The Best Is Yet to Come: Novella Bonus for Her Best Match (The Best Girls Book 0) by Tamie Dearen
The Club by Yvette Hines
I So Don't Do Famous by Barrie Summy
Fancy Dancer by Fern Michaels
Margaritas & Murder by Jessica Fletcher
Dirty Little Lies by James, Clare
Nothing Left To Want by Kathleen McKenna
Possession in Death by J. D. Robb
Cross Country by James Patterson