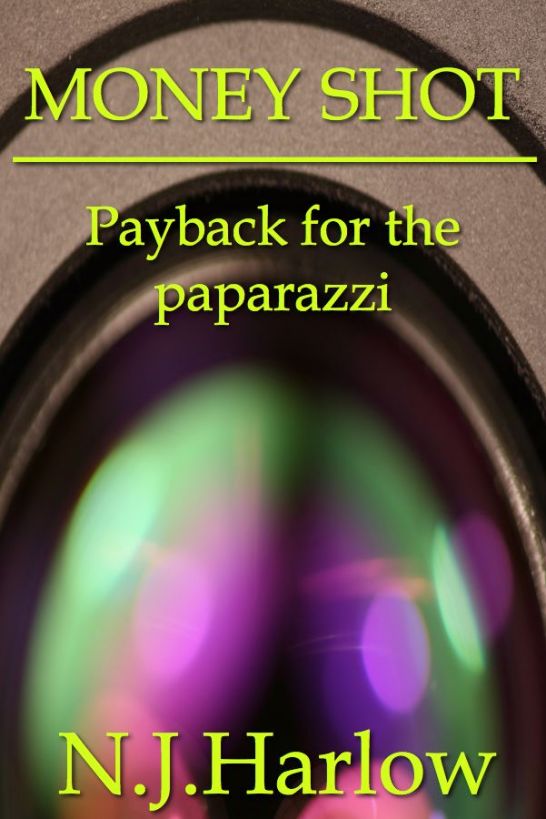 This ebook is licensed for your personal
enjoyment only. This ebook may not be re-sold or given away to
other people. If you would like to share this book with another
person, please purchase an additional copy for each person. If
you're reading this book and did not purchase it, or it was not
purchased for your use only, then please return to Smashwords.com
and purchase your own copy. Thank you for respecting the hard work
of this author.

The Vulture, a/k/a 'Razzi
Rizzo, real name Roxanne Rizzo, furiously flapped her wings as she
prepared to bolt from the hovel known in some circles as an
apartment. The Vulture sharpened her talons as she shoved a dozen
assorted lenses into her canvas bag like she was stabbing it. Being
a lens mule was a necessary evil when you're a paparazzi; you never
know what the situation will be when the money shot jumps out and
says, "Cheese!"

And it's called a money
shot for a reason.

Her stomach growled and
she decided to expend fifteen seconds for breakfast. The Vulture
ran to the kitchen, grabbed a box of Count Chocula (the preferred
brand of choice for those who mainlined sugar), tipped it so she
got a mouthful, then opened the avocado green Frigidaire. She
turned her head as she caught a whiff of a lab experiment formerly
known as pizza, grabbed a milk bottle, and took a swig. Half of the
milk and cereal ended up on her denim vest and down the legs of her
black jeans; she looked like a white trash toddler at Wal-Mart but
didn't give a damn. She forgotten to buy energy bars and didn't
have time for anything else.

She had to
move.

Or the road kill would be
gone.

She was at Defcon One
because Hollywood icon Desmona Jackson, wearer of the Manolo
Blahnik line of goody-two-shoes and thumper of every Bible in every
hotel suite in the world, had gotten seriously shit-faced and
started an actual honest-to-goodness food fight at an exclusive
restaurant, featuring everything from soup to crème brulee, and
been hauled off to the slammer by Beverly Hills' finest.

And The Vulture wanted her
for lunch. Her deep brown eyes smoldered as she licked her
lips.

The news had broken a few
hours ago, so Joe and Mabel Sixpack in Upper Buttcrack, Arkansas
desperately wanted to see Hollywood's pure-as-the-driven-snow
sweetheart with a few hairs out of place and those that were in
place covered in arugula and caviar. They wanted pictures
now
. And they'd all pay
two bucks in the supermarket line and let their kids eat knockoff
Oreos for a week in order to see them.

This was no time for
photoshop.

This was the Holy Grail
for a paparazzi.

She swallowed her
breakfast, such as it was, grabbed her gear and sunglasses and
headed out the door.

If The Vulture picked
Desmona Jackson clean it would pay the rent for God knew how
long.

If not, the vampire on the
cereal box would be her best friend again tomorrow.

"What in the
hell
were you
thinking?"

Desmona Jackson considered
the question from her agent, Nicole Wine, and looked away. Between
Nicole's lecture and the Chinese gong orchestra that was
playing
Flight of the Bumblebee
in her head, she just wanted to be magically
whisked back to her compound and go to sleep like the fairytale
characters she played.

"Have you
seen
the mug shot?"
asked Nicole, clicking her heels as she paced around the tiny dim
room.

Desmona bit her lower lip
and dropped her head, almost hitting the steel gray table in the
interrogation room the police were letting them use. Her mahogany
tangles fell into her porcelain face, hiding the famous cheekbones
and to die for coffee-with-a-little-cream eyes. She leaned back,
stretched out the long, well-toned legs of her five foot ten inch
frame, and turned into a little girl. Despite the no-smoking rule,
the room smelled as though nicotine was part of the faded gray
wallpaper and made her feel dirty. "What do I do,
Nikki?"

Nicole ran her hand over
the straight honey blonde hair that dusted the shoulders of her red
jacket. She continued pacing, a petite, taut bundle of energy that
became a caged animal in a crisis. She snapped her fingers over and
over as her ice blue eyes searched the heavens for an answer. "We
need damage control, big time, Des. The piranha are already
circling and you've just dumped a bucket of blood in the water.
What did you expect?"

Desmona buried her head in
her hands. "Fine, whatever. How much?"

"To make this all go away.
How much will it cost? Ballpark. You know what? I don't care. Just
write the damn check."

Nicole pulled out a chair
and sat down opposite her. She reached across the table and lifted
Desmona's chin so that it was facing hers. The ice blues turned
soft as her hands. "I don't think I can make it go away, Des.
You're too big. You
are
Hollywood."

"You can spin anything,
Nikki. You did it for Roddy O'Hara last summer."

"Roddy already had a
reputation and a police record going back twenty years. You're Snow
White and Cinderella wrapped into one. You make Marie Osmond look
like a slut. No amount of money is going to buy people off this
one. You know the rule; Hollywood worships success but roots for
failure. And no one can fall farther in this town than you right
now. You may as well be the New Year's Eve ball in Times
Square."

Desmona wiped a tear from
her eye. "Just spin it, Nikki. Tell them I had an allergic reaction
to some medication when I drank a glass of wine."

Nicole rolled her eyes.
"Yeah, that's original. They'll buy that. Side effects include,
nausea, vomiting, and firing miniature quiches like Nolan Ryan
fastballs across one of Hollywood's classiest restaurants." Nicole
stood up and started pacing again.

Desmona knew she was
right, but there was also the question of
The Part
. The one that might finally
break her typecast. At twenty-eight, playing the virgin was getting
a little…old. "Have you heard anything from the studio?"

Her agent immediately
looked away. "Not yet, but I know I will."

Desmona felt her eyes well
up. "I
cannot
lose that part, Nikki, I just can't. It's got another Oscar
written all over it."

The agent looked at her
watch and changed the subject. "Look, the cops have been very
accommodating but won't let us stay here forever. And you know the
'razzi aren't going anywhere. So we might as well get this over
with." Nicole reached down into a shopping bag and pulled out a
wide brimmed woman's hat and a pair of oversized sunglasses, then
placed them on the table. "This will help."

"Nothing I can do about
that, Des. You've got one of the most famous faces on the planet.
I've got the Navigator so you can hide in the back. You just have
to get ten feet from the door to the car."

"That's the least of your
problems, Des."

Desmona put on the
disguise, stood up, and headed for the door. "Take me home, Nikki.
Just take me home."

The Vulture, being only
five feet four inches tall on a good day, liked lofty perches to
survey her prey. Her thirty year old body had spent enough days
being battered by the rest of the 'razzi, who were mostly
overweight men. Manners, of course, were non-existent in her
particular field. When she picked up a camera, she wasn't a woman
anymore, just a sexless shark in a feeding frenzy who often got
stepped on by those twice her size. Shoving angry photogs out of
the way when you only had one hundred and ten pounds to play with
wasn't terribly effective. Position, in her case, was more
important than strength when it came to getting the money
shot.

So The Vulture would take
flight, but this gig needed a truly high perch, and she had called
in a marker to get it.

Well, not exactly a
marker. But Roger the phone man knew that if he ever wanted to see
Roxanne Rizzo do the equivalent of a pole dance around his four
poster bed again and whip her raven hair across his face, he'd
better play ball and do it fast.

His bucket truck was
already at the location when she screeched to a halt one block from
the Jackson estate. The rest of the 'razzi were already there of
course, lining the driveway like electronic shrubs. She turned down
a side street and ditched her car, then ran back up the hill where
Roger was standing next to the truck.

"I can get in serious
trouble for this," he said, wiping a bit of sweat from his
forehead.

She walked up to him,
wrapped her arms around him, then pulled back and gave his crotch a
little squeeze. The concern melted from his face as she reminded
him that she could suck a golf ball through a garden hose without
smearing her lip gloss. "It'll be worth your while."

"Of that I'm sure." He
reached into the front seat of the truck and pulled out a phone
company vest and hard hat. "Put these on. You need to at least look
the part."

"Fine." She dropped her
camera bag, put on the vest, pulled back her hair and was good to
go.

Roger put the hard hat on
her head, then leaned back in admiration. "It's you."

She grabbed her bag and
hopped in the bucket. "Okay, take me up."

"Hold on to the sides," he
said. He pointed to the controls inside the bucket. "These are the
only levers you have to worry about. This one releases the bucket
so that it always remains vertical while I'm sending you up, and
this one locks it when I get it extended. Got it?"

Roger moved toward the cab
of the truck. As soon as he was out of sight, Roxanne Rizzo morphed
into a bloodthirsty killer. The bucket began to move, and The
Vulture took flight.

Desmona sat in the back
seat as Nicole drove her through the streets of Beverly
Hills.

The world's most famous
and beloved actress was about to become a prisoner in her own
home.

"Okay, look alive. There
they are," said Nicole. Desmona looked out the windshield and saw
them running into the street, an angry electronic mob jockeying for
position. She slid down onto the floor of the Lincoln Navigator and
pulled a blanket over her body. She felt the warm carpet of the
floor mats against her face while the smell of pine air freshener
filled her lungs.

She felt the car slow down
and knew Nick was at the entrance to the compound. "Stay down,"
said Nicole.

She heard the 'razzi
yelling her name, screaming questions at the tinted
windows.

"Des, are you still hung
over?"

She felt a few thumps
against the car door and knew they were shooting through the glass.
She pulled the blanket tighter around her and began to
shiver.

She heard the motor of the
gate as it swung open and knew she was almost home. She felt a bump
as the car rolled over the curb. The pounding on the car doors
stopped and the voices faded. Her heart downshifted as the car came
to a stop.

Demon Night by Meljean Brook
Rising From the Ashes: The Chronicles of Caymin by Caren J. Werlinger
Heads Up! by Matt Christopher
A Beautiful Forever by Anderson, Lilliana
This Forsaken Earth by Paul Kearney
Nashville Chrome by Rick Bass
Heaven to Wudang by Kylie Chan
Surrender to Her Spanish Husband by Maggie Cox
The Girl and The Raven by Pauline Gruber
Wolf's Blood by Jane Lindskold