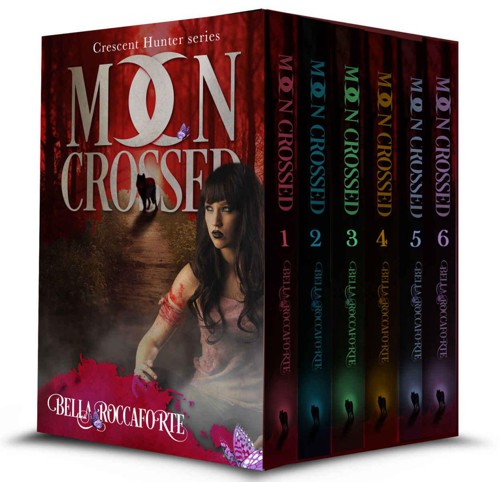 The characters and events in
this novel are entirely fictional. No similarity between any of the names,
characters, persons, and/or institutions in this book with those of any living
or dead person or institutions is intended, and any such similarity which may
exist is purely coincidental.

All rights reserved. No part
of this book may be reproduced in any form by any electronic or mechanical
means including photo- copying, recording, or information storage and
retrieval without permission in writing from the author.

For though we dwell in the same darkness our song will forever be a
discordant symphony, barely perceived.

I am a killer.

My kind have an
important purpose to the wolf-borne. We were created to love and
serve the wolves, even when it hurts.

Every summer at hunter
training camp, a shaman told the story of our creation. Hunters of
all ages would circle the campfire, enthralled by the weaving of the
tale playing out in the embers.

“Wolf-borne
were cursed with moon-touch. When infected, they lose their humanity
and become bloodthirsty killers. An afflicted wolf is unable to shift
into human form or travel across the moon bridge when they die,
condemning their spirit to wander aimlessly for eternity.

“The
original seven Elder Shamans convened to find a solution. They
decided to create a race of wolf-borne that were unable to shift and,
therefore, be immune to the touch. Their purpose: to exterminate the
moon-touched and guide them across the moon bridge to heaven.

“Faramund,
the oldest of the original seven, understood the importance of
compassion and affection the new race would require. They must never
use their power against the wolves able to shift, and the new breed
would need to love—with every part of their being—the
ones they were designed to kill.

“These
shamans tried many times to conjure the perfect hunter, but there was
never the degree of unconditional love necessary. The earliest
iterations were cruel or apathetic.

After
numerous failures, Rayel looked thoughtfully into Faramund's eyes.
‘Brother, you know what it is they lack?’

“At
the next conjuring, Faramund sacrificed his own heart; it was the
only way to hand down the love he felt for his people.

“Rayel,
with moist eyes, cut Faramund's heart from his chest, and while it
was still beating, placed parts of it in each of the original seven
hunters.”

The Elder Shamans
gifted us with an intense, if not irrational, love for the
wolf-borne. Hunters are incapable of feeling true happiness unless we
are among wolves. Being part wolf, we have special abilities:
heightened speed, strength, hearing, sight, smell and wit. But the
greatest of our power can only be accessed in the presence of a wolf.

Hunters heal quickly,
but not as fast as wolves. We are not immortal. Aging comes at a
normal rate; however, many of us never see our forties. I've never
met a retired hunter, but I
have
made the acquaintance of many
hunter orphans.

Because the power we
were given will grow too strong, hunters and wolves are forbidden
from living or being with one another for extended periods.
This
is the hunter's curse. We pay the price for our magic, pound for
pound, with the sorrow of unrequited love. The inherent draw hunters
have to wolves is every hunter’s undoing, even when we want to
hate them, we can't. Faramund's heart beats in my chest, and no
matter how much pain and destruction wolves bring to me, I am
helpless to do anything but love them.

My life will only ever
have small slices of happiness—like when lightning cuts through
a dark room for a split second. Everything is clear; but it's
fleeting, and the darkness returns. You struggle to remember what the
room looks like, fumbling through, waiting, hoping for the light to
shine again. But it never comes.

Finding the epitome of
your completion is beautiful; never being able to have it is an
ongoing cycle of emotional death. Denying the allurement when
everything about you visibly glows and hums when you are near him is
torment. No words can describe the irrefutable magnetism that has to
be fulfilled lest it cause the universe to be consumed by a giant
black hole opening only to swallow the sorrow from the deprivation.
Without a doubt, my heart has been cut open, and bleeds his blood,
because I hurt him just by existing.

It is said that we
should be careful with our words; misplaced, they cut deeper than any
blade. People who believe that have never felt the true pain of
silence. Regardless of the silence, or the brief stints of joy, I
will always be what I am first: a hunter.

I am
a killer.

Chapter One
My Heart

“Clarice,
you must never trust them. You must never allow them into your heart
because they will destroy you.” My father's Irish brogue always
has an extra edge when we're having
this
talk.

“But Da, they
can't all be bad.” I hop over a downed branch in the forest,
then look up at him expecting a different answer.

“No, they
are
all bad. Straight to the core.” He wraps his huge hand around
mine, helping me over a small creek cutting through the landscape of
our property.

“But you haven't
met them all; there still could be good ones out there.” Even
now, hearing myself say those words, I yearn to feel innocence just
once more.

He kneels down, putting
his hands on my shoulders, then motions to the creek. “I have
seen this creek run red with the blood of the innocent. Most days,
they look like us, act like us, love like us, but when they become
moon-touched their instincts take over They are killers.”

Murder in Bollywood by Shadaab Amjad Khan
Shadow of Doom by John Creasey
The Last Election by Carrigan, Kevin
Beyond the Veil by Pippa Dacosta
Midnight Outbreak by Jeffus Corona, Brandy
Among the Imposters by Margaret Peterson Haddix
A Most Wanted Man by John Le Carre
The Irish Warrior by Kris Kennedy
The Manzoni Family by Natalia Ginzburg
Blood Maidens by Barbara Hambly