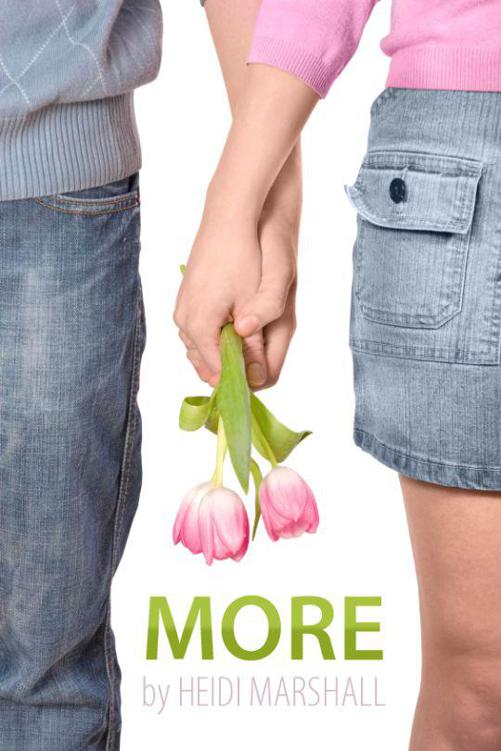 My mother, who taught me to read and write, taught me to trust in God, is a daily example of unconditional love, and is one heck of a gardener.

Aaron, who inspired me to chase after my dream by chasing after his own, has helped me discover my worth, and is a better Scrabble player than I’ll ever be.

Kate Henry sat in the backyard, running her fingers through the grass and daydreaming like any other nine-year-old would do. The sparse backyard didn’t lend much to the imagination – oh sure, it was green and well kept, but it was boring. Vanilla. Status quo.
When I grow up, I’m going to have a house with a beautiful yard where I can throw parties and play hide-and-seek and run around with all of my dogs. When I grow up, everything in my life will be beautiful.

“Listen, Olivia, I don’t want to hear it! This marriage isn’t what it used to be. I’m exhausted; can’t you see that? I’m done. Through.” Kate stiffened as she heard her father’s angry voice drifting across the yard. Her father rarely got angry. In fact, nothing made him happier than his only daughter. They loved to spend time together playing catch or taking hikes or riding their bikes to the coast and back. Kate never forgot the time that her father convinced her to make picket signs one night while her mother Olivia was cooking salmon, and they marched through the kitchen chanting “Eat a pizza, save a fish!” Yes, they had a special bond since the day she was born, and Kate worshipped her father.

“Peter, listen. Don’t do this. Don’t throw everything away. We can get through this.” Kate could hear that her mother’s voice was calm, yet frightened.

“Don’t act like you care all of a sudden! You haven’t cared for years!”

“You know that isn’t true,” Olivia said. “I care. I care more than I could ever explain to you. I meant those vows when I said them. For better or for worse. We’re just going through a rough patch, but I still love you very much and I will fight for our marriage!”

“I met someone. It’s been going on for months now. I’m leaving.”

Kate stood up quickly.
What? Daddy is leaving? Where is he going?
Although just a child, Kate knew that things hadn’t been perfect at home recently. Her father’s round-trip daily commute of almost three hours made his hours at home few and far between. The time he spent with his family had been growing less frequent. Kate was aware that her mother was working hard to protect her from the harsh realities of a troubled relationship, but even her mother couldn’t protect her from what was about to happen.

“I did, Olivia. Look, we tried. We just don’t love each other anymore. There’s no point to this.”

“I’m sure she’ll understand. Lots of kids’ parents get divorced, and they all learn to deal with it. She’ll be fine.”

“Peter Henry, I swear I will never forgive you for doing this to our daughter. You can ruin my life, but please don’t do this to her. What are you teaching her? That it’s okay to give up when things get tough? That it’s okay to walk out on your family? That men can’t be trusted?”

Kate crept up to the window of her parents’ bedroom and carefully stood on her tiptoes to get a peek at the scene that was unfolding. Her mother was blocking the door, hands on her hips. Kate’s eyes shifted to her father. She watched in confusion as he looked at her mother with a blank expression, picked up a bag, and walked right by Olivia and out the door.

Kate sank back down onto the grass, the argument still ringing in her ears.
My dad…is gone? But he’s coming back, right? He can’t just…leave
, she thought. Hearing the sound of her mother’s cries, she again stood up to peer in the window. She saw her mother crumpled up in a little ball on the floor, weeping as if her life was over.

Kate quietly snuck in the front door and went straight to her room. Not knowing what else to do, she got in her bed, curled up under the covers, hugged her soft stuffed panda to her chest, and began to cry softly.

The alarm clock really didn’t deserve this kind of treatment. It had been faithfully waking her up every morning for years. Well, except for those glorious Saturdays when she got to sleep in. And not only was the alarm clock faithful; it was understanding. It could take the abuse, but get over its hurt feelings nine minutes later to do its job again.

“You win,” Kate mumbled, defeated, from beneath a massive mountain of pillows.

Growing up, Kate slept in a hard twin bed. She had never known what she was missing until she bought her first pillow top queen sized mattress five years ago. Ever since, her bed was always adorned with beautiful linens and a fantastic amount of pillows. Maybe it was this glorious bed that contributed to the difficulty she was having emerging from her cocoon and getting going this morning.

After she had showered, she pulled her soft terrycloth robe around herself and opened her closet doors. The corners of her mouth turned up in a smile and a satisfied feeling came over her as she looked at her impeccably organized closet. On one side sat neat stacks of jeans and an array of hanging jackets, slacks, and dresses; on the other side were shirts. First sorted by type of shirt (long-sleeved, short-sleeved, and tank top) and then sorted by color, Kate’s closet was a rainbow of logic and order. She slipped on a pair of gray pants and pulled on a lightweight blue sweater, which she pulled from the long-sleeved section in between green and purple, of course.

Looking in the mirror at her wild and damp auburn hair, she asked, “Okay hair, what do you want to be today? Sassy or sleek?” Kate nodded in agreement and said, “Yep, you’re right. I’m feeling sassy today too,” as though her hair had somehow conjured an audible reply.

She fixed her hair, put on just enough makeup, and chose a cream colored jacket from her extensive jacket collection. (“Why on earth do you have so many jackets?” her friend Amy always said. “You clearly have an addiction.”) After slipping on a pair of heels, she headed down the hall of her small apartment where she had lived since moving to Rocky Mount. There were only ten units in the complex, all of which faced out onto a central courtyard. Even though she lived alone, smiling and waving at her neighbors always made Kate feel like part of a little community; a feeling she loved. She grabbed her keys off of the dining table with the eclectically mismatched chairs before walking out her front door to her car.

It was a short four miles from her apartment to the bookstore that she managed, but she always found time to listen to music on the way to work. “Okay iPod, pick a good one today,” she said as she waited to hear what song the shuffle setting would choose.

Sometimes she sat in her driveway and listened to an entire song before heading off to work, but because of the earlier alarm clock abuse, Kate didn’t have the time. She pressed play and started driving. “You done good,” she said to the iPod when she heard the first strains of Bon Jovi’s “Livin’ on a Prayer.”

A few minutes later, she unlocked the door of the bookstore and clicked her way across the front room. “Meredith?” she called.

“In the office, hon!” came a voice from deep inside the store. It wasn’t a huge store, but Bestselling Dwelling was a staple in the city of Rocky Mount. Occupying a converted old 20’s Craftsman two-story house, the store was full of character far beyond those between the covers of the books it housed. Complete with creaky wood floors, built-in bookcases, many separate rooms for different genres of books, and lots of corners perfect for curling up with a good book, the store was a favorite among locals. Customers loved to spend hours browsing through the store, searching for a new treasure to take home with them.

Kate made her way back to the organized chaos that was Meredith’s office and saw Meredith Hammond, who owned the bookstore and also happened to be her best friend Amy’s grandmother. She was sitting behind her desk with her morning tea and the most recent People magazine.

It was quite a picture. This beautiful, classy woman in her seventies, with her immaculate outfit and perfect white hair that matched her strand of pearls, who had traveled the world with her husband Mark and never had a shortage of stories to tell, was reading about who had the worst outfit at the Golden Globes and the most recent celebrity relationship scandal.

With a soft snort, she shook her head, took the magazine out of Meredith’s hands, and started flipping through it.

“You know, Meredith, you are just too much. Here you are, surrounded by all of this amazing literature every day, and yet you choose to read this pedestrian nonsense. I mean really – what would Mark say?”

Meredith’s late husband was an accomplished author of a series of historical fiction novels about European royalty. It was his passion for literature (not to mention the money he made from his book sales) that had built this modest bookstore over 40 years ago.

Meredith snatched the magazine back from Kate. “I’ve read literature from War and Peace to Winnie the Pooh and everything in between. Now I’m an old woman, and I’ll read what I want. Hmph!” She flipped back to the page where she left off and pretended to be indignant.

Kate smiled and headed out to the counter in the room that used to be the kitchen, although you never would have known it. When the Hammonds bought the house they completely gutted the kitchen and added a large pine desk that served as the sales counter in the place of cabinets and appliances. “You’re gorgeous. I love how you brighten this place up,” she said to the vase of lilies next to the register that she had placed there the day before. Kate brought in fresh flowers to the store at least once a week.

Glancing over at Meredith in her office, Kate smiled as she thought what a blessing she had become in Kate's life. She had grown to love and respect Meredith very much, and she was so grateful to have this job, but more so to have her in her life. She knew that Meredith prayed for her daily, and she often went to her for advice. Although older than Kate’s mother, who lived on the opposite coast, she had become somewhat of a second mother figure to her.

“Meredith, I want to be just like you when I grow up,” she shouted towards the office.

“Of course you do, dear,” she replied with a smile in her voice. “I’m incredible.”

Hearing the front door bell jingle, Kate wandered into the front room. “Good morning, Phoebe,” she said, recognizing one of many frequent customers who lived in the neighborhood.

“Can’t complain. Are you looking for anything in particular?"

“You bet I am. My son is all about airplanes right now. Can’t get enough of them. He’s actually started driving me a little bonkers. I thought maybe a book about airplanes would keep him occupied for awhile.”