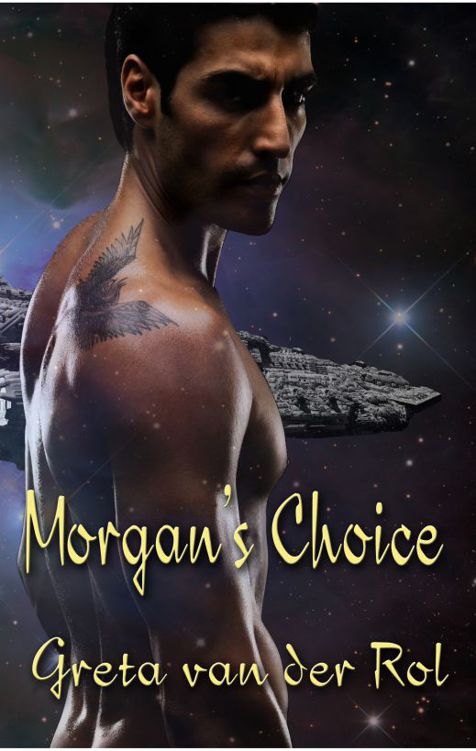 Published in
the United States of America with international distribution.

All rights
reserved. No part of this book may be used or reproduced or
transmitted in any form or by any means, electronic or mechanical,
including photocopying, recording, or by any information storage
and retrieval system, without written permission from the copyright
owner except in the case of brief quotations embodied in critical
articles and reviews.

This is a work
of fiction. Names, characters, places and incidents either are the
product of the authors’ imaginations or are used fictitiously and
any resemblance to actual persons, living or dead, business
establishments, events or locales is entirely coincidental.

Steam rose from
Jones’ food pack, filling
Curlew’s
tiny common room with the aroma of beef stew.
“That’s one month down.” He took the container out of the warmer
and brought it the two steps to the table.

Morgan glanced up at him, still chewing, as
he sank down on the bench opposite. She swallowed her own food.
“Yeah.”

One month’s worth of the existing food supply
gone. Another month, maybe a little longer if they rationed even
further and then perhaps they’d be fishing Tariq’s body out of the
cargo hold, wondering if a bit of cannibalism might be in order.
The thought made her gag but at least it was an option. Running out
of air—that was something else altogether.

She speared some more synthetic plast-food
from her own food pack and lifted it to her mouth.

A staccato bleeping shattered the
silence.

She flung her fork on the table, leapt
through the forward hatch into the bridge and dropped into the
captain’s chair, her heart pounding with a mixture of excitement
and tension, hope and apprehension. She flicked off the wide-range
scanner’s alarm and reached into the computer system with her mind
to adjust the sensors to maximum magnification. Something had just
come out of shift-space close enough to trigger the warning. Maybe
she’d got it all wrong and
Curlew
was still in Coalition space. Because otherwise…

In a fraction of a millisecond she’d
loaded the ships’ images into her implant, extrapolated, rotated to
adjust for angle of approach, measured.
The largest of the three ships was two point one
five times
Curlew’s
length
, but it
had a quite different profile, long and angular. No bulky cargo
hold, so not a freighter. The two smaller ships were more
recognizable, if unfamiliar; small ships with narrow profiles
shaped a little like arrow heads. Short wings, so they’d probably
be capable of atmospheric flight. She checked against the ship
database on her implant. Unknown ships, unknown origin. A worm of
apprehension twisted in her belly. Stupid. What had she expected?
Of course they weren’t Coalition ships.
Curlew
had plummeted so far beyond known space the
navigation system was as useless as the shift drive.

One thing for sure—the ships were headed this
way.

The red numbers on the view screen counted
down time until intercept. Twenty-four minutes, thirty seconds…
twenty seconds… ten seconds. Until they reached here. And then
what? Whatever it was, it was better than dead. Surely.

“
Are they ours?” Jones’
voice startled her. He sat in the
navigator’s seat on the other side of the bridge, gripping the arm
rests with rigid fingers. He’d better keep his hands off the
controls.

“No. At least, they’re not Coalition
ships.”

His Adams’s apple bobbed. He might be a prat
but he wasn’t stupid. No non-Coalition worlds had spaceships worthy
of the name. And yes, she was scared, too.

Were those ships manned? Maybe ‘occupied’ was
a better word. Wriggly green things with three heads? Energy
beings? What other aliens had she ever seen on the holovids? She
tried to lick her lips but her mouth was dry. Hard to imagine that
she might be the first woman to encounter an intelligent alien.
Let’s hope she lived to tell the tale, maybe end up in somebody’s
history book. She rolled her shoulders to loosen up tense muscles.
“Better suit up.”

She pulled a survival suit out of the
compartment in the bulkhead next to her and scrambled into it with
practiced ease, while Jones struggled with the fastenings on the
front of his suit. She helped him fit the helmet over his
shoulders. He clamped it in place; the instrument lights reflected
in the curved transplex, distorting his features. He mashed his
lips, as nervous as she was.

The fighters were visible without
magnification now, dark shapes in front of the starscape, one
slightly behind the other. The view screen showed them in color;
grey, like their larger companion.

Using her implant, she magnified the image
of the protuberances jutting from both short wings. Muzzles? The
twinge of apprehension in her gut strengthened. Surely they
wouldn’t just destroy
Curlew
?

The fighters closed in, one on each side,
circling around the freighter. Like sharks around prey.

She opened a communication channel. “This
is Coalition freighter
Curlew
.
We require assistance. Can you help? Over.”

She tried again, on a broader channel that
might include the on-coming larger ship.

She flexed sweaty fingers inside her
gloves.

The larger alien craft edged closer, the
blunt nose growing in the view screen. The ship had adjusted its
course so that it was running over the top of
Curlew
. Closer it came and closer, its hull clearly
visible in the view screen. Scarred and battered. Not a new ship.
And were those hatches all along its length?

Jones peered up as if trying to see inside
the ship. His eyes were very blue and wide with fear. She probably
looked the same.

A muffled clunk reverberated through the
hull. Jones jumped. Morgan pushed down a surge of adrenalin and
checked the sensor data. A rigid connection extended from a hatch
in the alien vessel to the top of
Curlew’s
cargo hold.

“What are they doing?” he said.

The two fighters took up position, one on
either side of the larger ship. She felt
Curlew
lurch a little as they changed direction and then
they were underway, suspended beneath the belly of an alien vessel
like prey being returned to the village after the hunt.

“They’ve kind of taken us in tow,” she
said.

He grabbed her arm, his panicked fingers
pressing hard against the sleeve of her suit. “What are you going
to do about it?” His voice was a rasp.

She snatched her arm away. “I’m going to shut
down the engines.”

The soft grumble of the sub-light drive died
away, leaving only the sound of her own breathing and the
thundering of her heart.

Oh, good grief.
What did I do to get stuck with this
idiot?
“Do you want to
hold out for a better offer? One more month and we’re dead, Jones.
Finished. Starved to death, out of air.” She thrust out a hand,
pointing to the cargo hold. “Couple of months we’ll be mummified,
just like Tariq. I’d rather take my chances here.”

He backed off, mashing his lips.

A familiar shimmer of energy appeared on the
screen, away in the distance. Morgan aimed the sensors, magnified.
Sure enough. “Another ship just came out of shift-space, heading
this way.” She checked the preliminary data. Wow. “That thing’s
enormous. It’s five klicks long. And I reckon it’s a warship.”

Save her from fucking accountants. She had to
explain everything. “It’s huge, it’s dark with minimal running
lights and it’s very, very fast.” She glanced at the data. The ship
above them was speeding up. What could that mean?

The sensors identified twelve rapidly
moving pinpricks traveling in formation; a squadron of the
warship’s own fighters? She increased the magnification; black,
rectangular. The two fighters shadowing
Curlew
changed vector, on an intercept course with the
new players.

Six of the black fighters peeled off to
engage the two grey fighters. But the other six continued in
pursuit of the larger vessel and
Curlew
. In moments a brief, brilliant explosion marked the end of
one of the two arrowhead fighters. Its companion lasted a little
longer until it, too, exploded into a ball of fragments and energy.
The attacking ships’ shields sparkled as the debris impacted and
disintegrated.

Morgan felt, rather than heard the alien
ship above them release the link. The vessel’s hull seemed to slip
backwards as
Curlew
continued
its momentum.

She watched its progress on the rear
sensors as the long grey shape receded behind
Curlew
, pivoted and powered away, its engines glowing
yellow-white, toward the squadron of fighters from the warship.
Strange. It couldn’t hope to win a battle at those odds. If she
didn’t know better she could almost imagine the ship was trying to
protect
Curlew
. That
prospect sent her heart into overdrive. Why would the
freighter
need
protecting
from the new arrivals?

She brought the ship’s drive back up to
readiness and strengthened the shields. Best get out of the way and
hope
Curlew
wasn’t
going to be a target, too.

The fighters approached, six growing
rectangles. She could see details, now. A cylindrical body down the
center, angled down wingtips, tubes slung under the wings. If they
were going to engage it would be soon. Two more followed, fresh
from destroying the grey fighters, Oh, fuck. Morgan held her
breath. The six slowed down, intent on the long grey ship. But the
other two swept on to match vector with
Curlew
, one on each side. Nobody was firing.
Yet.

The larger ship angled itself with surprising
agility to meet the attack, shifting position from minute to
minute. Gun turrets appeared like spines, protruding all along its
hull. They fired in line, blasts of beams shooting out at the
attacking fighters. If it had been a fireworks display, it might
have been pretty. Shields flared blue as the attackers took evasive
action and regrouped.

The grey ship shifted position again,
rotating on an axis. A missile seared past, then exploded as a beam
from the defending ship hit it. Deflections spattered
against
Curlew’s
shields, enough to start an amber warning light flashing in
the bridge.

Morgan considered easing
Curlew
a bit further away but the two
sentinel ships hadn’t moved. Another complicated maneuver brought
the gray ship closer to
Curlew
.
A bay opened in its hull. Oh, fuck, they’d fired a missile. Her
heart thundered. No, not at
Curlew
—at one of the guard ships. The explosion sprayed all over
the fighter’s shields and ricocheted to
Curlew
. The shields put on a light show of sparks. The
amber light on the console turned red. Rear shield down to
seventy-eight percent. Shit, that was all she needed; destroyed as
collateral damage. She diverted power to the shield
generator.

Two of the attackers fired two missiles
each, four hunters tracking for a kill. The grey ship finished one
but it couldn’t dodge them all. The first hit weakened the shields;
the next two finished her. Radiation and debris from the explosion
flowed past
Curlew,
causing
the shields to light up like an advertising display in downtown
Torreno. The warning system brayed an alert to go with the flashing
red light. She turned off the alarms.

Sailors on the Inward Sea by Lawrence Thornton
The Remedy by Asher Ellis
Tave Part 2 by Erin Tate
Late for the Wedding by Amanda Quick
The Sassy Belles by Beth Albright
Fear City by F. Paul Wilson
Jersey Angel by Bauman, Beth Ann
Geoffrey's Rules by Emily Tilton
Reap the Wind by Karen Chance
The Last Ranch by Michael McGarrity