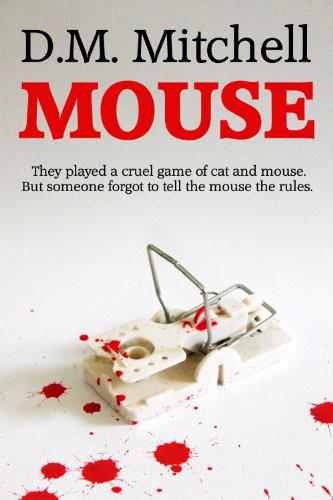 A novel by D. M. Mitchell

The right of Daniel M. Mitchell to be identified as the author of this work has been asserted by him in accordance with the Copyright, Designs and Patents Act 1988. All rights reserved.

All characters
and situations
in this publication are fictitious, and any resemblance to real persons, living or dead, is purely coincidental

Other novels by D. M. Mitchell and available on Kindle:

The House of the Wicked:
a Victorian psychological thriller

The King of Terrors:
a thriller

Pressure Cooker
: a novel of friendship
, love
and redemption

3: The Witch of Devereux Towers

5: An Elephant in the Room

8: Quiet at the Back

9: Bullets to the Soul

10: Slippers under a Bed

21: Incarnations of the Past

29: A Certain Kind of Freedom

33: When the Bough Breaks

But long it could not be

Till her garments, heavy with their drink,

Pull’d the poor wretch from her melodious lay

Her breath fogged up a circular patch on the rippled glass, which shrank and grew again with every exhalation. I never loved this view, she thought. I never loved this place, but I am here all the same and I am destined to stay till the day I die and I am laid to rest in the very earth I find hateful, never able to escape its embrace even in death.

The land she stared at was flat. Not a hill of note for miles. A vein-like network of rhynes scored through the earth, centuries-old drainage systems sitting alongside more modern affairs, taking away the water that troubled this low-lying landscape, taming it, bringing it under man’s industrious hands. It was an ancient landscape, the customs and practices of its people little altered by time. The many fields were largely given over to grassland, to teasel and willow grown commercially as it had been for many generations, a small amount of peat extraction in some areas, and the remainder set aside for arable. But when the rains came down hard – and it was a place where rain was plentiful – and the ditches struggled to cope with the rapid influx of water, the area could easily resemble acres of sodden paddy fields.

There were trees in abundance, but spread out thinly and not enough to stem the wind that raced unfettered across the land, causing the shivering grasses to grow low and sturdy, the hawthorns to arc painfully, and the restless, rustling reeds that lined the dark waters to rock delicately back and forth before the blasts, as if they took the wind in their embrace and danced with it.

In the heat of summer there was little shade out here on the Somerset Levels. The ground baked hard, the grass scorched yellow, and the few cows lay as best they could beneath the cooling shade of the odd-oak tree, left to grow for just such a purpose. Skylarks dribbled song down from a pristine blue sky; bees droned like distant conversations; fish teased the surface of myriad streams, and anyone could be forgiven for thinking this was some ancient idyll unsullied by the modern world. E
specially so as the summer heat wave
of 1976 continued, and day after day the blistering sun refused to back down, in fact seemed to grow ever stronger with each passing hour.

Nothing appeared to complete the illusion of being transported to an altogether more bucolic and halcyon time than
Devereux
Towers
. It stood alone in the middle of a field accessed only by a single dirt-track road; a squat, four-storey-high hamstone building studded with windows on all four sides, the majority of the golden stone surface draped in a shimmering cloak of ivy.

The name
Devereux
Towers
was misleading; there was only one tower protruding from a corner of the build
ing, rising bold and high and topped-off
with a conical roof of red slate, atop this a badly rusted weather vane bearing the coat of arms of one Lord Devereux who had commissioned the building’s erection around the year 1750.

At the time, such a folly, for that’s what it began life as, was not unusual. Some say it was intended to be a representation of a Scottish castle, but Lord Devereux either ran out of money or ran out of enthusiasm, or perhaps both, and only a single tower out of the planned four ever got built. It even boasted a moat at one time, local legend had it, but this had long since been filled in.

Over time the building fell into disrepair, the elaborate geometrical gardens Lord Devereux had constructed to encircle it became overgrown and were eventually ploughed up, leaving the folly standing alone and incongruous in the middle of its bland field, so encased in ivy it almost appeared to have grown out of the ground. Eventually its roof all but collapsed and all that remained were four sturdy walls and the single chateau-like tower.

It looked destined to disintegrate entirely and become absorbed by the land, had it not been for Doctor Alex Leach in 1948. A successful London surgeon he made good on a number of wise investments and decided at the age of forty-one to retire early and become a man of leisure, choosing Somerset for no other reason than it was even then cheaper to buy a house and live here than it was to settle in one of its richer relations of Dorset, Devon and Cornwall. He was never one to waste money unnecessarily. So it came as something of a shock when he declared to his wife and three young daughters that he’d seen a most interesting house and that he had made up his mind to buy it and restore it to its former glory.

When he drove them down the track and pointed out what remained of
Devereux
Towers
his wife declared him mad. The children – then aged ten, six and two respectively – thought it the most wonderful adventure and ran excitedly around the sorry building, leaving their mother and father to argue about the viability of turning this heap of neglected stone into a house and home. This would be the perfect place for them, he said. The ideal place to bring up their children away from the crime and filth of the city. Moreover, think how delightful their collection of antiques would look set against its restored grandeur. He took his wife through imaginary rooms, pointed out where his study would be and where he would display his prized collection of tribal artefacts, his wooden masks, statues and clubs from
Hawaii
,
Fiji
,
Africa
and
South America
, testament to their many exotic trips abroad. She was not immediately impressed. She disliked his primitive collection anyway, so in her eyes it was hardly an argument for taking the place on.

Laura Leach was aged just two at the time. She had only the vaguest recollection of that first visit, more, she reckoned, someone else’s memory implanted in her through the many well-worn stories recounted of the day by her sisters. What she did vividly remember was her mother’s warnings about the instability of the crumbling walls and that they might at any moment come crashing down on her young head and crush it like a red grape. She remembered being faintly annoyed that her mother called her back and hung tightly onto her little hand, preventing her from fully exploring the folly with her sisters, being told she was far too young and might fall down a well or some other disguised danger waiting in the sea of weeds for careless little girls.

In the end, Laura Leach’s father got his way. Men invariably did. They found a perfectly nice cottage to rent in the small market town of Langbridge a few miles away – a town that had grown on the site of an ancient crossing-place over the river Lang – and restoration of
Devereux
Towers
began in earnest. Her father refused to let any of the girls go to the local school, deciding that it was a little too rustic, a little too provincial, full of the common sort and not for people of means. So he engaged the services of private tutors. They were kept very much apart from the local children; indeed the entire family existed in a self-imposed bubble which only select people of the desired class and standing were allowed to burst. Laura Leach became very aware at a young age that whilst all around her there were many miles of open countryside they were allowed to see extremely little of it, and even then only under close supervision. Laura grew a little afraid of it. There were many unseen dangers for the unwary, she was told by both mother and father, and in her imagination the flat, ominous countryside became not something to enjoy but to fear.

Her childhood, she recalled, was very claustrophobic, and yet all was done in the name of love, for she was adored by her father, being the youngest, and he was berated repeatedly by her mother for failing to treat all the girls as equals, an accusation he vehemently refuted. Yet he named the tower Laura’s Tower, and told tales of princes coming to the place almost every week and rescuing princesses from it, because there was always some unfortunate beauty being locked up in it back in those faraway times when princes and princesses were ten-a-penny.

It took a full two years before they could move into
Devereux
Towers
and it was truly magical. She remembered – this time they really were her memories – smelling the fresh paint and varnish, the beeswax polish on the wooden panelling, of new carpets and a hundred other such things that assailed her reeling senses. And finally into Laura’s Tower, where her father proudly opened a door onto a wide, circular room that he’d made into her bedroom, a tremendous arched window looking out onto the land that stretched out beneath her like a rumpled green blanket.

Their visits into Langbridge were infrequent, being mainly on a Saturday morning to collect the groceries from the various small shops in the cramped high street. A regular pattern, hopping from butcher to fishmonger, greengrocer to baker, and finally to the post office to buy stamps and envelopes and writing paper, to buy postal orders and to post letters back to friends and relatives far away in London.

Then one day they passed the cinema. The Empire, they called it. It had a date in stone above the main door: 1926. It occurred to her that she could not recall the last time she went to the pictures and she pestered her mother relentlessly to take her to see a film. Her mother resisted at first. It was probably infested with fleas, she said; they get passed on from sheep and cows, she’d heard. But her father pooh-poohed the idea and said that it looked perfectly charming, all things considered. It reminded him also that it had been an age since he went to the cinema, something they used to do regularly when back in
London
, he said, winking at his wife and mentioning something about the back row, which elicited a scowl in return.

Her Russian Mafia Protector by Bella Rose
The Magnificent Ambersons by Booth Tarkington
Raw by Belle Aurora
People Like Us by Luyendijk, Joris
Promises After Dark (After Dark #3) by Kahlen Aymes
Chill Factor by Rachel Caine
Godfather, The by Puzo, Mario
Captain Future 07 - The Magician of Mars (Summer 1941) by Edmond Hamilton
The Story of Land and Sea: A Novel by Katy Simpson Smith
The Five Pearls by Barry James Hickey