Read Moving Targets and Other Tales of Valdemar Online

Moving Targets and Other Tales of Valdemar 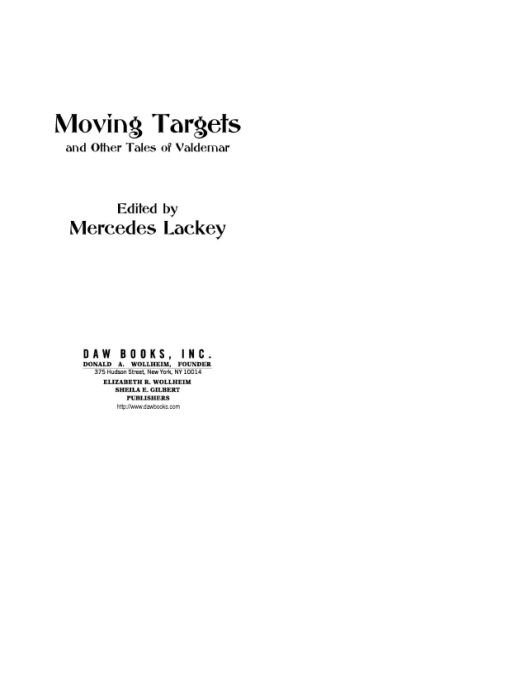 Table of Contents
Title Page
Copyright Page
Acknowledgements
Moving Targets
An Unexpected Guest
The Power of Three
What Fire Is
Dreams of Mountain Clover
The Cheat
A Dream Deferred
The Sword Dancer
Broken Bones
Live On
Passage at Arms
Heart, Home, and Hearth
Haven’s Own
Widdershins
Raves for the Previous Valdemar Anthologies:
“Fans of Lackey’s epic Valdemar series will devour this superb anthology. Of the thirteen stories included, there is no weak link—an attribute exceedingly rare in collections of this sort. Highly recommended.”
—
The Barnes and Noble Review
“This high-quality anthology mixes pieces by experienced authors and enthusiastic fans of editor Lackey’s Valdemar. Valdemar fandom, especially, will revel in this sterling example of what such a mixture of fans’ and pros’ work can be. Engrossing even for newcomers to Valdemar.”—
Booklist
“Josepha Sherman, Tanya Huff, Mickey Zucker Reichert, and Michelle West have quite good stories, and there’s another by Lackey herself. Familiarity with the series helps but is not a prerequisite to enjoying this book.”—
Science Fiction Chronicle
“Each tale adheres to the Lackey laws of the realm yet provides each author’s personal stamp on the story. Well written and fun, Valdemarites will especially appreciate the magic of this book.”
—The Midwest Book Review
NOVELS BY MERCEDES LACKEY available from DAW Books
THE HERALDS OF VALDEMAR
ARROWS OF THE QUEEN
ARROW’S FLIGHT
ARROW’S FALL
THE LAST HERALD-MAGE
MAGIC’S PAWN
MAGIC’S PROMISE
MAGIC’S PRICE
THE MAGE WINDS
WINDS OF FATE
WINDS OF CHANGE
WINDS OF FURY
THE MAGE STORMS
STORM WARNING
STORM RISING
STORM BREAKING
VOWS AND HONOR
THE OATHBOUND
OATHBREAKERS
OATHBLOOD
THE COLLEGIUM CHRONICLES
FOUNDATION
BY THE SWORD
BRIGHTLY BURNING
TAKE A THIEF
EXILE’S HONOR
EXILE’S VALOR
VALDEMAR ANTHOLOGIES
SWORD OF ICE
SUN IN GLORY
CROSSROADS
MOVING TARGETS
Written with
LARRY DIXON:
THE MAGE WARS
THE BLACK GRYPHON
THE WHITE GRYPHON
THE SILVER GRYPHON
DARIAN’S TALE
OWLFLIGHT
OWLSIGHT
OWLKNIGHT
OTHER NOVELS
THE BLACK SWAN
THE DRAGON JOUSTERS
JOUST
ALTA
SANCTUARY
AERIE
THE ELEMENTAL MASTERS
THE SERPENT’S SHADOW
THE GATES OF SLEEP
PHOENIX AND ASHES
THE WIZARD OF LONDON
RESERVED FOR THE CAT
And don’t miss:
THE VALDEMAR COMPANION
Edited by John Helfers and Denise Little 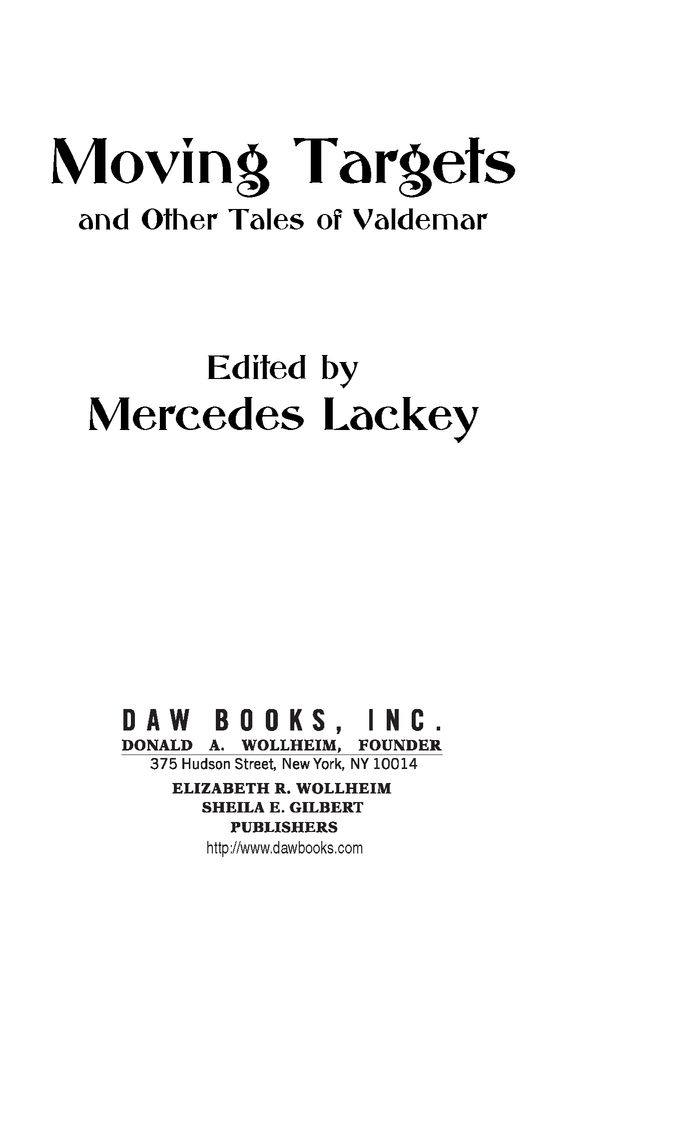 Copyright © 2008 by Mercedes Lackey and Tekno Books
All Rights Reserved
DAW Book Collectors No. 1457
DAW Books are distributed by Penguin Group (USA).
eISBN : 978-1-101-49434-9
All characters and events in this book are fictitious.
Any resemblance to persons living or dead is coincidental.
The scanning, uploading and distribution of this book via the Internet or any other means without the permission of the publisher is illegal, and punishable by law. Please purchase only authorized electronic editions, and do not participate in or encourage the electronic piracy of copyrighted materials. Your support of the author’s rights is appreciated.
First Printing, December 2008