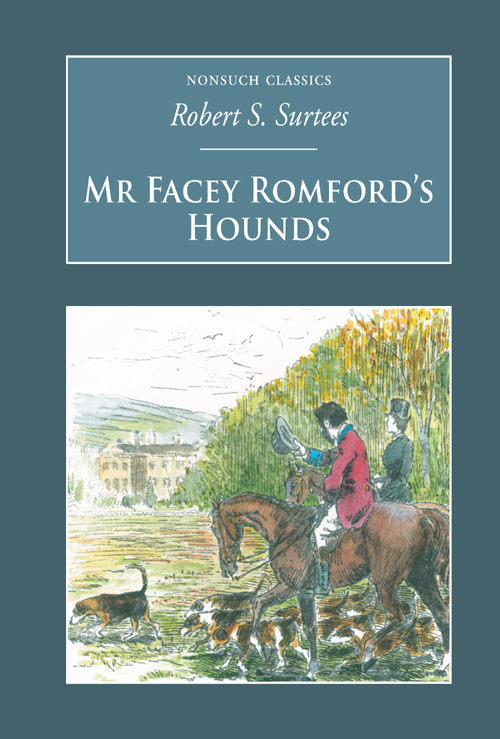 Nonsuch Publishing Limited is an imprint of The History Press

This ebook edition first published in 2011

This ebook is copyright material and must not be copied, reproduced, transferred, distributed, leased, licensed or publicly performed or used in any way except as specifically permitted in writing by the publishers, as allowed under the terms and conditions under which it was purchased or as strictly permitted by applicable copyright law. Any unauthorised distribution or use of this text may be a direct infringement of the author's and publisher's rights, and those responsible may be liable in law accordingly.

C
ONTENTS
I
NTRODUCTION TO THE
M
ODERN
E
DITION

R
OBERT
S
MITH
S
URTEES WAS BORN
in 1805 into an old County Durham hunting family. He was the second son of Anthony Surtees, squire of Hamsterley Hall, a position Robert succeeded to upon the death of his father in 1838. After a privileged and happy childhood, Surtees' education took him to London, where he practised law after being articled to a solicitor in 1822. His interest in writing, however, overshadowed his legal duties, and he began to make regular contributions to the
Sporting Magazine
. He soon went on to co-found its rival publication, the
New Sporting Magazine
, which he edited until 1836. It was during this time that he created the character of John Jorrocks, the sporting grocer, who featured regularly in the magazine in a series of comic sketches, themselves subsequently collected in a book entitled
Jorrocks' Jaunts and Jollities
in 1838. It was in this work that Surtees' love for writing about the world of country sports, and in particular hunting, was first glimpsed, and it was to become a common theme throughout his subsequent novels.
Mr Facey Romford's Hounds
was the last such novel, published posthumously in 1865 and often regarded as his greatest work. It followed other successful hunting novels such as
Mr Sponge's Sporting Tour
, and tells the story of Facey Romford, a confidence trickster, who, after the unexpected loss of his inheritance, passes himself off as his wealthy namesake in order to become Master of the Heavyside Hunt.

Mr Facey Romford's Hounds
was written in the period after Surtees had inherited the family property, at which time he became closely involved in the running of the estate. He gladly abandoned his legal career to return to Durham, where he embraced the life of the traditional country gentlemen. His writing was, no doubt, greatly inspired by the society surrounding him, which he so accurately observed from his own prominent social position. Indeed, his love for writing was somewhat overshadowed by his public persona as the âhuntsman squire', who became heavily involved in local affairs and politics. His literary style was not appreciated by his contemporaries it took a signifcant period of time for it to receive the credit that it deserves. The depth of detail he provides of the daily lives and activities of English provincial society renders his writings a valuable nineteenth-century social commentary, as well as a wonderful example of satirical humour and rich characterisation.

Surtees' novels could still be overlooked today, due to their narrative emphasis upon countryside sports and the narrow audience this may seem to attract. It could well be imagined that the diminishing popularity of fox-hunting would be mirrored by a declining interest in reading about it, especially by those who know very little of it, and particularly in light of the controversies surrounding its status as a sport today. This would, however, ignore the contextual importance of such pursuits at the time in which
Mr Facey Romford's Hounds
was written. Fox-hunting had developed over time to be supported by the majority of the landed aristocracy, who often kept their own packs of hounds. Its popularity continued to grow as it began to be enjoyed by local businessmen, laywers and shopkeepers, who set up their own hunt clubs. These clubs could be considered as the social hub of countryside culture, and due to this there developed the concept that hunting was a positive force which brought together the entire rural society in a single activity. The expansion of the railways made it an activity open also to city dwellers. Therefore, novels such as
Mr Facey Romford's Hounds
can be seen as detailing a major social activity of the period, enjoyed by both men and women, as well as different social classes. Despite the controversy precipitated by hunting in contemporary Britain, Surtees' novels continue to hold a great deal of attraction for the modern reader, particularly for the rich and colourful portrayal of countryside life they provide.
Mr Facey Romford's Hounds
in particular can be appreciated for the delightful way the hunt is brought to life through its larger-than-life characters, satirical humour and entertaining narrative.

I
T WAS LUCKY FOR OUR
friend Mr. Romfordâor Facey Romford as he is sometimes familiarly calledâthat there was another Mr. Romford in the world of much the same tastes and pursuits as himself, for our Mr. Romford profited very considerably by the other Mr. Romford's name and reputation. In the first place they were both called Frank,
1
and in the second place they both kept hounds; on different principles, to be sure, but still they both kept hounds, and the mere fact of their doing so was very confusing. Added to this, our friend Facey being of the pushing, acquisitive order, accepted the change without doubt or hesitation.

We don't mean to insinuate that he went about saying “I am the rich Mr. Romford, owner of Abbeyfield Park, patron of three livings, J.P., D.L.,” and all that sort of thing; but if he found he was taken for that Mr. Romford, he never cared to contradict the impression. Indeed, if pressed, he would mount the high horse and talk patronisingly of the other Mr. Romfordâsay he was a deuced good fellow, if not much of a sportsman, and altogether pooh-pooh him considerably. To hear Facey talk, one would think that he had not only persuaded himself that he was the right Rornford, but had made the right Romford believe so too.

Of the Facey pedigree we would gladly furnish the readers of this work with some little information, but unfortunately it does not lie in our power so to do, and for the self-same reason that prevented Nimrod from detailing that of Mr. Jorrocks', namely, that we do not happen to know anything. When in his cups (which, however, is but seldom), Facey has been heard to observe that he was “nobbut well bred on one side of his head.” “My moother,” he used to say, “was a lady, but my father was a gardener.” The illiberal, indeed, have asserted that the parentage was pretty equal on both sides of the head, for that the mother was a lady's-maid, and the father a gardener, a union that certainly does not seem so inconsistent as the other.