Murder in a mill town 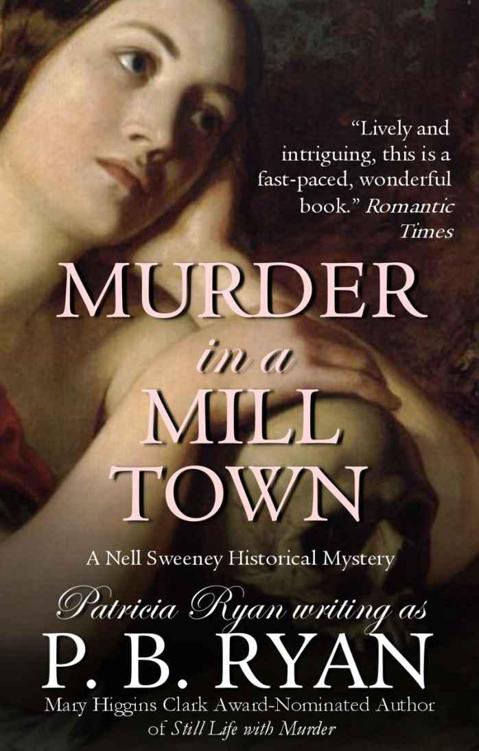 “Nell is one of the strongest, most honorable and dearest heroines to grace the pages of an amateur sleuth novel.... P.B. Ryan knows how to write a tale that will grip and keep readers’ interest throughout the novel.” —
Midwest Book Reviews

MURDER IN A MILL TOWN

Copyright © 2004 Patricia Ryan. All rights reserved. With the exception of quotes used in reviews, this book may not be reproduced or used in whole or in part by any means existing without written permission from the author.

Originally published by Berkley Prime Crime, a division of Penguin Group (USA) Inc., as Book #2 of The Gilded Age Mysteries

For my daughter Leigh, a constant source of joy and inspiration

Heaven and hell suppose two distinct species of men, the good and the bad. But the greatest part of mankind floats betwixt vice and virtue.

“We quarreled last March,” said Nell Sweeney in a manfully deep, working class English accent—or her best attempt at one—embellished with just the slightest quaver of lunacy. Reaching up to prevent her colossal papier-mâché top hat from sliding off her head, she added, “Just before he went mad, you know. It was at the great—”

“Point! Point!” Gracie Hewitt sprang up from her little gilt chair at the head of the nursery tea table. “You s’posed to point at the March Hare with your spoon.”

“Oh, yes.” How could Nell have forgotten, after the scores of times she’d been obliged to read aloud—and, more recently, perform—Gracie’s favorite scenes from
Alice’s Adventures in Wonderland
. She lifted the dainty silver spoon from its place next to her miniature gold-rimmed, bone-china tea cup. “Have a seat, then, like a proper young lady, and I shall continue.”

The little girl sat back down, fluffing up her white pinafore. A copy of that worn by Alice in Mr. Tenniel’s illustrations, it was Gracie’s first sewing project, crafted with Nell’s guidance but entirely by her own plump little four-year-old hands. The stitches were wide-spaced and irregular, the tucking disastrous, the hem puckered. Gracie, bless her heart, wore it with as much unalloyed pleasure as if it were from the House of Worth.

“We quarreled last March—just before
he
went mad, you know.” Nell aimed her teaspoon across the table at Albert, the lovingly tattered stuffed rabbit who’d been cast as the March Hare in this morning’s production. She stole a glance at the book, wedged open by the teapot, to confirm the wording of the next bit. “It was at the great concert given by the Queen of Hearts, and I had to sing—” she cleared her voice dramatically “‘—Twinkle, twinkle, little bat. How I wonder what you’re at.’ You know the song, perhaps?”

“I’ve heard something like it.” Not only had Gracie committed her lines to memory, but she spoke them with a subtle, and remarkably credible, upper-crust British inflection—a spot-on imitation of her beloved “Nana,” Viola Hewitt. The effect was uncanny, putting Nell in mind not so much of Viola, but of Viola’s eldest son, William. Same inky hair, same watchful eyes and knowing little smile... And when she spoke with that accent—milder than that of Will, who’d been brought up and educated in England, but close enough—it sent shivers up Nell’s spine.

I’ll be seeing you, Nell,
he’d told her that day in Mount Auburn Cemetery just before he’d turned and walked away into the cold morning sunshine. That was five months ago—and of course she hadn’t seen him. The circumstances that had thrown them together for those few weeks last winter had been extraordinary. She couldn’t imagine a situation in which their paths were likely to cross again. Dr. William Hewitt, his medical degree notwithstanding, was a professional gambler and dope fiend. For all Nell knew, he’d dissolved like a wisp of opium smoke into the back alleys of Shanghai, never to be seen again.

That prospect filled her with a curious fusion of despair and relief. She should be glad to be quit of him, adept as he was at scratching open her deeply buried past. She should thank God he was gone and pray that he never returned.

“Miseeney!” Little hands slapped impatiently at the damask tablecloth as Gracie bobbed up and down in her seat. “You got to finish the song, so I can say my line.” Her favorite line, she meant. “I said, ‘I’ve heard something like it.’ Now you say—”

“Yes, I know.” Resuming her Mad Hatter voice, Nell said, “It goes on, you know, in this way. ‘Up above the world you fly, Like a tea-tray—’”

A knock on the nursery door made them both start: two loud raps, bony knuckles striking oak with staccato force—
once! twice!
—followed by a reverberating silence.

Gracie pulled a face. Even she recognized the distinctive door-knock of Mrs. Mott, the aging housekeeper who governed the Hewitts’ Tremont Street mansion with despotic zeal—although her visits to the third-floor nursery were blessedly few and far between.

Nell reached up to remove her Mad Hatter headgear, hesitated, and merely tilted it to a rakish angle, causing Gracie to gasp in delighted anticipation of Mrs. Mott’s reaction to such deviltry. It was a ridiculously tall hat with a flared crown in the continental style, very similar to that in the Tenniel illustrations, right down to the price tag reading
In this Style 10/6.
Nell and Gracie had made it together one blissfully rainy afternoon, out of flour paste, rabbit wire, blue and yellow paint, and a torn-up copy of the
Daily Advertiser
.

Nell opened the door with a flourish, gripping the hat’s brim to keep it from falling off. “Mrs. Mott. What a rare pleasure. Do come in.”

The black-clad housekeeper stood unmoving in the doorway, her mouth as pale and tight as an old knife scar as she took in Nell’s headwear. Looking away with an ostentatious lack of expression, she said, “Your presence is required in the Red Room.”
Your presence is required,
not
Mrs. Hewitt asks if you wouldn’t please join her in the Red Room,
which Nell was quite sure was how her employer had worded it.

“Immediately, if you please.” The wording nettled Nell, implying as it did that Mrs. Mott had the right to issue her orders. As Gracie’s nursery governess—and Viola’s de facto companion—Nell was neither servant nor gentlewoman, but that most rare and singular of creatures, a respectable working woman. She answered not to Mrs. Mott, like the rank and file household staff, but to Viola Hewitt, who accorded her a refreshing autonomy in the exercise of her duties.

Mrs. Mott surveyed the nursery as she did every room she entered, with a mechanically smooth swivel of her head reminiscent of a hawk scanning the terrain in search of something on which to pounce. It was a large room, decorated by Gracie’s indulgent Nana to resemble a sitting room at Versailles, with an ornately carved, cherub-adorned ceiling, etched mirrors in gilt frames, and acres of gleaming floral damask in shades of ivory, shell pink and sea green. Nell knew precisely what the grim old lady was thinking as she took in this frothy opulence: All this for a housemaid’s unwanted bastard.

When Viola Hewitt made the decision four years ago to rear the newborn Gracie as her own, she’d had to fend off disapproval on every front. No one, however, had been more appalled than Evelyn Mott. The third generation of her family to serve the Hewitts, she prostrated herself at the altar of good breeding and its ancillary virtue, proper comportment. She suffered no deviations from propriety on the part of her household staff, and had become, by all accounts, apoplectic upon discovering that the maid Annie McIntyre was with child; for, although Annie was married, her husband had been at war when Gracie was conceived. Viola’s intervention, much resented by Mrs. Mott, had saved Annie’s reputation and livelihood; she worked for the Astors in New York now, as did her husband. More important, it had kept Gracie from ending up in the county poor house, where, as Nell knew all too well, she would have been lucky to survive to her first birthday.

Mrs. Mott concluded her inspection by peering through her diminutive spectacles at the little girl whose existence so tainted her carefully regulated domain. Did she know who had actually fathered Gracie? The child’s resemblance to Will grew stronger day by day—especially now that she was beginning to sprout so; she was as tall as some of the six- and seven-year-olds with whom she played every afternoon in the Common and Public Gardens. Mrs. Mott must at least suspect the truth, that Viola had adopted Gracie in part because the child had been fathered by her own son. Not that this would lessen the housekeeper’s distaste for the little interloper. Quite the opposite, given how Mrs. Mott felt about Will.

“You should instruct the child not to stare at her elders,” said Mrs. Mott. Before Nell could point out, probably unwisely, that Gracie was only staring
back
, the housekeeper said, “And you might dress her in something presentable if you intend to bring her down. Mrs. Hewitt has callers.”

Nell didn’t bother asking what she was supposed to have done with Gracie other than bring her down, since it was her job to look after her, and she wasn’t about to leave her unattended. Miss Edna Parrish, the octogenarian nursemaid who’d cared for both Viola and her four boys, often helped with Gracie when Nell had other business to attend to, but she preferred to devote her mornings to needlework and her Bible.

“Who are the callers?” Nell asked.

“A male and a female. Common types, rather ill turned out. Irish, from the sound of them. It occurred to me they might be relations of yours—your parents, perhaps.”

“My parents are deceased.” Her mother was, at any rate, and her father may as well be. “I’ve no one else.”

That caught Nell off guard. She groped for a response, thinking,
Don’t let her know about Duncan. Anything but that.

The housekeeper let a few long seconds pass, as if hoping Nell would fill in the silence with some intriguing disclosure, but Nell had learned that little trick, and kept mum.

“I thought Mrs. Hewitt had mentioned a brother,” Mrs. Mott said. “Or did I mishear?”

Nell let out her pent-up breath as silently as she could. “Yes. I mean, no, you didn’t mishear. I have a brother, Jamie. James. Or had—I haven’t seen him in years. Why would you think the visitors are related to me? There are thousands of Irish in Boston.”

“I daresay.” Mrs. Mott’s nose twitched, as if she’d just caught a whiff of something putrid. “But not many who’d have the cheek to walk right up to the front door of a house like this, instead of round the back. Fewer still who’d manage to get themselves served tea in the Red Room.” Turning, she said, “Don’t dawdle.”

“What does that mean—pwesentable?” Gracie asked after the housekeeper had left. “Does it mean like a pwesent?”

“Something like that,” Nell hedged. “I think she meant you ought to wear a fancier frock. But your pinafore is so very pretty, and Nana loves it. Best you stay as you are, I think.”